Factor review: Narrow leadership and its implications – Humble Student of the Markets 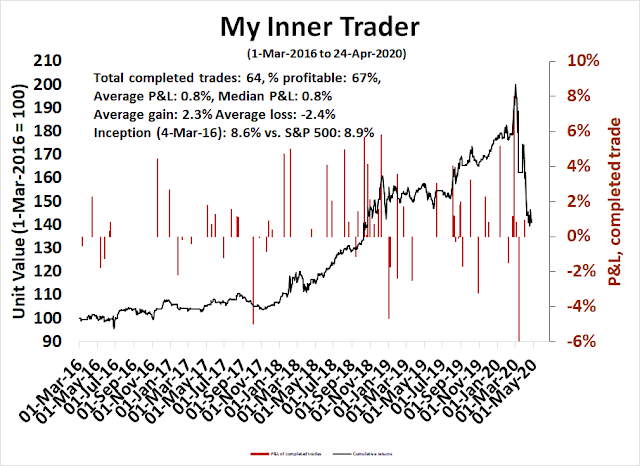 The past few weeks have seen much market volatility and confusion among market participants. One way of cutting through the noise is to see what market factors are leading and lagging.

Our primary tool is the Relative Rotation Graph (RRG). As a reminder, Relative Rotation Graphs, or RRG charts, are a way of depicting the changes in leadership of different groups, such as sectors, countries or regions, or market factors. The charts are organized into four quadrants. The typical group rotation pattern occurs in a clockwise fashion. Leading groups (top right) deteriorate to weakening groups (bottom right), which then rotates to lagging groups (bottom left), which changes to improving groups (top left), and finally completes the cycle by improving to leading groups (top right) again.

The chart of recent factor leadership is shown below. 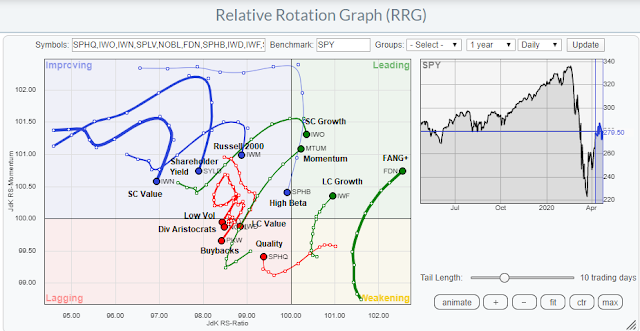 Here is the relative performance chart of the leaders, as shown in the top right leading group quadrant. The winners consist of FANG+, and large and small cap growth. Bringing up the rear among the leadership group is price momentum (bottom panel). 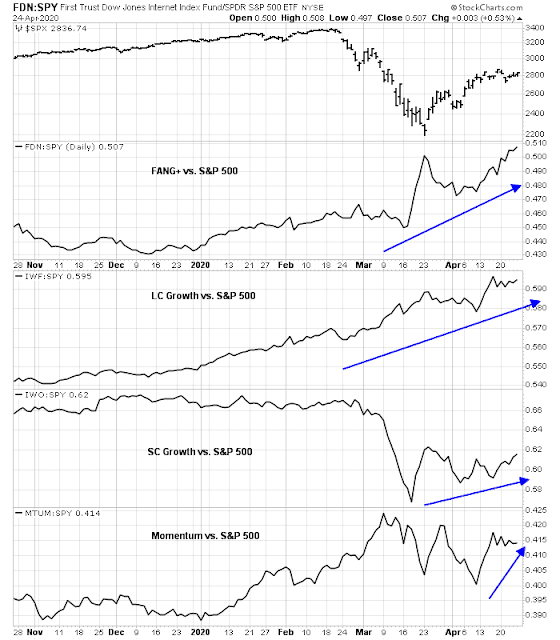 The following factors that had shown some strength, but they are now rolling over.

The remainder are the laggards, which never really gained much traction.

Do you notice a pattern here? Growth stocks, and large cap growth in particular in the form of FANG+ names, have been the leaders. Not much else has worked as a factor selection technique in the past few weeks. In particular, the difficulty shown by the high beta factor even as the market advanced is worrisome. 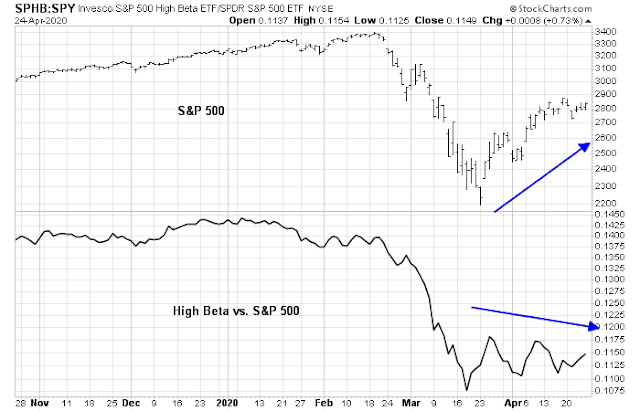 A recent warning came from a Marketwatch article highlighted analysis by Style Analytics, which found notable differences when it looked at past bear markets and rebounds.

Style Analytics, a research firm based in Boston and London, has studied both the crash and recovery, and compared them to other crashes — the global financial crisis, the dot-com bubble and the 1987 crash.

The COVID-19 crash was similar to the crashes from the global financial crisis and 1987 in how stocks of various styles and factors reacted.

But the recovery hasn’t been.

“The only factor to beat the overall market in the current rally is momentum, indicating that investors are doing little more than chasing returns (mostly in tech stocks),” the firm says.

In other words, there has been no change in leadership.

By contrast, value and small cap — normally two of the most outperforming factors in recoveries — are the two worst underperformers during the current rally.

“While this may partially be explained by the fast cash stimulus propping up previous winners, it raises questions about whether the recovery has begun or whether this rally is part of an overall larger market decline yet to materialize,” they write.

The leadership of the Big Three remains unchanged. US over global stocks; Growth over value; and large caps over small caps. This kind of market action suggests that the latest rally is a bear market rally, instead of a rally off a sustainable bottom. Market leadership usually changes during bear markets, and new ones emerge in the fresh bull. That’s not the pattern we are seeing today. 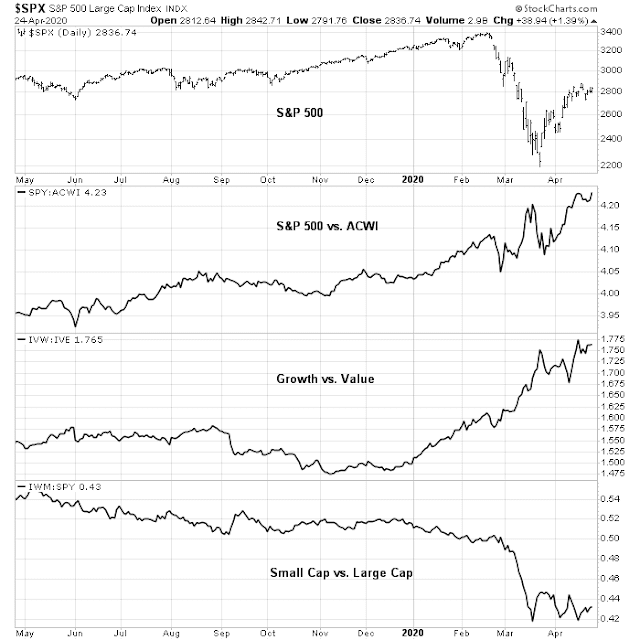 Before everyone gets overly bearish because of the market’s narrow breadth, Goldman Sachs found that typically these periods of narrow breadth lasts a median of three months, and as long as 27 months during the Tech Bubble in 1998-2000. 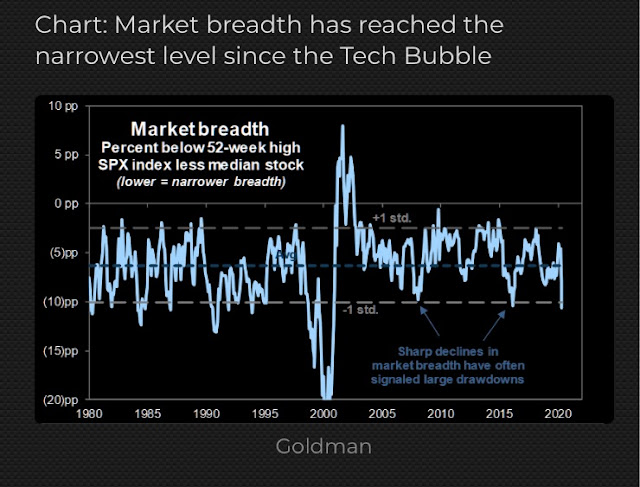 Sentiment models are flashing mixed signals. Short-term AAII (mostly day and swing traders) sentiment is normalizing off a bearish extreme, which is constructive for stock prices. 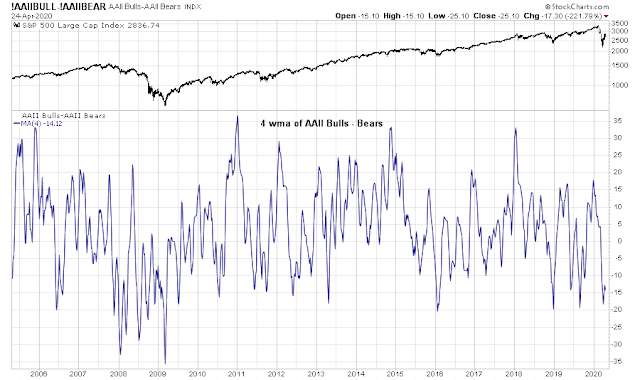 Investors Intelligence sentiment is normalizing in a similar fashion. %Bears is receding off a crowded short level, but readings have not returned to neutral yet. 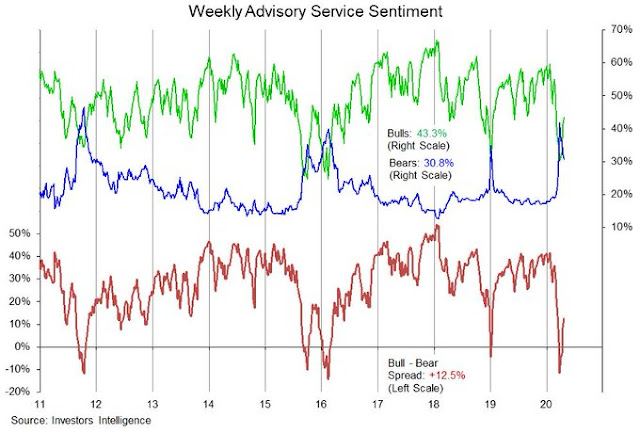 On the other hand, Mark Hulbert worried that newsletter writers were far too quick to jump on the bullish bandwagon. He concluded that the latest rally is likely to be a bull trap. 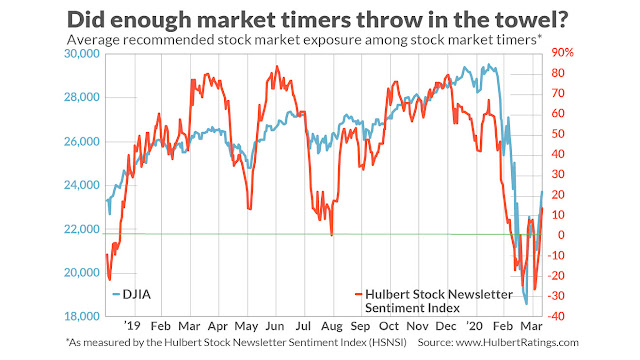 My assessment of sentiment concludes that it is a mixed picture, characterized by short-term positive momentum but at risk of a significant reversal. Hedge fund CTAs are roughly neutrally positioned. Retail traders are recovering from an extreme, which is bullish. The BAML Fund Manager Survey shows global institutions are defensively positioned with high cash and low equity weights, but managers have piled into the US equities as the last source of growth.

From that perspective, the US market’s narrowing leadership, and crowded global manager long position indicate a market that is at risk of a reversal. In that case, the retail momentum players could be seen as late to the party, and trying to pick up pennies in front of a steamroller.

Interpreting sentiment is more an art than science. I would point out there are different sentiment indicators that measure different parts of the market. Sentiment is not monolithic. Here are just a few examples:

The sentiment of all these groups don’t all move together, and keep in mind each group has its unique investment time horizon. Institutions are the elephants. Their moves are glacial, but when they shift, the fund flows are relentless. Hedge funds have turnover rates that can be an order of magnitude higher than institutional investors, and they can really move markets in the short run. Retail sentiment is becoming less important, but retail investors can be important at the margin.

Survey data is less reliable than positioning data because surveys only tell you how a respondents feel about the market, and do not tell you anything about what they are actually doing with their money. Some surveys, such as the BAML Fund Manager Survey, address that problem by asking how the managers are positioned. Others, such as the weekly AAII sentiment and Barron’s Big Money, do not.

There are signs that the market is experiencing bullish exhaustion. The S&P 500, DJIA, and NYSE Composite broke down through rising trend lines just as the indices approached their 50 dma from below. 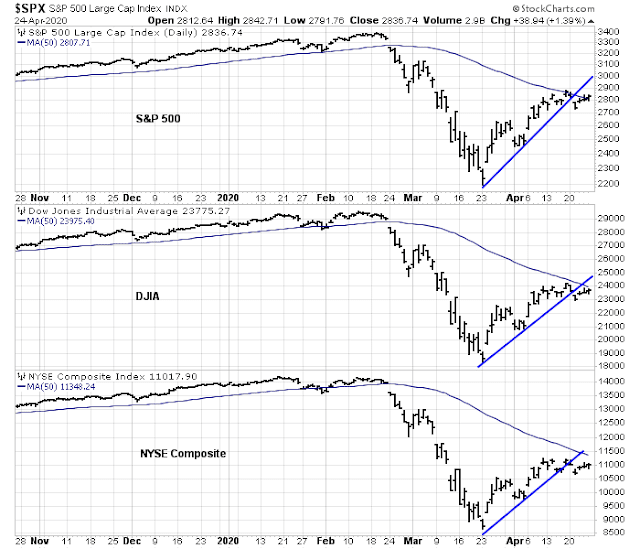 The one major exception is the NASDAQ 100, which broke out above its 50 dma and remains in a rising channel.

Looking to the week ahead, the short-term outlook presents a mixed picture despite the weight of intermediate term bearish evidence. The bulls can highlight a possible bull flag that is forming, and about to break up. The bears can point to the negative divergence from the NYSE Advance-Decline Line, as well as a daily stochastic that is recycling from an overbought condition, which is a sell signal. 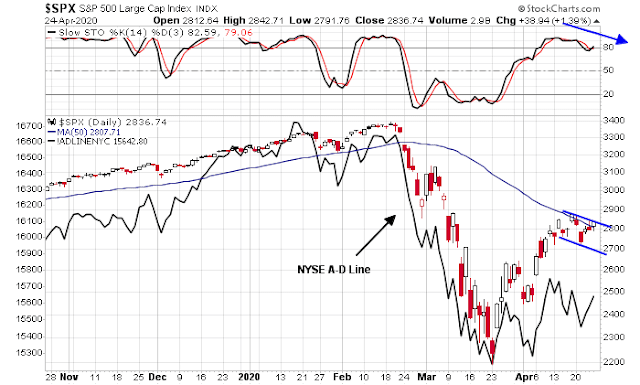 The analysis of the top five sectors presents a picture of narrow but bullish leadership that is exhibiting positive momentum. As a reminder, the top five sectors comprise nearly 70% of index weight, and the market cannot significantly move up or down without the participation of a majority of these sectors. Three of the five sectors, Technology, Healthcare, and Consumer Discretionary, are either in bullish relative uptrends or they are staging relative breakouts. These three strong sectors represent 48.3% of index weight and their strength cannot be ignored. However, the Consumer Discretionary chart (bottom panel) is reflective of the strength of AMZN. The equal weighted relative performance line (in green), which discounts the weight of AMZN, is far weaker than the cap weighted chart. From a longer term weekly perspective, last week was an inside week, indicating that a big move may be coming. RSI momentum has been falling, and appears to be rolling over. 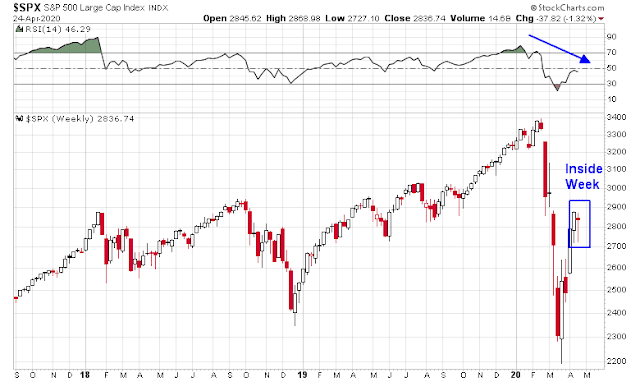 In other words, much depends on the earnings reports the FANG+ stocks next week of Facebook and Microsoft (Wednesday), and Apple and Amazon (Thursday). 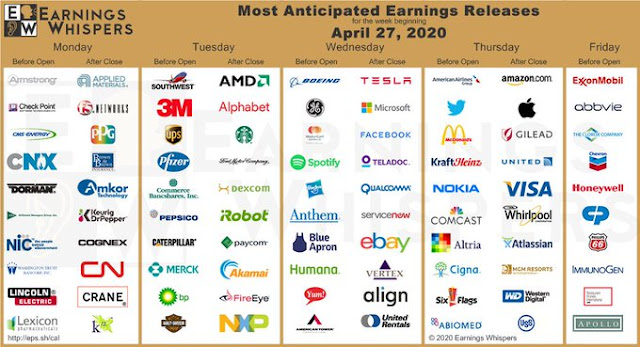 In conclusion, signs are growing that the bulls are starting to lose control of the tape. Despite my longer term reservations about this market, this does not necessitate an immediate retest of the March lows. Any bullish break could resolve itself with a period of sideways and choppy consolidation. If I had to guess, I would assign a 30% chance of an immediate downdraft and retest in the next month, and 50% chance of choppy consolidation, and 20% chance that the bulls will push prices higher.

My inner investor’s portfolio is in a position of maximum defensiveness. A discussion with a reader led to an interesting idea of writing a collar, where the investor sells a call option to finance the purchase of a put option to guard against the possible retest of the March lows. My inner trader remains short the market, but he is keeping an open as to different possibilities.

65 thoughts on “Factor review: Narrow leadership and its implications”