The makings of a primary low – Humble Student of the Markets

Mid-week market update: Did the Economist do it again with another contrarian magazine cover indicator? At the top of the market, their issue cover was entitled “Big tech’s $2trn bull run”. Last weekend, their cover featured a “closed” sign on the earth.

The market staged an upside breakout through a falling trend line yesterday, and the upside held today. Notwithstanding the Bernie Sanders induced last hour weakness, it managed to put together two green days in a row, which has not happened since February 11-12. This market action has all the makings of a primary low.

The contrarian in me is worried. I am part of the consensus that this is a bear market rally, whose scenario calls for a retest of the lows, which may not necessarily be successful. What could possibly go wrong?

The magnitude of yesterday’s gargantuan rally was last exceeded in 1933. Though the sample size is relatively small, Bespoke’s historical analysis of such episodes has not been friendly to the bulls. 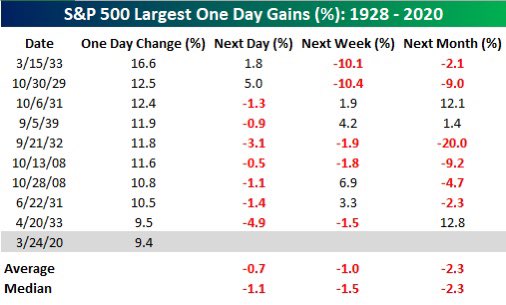 Why I am leaning bullish

On the other hand, the short-term bull case is underpinned by improving internals, and favorable market positioning. The most bullish opens up the possibility is a V-shaped rebound, which would confound everyone expecting a bear market rally that stalls and retests the old lows. Yesterday’s rally started the clock a the Zweig Breadth Thrust (ZBT) buy signal. The ZBT Indicator recycled off its oversold reading, and it has nine more trading days to reach an overbought condition. If it does in the short time window, it would qualify as a ZBT buy signal indicating positive price momentum. While I am open to all possibilities, I am watching the indicator, but I am not holding my breath for that outcome. 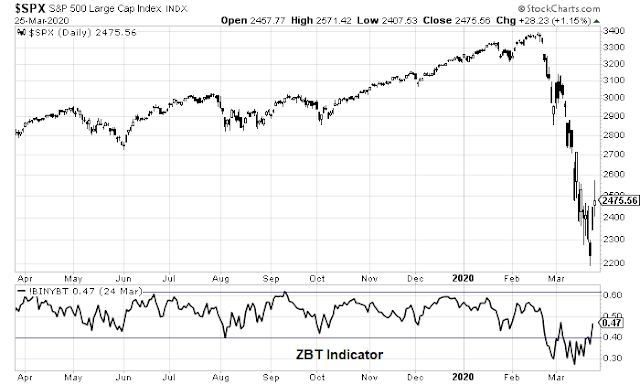 As well, market internals have been turning up, even before the latest rally began. Factor returns, as measured by the high beta to low volatility pair trade, and Callum Thomas’ coronavirus pairs consisting of a cruise line (RCL) vs. a funeral home (SCI, but he really had to dig deep to find that pair), and global airlines (JETS) to Chinese healthcare (KURE), are all signaling a return of risk appetite. 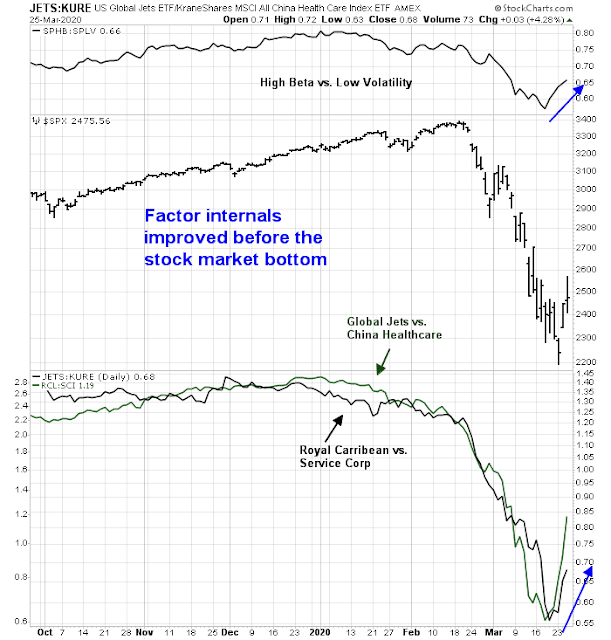 In addition, Investors Intelligence sentiment is turning more constructive. The number of bears have finally spiked, and they now exceed bullish sentiment. These conditions form the prerequisite for a market bottom. 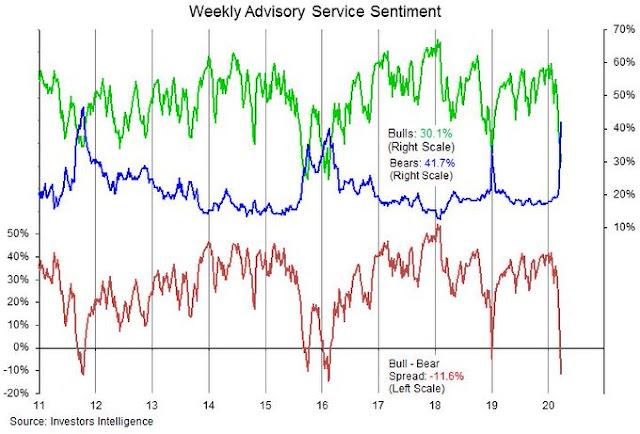 The Heisenberg Report recently featured the analysis by Charlie McElligott at Nomura, which indicated that the Fed is effectively building a short volatility position in its book.

The Fed is “not just acting as liquidity-, short-term lending- and USD funding-provider of last resort, but also now as the ‘chief risk-taker and CIO’”, McElligott goes on to say, adding that as of Monday, the Fed resumed building a ‘short volatility’ position”.

McElliogott explained the Fed’s short vol trade as not only just supplying liquidity to the market, but trying to narrow credit spreads through their actions in the credit markets. This does not mean, however, that the Fed is actively trading equity volatility derivatives.

We actually see the Fed in the game of not simply suppressing the risk-free rate, and thus term premium, as they did last time, but now buying spread product (beyond MBS alone) with risk assets outright and through the new SPV, it’s reasonable to believe that investors will ‘reverse engineer’ the Jay Powell playbook noted above, and go with their muscle memory from [the] Fed ‘short volatility positioning’ prior conditioning

Indeed, something odd has been going on with volatility in the past few days. The VIX had been falling even as stock prices fell, which could indirectly be attributable to the Fed’s actions. In addition, one helpful sign for equity and risk appetite bulls is the recent collapse in UST volatility. It is difficult to envisage market stabilization without signs of falling volatility in the risk-free asset. 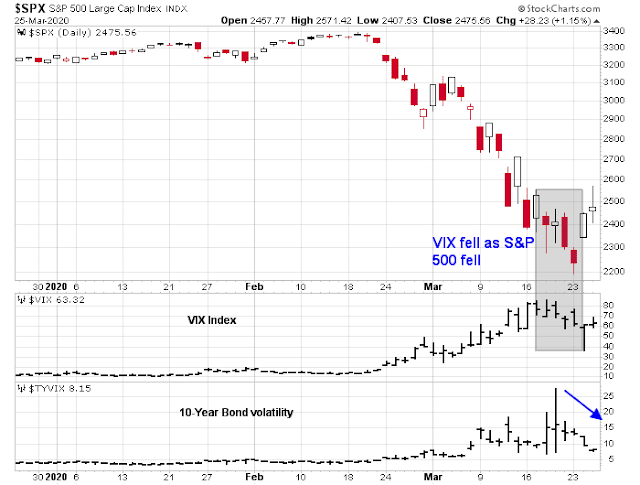 The Fed’s actions have been mostly successful in stabilizing the credit markets. Do you want to fight the Fed?

Lastly, Goldman Sachs estimates that pension funds need to buy $214 billion in equities as part of their month and quarter end rebalancing, which should put a bid in the equity market starting next week.

My inner investor remains defensively positioned. Subscribers received an email alert yesterday that my inner trader had dipped my toe in on the long side. Initial resistance can be found at about 2650, and secondary resistance at about 2790.

The next test of market psychology will occur tomorrow morning with the closely watched initial jobless claims report. There have been numerous reports of surges of jobless claims all over the country, to the extent that state websites are crashing from the load. Initial claims are expected to explode to between 2 and 3 million. Bloomberg reported that unemployment claims spike to 929,000 in Canada. Given the roughly 10 to 1 ratio in population, this translates to 9 million in initial claims, so be prepared for an upside surprise. I will be closely watching this report, and the subsequent market reaction.

52 thoughts on “The makings of a primary low”