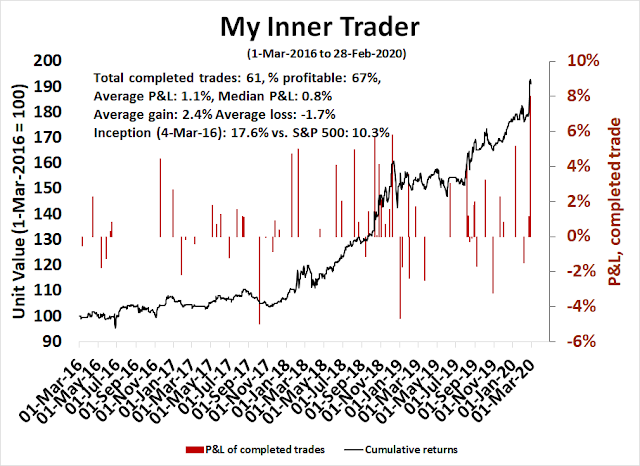 This time last week, I was cautiously bearish (see Correction ahead?), but I never imagined that stock prices would crater as far as they did. My social media feed is full of narratives of how unprecedented and insane the market decline has been. One such example is the comparison of the “coronavirus crash” to other major market events in the last 100 years. 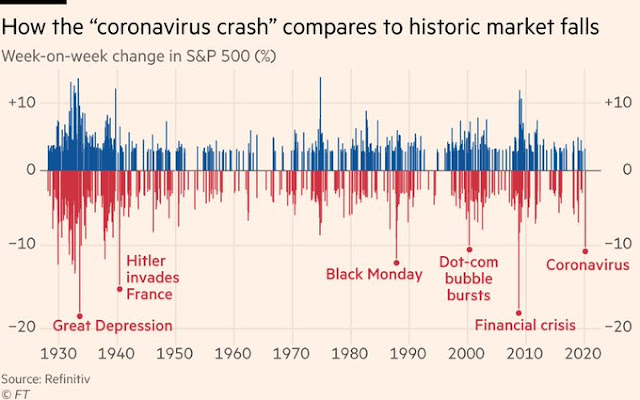 This week, rather than just dwell on how extreme last week’s market action was, I would instead like to put on a technical analyst hat and consider the following three mystery daily charts. Which would you buy, or sell? Which is your favorite? Did you wish you had bought one or all of time in the past two weeks? 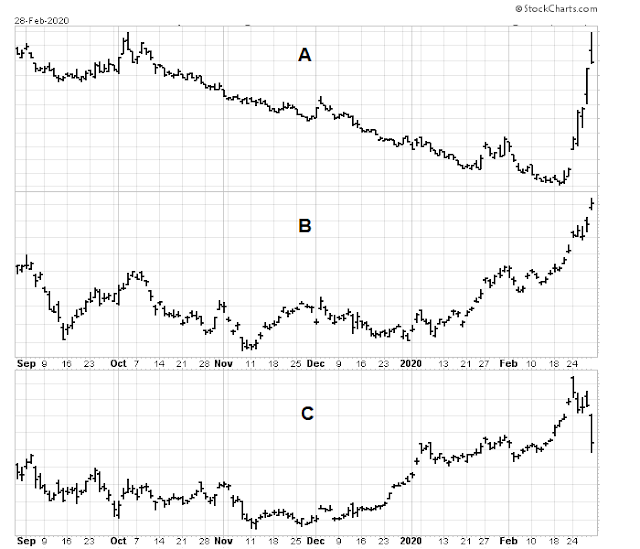 The analysis is far more revealing about market internals and likely future action than more hand wringing about how oversold and washed out the stock market has become.

Answer is below – no peeking now!

Here are the mystery charts, revealed. 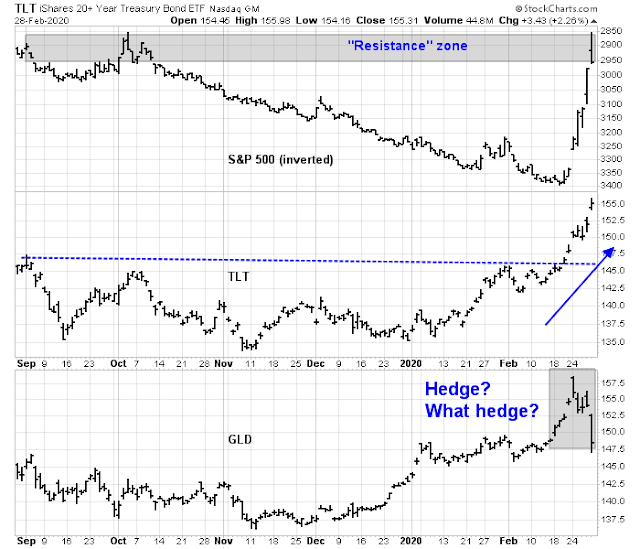 The top chart is the inverted S&P 500. Sometimes analyzing a chart upside can be more revealing than seeing it right-side up. The upside down chart shows the index in a parabolic and extended move. The index is now encountering a “resistance” zone where the “rally” may stall. If you own stocks, do you feel a bit better about that analysis now?

The middle chart is the price of the long Treasury bond, as represented by the ETF TLT. It is behaving more or less in a way that you would expect an equity market hedge to behave. As stock prices weakened, TLT staged an upside breakout about 10 days ago. Even so, there were some anomalous signals from the bond market that could give equity bulls a ray of hope (more on that below).

The bottom chart is gold. As expected, gold prices shot up when stocks cratered, but a funny thing happened. Gold fell, which is not what you expect an equity hedge to do. Joe Wiesenthal at Bloomberg explained the anomaly this way:

Earlier this week I wrote about gold, and how it’s a good volatility hedge, but only up to a point. It stops being a good volatility hedge when you start getting anxious about managing cash flow and paying your bills. Since the world runs on U.S.-dollar denominated liabilities, when the bill collector (or the tax collector, or the margin clerk, or the landlord) comes knocking, you need cash. And selling gold might be one of your only options. We might be seeing a little bit of that effect emerge. This morning markets are selling off again, and Treasuries are surging, and yet gold is red.

In other words, when the margin calls arise and all correlations go to 1, gold prices will get taken down. Such episodes are usually seen at the tail-end of market sell-offs, when the margin clerks take over and price insensitive selling takes over. That’s usually a signal of a short-term bottom.

The market is obvious very oversold. Only 0.4%, or two stocks, in the S&P 500 are above their 10 day moving average. There have only been two similar episodes in the last 5 years, and both saw the market stage relief rallies almost immediately. 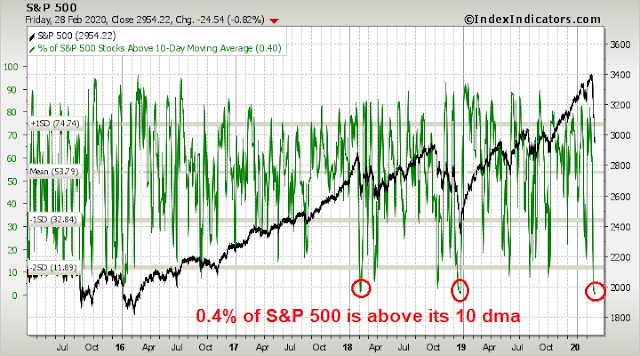 Friday’s market action may be the signals of a possible climactic reversal by tracing out a hammer candlestick on Friday. The market gapped down and fell hard at the open. It proceeded to chop around and strengthened at the end of the day with a close that was significantly higher than the open. While hammer patterns are often signs of selling exhaustion, some doubt could be cast on the pattern because it occurred on a Friday. The end of day rally could be the result of short covering by traders who did not want to enter the weekend with a short position because of event or announcement risk.

One reason for the late day rally was the central bank response to the market’s risk-off tone. Global central bankers have pumped billions of liquidity into the financial system, and there were rumors of an announcement of coordinated easing on the weekend. 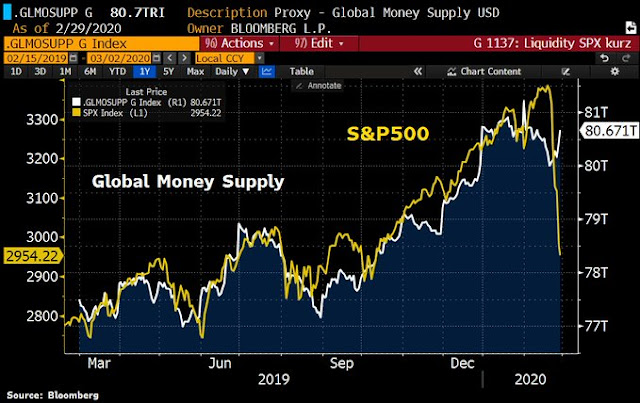 This possible price reversal that needs to be confirmed by market strength on Monday. Otherwise, all bets are off.

The astute technician can find selected green shoots for the bulls if he looked in the right places. I pointed out yesterday that the cyclically sensitive copper price managed to hold support, which is constructive for signs of cyclical strength.

As well, has anyone been watching the yield curve? The 3m10y had inverted, which was freaking out some traders worried about a recession. But even as stock prices cratered, did anyone notice that the 2s10s and 10s30s were steepening? A steepening yield curve, even when bond prices are rallying (and therefore yields are falling, see above TLT mystery chart), is usually a signal that the market expects accelerating growth. 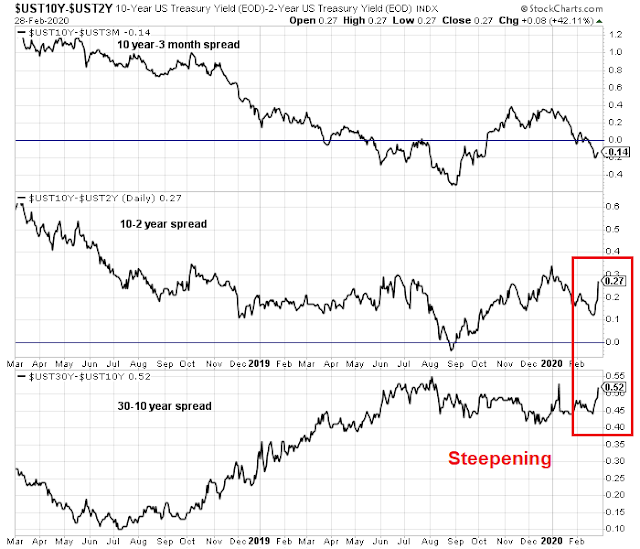 The Fear and Greed Index is now below 20, which is a necessary but not sufficient condition for a market bottom. 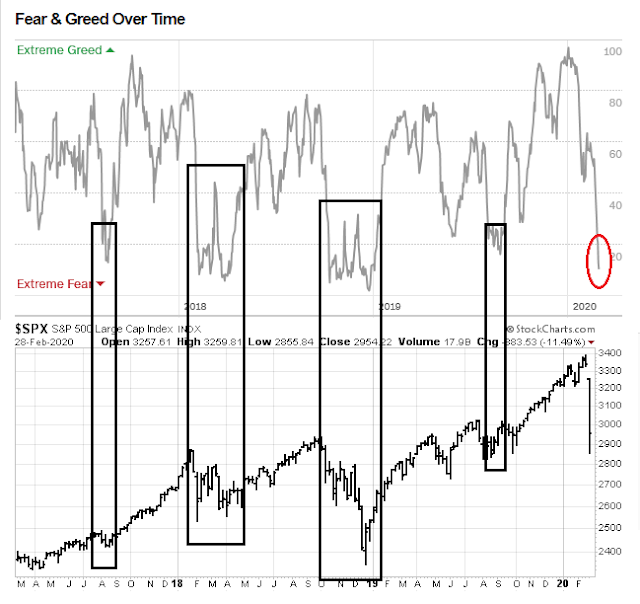 In fact, SentimenTrader‘s Fear and Greed proxy reached a reading of 0 on Friday. Past episodes have been resolved with strong positive returns. 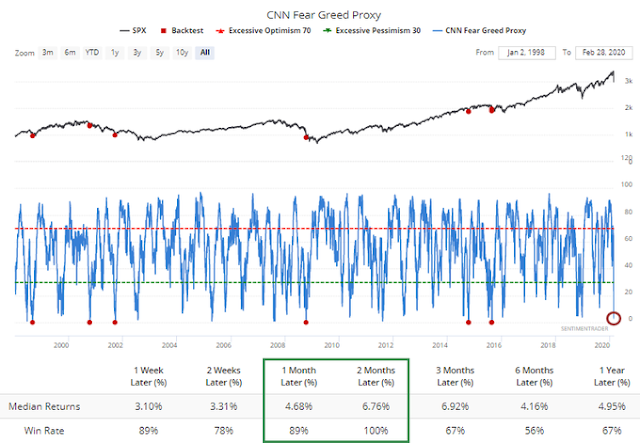 I could go on and on about how stretched fear and technical indicators are to the downside. The blogger Macro Charts wrote this weekend that his core indicators are all “max oversold”. His analysis is well worth reading in its entirety, but here is the summary:

Rob Hanna at Quantfiable Edges observed that his Capitulative Breadth Index (CBI) was on track to spike to 39 on Thursday, where normally a CBI of 10 or more is a buy signal. He went on to list the occasions when CBI was over 20. I have highlighted the three instances when CBI was 30 ore more. Though the sample size is extremely small, my unscientific small sample conclusion is, unless you believe that this is 2008 all over again (and we haven’t had a Bear Stearns or Lehman Brothers failure that could spark a panic), a relief rally is imminent.

The Trend Asset Allocation Model has turned bearish. This is a trend following model that is slow at turning points, which is a feature, not a bug. My inner investor was already neutrally positioned before the stock market carnage, and the decline has already naturally lowered the equity weight in his portfolio and raised his bond weight. He will maintain a risk-off stance, and he expects to reduce risk on any equity rally that may occur in the near future.

The market may bounce next week, but the rally is unlikely to be durable. One worrisome sign for the bulls is hedge funds are still bullishly positioned. The fast money have not capitulated out of their long positions. The Commitment of Traders report (from Tuesday) shows that large speculators, which are mostly hedge funds, are still net long high beta NASDAQ 100 futures. 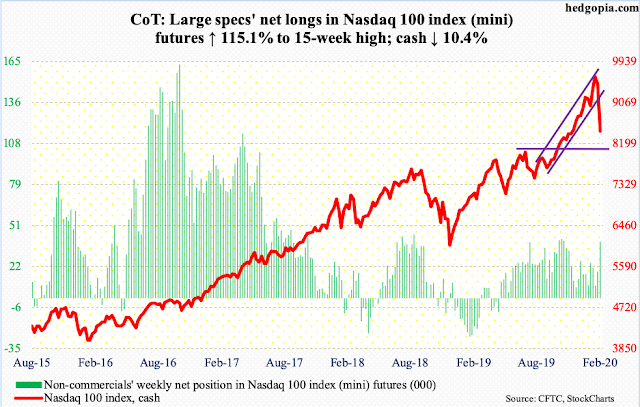 Subscribers received an email alert on Thursday that my inner trader had dipped his toe in on the long side of the market. My inner trader is bullishly positioned, but with a lower than normal position size because of high market volatility.

An analysis of the hourly S&P 500 chart shows that both the 5 and 14 hour RSIs have recycled, which are tactical buy signals. It is difficult to set an upside target as there are many downside gaps that could be filled. A reasonable guesstimate would be a 50% retracement of last week’s move at 3125. 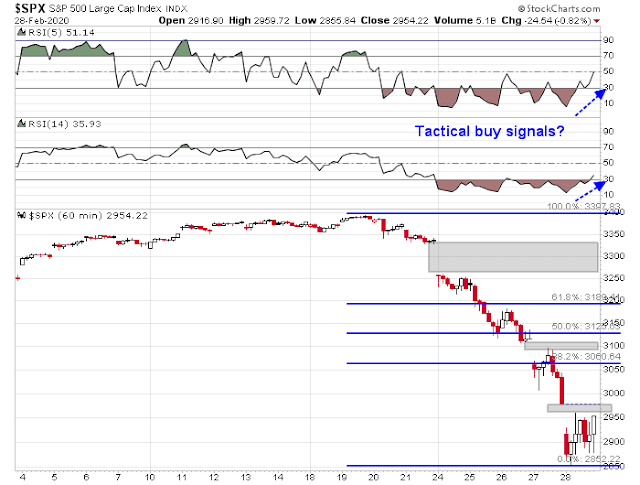 Needless to say, there are no guarantees in such an uncertain environment.