Where have you gone, Vol-a-tility? – Humble Student of the Markets

Mid-week market update: I have been writing in these pages about the remarkable muted equity market volatility. Indeed, Luke Kawa observed on Monday that realized volatility had fallen to historical lows. 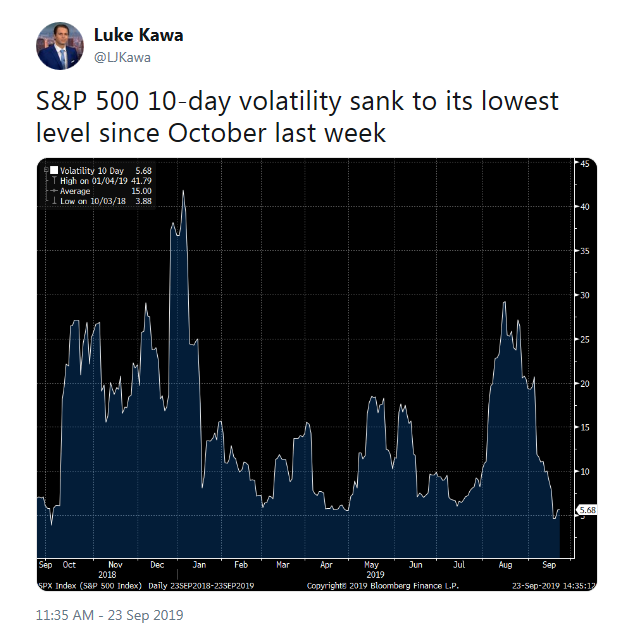 Recent developments indicate that volatility may be about to return to the markets. This reminds me of the lyrics of a song that I vaguely remember from my youth:

Where have you gone, Vol-a-tility?
A nation turns its lonely eyes to you…
Woo woo woo…

Stock prices opened Tuesday on a slight upbeat note, until Trump made a highly assertive speech at the United Nations on trade that was directed mainly at China. Even China’s latest conciliatory gesture to allow limited tariff exemptions for the purchase of American soybeans failed to move the markets. 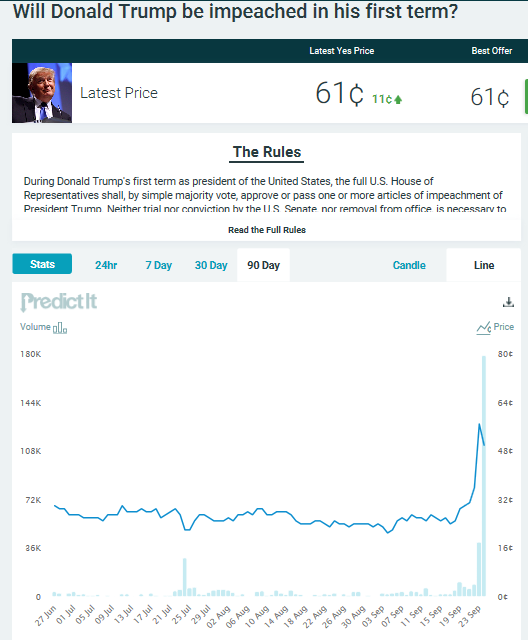 I will let readers make their own political judgments about the current episode, but it is clear that investors cannot come to any definitive conclusions about what might happen next based on political history (n=2). However, Trump has shown a pattern of deflecting criticism by re-focusing the news cycle when he is threatened to two familiar topics that are under his control, border security and trade. Moreover, the impeachment inquiry could prove sufficiently distracting that substantive trade discussions becomes all but impossible for the Trump administration. This environment can only mean one thing for the markets.

While the market could certainly be volatile with prices going upwards, my inclination is to expect a bearish bias in the days and weeks ahead.

The following chart of the stock/bond ratio, which is an indicator of risk appetite, tells the story. The SPY/TLT ratio has shown an up-and-down pattern which were marked by overbought and oversold readings. While the fit isn’t perfect, the market was already undergoing a risk-off phase even before the latest news hit the tape. If history is any guide, this will not bottom out until the 14-day RSI becomes oversold. 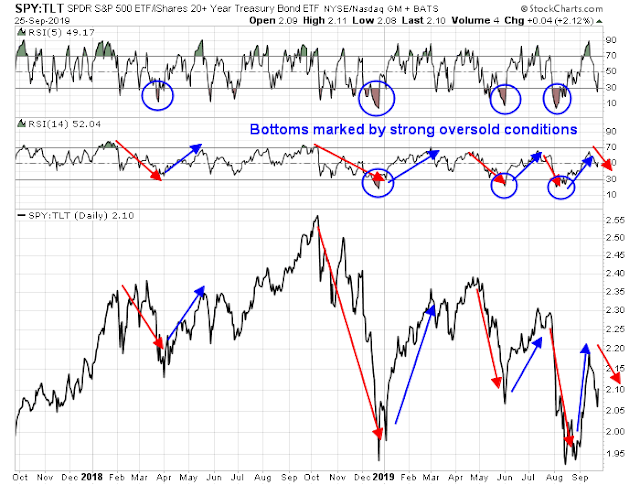 The weekly stochastic is overbought and it is poised to recycle to neutral. Past episodes have been effective sell signals. 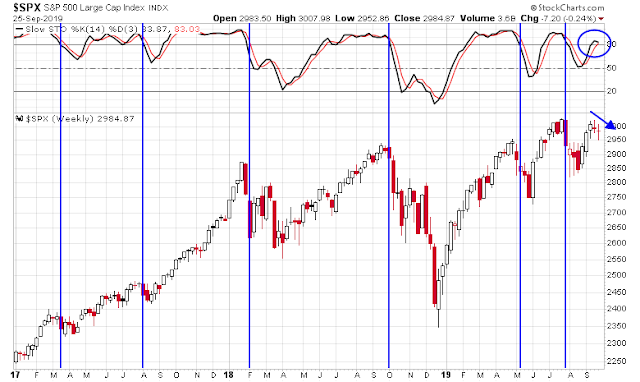 As well, my monitor of the top 5 sectors that comprise nearly 70% of index weight is also telling a bearish tale. Virtually all sectors are exhibiting negative relative strength. It would difficult for the market to rally without a substantial participation of most of these sectors. 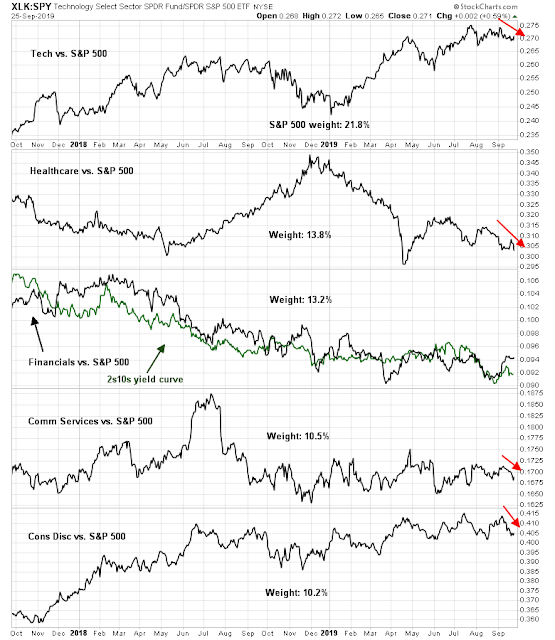 The market is also facing seasonal headwinds. Ryan Detrick observed that the market is entering a period of negative seasonality until Thanksgiving. 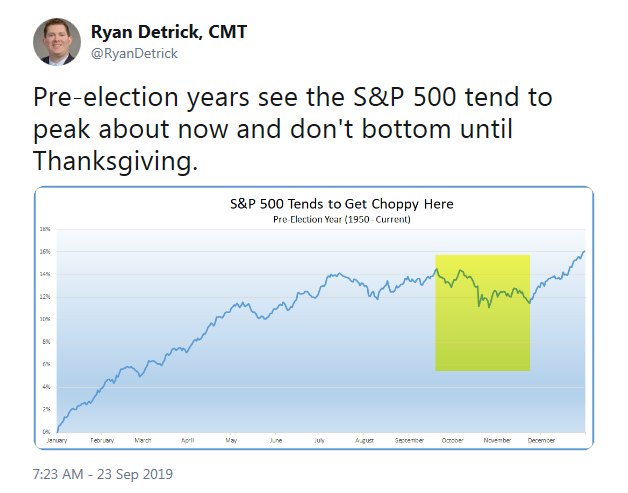 From a tactical perspective, short-term momentum was approaching a near oversold condition as of Tuesday night’s close, which showed a recovery today. 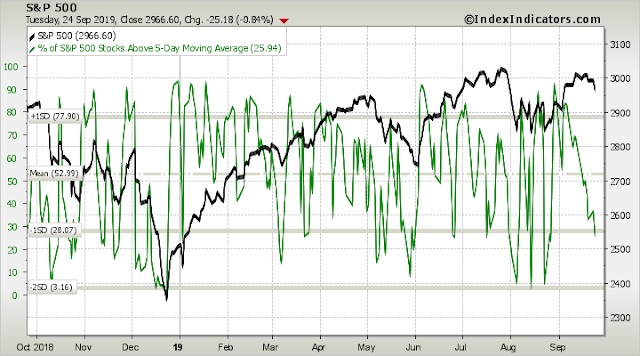 The market successfully tested its 50 day moving average, and support at about 2960. However, the daily stochastic has turned south, which is a bearish signal.  We may see a short-term rally back to the declining trend line in the next couple of days. 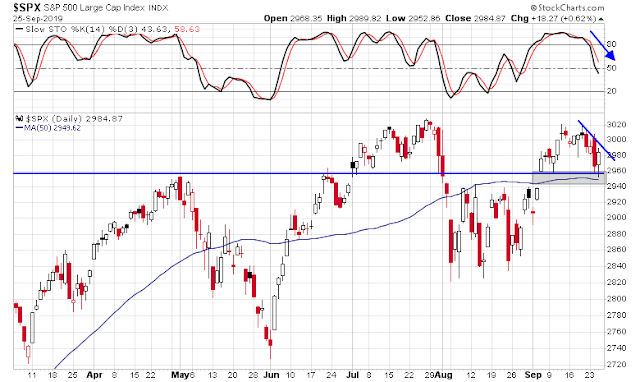 My inner investor remains defensively positioned. My inner trader is short, but a 1-3 day bounce could happen at any time. He is prepared to add to his short positions should the market stage what would be expected to be a brief relief rally.

4 thoughts on “Where have you gone, Vol-a-tility?”