Buy the dips, sell the rips – Humble Student of the Markets

Mid-week market update: The SPX has been mired in a trading range for several weeks. Even as the market is once again testing resistance, it is displaying a mild positive RSI divergences, which argues that there may be further minor upside to resistance at about 2950. 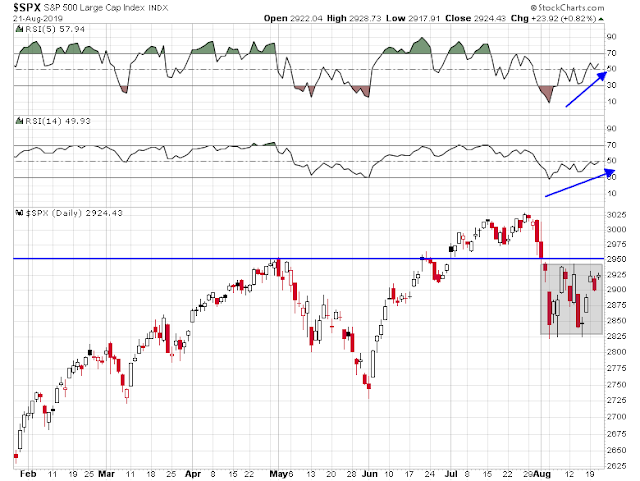 Nevertheless, this pattern argues for a trading strategy of buying the dips, and selling the rips.

Retest of lows ahead?

In addition to the apparent range-bound behavior, analysis from Urban Carmel argues for a near-term retest of the lows. The index had been down for three consecutive weeks last week before staging a relief rally. Such episodes are usually followed by a decline to retest the previous lows.

There are plenty of possible bearish catalysts in the next few days. First up is Jerome Powell’s speech at Jackson Hole this Friday. The market is pricing in 2-3 rate cuts until year-end, and the risk of disappointment is high.

Since his “mid-cycle adjustment” remarks after the last FOMC meeting, retail sales has been robust, job growth, job growth slightly disappointing but still strong, and inflation is running a little hot. Powell will have his hands full in bringing the rest of the FOMC along if he wants to continue cutting rates.

We’re likely to have a second half of the year that’s much closer to 2% growth. When we have a low unemployment rate, a relatively low inflation, unless that changes—and it may change—I don’t see a lot of need to take action.

I don’t think we’re headed towards a recession right now. When I look at the data coming in, I see solid domestic momentum that points to a continued economic expansion. The labor market is strong, consumer confidence is high, and consumer spending is healthy.

But considerable headwinds, like weaker global growth and trade uncertainties, have emerged – and they’re contributing to this fear we see in the markets that a downturn is right around the corner. So one thing I’m looking closely at is whether the mood gets so out of sync with the data that the fear of recession becomes a self-fulfilling prophecy.

My colleagues and I on the Federal Open Market Committee recently lowered the federal funds rate by 25 basis points. Speaking only for myself, I do believe this was an appropriate recalibration of policy in response to the headwinds we’re facing – along with inflation rates that continue to come in under our 2% target. However, I should stress that my support for this cut is based around my desire to see our economic expansion continue – not because I see an impending downturn on the horizon.

The 2s10s yield curve has flattened to 1 basis point, and risks are rising. It is difficult to see how Powell could satisfy market expectations.

Then there’s the wildcard presented by the G7 summit this weekend. Recall that at the last G7 summit, Trump refused to approve the communique, left the meeting early, got into a trade tiff, and insulted his Canadian host. 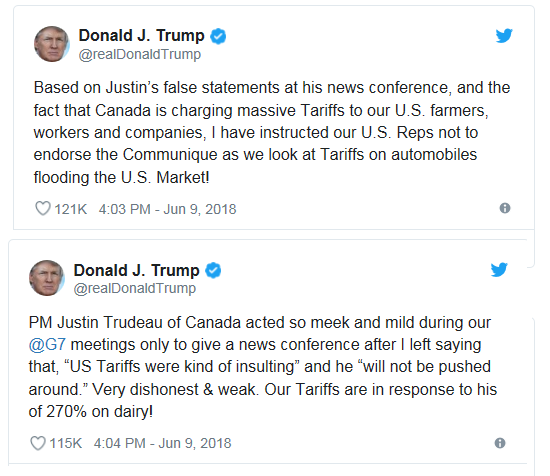 US trade representative Peter Navarro went further to inflame tensions, “There’s a special place in hell for any foreign leader that engages in bad faith diplomacy with President Donald J. Trump and then tries to stab him in the back on the way out the door. And that’s what bad faith Justin Trudeau did with that stunt press conference. That’s what weak, dishonest Justin Trudeau did, and that comes right from Air Force One.”

As we approach this weekend’s summit, US trade tensions with the EU could be front and center. On the other hand, Japanese negotiators are in Washington this week for trade talks this week. Should the discussions be fruitful, it could lay the groundwork for a meeting or even a trade agreement between Trump and Abe on the sidelines of the G7.

In addition, British PM Boris Johnson is making the rounds in Berlin and Paris ahead of the G7 summit. He is trying to secure a Brexit agreement without an Irish backstop. His chances of success are nil to none, and Bloomberg reported that a no-deal Brexit is now their most likely scenario. Expect fireworks from BoJo this weekend.

Tactically, I expect some more upside tomorrow. Today’s CBOE put/call ratio is an astounding 1.30, which indicates skepticism about the market advance. 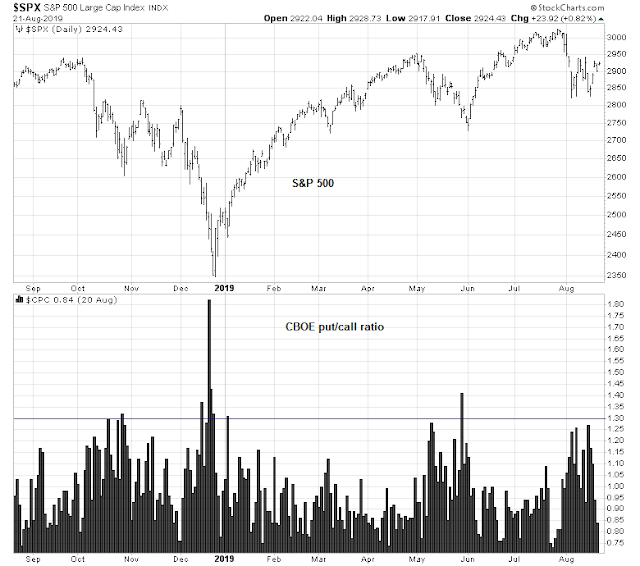 My inner trader is still long, but he is lightening up his positions at these levels.

3 thoughts on “Buy the dips, sell the rips”