Will the Fed cut after the trade détente? – Humble Student of the Markets

The results out of the Trump-Xi summit were slightly better than market expectations. Not only do we have a trade truce, a suspension of escalation, but Trump promised that American companies can sell to Huawei.

Now that we have achieved a detente of sorts, the CME’s Fedwatch Tool shows the market is still discounting a 100% likelihood of a quarter-point rate cut at the July FOMC meeting, and a 21.4% chance of a half-point cut. 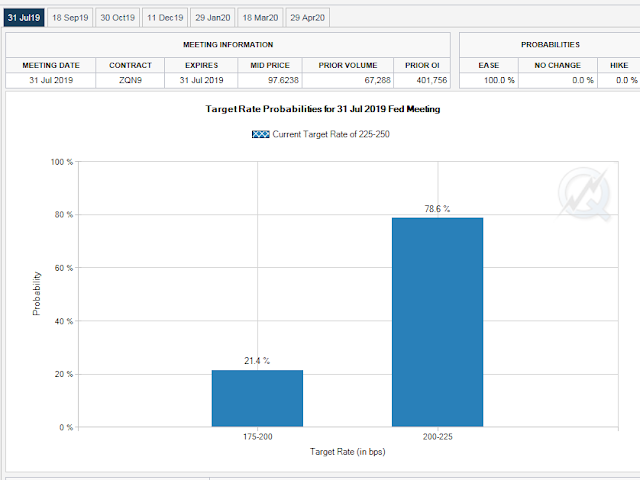 Is this for real? Will the Fed disappoint the markets?

Why the Fed should cut

Let’s consider the factors that argue for and against a cut. The main reasons for a cut is the weakness of the US and global economy. In addition, the trade war is not over, and the Osaka meeting only achieved a truce while tensions remain high. This creates a high level of uncertainty that is undermining confidence which could tank the economy even as it undergoes a soft patch.

Economic growth is slowing. The Atlanta Fed’s Q2 GDPNow is tracking at 1.5%, while the New York Fed’s nowcast is at 1.3%. That’s quite a slowdown compared to the red hot 3.2% growth rate in Q1.

In addition, global PMIs have been falling all around the world, which is indicative of a synchronized global slowdown. 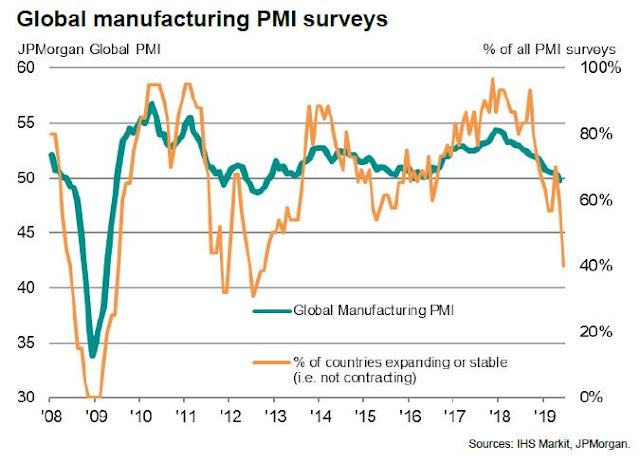 CEO confidence has also been falling rapidly. While it is relatively easily to measure the first-order effects of tariffs, estimating the second-order effects of a loss of confidence is less precise. However, the historical record does show that current readings point to a possible air pocket in growth ahead. 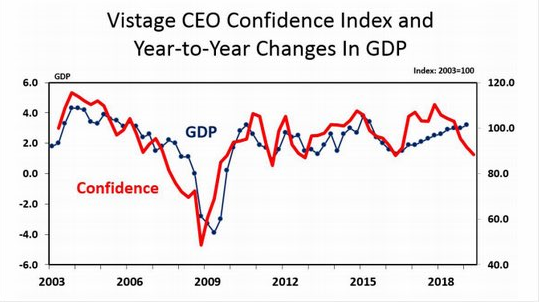 In his latest speech, Jerome Powell voiced concerns over global growth and how the loss of confidence may be leading to a slowdown in business investment:

Let me turn now from the longer-term issues that are the focus of the review to the nearer-term outlook for the economy and for monetary policy. So far this year, the economy has performed reasonably well. Solid fundamentals are supporting continued growth and strong job creation, keeping the unemployment rate near historic lows. Although inflation has been running somewhat below our symmetric 2 percent objective, we have expected it to pick up, supported by solid growth and a strong job market. Along with this favorable picture, we have been mindful of some ongoing crosscurrents, including trade developments and concerns about global growth. When the FOMC met at the start of May, tentative evidence suggested these crosscurrents were moderating, and we saw no strong case for adjusting our policy rate.

Since then, the picture has changed. The crosscurrents have reemerged, with apparent progress on trade turning to greater uncertainty and with incoming data raising renewed concerns about the strength of the global economy. Our contacts in business and agriculture report heightened concerns over trade developments. These concerns may have contributed to the drop in business confidence in some recent surveys and may be starting to show through to incoming data. For example, the limited available evidence we have suggests that investment by businesses has slowed from the pace earlier in the year.

The combination of these factors all argue for a precautionary, or insurance, rate cut.

Why the Fed should not cut

One of the arguments for a rate advanced by the dovish regional presidents such as Neel Kashkari and James Bullard is the subdued nature of inflation. The Dallas Fed maintains a series called trimmed mean PCE, which is PCE after throwing out the highest and lowest elements. Trimmed mean PCE is said to be a more stable measure than core PCE, which excludes the volatile elements of food and energy.

However you measure it, the monthly annualized core PCE and trimmed mean PCE are well above the Fed’s target of 2%. While the year/year rate of core PCE has been stable at 1.6%, trimmed mean PCE has been at 2.0% for the last two months. These readings do not support the case for monetary easing based on low inflation. 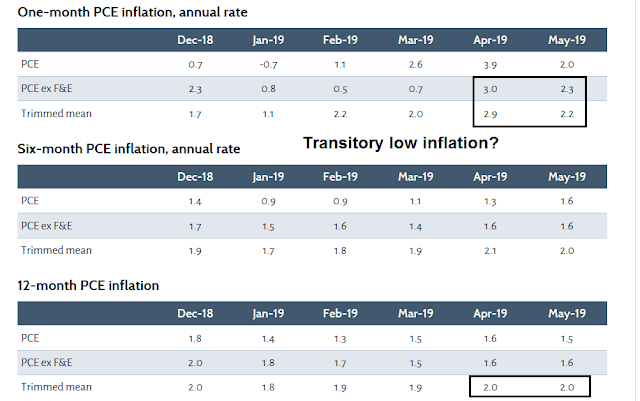 However, I would argue that it is the uptick in inflation that is transitory. Historically, the Fed has faced pressure to raise rates whenever the % of times in the last 12 months that the annualized core PCE has exceed 2% is greater than 50%. As the chart below shows, inflationary pressures have been easing. While they have edged up a little, current conditions can hardly be described as uncontrolled runaway inflation. At a minimum, the Fed should be on pause, and a slight easing bias would not be unusual under the circumstances. 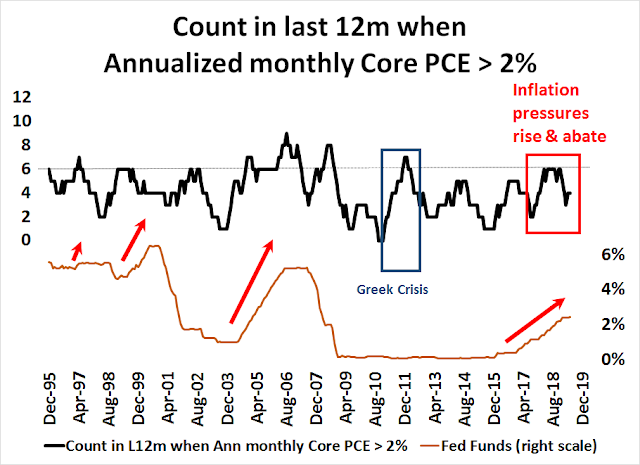 The upcoming Jobs Report this Friday will be another crucial data point in the dove-hawk debate at the Fed. Another big miss like the May report will solidify the case for a rate cut.

Historically, initial jobless claims has either slightly led or been coincidental with the unemployment rate. Since initial claims during the survey week for the June report missed expectations, I am inclined to forecast a slight miss on NFP. 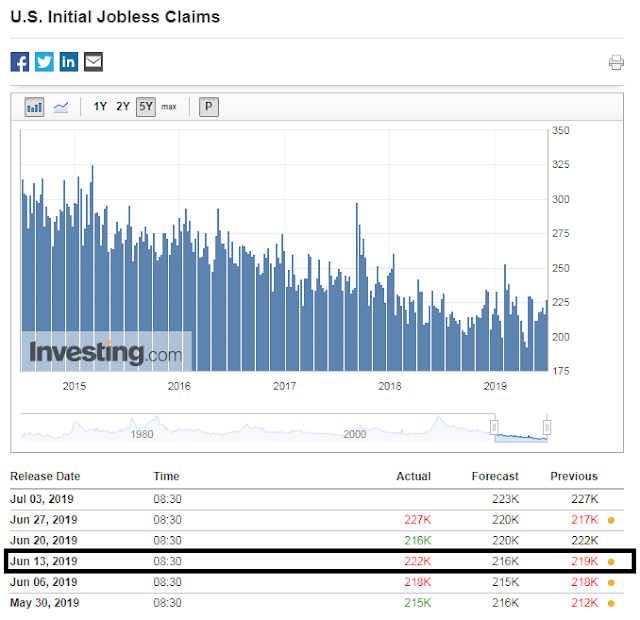 I will also be watching the evolution of temp jobs, which has historically led NFP. The quits to layoffs rate, which is reported in the JOLTS and not the NFP report, has also shown a similar leading relationship. There are some early signs of softness in both temp jobs and quits to layoffs. If the economic soft patch continues, I would expect the weakness in these two indicators to become even more evident. 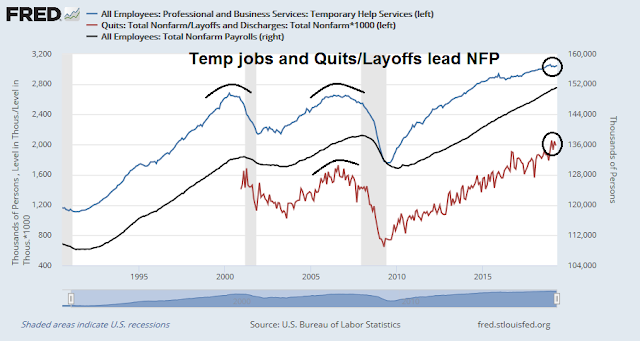 In conclusion, I expect the data to be supportive of a July quarter-point rate cuts. As for market expectations of two more quarter-point cuts by the December meeting, they will be no slam dunks. The Fed will be data dependent, and it will be a question of how the economic and confidence outlook evolves.

3 thoughts on “Will the Fed cut after the trade détente?”