Mid-week market update: Stock prices have been rallying as it hit a trifecta of good news. First, a compromise seems to have been made on the avoidance of another government shutdown. As well, Trump has been making encouraging noises about a US-China trade agreement. Either both sides could come to an understanding on or before the March 1 deadline, or the deadline will be extended, which is a sign of progress. Should the announcement of a definitive time and date of a Trump-Xi meeting, that would be an encouraging signal that an agreement has been made, and the formal signing ceremony would occur at the summit.

Lastly, Reuters reported that the Cleveland Fed President Loretta Mester stated the Fed is finalizing plans on scaling back or completely eliminating its program to reduce its balance sheet, otherwise known as quantitative easing:

“At coming meetings, we will be finalizing our plans for ending the balance-sheet runoff and completing balance-sheet normalization,” Mester said in remarks prepared for delivery in Cincinnati. “As we have done throughout the process of normalization, we will make these plans and the rationale for them known to the public in a timely way because transparency and accountability are basic tenets of appropriate monetary policymaking.”

As a consequence, the SPX is breaking out above its 200 day moving average (dma) and approaching resistance at about the 2800 level.

I have been bullish about the likely prospect for a Sino-American trade deal (see Why there will be a US-China trade deal March 1 and The Art of the Deal meets the Art of the Possible). Should we see news of a trade deal, but that event may represent the short-term peak of good news. After all this, what other bullish developments can you think of that could propel stock prices to further highs?

A recent Bloomberg article outlined veteran investor Shawn Matthews’ case for fading a trade deal rally. In particular Matthews cited the signal from the bond market as a sign that any stock market rally from a potential trade deal is not sustainable.

“Right now, it’s a risk-on mentality — you want to be long riskier assets until you get a deal with China,” Matthews, who headed Cantor Fitzgerald LP’s broker-dealer unit from 2009 until last year and now runs his own hedge fund, told Bloomberg TV in New York. “When that happens you certainly want to be looking to scale back.”

Despite Matthews’ recommendation to stay invested in equities for now, the bond market is showing signs of caution, he said. The 13 percent surge in global stocks since Christmas is beginning to reflect some kind of a U.S.-China deal, so a classic case of “buy the rumor, sell the fact” may eventuate, said Matthews.

“The bond market is not seeing the follow through,” said Matthews, whose career began in 1990 and saw him rise to lead one of Wall Street’s biggest brokerages until he left to start Hondius Capital, a macro fund. “If it was truly a risk-on world and people believed it and it was an extended trade, then you would see the 10-year start to back up. That’s a clear sign there’s some concern about what’s going on out there.”

If the stock market rally that bottomed on Christmas Eve was a growth driven surge, why has neither the 10-year yield nor the 2s10s yield curve moved? 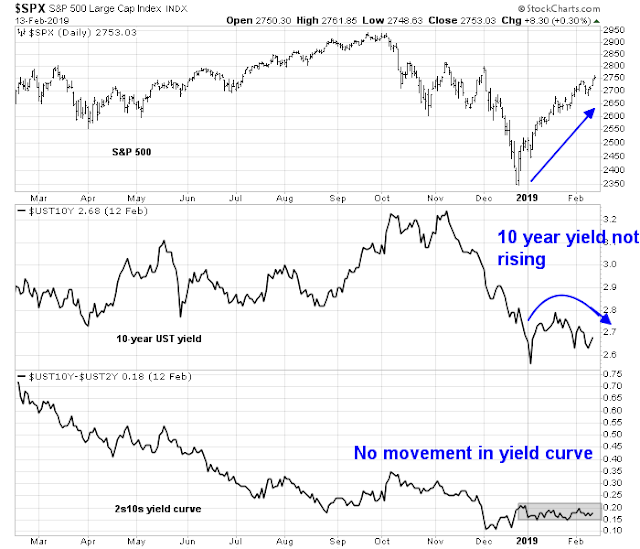 In all likelihood, the rebound from late December is on its last legs. However, none of my bearish tripwires have been triggered, and I am not ready to turn tactically bearish just yet.

The Fear and Greed Index has rebounded strongly, but it has not risen into the target zone of 80-100. At a minimum, I would like this reading in the high 70s before turning bearish. 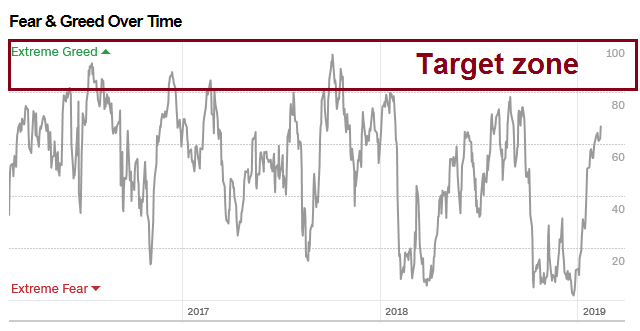 In addition, neither RSI-14 has reached an overbought condition of above 70, nor has the VIX Index fallen below its lower Bollinger Band, which is a signal that the market is about to stall. 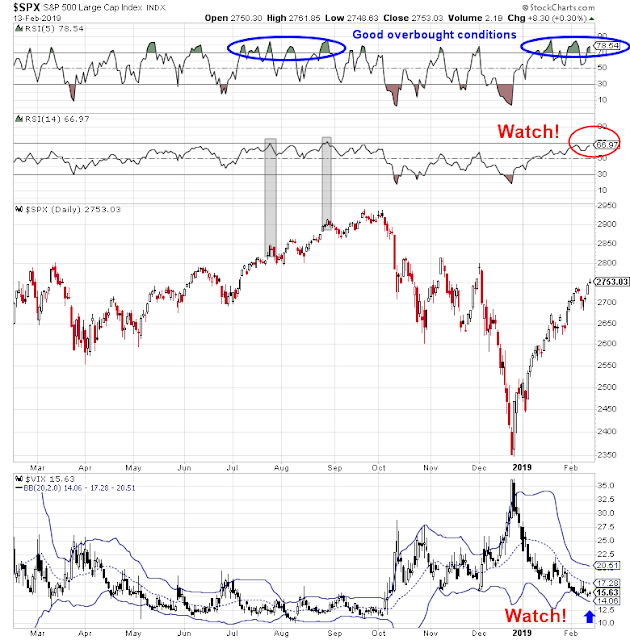 I am not tactically turning bearish just yet. Expect further upside as the FOMO crowd pile in over the next few days. Bespoke pointed out that the market performs well following a 200 dma breakout preceded by eight weeks below it.

In addition, past breadth thrusts from deeply oversold positions have been long-term bullish, and that will be another form of encouragement for the bulls. My inner trader remains bullishly positioned, though he has taken partial profits as stock prices rallied.