In his 2019 State of the Union address, President Trump said he was seeking “real structural change” to China’s economy:

I have great respect for President Xi, and we are now working on a new trade deal with China. But it must include real, structural change to end unfair trade practices, reduce our chronic trade deficit, and protect American jobs.

In the next breath, he referred to the reboot of NAFTA, which only yielded minor changes:

Another historic trade blunder was the catastrophe known as NAFTA. I have met the men and women of Michigan, Ohio, Pennsylvania, Indiana, New Hampshire, and many other states whose dreams were shattered by the signing of NAFTA. For years, politicians promised them they would renegotiate for a better deal, but no one ever tried, until now.

Our new U.S.-Mexico-Canada Agreement, the USMCA, will replace NAFTA and deliver for American workers like they haven’t had delivered to for a long time. I hope you can pass the USMCA into law so that we can bring back our manufacturing jobs in even greater numbers, expand American agriculture, protect intellectual property, and ensure that more cars are proudly stamped with our four beautiful words: “Made in the USA.

While Trump positions himself as a master dealmaker in his book The Art of the Deal, it is said that politics is the art of the possible. Let us consider what is actually possible during these rounds of US-China trade negotiations.

In addition to the growing trade deficit with China, one complaint the West has with China is the protection of intellectual property. Analysis from the St. Louis Fed shows that the situation is improving. Chinese payment for the use of US IP has been steadily rising over the years, and the rate of increase has been higher than China’s GDP. 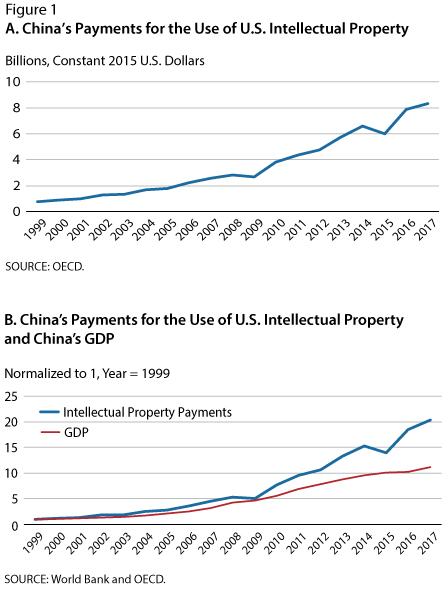 On the other hand, there are still cases like the one involving the Chinese scientist charged with the theft of Philips 66 IP worth over $1 billion:

Phillips 66 spokesman Dennis Nuff confirmed Monday that the company is cooperating with the Federal Bureau of Investigation in an case involving a former Bartlesville employee.

A Chinese national, Hongjin Tan, who is a legal permanent resident of the United States, was charged last week in Tulsa federal court on a theft of trade secrets complaint, according to federal court documents. Tan is being detained, and preliminary and detention hearing are scheduled Wednesday.

In a separate incident, Bloomberg reported on the FBI sting of Huawei:

The sample looked like an ordinary piece of glass, 4 inches square and transparent on both sides. It’d been packed like the precious specimen its inventor, Adam Khan, believed it to be—placed on wax paper, nestled in a tray lined with silicon gel, enclosed in a plastic case, surrounded by air bags, sealed in a cardboard box—and then sent for testing to a laboratory in San Diego owned by Huawei Technologies Co. But when the sample came back last August, months late and badly damaged, Khan knew something was terribly wrong. Was the Chinese company trying to steal his technology?

Like all inventors, Khan was paranoid about knockoffs. Even so, he was caught by surprise when Huawei, a potential customer, began to behave suspiciously after receiving the meticulously packed sample. Khan was more surprised when the U.S. Federal Bureau of Investigation drafted him and Akhan’s chief operations officer, Carl Shurboff, as participants in its investigation of Huawei. The FBI asked them to travel to Las Vegas and conduct a meeting with Huawei representatives at last month’s Consumer Electronics Show. Shurboff was outfitted with surveillance devices and recorded the conversation while a Bloomberg Businessweek reporter watched from safe distance.

This investigation, which hasn’t previously been made public, is separate from the recently announced grand jury indictments against Huawei. On Jan. 28, federal prosecutors in Brooklyn charged the company and its chief financial officer, Meng Wanzhou, with multiple counts of fraud and conspiracy. In a separate case, prosecutors in Seattle charged Huawei with theft of trade secrets, conspiracy, and obstruction of justice, claiming that one of its employees stole a part from a robot, known as Tappy, at a T-Mobile US Inc. facility in Bellevue, Wash. “These charges lay bare Huawei’s alleged blatant disregard for the laws of our country and standard global business practices,” Christopher Wray, the FBI director, said in a press release accompanying the Jan. 28 indictments. “Today should serve as a warning that we will not tolerate businesses that violate our laws, obstruct justice, or jeopardize national and economic well-being.” Huawei has denied the charges.

For Americans, how do they resolve these differences, and what should the proper policy response be?

This conundrum is reminiscent of debates over Fed policy. If an excessively easy monetary policy designed to cushion the economy from the effects of the Great Financial Crisis raises the risk of creating an asset price bubble, what should the Fed do? One option is to raise rates, which chokes off growth, but minimizes bubbles. In the last few years, the Fed has chosen to eschew the use of interest rate policy, which it believes to be an overly blunt instrument, and rely on macro prudential lending policy as a way of combating asset bubbles.

Here is how the Art of the Deal meets the Art of the Possible. These cases of intellectual property theft are specific in nature, and occur on American soil, rather than in China. Trade policy is an overly blunt instrument, and these cases can be dealt with by existing agencies, such as the FBI.

Trump also raised the issue of “real structural reform” in his State of the Union address. What does that actually mean, and can these problems be addressed by the March 1 deadline?

China cannot commit to the kind of structural reforms the US demands. It is pursued policies in direct contradiction of the IMF and Washington Consensus, and it has literally lifted hundreds of millions of people out of poverty. The US wants the Chinese state to withdraw from the economy. While there is an intuitive appeal but the closer it is examined, the less insightful it becomes.

If the size of the state is measured as expenditures as a percentage of GDP than it is the US state that is the outlier for how small it is rather than the size of the Chinese state. Many critics see the US government as having encroached on the markets to an unprecedented extent, and now the US is insisting the Chinese state withdraws. It is an unrealistic demand that is tantamount to unilateral disarmament.

In other words, if the US is demanding the kinds of structural reforms that it proposes by March 1 deadline, it is in effect making an ultimatum that cannot be met, and the demands represent a fig leaf for what amounts to the declaration of a full-blown trade war.

Why bother negotiating when you know the other side cannot yield to your terms?

The WSJ reported that a wave of farm bankruptcies is already sweeping America’s farm country. To be sure, the bankruptcies cannot be all attributable to the trade war, as commodity prices have been depressed. The Midwest represents the heartland of Republican support. and both Trump and Congressional Republicans will have to face the voters next year. Are these demands about structural reforms a form of posturing, or is Trump serious enough to go over the cliff if they are not met?

Moreover, Trump has made it clear he is enthusiastic about a summit with Kim Jong-Un of North Korea, which is a country that China has considerable leverage over. How susceptible is he to Xi Jinping playing the North Korea card? 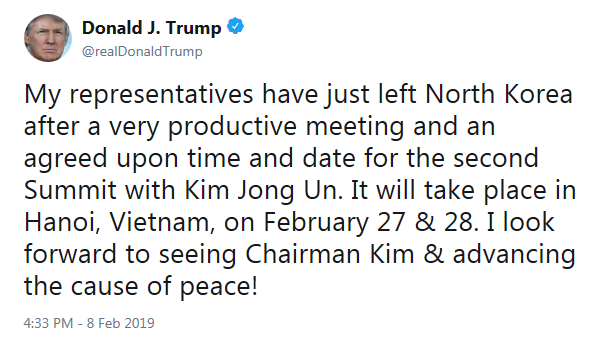 Here is another instance where the Art of the Deal meets the art of the possible. Expect either the March 1 deadline to be extended, or a deal to be made where both sides commit to further discussions on intellectual property protection and structural reforms.

Despite all of the rhetoric about how the two sides are still far apart, and no Trump-Xi meeting is scheduled, a sliver of daylight is appearing in the negotiations. Axios reported Sunday that the US side has floated a trial balloon of a Mar-A-Lago location for a summit instead of China`s proposal of a Chinese location.

Xi may soon come to Mar-a-Lago. President Trump’s advisers have informally discussed holding a summit there next month with Chinese President Xi Jinping to try to end the U.S.-China trade war, according to two administration officials with direct knowledge of the internal discussions.

Both officials, who are not authorized to discuss the deliberations, described Trump’s club in Palm Beach, Florida, as the “likely” location for the leaders’ next meeting, but stressed that nothing is set. The meeting could come as soon as mid-March, these sources said.

A third official cautioned that the team has discussed other locations, including Beijing, and that it’s premature to say where they’ll meet or even whether a meeting is certain to happen.

Everybody wins. The Trump administration demonstrates a mastery of the Art of the Deal. China can temporarily take the tail-risk of additional tariffs and trade war off the table.