Stock prices began on a sour note this morning (Thursday) on the fears of a European growth slowdown. They slid further when Trump advisor Larry Kudlow appeared on Fox Business News and said that there’s “a sizable difference” between the US and China’s positions in the trade negotiations. The White House went on to pour cold water on the idea of an imminent Trump-Xi summit and said that the two may not meet before the March 1 deadline.

The two most trade deal sensitive vehicles, Chinese equity ETFs and soybean prices, weakened as a consequence. However, their technical patterns remain constructive. FXI (top panel) remains in an uptrend as it tested a resistance zone after exhibiting a double bottom. Soybean prices are also in an uptrend and they are also testing resistance. 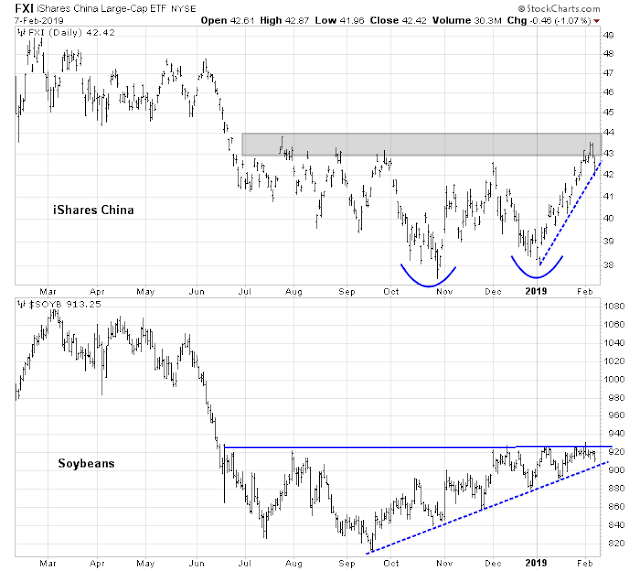 My inclination is to shrug off the negative headlines as posturing by American negotiators. There will be a trade deal. Here is why.

The necessity of a trade deal

Both sides desperately need a deal.

For the Chinese, their economy is weakening. Since official economic statistics can be dubious, a scan of the Q4 earnings reports of listed US companies show that most are showing sales are down roughly -5% (h/t The Long View). 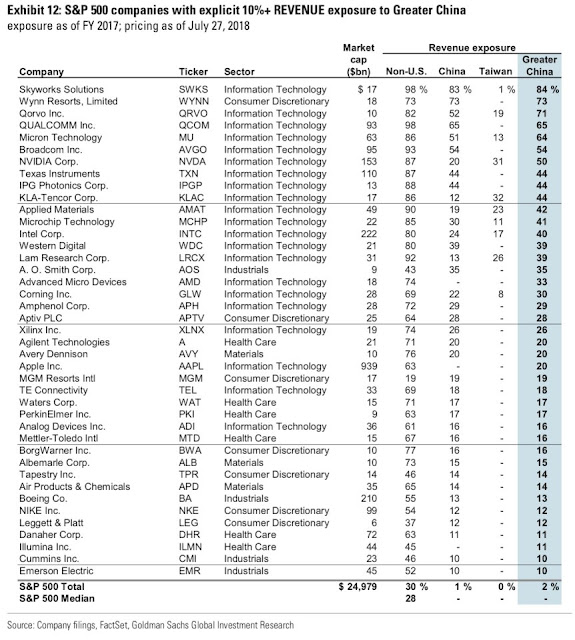 Even the sales at BABA shows that sales growth was attributable to user growth, and not organic growth by user. These figures do not support the narrative of real GDP growth of over 6%.

On the American side, Trump has shown himself to be highly sensitive to falling stock prices. It is difficult to conceive that he would tank the trade talks and the stock market, except as a temporary negotiating tactic. In addition, the WSJ reported that a wave of bankruptcies is sweeping the farm belt.

Throughout much of the Midwest, U.S. farmers are filing for chapter 12 bankruptcy protection at levels not seen for at least a decade, a Wall Street Journal review of federal data shows.

To be sure, the bankruptcies are not all attributable to trade tensions. Low commodity prices and rising farm debt also contributed to the mounting distress, but the trade war did not help matters. 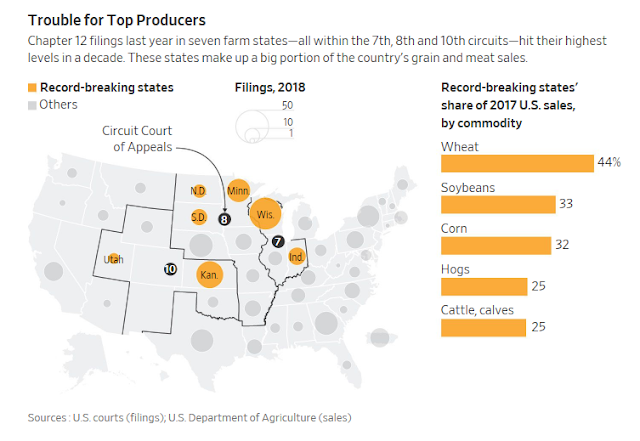 As Trump and the Republicans look ahead to the elections in 2020, a loss of support in this key region which forms the backbone of their support would amount to political suicide.

That said, I would not expect any more than the market consensus on the details of a trade agreement. It will be little more than a face-saving deal that leaves key issues of whether China can reshape its industrial policy, which favors its SOEs, and intellectual property protection. Leland Miller of China Beige Book stated on CNBC that while he believes there will be a mini-deal, friction will rise again in 2020. A consensus has developed in Washington on both sides of the aisle that China is becoming a strategic competitor. Both Trump and the Democrat’s nominee will both position themselves as being “tough on China”.

In conclusion, there will be a phony trade deal by the March 1 deadline. Both sides will declare victory, but they won’t go home. The war will resume next year.