Will the Fed pause in March? – Humble Student of the Markets

In the wake of Powell’s statements last Friday, the market now expects no changes in the Fed Funds rate this year, with a slight chance of a rate hike.

Contrast those expectations with the dot plot, which has penciled in two rate hikes this year. 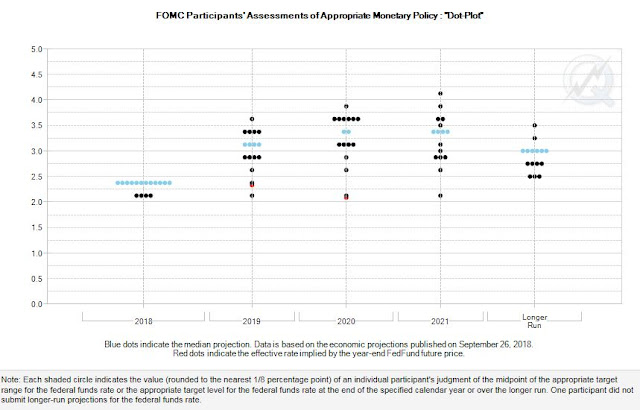 The history of Fed policy is slow incremental changes. Has the market gone overboard on the dovish when it expects a change from two hikes to no hikes?

The market got all excited on Friday during the ASSA panel discussion featuring Powell, Yellen, and Bernanke. A full transcript of the discussion can be found at the WSJ. In effect, what Powell said changed from “we expect to hike two more times in 2019, with the usual data dependency caveats”, to “anything can happen”. Included in the range of possibilities is a pause in rate hikes, and an re-evaluation of the runoff in the Fed’s balance sheet. It doesn’t mean that the Fed will pivot to the most dovish course of action, which is what is discounted by the markets.

Here is what Powell said that made the markets go haywire and risk-on:

But financial markets have been sending different signals, signals of concern about downside risks, about slowing global growth, particularly related to China, about ongoing trade negotiations, about what maybe let’s call general policy uncertainty coming out of Washington, and among other factors. So, you know, you do have this difference between, on the one hand, strong data, and some tension between financial markets that are signaling concern and downside risks. And the question is, with those contrasting sets of factors, how should we think about the outlook and how should we think about monetary policy going forward?

Now when we get conflicting signals, as is not infrequently the case, policy is very much about risk management, and I’ll offer a couple of thoughts on that to wrap up. First, as always, there is no preset path for policy, and particularly with the muted inflation readings that we’ve seen coming in, we will be patient as we watch to see how the economy evolves. But we’re always prepared to shift the stance of policy and to shift it significantly, if necessary, in order to promote our statutory goals of maximum employment and stable prices.

Powell also said that he is listening to the markets:

I think the markets are pricing in downside risks, is what I think they are doing, and I think they are obviously well ahead of the data, particularly if you look at this morning’s labor market data and the other data that I cited. So markets are expressing concerns, again, about global growth in particular – I think that’s becoming the main focus – and trade negotiations, which are related to that. And I’ll just say that we’re listening carefully to that. We’re listening with – you know, sensitively to the message that markets are sending, and we’re going to be taking those downside risks into account as we make policy going forward.

While Powell did allow that the Fed would be willing to re-evaluate the balance sheet runoff, otherwise known as Quantitative Tightening (QT), the statement came with a lot of “ifs” [emphasis added]:

Listening to the market?

What about listening to the market? By responding to every Jim Cramer rant and every blip in the market, the Fed risks creating a Put in the market, which encourages excessive risk taking to blow a financial bubble. From this viewpoint, additional pressure from the White House is unhelpful for maintaining financial stability. 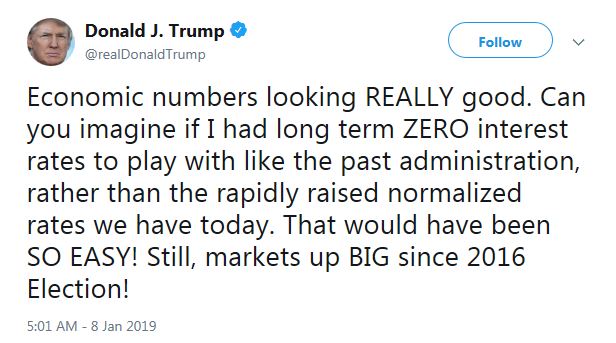 I am also old enough to remember the November 15, 2010 Open Letter to Ben Bernanke opposing QE signed by a number of prominent conservative economists and fund managers. The signatories include Kevin Hassett and David Malpass, who are both members of the current Trump administration.

The following is the text of an open letter to Federal Reserve Chairman Ben Bernanke signed by several economists, along with investors and political strategists, most of them close to Republicans:


We believe the Federal Reserve’s large-scale asset purchase plan (so-called “quantitative easing”) should be reconsidered and discontinued. We do not believe such a plan is necessary or advisable under current circumstances. The planned asset purchases risk currency debasement and inflation, and we do not think they will achieve the Fed’s objective of promoting employment.

We subscribe to your statement in the Washington Post on November 4 that “the Federal Reserve cannot solve all the economy’s problems on its own.” In this case, we think improvements in tax, spending and regulatory policies must take precedence in a national growth program, not further monetary stimulus.

We disagree with the view that inflation needs to be pushed higher, and worry that another round of asset purchases, with interest rates still near zero over a year into the recovery, will distort financial markets and greatly complicate future Fed efforts to normalize monetary policy.

The Fed’s purchase program has also met broad opposition from other central banks and we share their concerns that quantitative easing by the Fed is neither warranted nor helpful in addressing either U.S. or global economic problems.

Niall Ferguson
Harvard University
Author, The Ascent of Money: A Financial History of the World

Kevin A. Hassett
American Enterprise Institute
Former Senior Economist, Board of Governors of the Federal Reserve

Listening to the data

Fed watcher Tim Duy thinks that the Fed is preparing the market for a pause in March, as long as the data cooperates:

Low inflation means the Fed can move patiently. They don’t feel compelled to maintain the pace of quarterly rate hikes. Still, that doesn’t mean they won’t. My baseline expectation is that the data flow remains sufficiently soft and economic uncertainty sufficiently high to keep the Fed on the sidelines until at least mid-year. There is a chance of course that the correction in equity markets has left us all too pessimistic about the outlook for growth and inflation this year. If so, Fed commentary might turn hawkish again sooner than I anticipate.

Just because the economy is softening doesn’t mean the Fed will necessarily deviate from its tightening path. The latest SEP from the December FOMC meeting shows that the Fed has already penciled in a slowdown in GDP growth, and cut the projected hikes in Fed Funds from the September meeting. Arguably, if the growth rate stays at or above the projected growth path, rate hikes and policy normalization will continue.

For a better read on the state of the economy, the latest NFIB small business survey is revealing, as small businesses have little bargaining power and they are therefore a good barometer of the economy. NFIB optimism is coming off the boil, but remains elevated. This is consistent with the observation from Powell and others that the economy is in a good place, and “most of the hard data that we see coming in remain quite solid and suggest ongoing momentum heading into 2019”. 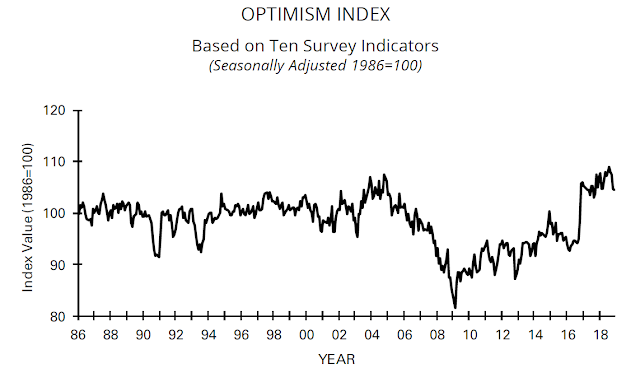 How about inflation? NFIB prices continue to trend upwards. 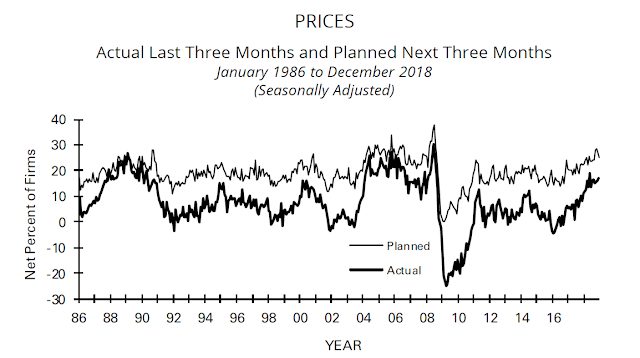 NFIB compensation is also telling a similar story about wages.

The “biggest problem” continues to be “labor quality”, which suggests that wage pressures will continue to rise. 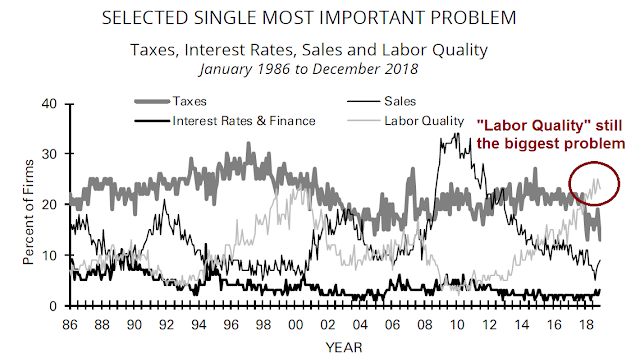 What about financial stability? The NFIB survey of credit conditions are stable. 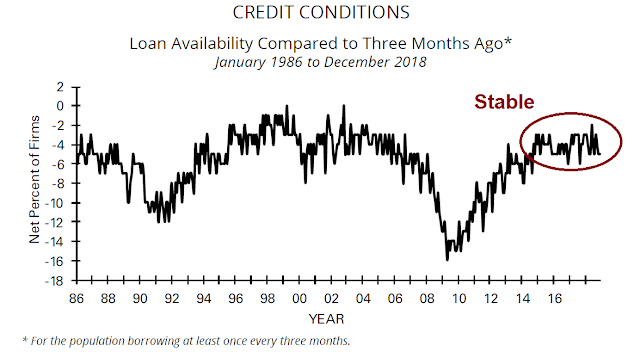 In conclusion, the Fed may decide to pause in March, but sensitive barometers like the NFIB small business survey are still showing rising inflationary pressures and minimal financial stability problems. We should get more clues from the December FOMC minutes, which will be released Wednesday, and speeches from Powell and Clarida on Thursday. While the Fed may decide to pause its pace of rate hikes in March, the data suggests that a pause in the rate of balance sheet normalization is a long shot.

2 thoughts on “Will the Fed pause in March?”