Pax Americana, or America First? – Humble Student of the Markets

December is the season for investment advisors and portfolio managers to meet with their clients. Here are some thought on your an allocation framework as you prepare for those meetings. As a cautionary message, let’s begin with a “buy and forget” portfolio featured in Fortune in 2000 and how they performed by 2012. 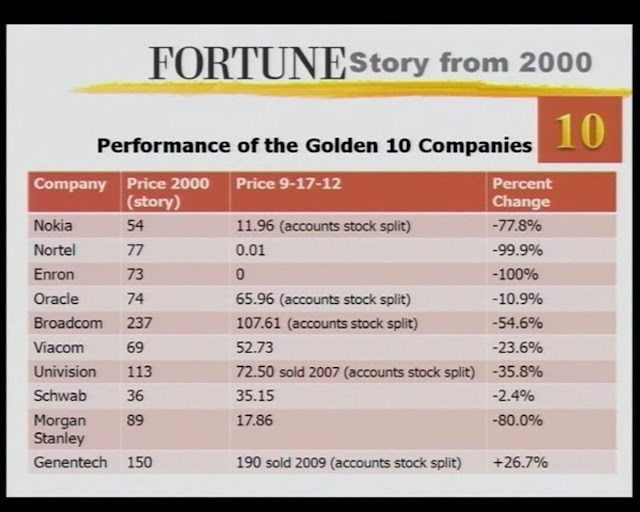 Haha. Experienced portfolio managers and advisors don’t make those kinds of mistakes. We all know that diversification is the only free lunch in investing.

For the simple answer on personal investing, I refer readers to a Business Insider article by Chelsea Brennan, “I spent 7 years working in finance and managed a $1.3 billion portfolio — here are the 5 best pieces of investing advice I can give you”:

Unfortunately, I see American investors making the diversification mistake, as well as mistakes 4 and 5 again and again. Much of what passes for financial planning in the US is based on the mistaken assumption of a backtest that has severe survivorship problems. This will becoming increasingly evident as American policy changes from the era of Pax Americana to America First.

Tiho Brkan pointed out that when US investors make their investment allocation decisions, they often consider this familiar chart of the record of equity returns. Looks pretty good, right? 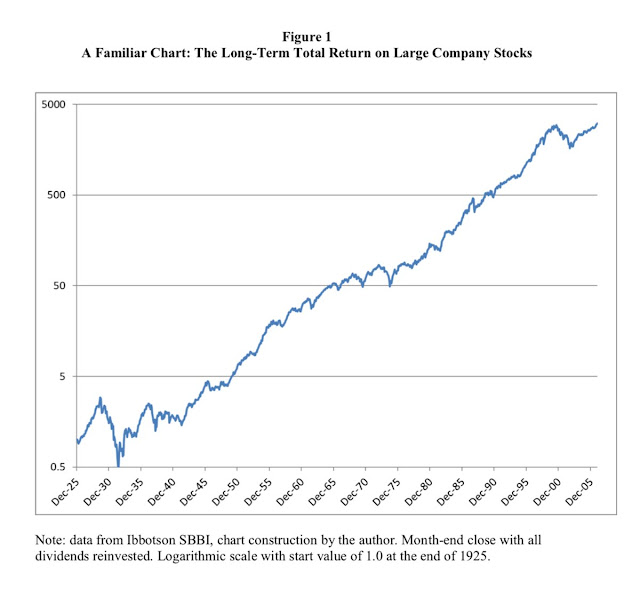 If you went into a client meeting in most industrialized countries with that chart, you would have been laughed out of the room. That’s because if you step back more years, and the return pattern is less familiar and feels distinctly uncomfortable. 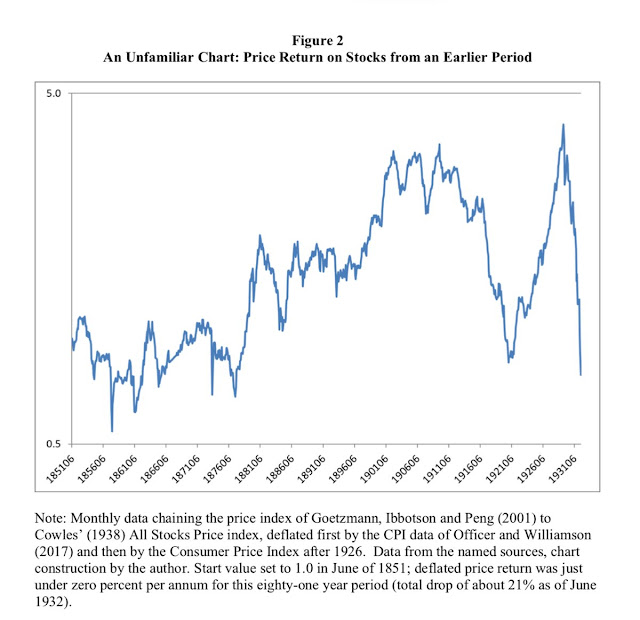 Here is the survivorship problem. A bet on US equities in the last 100 years has been a bet on Pax Americana. Morgan Housel explains what happened in a rather long article:

This is a short story about what happened to the U.S. economy since the end of World War II.

That’s a lot to unpack in 5,000 words, but the short story of what happened over the last 73 years is simple: Things were very uncertain, then they were very good, then pretty bad, then really good, then really bad, and now here we are. And there is, I think, a narrative that links all those events together. Not a detailed account. But a story of how the details fit together.

The entire article is well reading in its entirety, but here is a brief summary:

While what Housel described was American economic history in the post World War II period, the US boom really began when the Great Powers battled each other to exhaustion in World War I, while the US economy remain largely unscathed.

Stocks for the long run? Just ask the Germans how their asset classes fared since the start of the 20th Century. 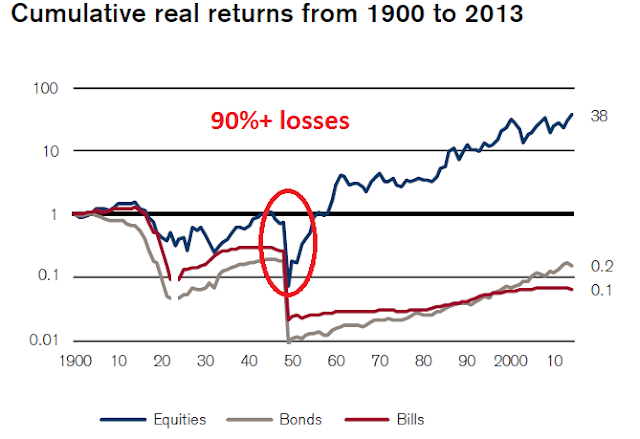 For some perspective, an American investor would have made over 1200 times their money in real terms if they had invested in equities between 1900 and 2013. 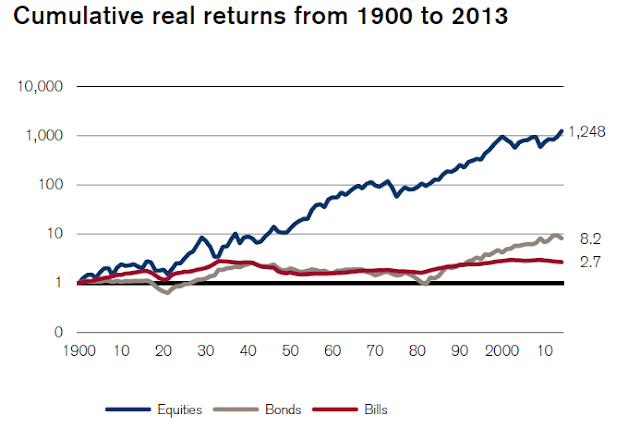 The French fared as well as the Germans in total return, but with less drawdown. Still, returns paled when compared to US assets. 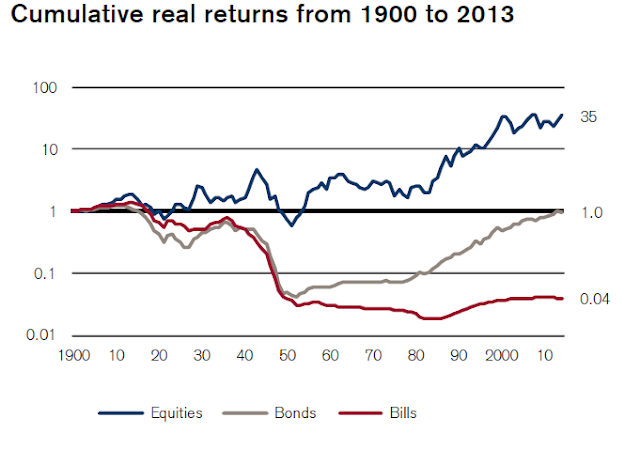 China, which is a major global engine of growth today, suffered considerable dislocation after Mao’s victory and didn’t turn around until recently. 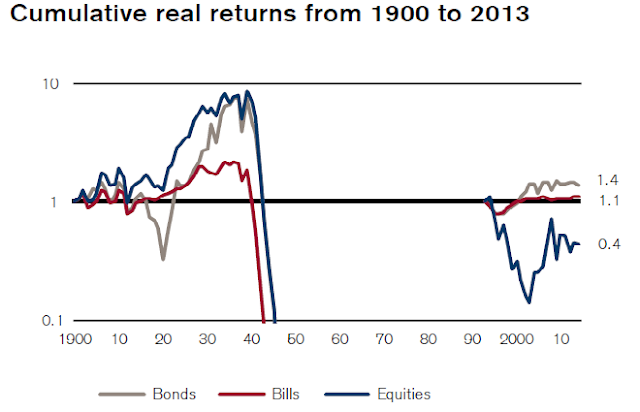 Bottom line: US equities should behave as they have in the last 100 years as long as there is no permanent loss of capital (see China, or undiversified bets such as the Fortune buy-and-forget portfolio), or a loss of the US competitive advantage.

The effects of America First

Here is where Trump’s America First policies pose a threat to long-term equity returns. Before we begin, I would like to preface these remarks by pointing out that Morgan Housel’s history of the post-War America shows that the problems of populism did not just originate with Donald Trump. Trump’s ascendancy is just one manifestation of the problems that plague American society.

American foreign policy has pivoted from the US as the leaders of the free world, which I call the Pax Americana model, to a win-lose world view. Why should Americans maintain troops to protect Europe, South Korea, or other countries around the world? Why does Article 5 of the NATO treaty matter?  In effect, Trump is trading off the soft power of America to focus on hard power, based on the principles of America First.

Even as Trump withdraws from global leadership, A recent Pew Research Center poll shows that the residents of most countries prefer the old world order of American leadership over one dominated by China.

Does soft power matter? As an example, the accounts from Brookings show that China is trying to develop its soft power by attracting foreign students to its universities [emphasis added]:

In a classroom adorned with Mandarin characters. They are not studying in Nairobi but at China’s prestigious Peking University. The Kenyan students explain how China has given them full scholarships to receive educational opportunities they are deprived of at home and how they will gain skills they can take back to enrich their own countries.

China is keen to promote itself as a benefactor of international students. On the other side of the Pacific, the United States—the country that has actively inspired the world’s smartest and most curious students to come study on its shores for generations—seems to be moving in the opposite direction. Through a series of policies and actions, the Trump administration is driving foreign students away from the United States. Chinese students themselves only narrowly avoided being victims of a total ban pushed by Trump staffer Stephen Miller. China views this accelerating trend as an opportunity to fill the gap. In many parts of Africa and Asia, this change is already underway. And as foreign students pick Chinese campuses over U.S. ones, a critical element of America’s soft power is in danger of being eroded.

The United States is still the world’s hub when it comes to higher education. In 2016, more than 1 million international students enrolled at U.S. colleges and universities, while fewer than half a million studied in Chinese higher education institutions.

At the same time as China has endeavored to expand its international higher education system, the U.S. government has scaled back its financial commitments. The Fulbright Program, a hallmark of U.S. cultural diplomacy since 1946, has faced calls for funding cuts since the Obama administration. Generations of participants—who are sponsored by the U.S. government—have gone on to important positions in academia, politics, think tanks, journalism, arts, and business around the world. Despite this impressive legacy, the Trump administration recommended a 71 percent reduction in funding for the program in its 2019 budget proposal.

The WSJ reported that foreign student enrollment is falling in the US:

“Students are not feeling welcome in some states, so they are looking beyond those states and heading to places where they will feel welcome,” she said.

The slowdown comes as U.S. schools struggle with demographic and revenue challenges due to the falling number of Americans graduating from high school. As a result, U.S. colleges and universities have become increasingly dependent on revenue generated from international students. Public schools often charge international students more than what domestic students pay.

The U.S. is also losing students to English-speaking countries such as Canada, Australia and the U.K, which have all seen growth in the past year. 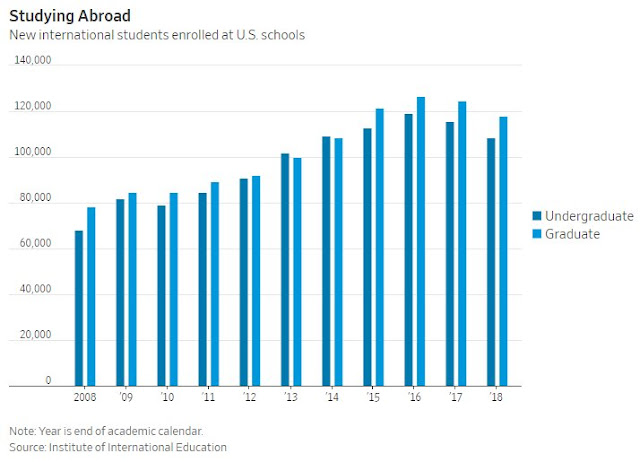 As the US closes its borders to immigrants, the dynamism of the economy becomes visibly hobbled by the barriers erected to international students, who study at top US schools and who stay to startup new businesses. Bill Kerr, D’Arbeloff Professor of Business Administration at Harvard Business School, documented how the US has been an enormous beneficiary of inventor talent flow over the years. 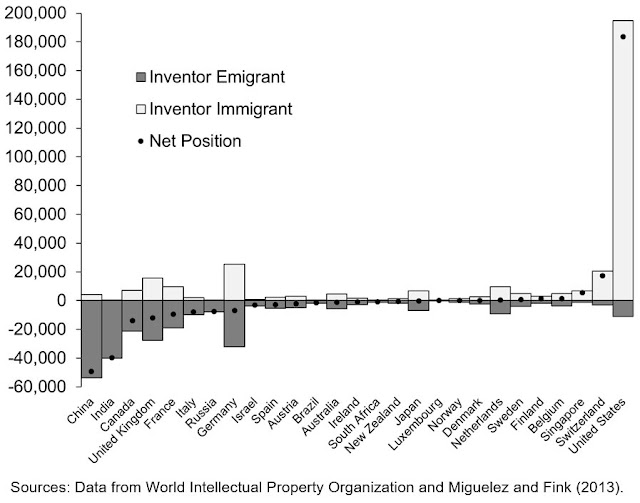 Kerr wrote: “These inflows have reshaped US innovation in advanced technology sectors. The contribution of immigrants to sectors like computer science and biotech have increased dramatically over the past 40 years.” 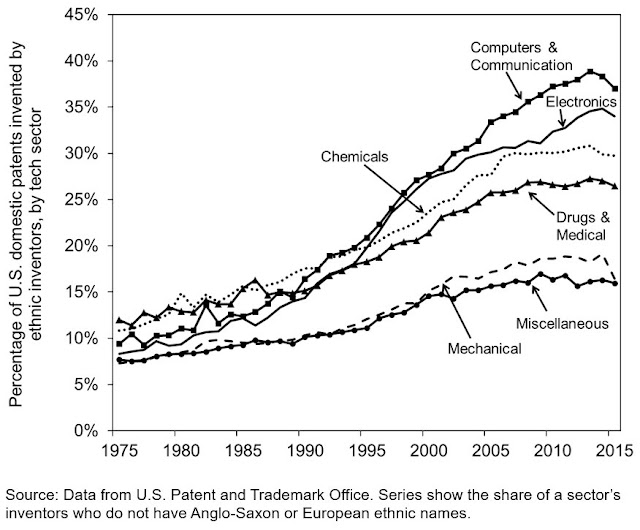 Where will the immigrants come from to found next Intel, Apple (Steve Jobs’ father was a Syrian from Aleppo), or Google?  Can Pax Americana survive America First, which looks like a policy of short-term gain for long-term pain?

This is a point to ponder as investors review their long-term investment plans.