Mid-week market update: This market is becoming increasingly jittery. Indeed, the chart below shows that the stock market moves more per dollar traded than usual, indicating a lack of liquidity. 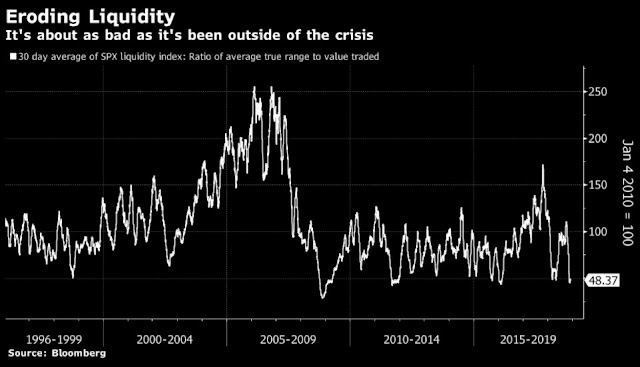 This indicates that volatility is likely going to increase. Such an environment can be both profitable and trying for traders, as I have both good news and bad news from the sentiment front.

Let us start with the bad news. My former Merrill Lynch colleague Fred Meissner of The FRED Report is finding signs of long-term complacency in the Investors Intelligence data, and readings are similar to levels observed before the Crash of 1987.

The Investor’s Intelligence poll has three categories: Bulls, Bears, and those expecting a correction. We only chart the Bears, and this is why. Managers that are bulls are invested, and managers that are expecting a healthy correction generally remain invested. Managers that are bears are the only ones that really sell, and we assume that they have already sold – in other words, a low %Bears number is ammo for a decline. What normally happens, as markets decline, is that the % Bears number advances. We can see this in the 2010 to 2012 correction, the 2015 to 2016 correction, also in the 1990’s and in the 1970’s. Our concern is that this is not happening during this current corrective phase. One of the most significant times we saw this is during the 1986 to 1988 period, specifically during the 1987 crash period.

The takeaway is that low %Bears very often leads to violent declines, especially if the %Bears does not increase as the market is correcting. In addition, it is not low %bears in a vacuum. If the market is rallying and the %bears are low, it is a condition to be monitored but not necessarily a reason to sell. It is how the %Bears react in periods of consolidation and/or correction that is most important.

However, he is not calling for a 1987 style crash (chart annotations are mine).

This does NOT mean we are entering another 1987-like period, but it does mean advisors should be on their guard and know what defensive steps they want to take in a more protracted decline. 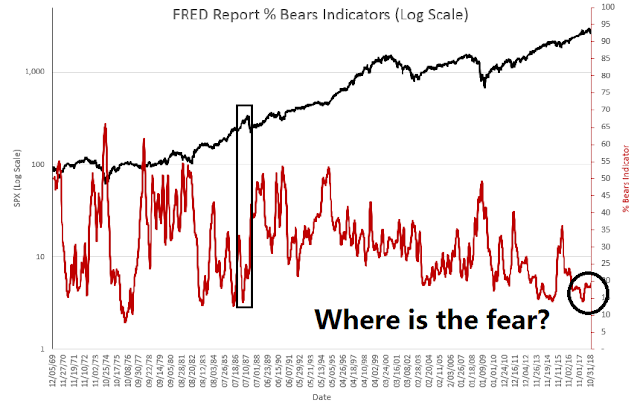 I agree. II sentiment is not consistent with levels seen at long-term market bottoms. In light of the technical breakdowns that I have pointed out before, this suggests further downside risk for stock prices.

On the other hand, Mark Hulbert recently wrote that his sentiment indicators are at washed-out extremes. Both his market timers (blue line) and NASDAQ timers (red line) indices are at levels not seen since Brexit. This sentiment extreme indicating a crowded short is setting the potential for a market rally. However, Hulbert has noted in the past that his sentiment models are most effective at predicting returns only on a one-month horizon. 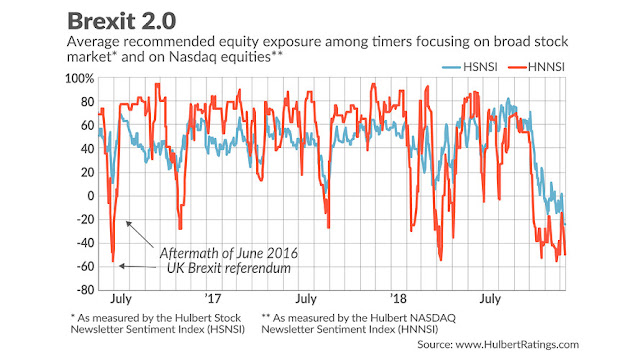 For a different perspective on sentiment, I am indebted to one of my readers for the (sort of) good news. He has dissected the put/call option activity between the smart money and the retail money. The “smart” money is defined as the index put/call ratio, because the pros tend to dominate activity in index options. By contrast, retail investors dominate individual stock option activity, and their sentiment is better measured by the equity-only put/call ratio. 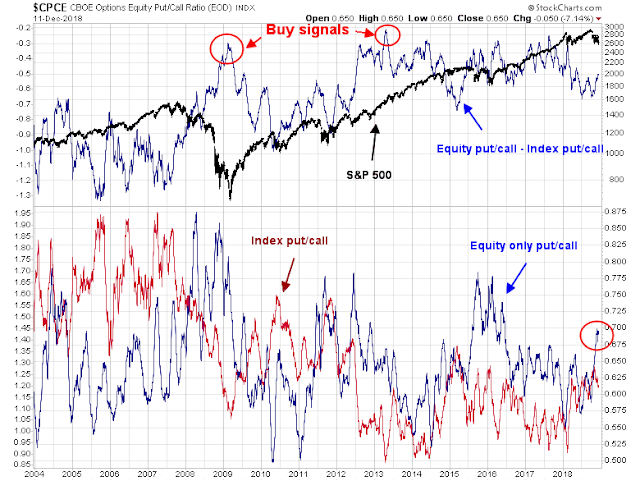 Here is the big picture. Expect a rally, but don’t expect it too last very long.

My inner investor remains cautious on the stock market. My inner trader covered his short positions last Friday and flipped to the long side in anticipation of profiting from an oversold rally.