A Dow Theory sell signal? – Humble Student of the Markets

Mid-week market update: I suppose that this may sound counter-intuitive now that the market is undergoing a relief rally, but Ralph Acampora warned about a possible Dow Theory sell signal about two weeks ago should the DJIA decline to break its March lows.

What are the odds that the Dow will test its March lows, or break them to flash a sell signal? 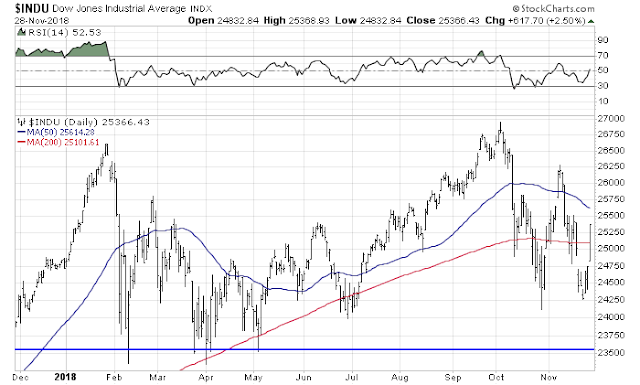 I have highlighted extreme levels of equity bearishness in the past, in the form of AAII sentiment and the NAAIM Exposure Index, so I won’t repeat myself. Another data point of a crowded short appeared this week in the form of II sentiment. The bull-bear spread has fallen to levels not seen for two years. 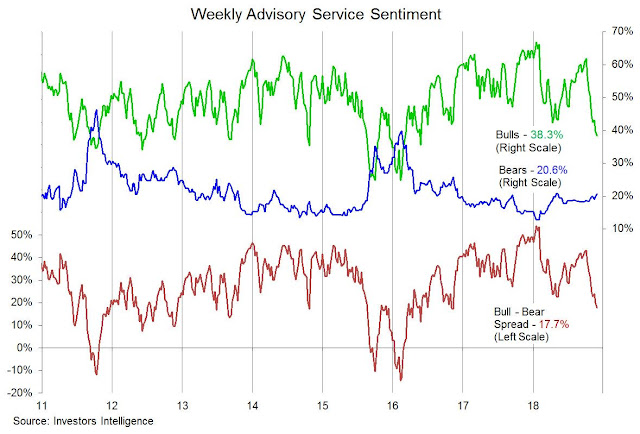 Helene Meisler also very succinctly summarized the bull case last weekend in a Real Money article. The article is well worth reading in its entirety, but here are her key points. The chart patterns between the current episode of weakness looks very similar to the one experienced in 2015-16. It is therefore natural to think that the market will rally and come back down to re-test the previous lows.

She went on to demonstrate that the FAANG market leaders are performing better today than the 2016 episode. In addition, we are seeing a high low on the NYSE Advance-Decline Line compared to 2016.

Never say never, but the odds are stacked against a re-test of the old lows.

Here is the bear case. It’s all up to the US Dollar. I have shown this chart before, but the stock market has historically come under stress whenever the annual change in the USD Index exceeds 5%. Any sign of strength up to about the 76.50 level would trigger that sell signal. The USD Index closed Wednesday at 96.83. 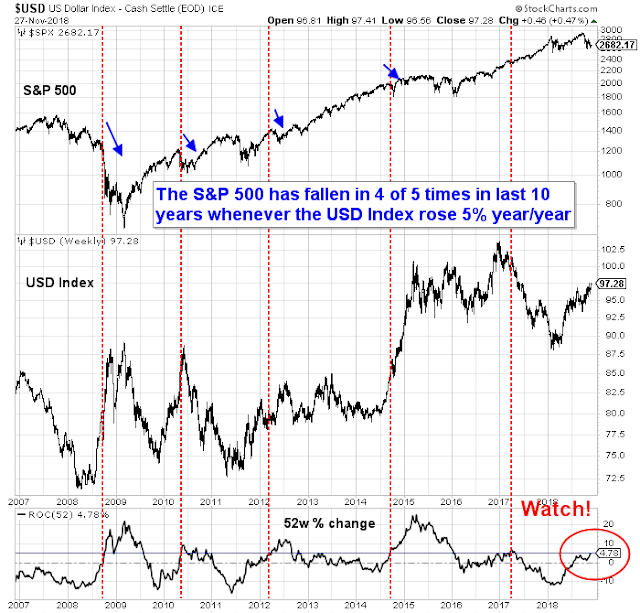 There is considerable upward pressure on the USD from economic growth differentials. According to Bloomberg’s consensus survey, the US ix expected to outgrow the eurozone and the UK by 1% next year, which is the widest divergence for 2019. 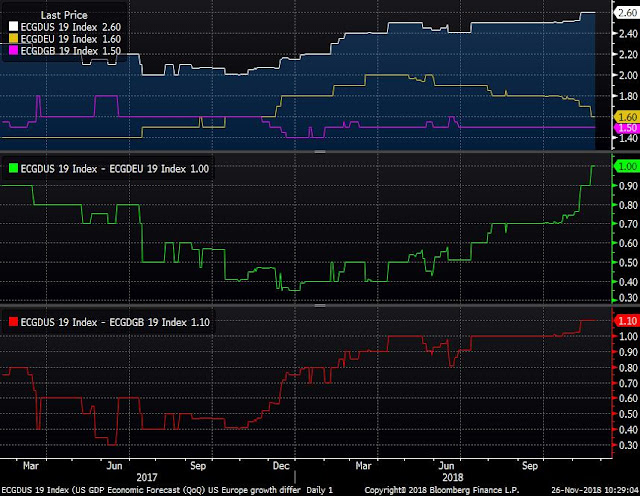 The market interpreted this week’s Clarida and Powell speeches as dovish and therefore USD bearish, but Fed watcher Tim Duy thinks that’s what happens when the Fed abandons forward guidance. They aren’t going to tell you where they think rates are going anymore:

Discount the Fedspeak, watch if the evolution of the dot plot matches the “dovish” rhetoric.

This weekend will see the Trump-Xi meeting. Anything could happen. Further dollar strength at this point could create havoc for stock prices.

Subscribers received an email alert that I had sold my long positions into the rally ahead of the Trump-Xi meeting this weekend. It’s time to step aside ahead of this binary risk.