Has the correction bottomed? What’s next? – Humble Student of the Markets

Mid-week market update: Is the correction over? At least my inner trader had been positioned for market weakness. Subscribers who had been following my inner trader, you know that we issued real-time alerts to buy the market on September 12, 2018 and flipped short on September 21, 2018. (You can subscribe here if you haven’t done so).

Here is the bull case. If this is a typical shallow pullback similar to the weak periods the US market has experienced since the February correction, then the bottom is near. The VIX Index spike above its upper Bollinger Band (BB) last week, which is a sign of an oversold market. Similar episodes during the post-February period has seen low downside after such signals. As well, both the 5 and 14 day RSI are more oversold than they were at the height of the February sell-off. 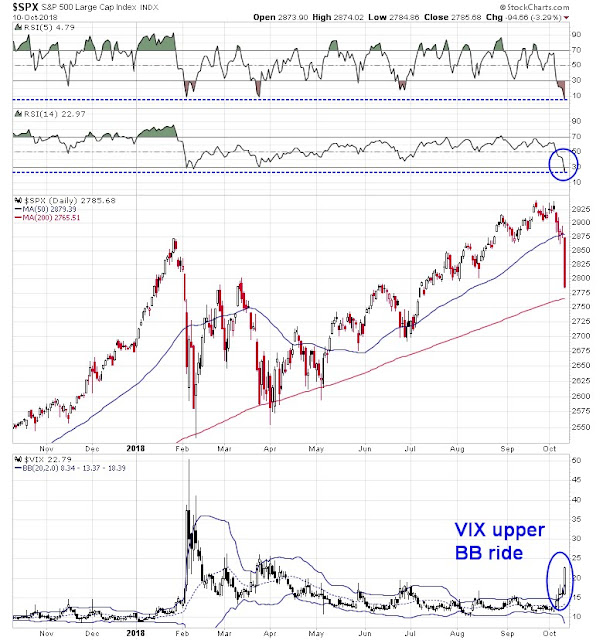 As well, there have been a number of historical studies showing what happens when SPY closes down five days in a row, which has only occurred nine times in the last five years. Such episodes have tended to be short-term bullish.. 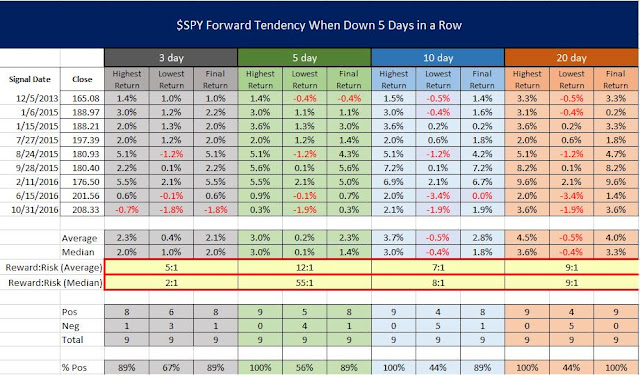 Some signs of panic are starting to appear. The equity only put/call ratio spiked to 0.84 last Friday, October 6, 2018. If history is any guide, such readings have been consistent with near-term market bottoms. 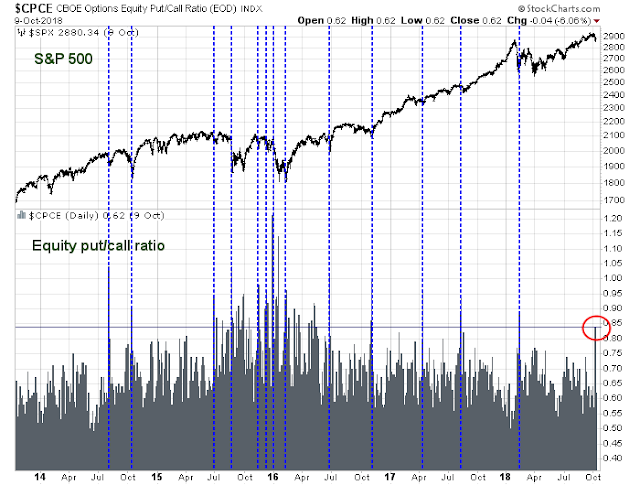 The Fear and Greed Index has plunged to 8, which is at levels seen in past market bottoms. 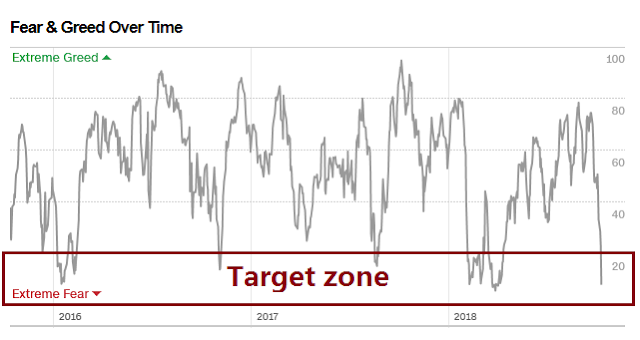 Breadth and momentum sell signals have reached their initial downside target. I am indebted to Urban Carmel, who pointed out that whenever NYSI has turned negative, the market has suffered minimum drawdowns of 5%. Peak-to-trough decline reached 5% today. 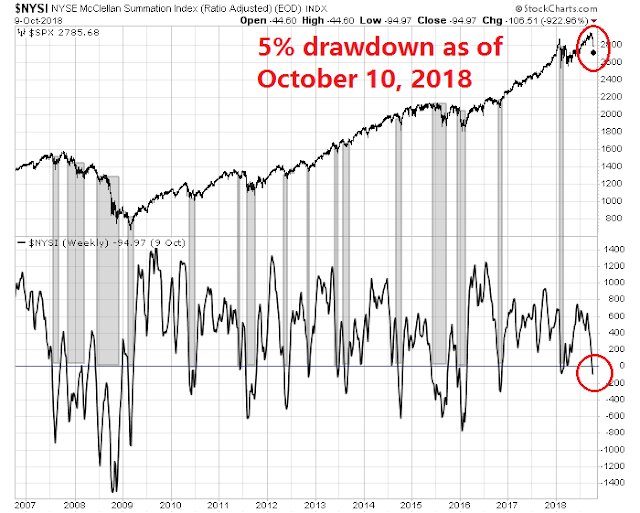 These readings suggest that the market is ripe for an oversold rally. On the other hand, there are a number of other indicators that point to a deeper correction.

One of the nagging doubts leading to the conclusion that a short-term bottom is in is the lack of investor capitulation. Only one of the three components of my Trifecta Bottom Spotting Model is flashing a bullish signal. The term structure of the VIX Index only inverted today, indicating that fear is only started to creep into traders’ psychology. On the other hand, TRIN has not spiked above 2 during the latest pullback. A closing TRIN reading above 2 is typically a sign of price insensitive selling, which are signs of a “margin clerk” or “risk manager” market where participants are forced to liquidate long positions. As well, the intermediate term overbought/oversold model is not in oversold territory yet. 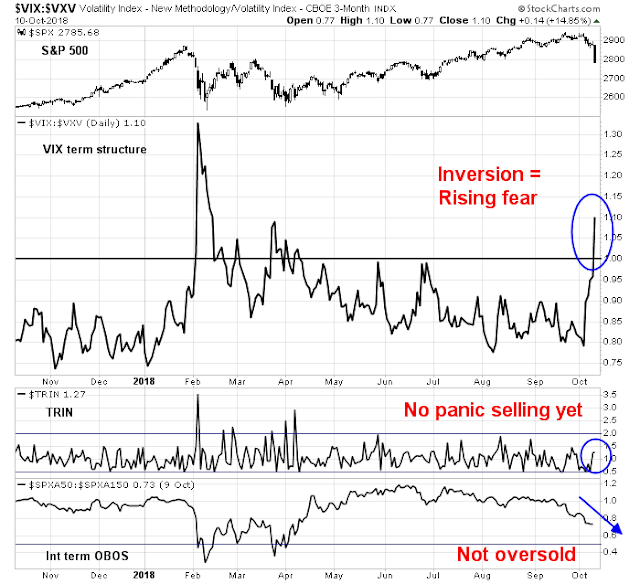 Adding insult to injury, Business Insider report that it has been the stocks with the greatest hedge fund ownership that have fallen the most. The selling may not be over. Zero Hedge (bless their bearish hearts) reported that equity market weakness has prompted trend following CTAs to liquidate their long positions and go short.

Last week, just before the stock market tumbled on the heels of sharply higher rates, we noted that one of the key culprits behind and indiscriminate selloff, systematic CTA funds, were not yet present. Specifically, as Nomura’s Charlie McElligott said the bank’s latest CTA model showed that systematic-trend funds were “at- or near- deleveraging “triggers” however not quite there yet.

That’s no longer the case.

According to the latest update from Nomura’s cross-asset quant, CTA deleveraging (as 2w and 1m window short-term models flip “short”) has finally kicked in, creating -$66B of SPX for sale as “Long” position goes from +97% to +77% and then ultimately to +57% on the break below below 2895 (assuming futures levels “hold lower” at the close), a threat then can “self-fulfill” with front-run flows.

If the bulls were to have any chance of regaining control of the tape, price momentum has to at least show some signs of stabilization before a durable bottom can occur.

The biggest near-term fundamental challenge for stock prices is Q3 earnings season. The latest update from FactSet shows that forward 12-month EPS is still being revised upwards, but Q3 guidance is worse than the historical average. 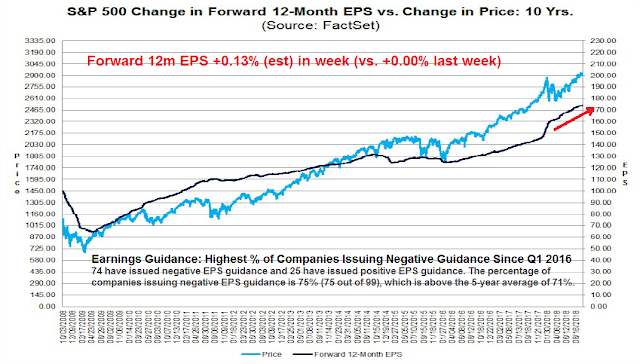 I will be watching closely the guidance that companies give for Q4 and beyond. What will they say about tariffs, or labor costs and their effects on operating margins, especially in light of Amazon’s decision to raise their minimum wages to $15, and Starbucks offer of backup childcare for employees at only $1 per hour?

Q3 earnings report kick off this Friday with a number of major banks (C, JPM, WFC), and begin in earnest next week. Stay tuned. There is a risk that earnings disappoint, or the tone of the guidance negative. In that case, downside risk will be a lot higher than current market expectations. 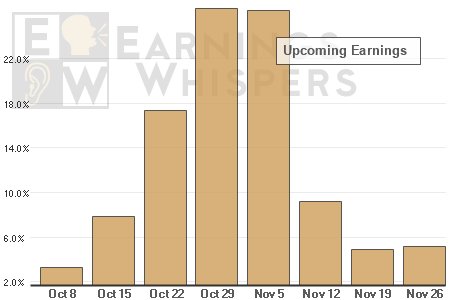 On the other hand, technical conditions are sufficiently oversold to expect a short-term bounce. My inner trader is inclined to take partial profits in his short positions, and then wait for the rally to re-establish his full bearish positions.

From a risk control perspective, please be reminded that falling markets tend to exhibit above average volatility. Traders should therefore adjust their positions accordingly.

12 thoughts on “Has the correction bottomed? What’s next?”