Everyone expects Mr. Bond to die – Humble Student of the Markets

Mid-week market update: For a change, I thought it was more appropriate to write about bond yields instead of the usual tactical trading commentary about stock prices on this FOMC day.

Increasingly, there has been more and more bearish calls for bond prices (and bullish calls for bond yields) as the Fed continues its rate normalization program. Some analysts have pointed out a nascent inverse head and shoulders formation on the 30-year yield (TYX). With the caveat that head and shoulders formations are never complete until the neckline is broken, a decisive upside breakout in TYX would be bad news for long Treasury prices.

I would argue against an overly bearish view for bonds. At a minimum, bond yields are unlikely to rise as much as expected, and they may actually decline slightly from current levels.

Here is the long-term perspective on bond yields. The chart below depicts the 10-year Treasury yield compared to nominal GDP growth. We can make two observations from this chart: 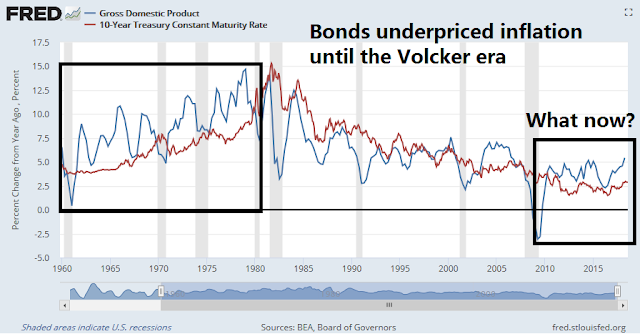 The bond bears will argue that the post-GFC period of QE and financial repression is also underpricing bond yields. Therefore the Fed`s gradual normalization is therefore bullish for yields and bearish for bond prices.

Let`s unpack that analysis. First, we can observe that the 10-year yield has closely tracked real GDP growth this cycle. Tactically, betting on a regime shift where yields normalize to some higher premium level amounts to a “this time is different” bet. Do you really want to do that? 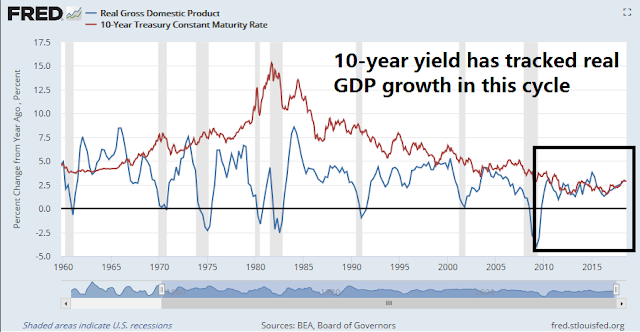 To be sure, nominal GDP is composed of real GDP plus inflation. There is little doubt that inflation, and inflationary expectations are rising. On the other hand, I can’t see how real GDP can sustain the current torrid rate of growth seen in 2018.

The recent FT Alphaville post “America’s economic sugar high is starting to wear off” tells the story of fading growth tailwinds from the tax cut bill.

No binge ends well. Whether from junk food or alcohol, initial euphoria eventually gives way to a crash, and often self-loathing. The same is true for too much stimulus. Jacked up on tax cuts, a $1.3trn spending bill, easy monetary policy and a weakening dollar, the US economy has enjoyed its own version of a ‘sugar high,’ says JPMorgan. What’s worse, they warn: the crash is coming.

The chart below shows the evolution of 2018 real GDP growth forecasts from various well-respected sources, which has risen quite dramatically. 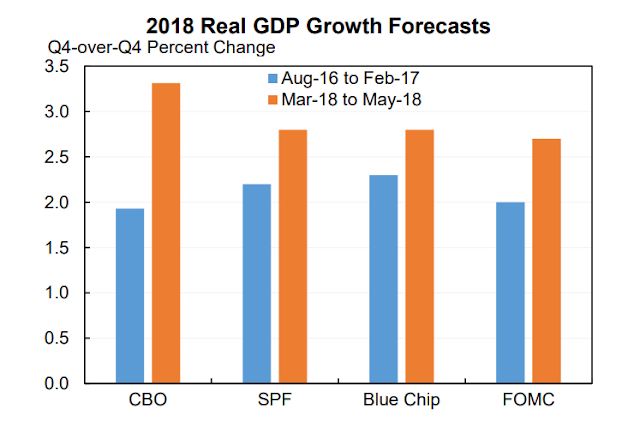 On the other hand, the same long-run growth forecasts from the same sources have been steady. Arguably, they have declined slightly. 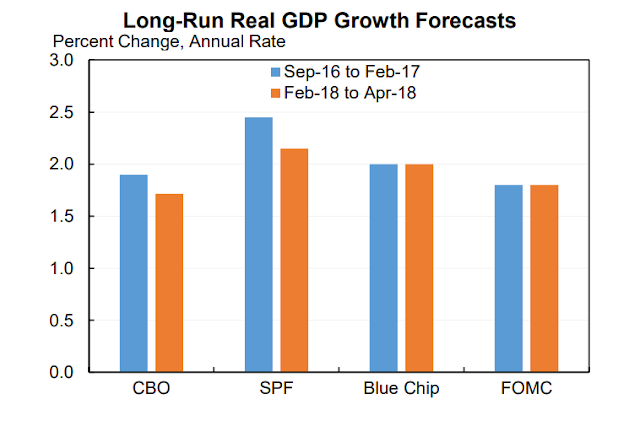 For JPMorgan, US economic and earnings growth are bound to decline not just because of higher interest rates and a stronger dollar, but also because of the ongoing trade war, political tail risks in Washington and “the failure of the Fed to recognise those potential developments”.

If I am correct in my analysis, then expect the yield curve to continue to flatten as the Fed continues to tighten monetary policy. For equity investors, this translates to greater volatility in the future. Analysis from Callum Thomas of Topdown Charts indicates that the shape of the yield curve leads equity volatility. 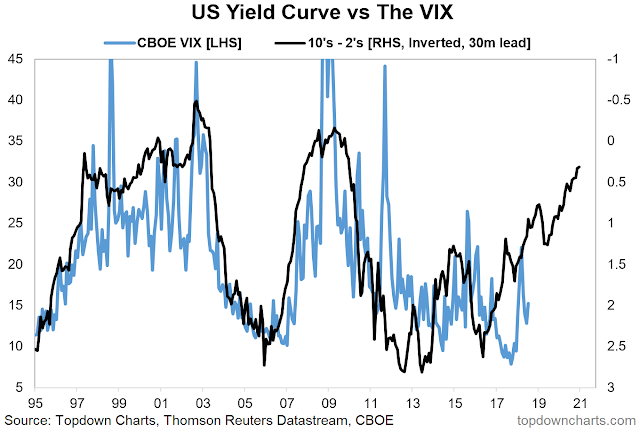 Get ready for a bumpy ride ahead.

2 thoughts on “Everyone expects Mr. Bond to die”