Mid-week market update: Here at Humble Student of the Markets, we believe that investors can gain great insight through the use of inter-market, or cross asset market, analysis. During this period of heightened trade tensions and emerging market stress, it is the US Dollar that is driving risk appetite, and the direction of stock prices.

Indeed, the stock market has weakened whenever the year/year increase in the USD Index has reached 5% or more. If the index were to rally up to about the 96 area this week from Wednesday`s closing level of 95.06, the 5% tripwire will be triggered. 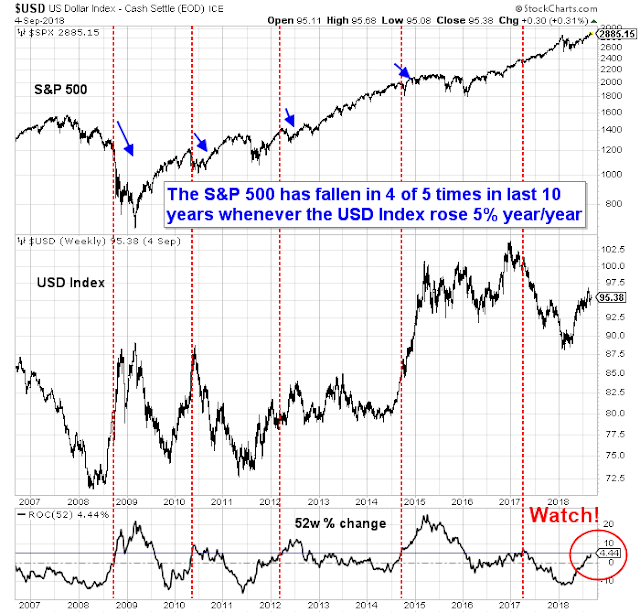 Trade tensions are set to rise. The public comment period for the new tariff that the Trump Administration wants to levy on $200 bln of imports from China ends on September 6. The US President has made it clear that he intends to move forward as China has not signaled its willingness to change its behavior. China has responded by announcing that it will retaliate with tariffs on $60 bln its imports from the US. Even if the tariffs are not implemented immediately, it will cast a pall over the investment climate.

Trump also indicated that he will get around to addressing Europe’s unfair trade practices too. He dismissed as insufficient Europe’s offer, according to reports, to drop all auto tariffs. Europe is chaffing under a series of actions that the US has taken over the past two years, including pulling out of the Paris Agreement, slapping its steel and aluminum with tariffs justified on national security grounds, and the unilateral withdrawal from the treaty with Iran. Trump encouraged the UK to leave the EU and has offered France “a better deal” if it left too. At the end of last week, Trump again threatened to leave the WTO, “if it does not shape up.”

Meanwhile, NAFTA negotiations were not concluded at the end of last week. Talks will resume the middle of next week. Canada appears willing to cede some market share to the US dairy industry, but it cannot accept the steel and aluminum tariffs and the weakening of the conflict resolution mechanism. However, the White House has gone ahead and notified Congress that it planned to sign a deal with Mexico in 90-days and Canada can “join if it is willing.” By informing Congress on August 31, it allows the current president of Mexico to sign the agreement before AMLO takes office on December 1.

Since Congress had authorized the President to negotiate a trilateral agreement and he has submitted a bilateral agreement, the stage is set for a battle between the two branches. Also, if the lame duck Congress does not return to take up the measure, the duty will fall to the next Congress. The composition of the next Congress is not known, polls suggest the historical pattern in which the party that controls the executive branch loses seats in the legislative branch, will likely remain intact.

I would also add that the US-Mexico trade agreement would be a catastrophe if Trump decided to exclude Canada. The centerpiece of the agreement is a new set of rules on auto production, with tightened Rules of Origin for auto parts, as well as a higher level of US-Mexican content than NAFTA. Manufacturers would be hard pressed to adhere the higher North American content under NAFTA with Canada in the agreement. Without Canada, there would be no car produced in North America that would qualify for tariff free treatment. Think of what a disaster that would be.

At the same time, EM currencies are taking a hit from the combination of rising stress in the offshore USD market, and greenback strength. The cracks began in Turkey. They then migrated to Argentina, and now to South Africa and Indonesia. EM currencies and EM bonds are tanking as the USD strengthens. 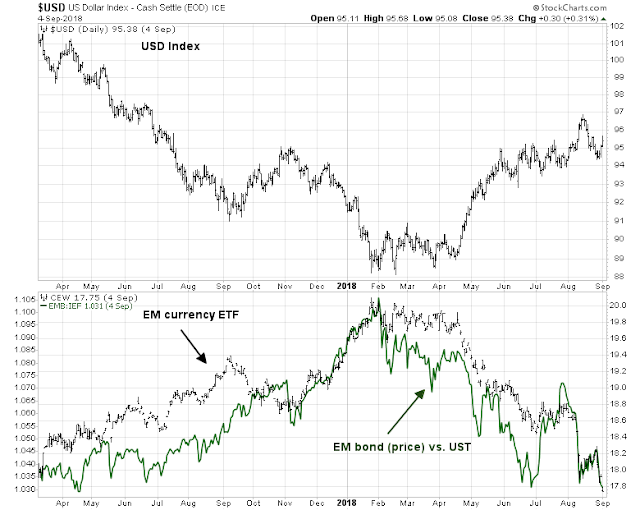 Remember the yield curve? While everyone was watching the 2-10 Treasury curve, which incidentally steepened this week, Jeffrey Snider of Alhambra Investments pointed out that the eurodollar curve has slightly inverted. This is another indication of rising stress in the offshore USD market. 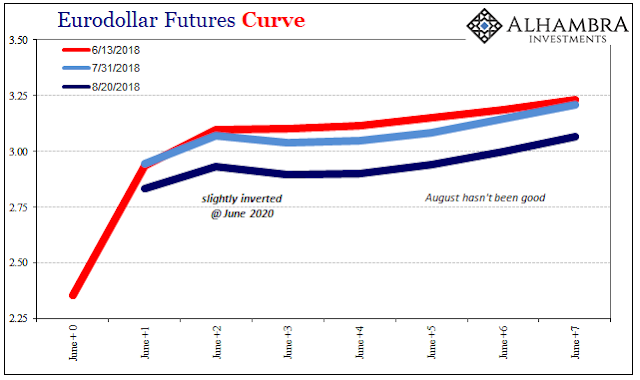 As bad as it gets?

The bear case for the dollar is more difficult to make, other than to point out that a bottom may be forming. Even as the USD Index strengthened yesterday (Tuesday), the natural expectation was the Chinese Yuan would weaken. Instead, the PBoC intervened to strengthen CNY overnight, indicating that China was not interested in a currency war.

Oh, and remember soybeans? Soybeans was a major target of Chinese tariff retaliation. Soybean prices have cratered, but they appear to be finding a bottom at these levels. This may be an indication that trade tensions have reached their height.

Another wildcard is the Trump administration’s position on the greenback. Here is a timeline of past statements, which has been both bullish and bearish. Will Trump say anything? If so, what? 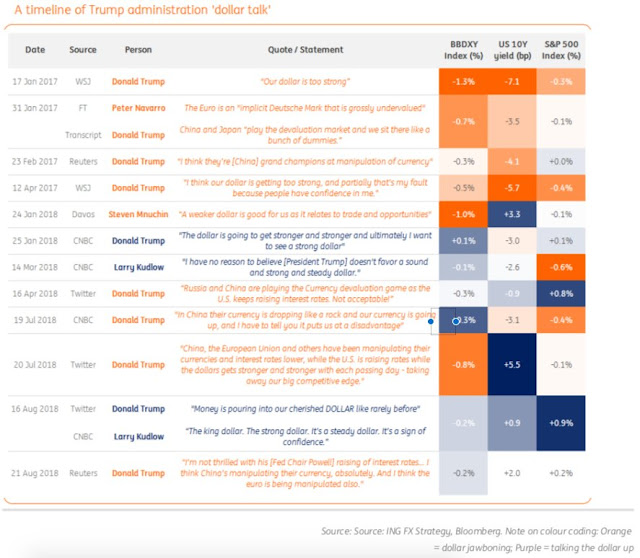 The technical picture of the USD Index can be viewed from either a glass half-full, or half-empty perspective. On one hand, the hourly chart of the USD ETF (UUP) shows that greenback weakened today (Wednesday) after rallying yesterday, which can be thought of as risk appetite and equity bullish. On the other hand, the index may be in the process of tracing out an inverse head and shoulders, which is risk appetite bearish. (Just remember that the caveat to a head and shoulders formation is not complete until the neckline is broken.)

As well, the fact that the SPX is consolidating above its breakout level from the January highs can be interpreted as constructive.

I don’t pretend that I can predict the near-term path of the USD, but its trajectory will be a short-term “tell” of where risk appetite, and stock prices will go.

2 thoughts on “The Dollar tail wagging the market dog”