Mid-week market update: In light of the recent market turmoil, I thought I would publish my mid-week market update early. The Shanghai Index moved into bear market territory by declining 20% on a peak-to-trough basis overnight. The SPX is testing its 50 day moving average (dma). Europe is struggling as both the FTSE 100 and Euro STOXX 50 have violated near-term support levels.

Is this a warning that the bull is dying?

I have some good news and bad news. The good news is the bull market is still alive. The SPX is undergoing a correction, but it remains in an uptrend within a range-bound consolidation that began in February.

In addition to the above chart showing the SPX in an uptrend, a number of market internals indicate that the bears have not gained control of the tape. Consider, for example, the relative performance of defensive sectors. Consumer Staples stocks are still in a multi-year downtrend relative to the market, and Utilities appear to be trying to be bottom, but they have not shown any inclination to stage a relative breakout beyond their consolidation band. 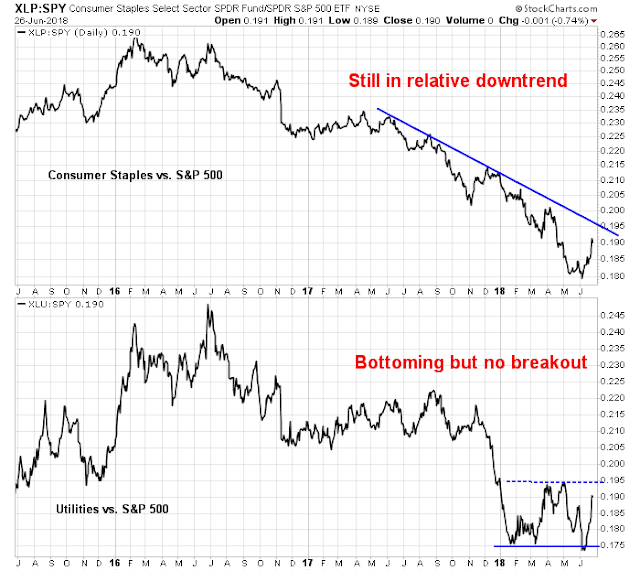 One other clue about market direction comes from the performances of Financial stocks. The sector has been lagging the market lately, but why are the high-beta broker-dealers beating the sector? Broker-dealer stocks have historically tracked the returns of the sector in general, and in a bear phase, you would expect them to show greater weakness. Instead, they are outperforming.

In short, these charts indicate that the intermediate term outlook for US equities remain bullish.

Bottoming, but not THE BOTTOM

Here is the bad news. Monday’s selloff created too much technical damage for the market to make a V-shaped bottom. In particular, market leadership such as large cap NASDAQ stocks are rolling over. The NASDAQ 100 has breached an uptrend on both an absolute basis and relative to the market. 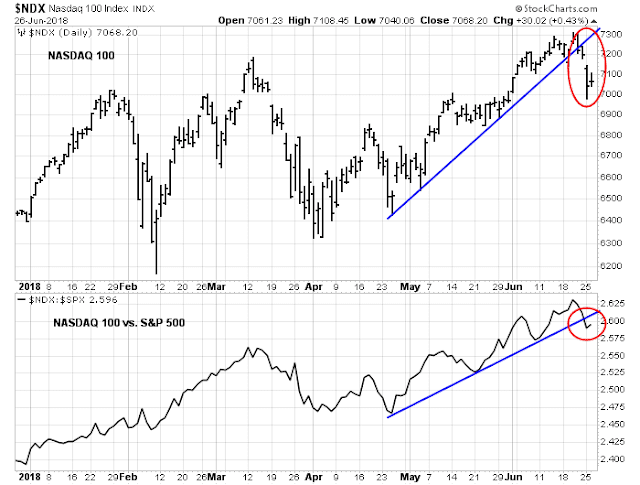 Equally serious is the breach of the relative uptrend by the price momentum factor. Assuming that the bull run were to continue, we will have to see a transition from Tech and momentum to another market leader.

One candidate for continued leadership are small caps. The performance of small cap stocks, which have also been market leaders, is more constructive. The Russell 2000 violated an uptrend line on an absolute basis, but its relative uptrend remains intact. However, small caps comprise a tiny weight off the overall market, and they cannot carry the rally by themselves. 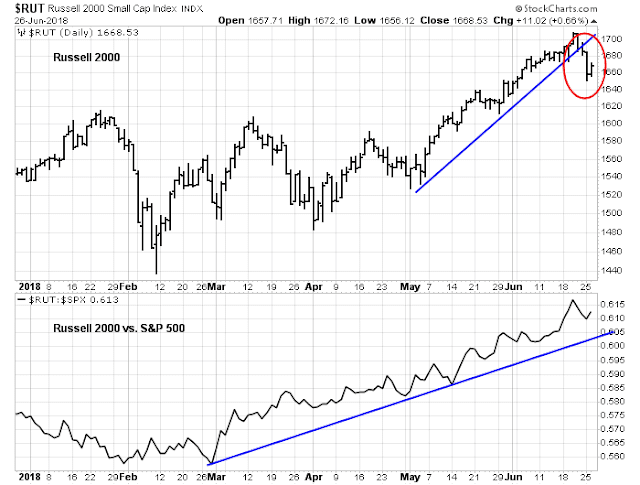 While the intermediate term structure is still bullish, these trend violations have created sufficient technical damage that cannot be fixed with a simple V-shaped bottom. The most likely scenario is the market undergoes several days of choppiness that end with a second test of the previous bottom before it can stage a sustainable rally.

I tweeted the signs of a setup for a buy signal on Monday when the VIX Index rose above its upper Bollinger Band (BB). Past reversions of the VIX below its BB have been good trading buy signals. I would also point out that in two of the three past instances when these signals have occurred in the last six months, the market weakened after the buy signal to retest the previous lows before rallying. The retests were accompanied by positive divergence on RSI-5. 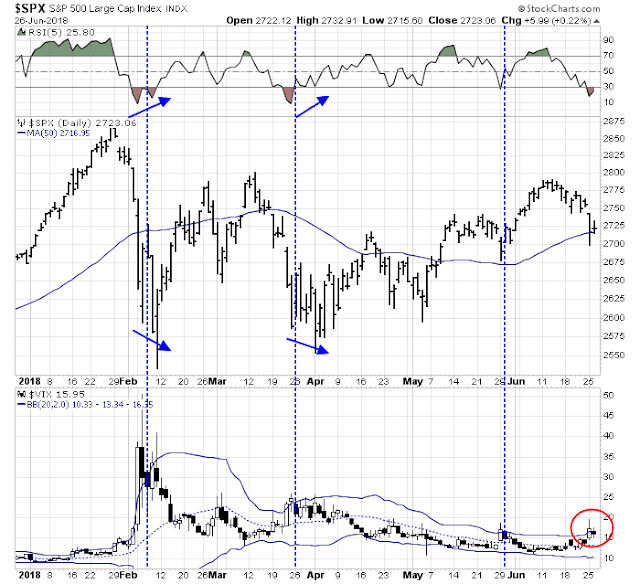 The combination of bullish intermediate backdrop, high levels of technical damage, and short-term oversold readings all point to a similar pattern of rally and retest of the lows.

Subscribers received an email alert that my inner trader had covered all of his shorts and taken an initial (small) long position. He will be waiting for the retest in the next few days to add to his long positions.

One possibility for the timing of a retest of the lows could occur this coming Monday. In the past, the stock market has weakened on days when the Fed has conducted its Quantitative Tightening programs when securities were allowed to mature and roll off its balance sheet (see Offbeat Thursday and Friday forecasts). According to the New York Fed, the next big QT day is June 30, 2018, when over $30b of Treasury securities will be maturing. As June 30 is a Saturday, the market effect would not be seen until the next trading day, which is Monday. 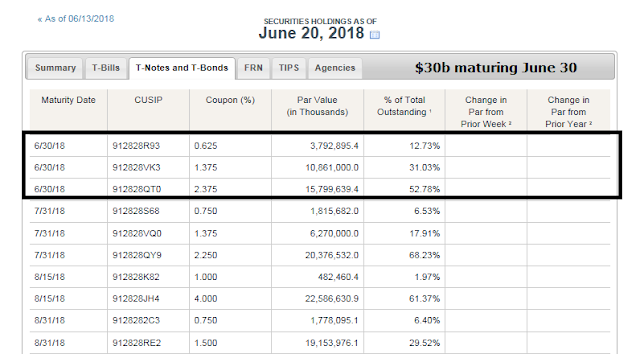 My inner trader has taken profits on his shorts and taken a long position, but the commitment is not large.