An odd paradox in defining this moment in politics: The more President Trump does, says and tweets outrageous things, the more his critics go bananas and the better he does in the polls.

Indeed, Gallup’s tracking poll of presidential approval has been steadily rising for much of this year. CNBC also reported that a majority of Americans approve of Trump’s handling of the economy for the first time. 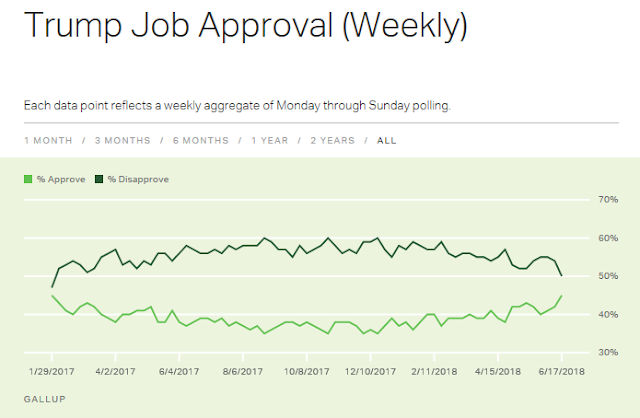 Axios went on to state that this strategy is risky because it is entirely dependent on energizing his support base:

The rise in Trump’s numbers, and the shrinking Democratic advantage in House races, are reinforcing Trump’s worship of his own instincts on policy.

When does the piper get paid?

One example of Trump’s electoral approach is his latest tweet that raises trade tensions with allies that spooking the markets today. 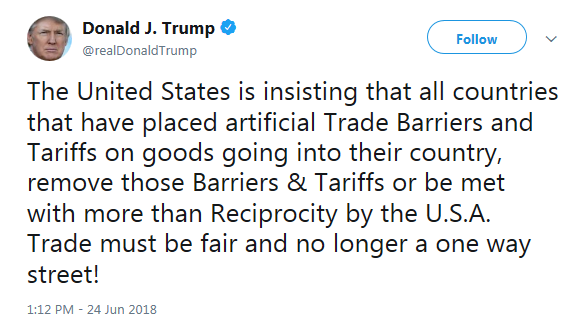 While the theme of unfair trade may play well with his base, the real pain in the developing trade war hasn’t been fully felt in America’s heartland. Nevertheless, Reuters reported that anxiety levels are rising.

“A lot of people in the ag community were willing to give President Trump the benefit of the doubt,” said Brian Kuehl, executive director of Farmers for Free Trade. “The reason you are seeing people increase the pressure now is because the pressure is increasing on them. Now the impact is really starting to hit. It is not something you can just take lightly.”

His group, along with the U.S. Apple Association, will start running television ads on Tuesday attacking Trump’s tariffs in Pennsylvania and Michigan, apple-growing states that could play a role in which party controls Congress after the November elections…

Even before trading partners imposed tariffs, U.S. farmers were facing a tough year. Net farm income was expected to fall 6.7 percent to $59.5 billion in 2018, according to the U.S. Agriculture Department.

Now an even more bearish tone hangs over agricultural markets due to trade spats with NAFTA partners Canada and Mexico, plus mounting tensions with China and Europe.

CNN featured a similar report about the growing unease in farm country:

But in southern Minnesota, where generations of soybean farmers and pork producers are already used to economic uncertainty, Trump’s tough talk on trade has been demoralizing.

The same tariffs that Trump touted on Wednesday have left these growers as collateral damage in an escalating fight with China. Tariffs beget tariffs in the fight, and the Chinese have targeted both American staples, pushing down commodity prices and sinking farm values.

As Republicans and Trump eye Minnesota as a key state for 2018 and beyond, they run the risk that the same tough talk on trade that made Trump so popular in the state might backfire on some of his most loyal supporters.

Time is of the essence, too. While summer is the growing season for soybeans, farmers will begin harvesting in September and October, weeks before midterm elections that will surely be seen as a political referendum on the President.

Moreover, Trump’s industrial tariffs are not hitting their mark. In an era of globalized supply chains, tariffs on intermediate goods have a devastating effect on manufacturing, according to analysis from the Peterson Institute. 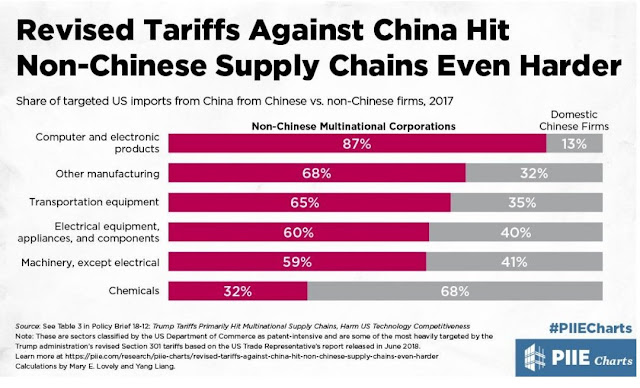 An example of the collateral damage is this story about a Missouri nail manufacturer that is at risk of closing its doors because it is owned by a Mexican company that imports Mexican steel as the raw material for its products.

A spokesperson for a Missouri manufacturer of nails says President Donald Trump’s tariff on steel has cut orders by over 50 percent and may result in the business being shut down, putting close to 500 employees out of work.

According to MissouriNet, Mid Continent Nail Corporation in Poplar Bluff, which is the last major nail producer in the U.S. — has already laid off 60 temp workers and is making plans to lay off 200 permanent employees by the end on July in order to stay afloat. Should the business stay in a death spiral company officials warn they could close by Labor Day.

The report notes that Mid Continent is one of the largest employers in Butler County and eliminating the remaining 440 jobs, which pay an average of $12.50 an hour, would devastate one of the poorest counties in the state.

Already, Bloomberg has reported that Harley-Davidson is considering moving production to the EU as a result of Europe’s retaliatory tariffs.

Trump’s electoral strategy is risky because it trades off the immediacy of rising approval against the costs of tariff protection. It’s a race against time. Can the Republicans get the Trump base to turn out and support them before the trade wars collapses the economic roof? How many Trump supporters are willing to lose their jobs, or bankrupt themselves to Make America Great Again?

Why this matters to the markets

I wrote in my last post that one of the greatest threat of a trade conflict is business confidence (see How close are we to a recession?). In particular, I highlighted a speech by Atlanta Fed president Raphael Bostic about his observations of the evolution of confidence:

I began the year with a decided upside tilt to my risk profile for growth, reflecting business optimism following the passage of tax reform. However, that optimism has almost completely faded among my contacts, replaced by concerns about trade policy and tariffs. Perceived uncertainty has risen markedly. Projects already under way are continuing, but I get the sense that the bar for new investment is currently quite high. “Risk off” behavior appears to be the dominant sentiment among my contacts. In response, I’ve shifted the risks to my growth outlook to balanced.

Business confidence is a funny and fragile thing. Right now, small business optimism stands at its second highest level in its 45-year history. What happens if the trade war effects start to bite, and begin to hurt sales and employment? 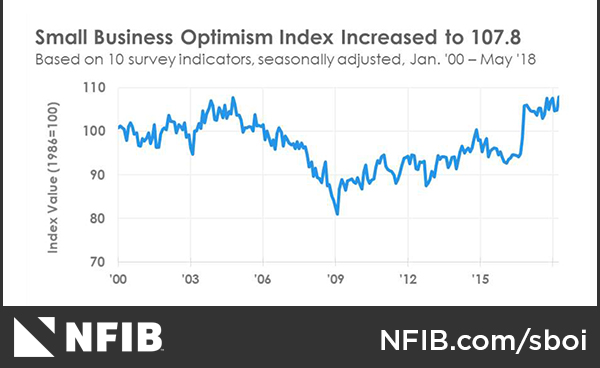 I had also asked in my last post what might happen if the Democrats regain control of Congress. Could the tax cuts get reversed, which would spook the markets? 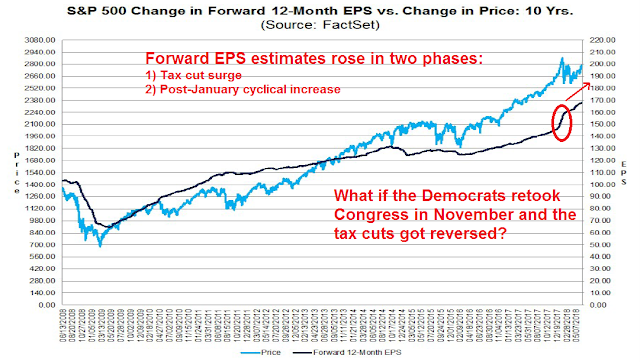 A reader pointed out a Bob Shiller commentary in the New York Times that corporate tax cuts are difficult to reverse unless there is a war. I stand corrected. However, I can easily envisage the Bernie Sanders and Elizabeth Warren wing of the Democrats becoming ascendant after the next election and starting a new war. At a minimum, expect the deregulation drive to end. Another obvious target might be Big Tech such as Facebook, Google, and Amazon, which are becoming pariahs because of the sheer creepiness of their surveillance business models (see Peak FANG?).

As fund flows have followed performance, BAML highlighted the staggering level of fund flows into the technology sector this year. If they come after the FAANG stocks, what will happen to market leadership, and market confidence? 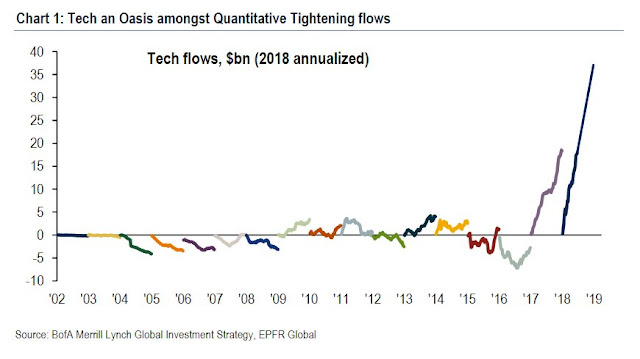 Bottom line: Trump’s electoral strategy creates a high level of market risk. First, the immediate costs of protectionism are becoming clear, and business confidence could tank as a result. In addition, the electoral consequences of a Democrat victory in November also raises the stakes on the prospects of re-regulation, with a particular focus on the FAANG stocks, which are today’s market leaders.

If Trump chooses to stay with this electoral strategy of energizing his base, then expect further market choppiness in the days and weeks ahead.