Tame inflation? Don’t get too complacent! – Humble Student of the Markets

The Treasury market rallied last week when the 10-year Treasury yield tested the 3% level and pulled back. 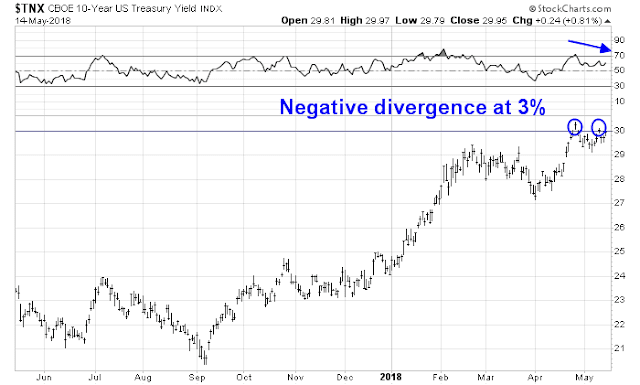 The decline in yields (and bond prices rally) was not a big surprise for a number of reasons:

While the bond market rally is likely to have a bit more leg over the next few weeks, my inclination is to enjoy the party, but don’t overstay the festivities.

The latest Commitment of Traders readings from Hedgopia shows that large speculators, or hedge funds, were in a crowded short in the 10-year Treasury Note. 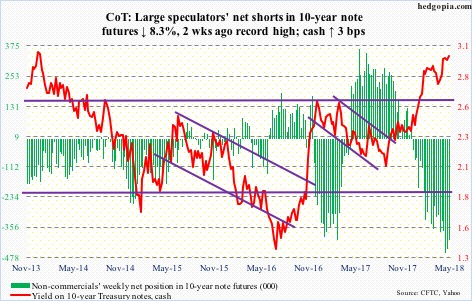 Their positioning in the long Treasury bond also shows a lack of bullishness. 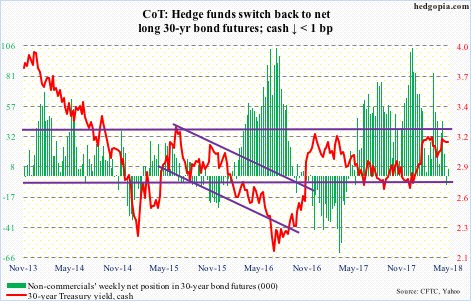 The combination of nervousness over a surge in a fiscal deficit induced Treasury issuance, which tactically put upward pressure on yields, a crowded short, and a positive inflation surprise were enough to spark a bond market rally.

Don’t get too complacent

However, I would advise against getting overly complacent about inflation. Here is the big picture. Inflation expectations (blue line) have been steadily rising, and the Fed has been tightening in response. The spread between inflation expectations and the Fed Funds rate (red line) has been falling, indicating an increasingly tight monetary policy. 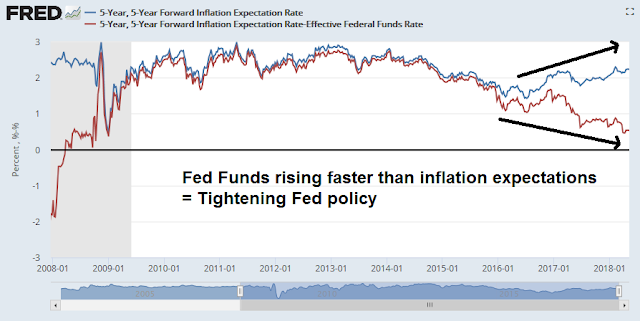 In the short run, inflation surprise began to tick up in early 2018 globally and readings have flattened out. Inflation momentum may be taking a hiatus, but the underlying dynamics still call for more upward pressure. 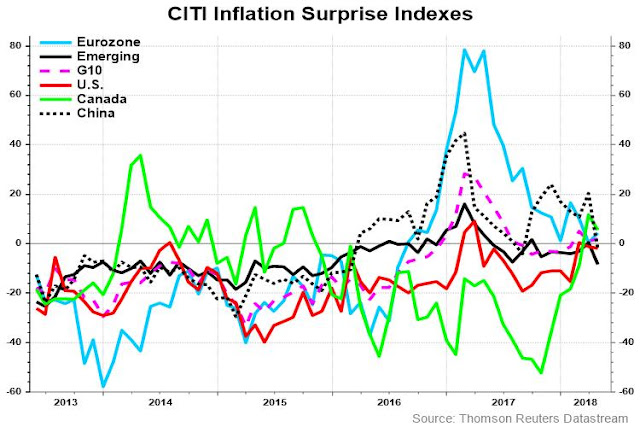 How pervasive is inflation pressure? The New York Fed’s Underlying Inflation Gauge stands at 3.2%, which is well above the Fed’s 2% inflation target. 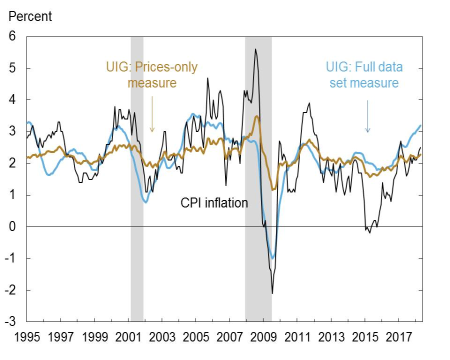 The inflation “tell” from small business

Aside from the top-down analysis, the bottom-up view also shows a story of escalating price pressures. Eric Cinnamond pointed out a long list of 64 companies talking about inflation.

The latest NFIB survey also provides a fascinating window on inflationary pressures. These results are important because they come from small businesses, which are mainly price takers and have little bargaining power, and therefore provide a highly sensitive gauge of the economy. 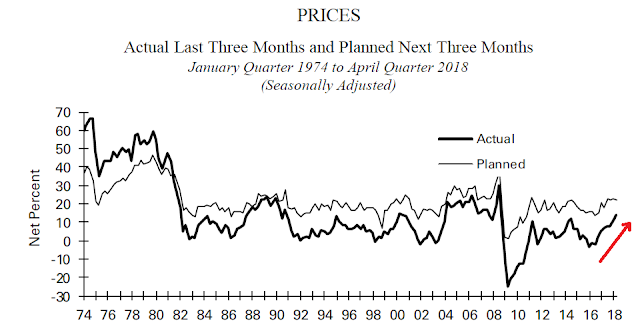 What about the labor market and wages, which is closely watched by Federal Reserve officials? Job openings have been rising steadily since the Great Financial Crisis. 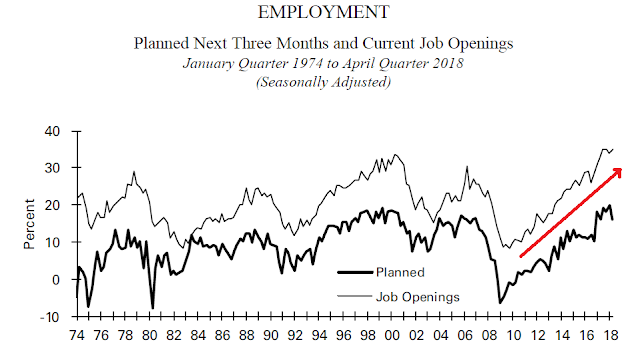 As a consequence, small businesses are seeing increasing wage pressure. Unfortunately, the NFIB survey readings are a diffusion index (net up vs. down), we cannot quantify the actual level of wage increases. 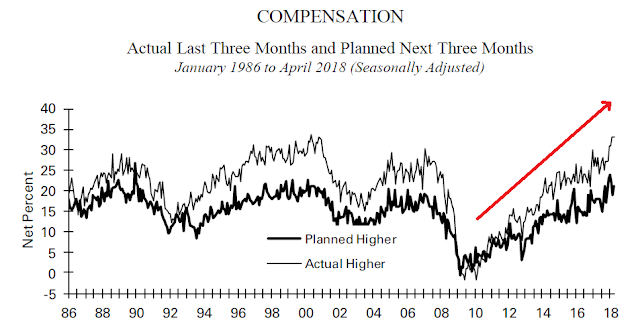 Even though the unemployment rate has been falling steadily during this expansion and now stands at a cycle lows for both the headline and U6 unemployment rates, the lack of wage growth has been a puzzle for many policy makers. 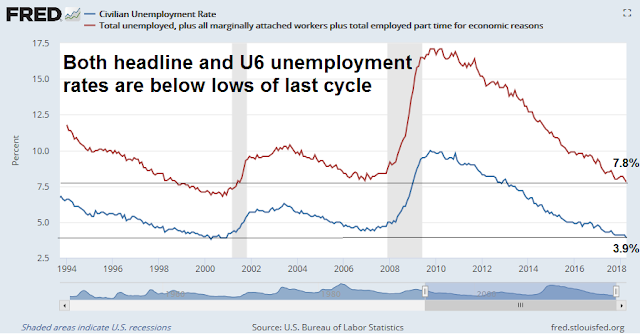 Moreover, this chart from the WSJ is remarkable as the JOLTS report shows that there is one job for every job seeker. 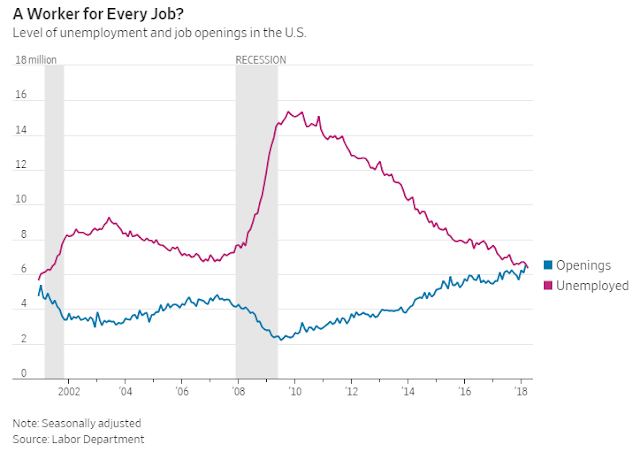 One theory advanced for the lack of wage growth is a labor monopsony, where the number of employers are highly concentrated in labor markets and therefore have greater bargaining power. Marshall Steinbaum at the Roosevelt Institute plotted the average HHI across occupations (and quarters) in each commuting zone. Commuting zones shaded orange and red have HHI greater than 2500, based on the CareerBuilder data. He found that the only labor markets that are unconcentrated by the standard of the Horizontal Merger Guidelines are the largest metropolitan areas. 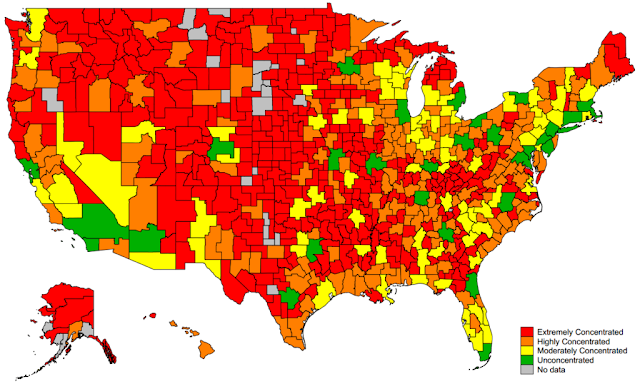 New evidence is showing that employers have more market power than economists had ever suspected. Two papers — the first by José Azar, Ioana Marinescu, and Marshall Steinbaum, the second by Efraim Benmelech, Nittai Bergman, and Hyunseob Kim — find that in areas where there are fewer employers in an industry, workers in that industry earn lower wages. The two papers use very different data sources, look at different time periods and different geographical units, and use different statistical methodologies. But their findings are completely consistent.

I have no strong opinion as to whether the monopsony labor market thesis is correct. But if it is accurate, then we should be able to find evidence of wage pressure from small business surveys, as small businesses have minimal bargaining power.

One of the key indicators that I am watching is the spread between labor compensation (thin line) and prices (thick line). Both have been rising steadily for about two years, and the gap between the two have been stable. This indicates that small businesses have been able to pass through their labor cost increases, which puts upward pressure on inflation. 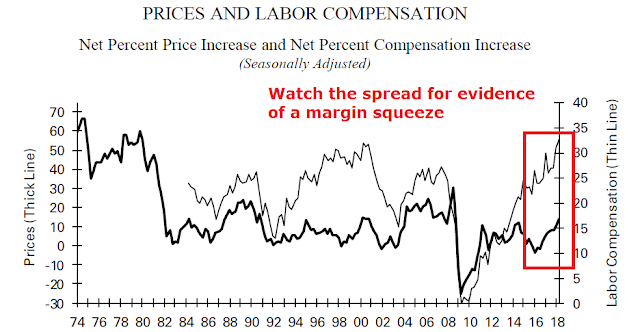 We are not at the point in the cycle where the two lines are converging, which would indicate a margin squeeze and downward pressure on earnings growth.

Asset inflation on the rise

For the last word, consider this chart showing the ratio of the CRB Index to the US long Treasury bond as a way of measuring the inflation/disinflation trend. The ratio bottomed out in early 2016 and it has been rising slowly, and it recently breached a downtrend line that began in 2011. The downtrend breach also coincides with the downtrend violation of the 10-year Treasury yield. This is an indication that the cycle has turned. Asset inflation is on the rise and disinflation is in retreat. 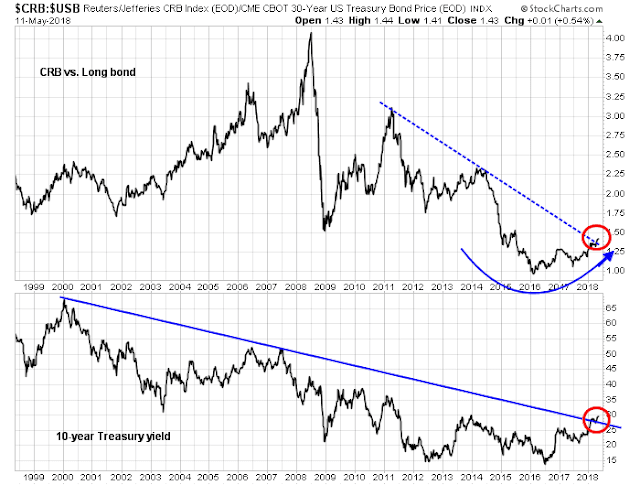 From a tactical perspective, Goldman Sachs recently pointed out that 13 out of 24 commodity contracts that they monitor is in backwardation (red). As a reminder, backwardation is the condition where the near-term futures contract is trading above the long-dated contract. This is usually an indication of a supply shortage which puts upward pressure on prices. 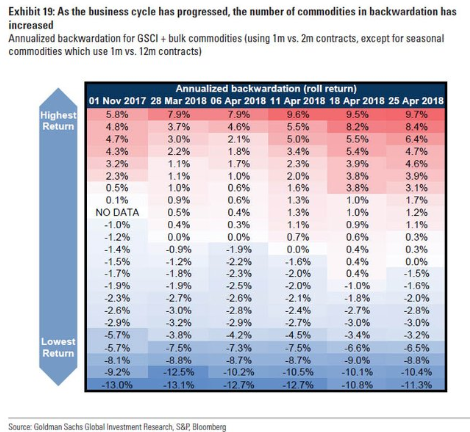 Now tell me that there is no inflationary pressure.

In conclusion, bond yields are tactically falling because of market positioning and a short-term inflation surprise. Recognize these circumstances as a trading opportunity, but don’t mistake it for a long-term trend.

6 thoughts on “Tame inflation? Don’t get too complacent!”