Opportunity from Brexit turmoil – Humble Student of the Markets

There has been much hand wringing over the Brexit process. Deutsche Welle reported that Angela Merkel stated that Brexit would leave a very challenging €12 billion hole in the 2021-27 EU budget. Across the English Channel, Politico reported that Brexit Secretary David Davis assured businesses that “the UK will not become a ‘Mad Max-style world borrowed from dystopian fiction’ after it leaves the EU”.

The U.K. will not undercut EU businesses on workers’ rights and environmental protections, David Davis will pledge on Tuesday.

Speaking to an audience of business leaders in Vienna, the U.K. Brexit secretary will insist that Brexit will not “lead to an Anglo-Saxon race to the bottom,” committing the country to “meeting high standards after we leave the EU.” But he will call for a post-Brexit trade deal in which British regulations are recognized by Brussels as comparable to its own. 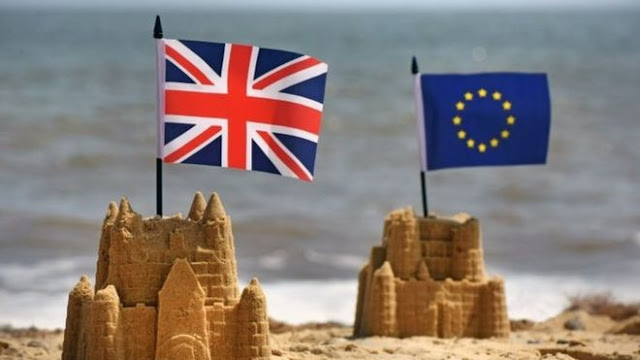 Now we find out that the UK has proposed to stretch out the end of the Brexit transit period from December 2020 to *ahem* as long as it takes (see proposal here).

In other words, we have the usual European chaos and the latest act of European Theatre. But in chaos, there may be investment opportunity.

As a result of the uncertainties surrounding Brexit, investors have utterly given up on UK equities. The latest BAML Fund Manager Survey shows that UK equity allocations have bottomed out at historically minimum levels. 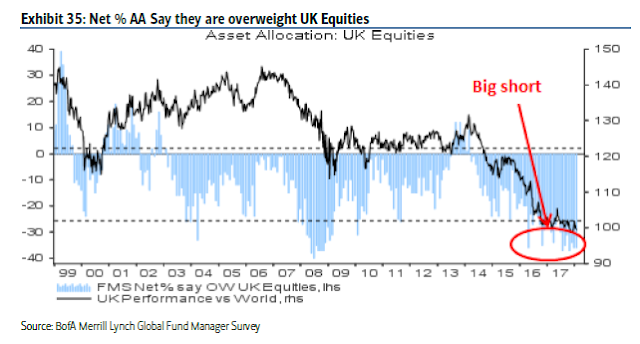 Enter a possible bullish catalyst. Business Insider reported that Pantheon Macroeconomics analyst Samuel Tombs, who was alone in calling the June 2017 general election, thinks there is a 40% chances of a second Brexit referendum, and therefore a 25% chance that Brexit doesn’t happen.

Tombs’ assumption is that macroeconomic conditions drive politics in Britain. His successful 2017 election prediction was based on the correlation between consumer confidence (which was falling before the vote) and whether a sitting government gains or loses seats in a general election.

Since then, he has argued repeatedly that no government can withstand the economic pain of leaving the EU with a bad deal (or a “hard Brexit”), and thus politicians will cave and either choose a soft Brexit or weasel out of leaving the EU entirely.

“It is becoming increasingly clear, however, that none of the forms of Brexit that the EU is willing to tolerate can command enough support from her own party’s MPs, or would please enough of the population for the current government to stand a realistic chance of winning the next election. Mrs. May might find that the only way to break the log-jam and save her premiership is to consult the country again,” Tombs says.

“Accordingly, a second referendum will become an appealing option for Mrs. May towards the end of this year or in early 2019. It would have to be held once she has negotiated a deal with the EU, with the options presented to the public being accepting the deal or staying inside the EU. She could claim that the first referendum was held when the public didn’t have the full facts, and she could argue that the decision was so momentous that the public should be allowed to voice their opinion again. It’s not guaranteed that parliament would vote for a second referendum-at present, Labour does not advocate one-but it would be hard for MPs to claim that the public should be prevented from having another say.”

Mind you, it’s only at 25% chance of a Brexit reversal, but a 40% chance of a second referendum which would spark a risk-on stampede. Tombs likely timing of such a development is late 2018 or early 2019, but the tea leaves would be apparent before the announcement.

1 thought on “Opportunity from Brexit turmoil”