Good afternoon, class. Welcome to another session of “Thinking Straight 101”. Your assignment today is to choose one of the topics below and write an essay for next week’s class:

Each of the stated positions have their own inherent contradictions.

The drumbeats of war

The threat of war is heating up. I had highlighted a Bloomberg articled which stated South Korean “chipmakers produce almost two-thirds of the world’s memory semiconductors” and a prolonged conflict on the Korean peninsula is likely to disrupt global supply chains and spook the markets in a big way.

George Friedman of Geopolitical Futures recently warned of war on the horizon:

The U.S. Navy has announced that the USS Nimitz will leave Bremerton, Washington, on June 1, for the Western Pacific. This is the third carrier battle group to be sent to the region – enough to support a broader military mission – and it will take roughly a week to get to its station, after which it will integrate with the fleet.

So here’s the situation: Soon the United States will have its naval force in waters near North Korea. It already has strategic bombers in Guam, and it already has fighter aircraft in Japan and South Korea.

The United States is preparing for war, which is still several weeks away – if indeed war actually breaks out. Between now and then, diplomacy will intensify. The international community will demand that North Korea abandon its nuclear program and allow inspectors to monitor the destruction of missiles, fissile material and reactors. And after Pyongyang refuses to heed those calls – which it probably will – the United States will have to decide whether it will strike.

The US has certainly assembling a formidable strike force, consisting of three carrier strike forces, plus two submarines, and bombers based in Guam. These assets certain signal a serious intention of air strikes on North Korea should diplomacy fail.

On the other hand, SecDef James Mattis told CBS News on the weekend:

U.S. Secretary of Defense James Mattis says that war with North Korea — should tensions ever come to that — would be “catastrophic.”

“A conflict in North Korea, John, would be probably the worst kind of fighting in most people’s lifetimes,” Mattis told CBS News’ “Face the Nation” host John Dickerson in his first official interview as defense secretary.

The North Korean regime has hundreds of artillery cannons and rocket launchers within range of one of the most densely populated cities on Earth — Seoul, the capital of South Korea, Mattis said.

North Korea is a threat to the surrounding region, including Japan, China and Russia, he said.

“But the bottom line is it would be a catastrophic war if this turns into a combat if we’re not able to resolve this situation through diplomatic means,” Mattis said.

The city of Seoul is right on the border with North Korea, and its population is roughly 10 million people. North Korea has numerous artillery batteries aimed at the South Korean capital, ready to strike the second hostilities begin. Estimates of civilian loss are in the 100,000 to 200,000 range, which represents a casualty rate that is the same order of magnitude as the Hiroshima or Nagasaki bombs – and that’s done with conventional weaponry.

The US lost about 3,000 in civilian casualties in the 9/11 attacks. Are they willing to risk Hiroshima and Nagasaki scale casualties on their South Korean allies? The newly elected South Korean President Moon Jae-in has favored a policy of rapprochement with the North. Is the US willing to attack the North without the approval or cooperation of the South?

Please discuss in your essay the likelihood of an American attack on North Korea in 2017.

For bonus points, CBS News also reported that the Pentagon is preparing the test of an anti-missile system should the North Koreans fire ICBMs at the United States:

Preparing for North Korea’s growing threat, the Pentagon will attempt to shoot down an intercontinental-range missile for the first time in a test this week, with the goal of more closely simulating a North Korean ICBM aimed at the U.S.

The American interceptor has succeeded in nine of 17 attempts since 1999. The most recent test in June 2014 was a success, but that was only after three failures. North Korean leader Kim Jong-un has vowed to possess a missile capable of reaching the U.S., and though he hasn’t yet tested such a missile, Pentagon officials are on their toes.

The current prototype anti-missile system has a historical success rate of 53%. Discuss how credible the North Koreans view the threat of an American attack given this new piece of information.

Marketwatch highlighted a call from technical analysis Jonathan Krinsky of MKM Partners to buy small cap Technology stocks. Small cap Tech has lagged their large cap counterparts, and Krinsky believes that they are ready to show some leadership. 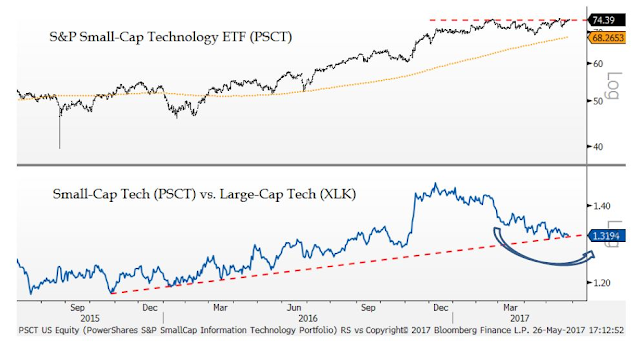 In your essay, disentangle the size effect from the sector effect of the buy signal. Discuss whether the signal is based on a small cap revival thesis, or a small cap technology revival thesis. Justify your conclusions.

I have in the past highlighted the growth debt bubble in China (as an example, see When will the market top out?). 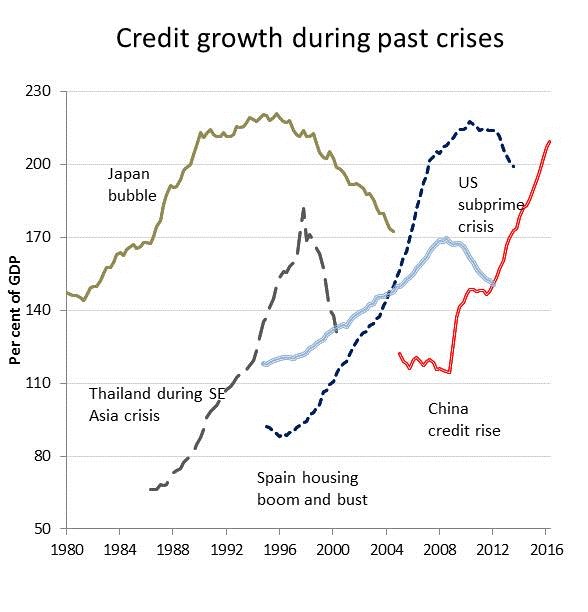 There is a school of thought that the central government will not allow the financial system to collapse into a hard landing. Beijing has many levers available to cushion a crash. The reserve ratio current stands at 17% and there is lots of room for it to fall. Chinese interest rates are nowhere near zero bound and therefore the PBoC has room to lower rates and stimulate the economy. The major banks are all state-owned, and the government will not allow them to fail, and so on.

Those are all valid points, but the presence of a government guarantee doesn’t necessarily mean that the economy will not suffer negative repercussions from a collapsing debt bubble.

Compare the Chinese situation with that of Canada, which has been caught in a property induced debt bubble. Here is how Bloomberg described the Great White North’s economy:

A combination of foreign money, local speculation and abundant credit has driven Canadian house prices to levels that even government officials recognize cannot be sustained. In the Toronto area, for example, they were up 32 percent from a year earlier in April. David Rosenberg, an economist at Canadian investment firm Gluskin Sheff, notes that it would take a decline of more than 40 percent to restore the historical relationship between prices and household income.

Granted, the bubble bears little resemblance to the U.S. subprime boom that triggered the global financial crisis. Although one specialized lender, Home Capital Group, has had issues with fraudulent mortgage applications, regulation has largely kept out high-risk products. Homeowners haven’t been withdrawing a lot of equity, and can’t legally walk away from their debts like many Americans can. Banks aren’t sitting on the kinds of structured products that destroyed balance sheets in the U.S. Nearly all mortgage securities and a large portion of loans are guaranteed by the government.

Excesses in the Canadian mortgage market are, in some ways, not as bad as the American ones at the heighten of the subprime crisis. Canadian mortgages are not non-recourse loans, and the lender can pursue the borrower even after seizing the collateral. More importantly, virtually all residential mortgages are guaranteed by the Canadian government through the Canadian Mortgage Housing Corporation (CMHC), just as virtually all Chinese bank paper is guaranteed by the Chinese government.

For your essay, please discuss the differences between the Chinese and Canadian debt bubbles, and in case the bubble collapses, who pays?

For bonus points: A number of Vancouver residents have complained that while developers have attributed the reason for high property prices is because of lack of supply, but when given permits to develop new buildings, the developers then market the units in Hong Kong instead of to local residents. In one case, the Globe and Mail documented a developer opening a measly 30 day window for locals to buy in before marketing the condos elsewhere. 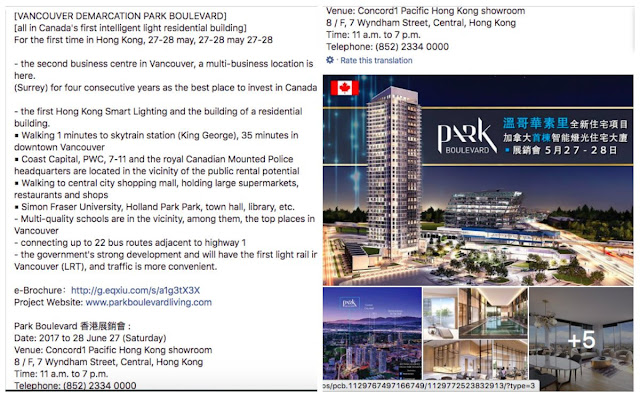 Please discuss the linkage mechanisms between the Chinese economy and the price of Canadian real estate in Vancouver and Toronto.