The island at SPX 2400 – Humble Student of the Markets

Mid-week market update: The SPX rose to a marginal new high this week but broken down through a narrow range due to the latest he said-he said dispute in Washington. The index appears to have formed an island reversal with bearish implications. The market has fallen through two gaps to test its support level at about the 50 day moving average (dma). 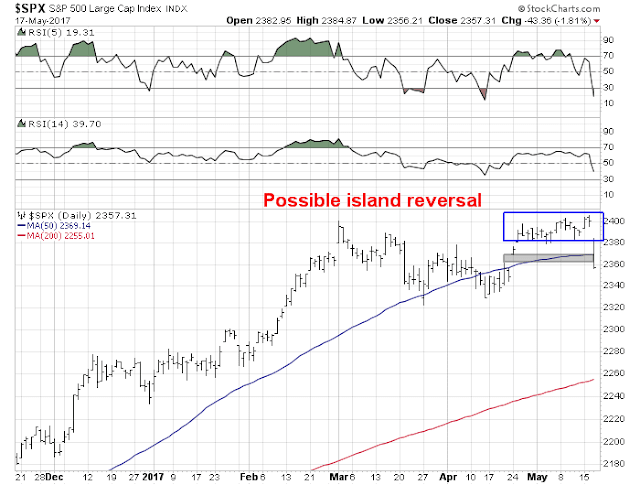 Under these circumstances, it may be prudent to think about these near-term bearish influences which are supportive of the bearish island reversal thesis:

Even as stock prices consolidated sideways, the CBOE equity only put/call ratio (CPCE) had been falling, indicating rising bullishness. As the chart below shows, the absolute level of CPCE is not unusually low, but past episodes of falling CPCE have been associated with rising stock prices (blue boxes). The current decline is unusual in that the market did not advance. The only instance that I could find where CPCE spiked and then fell, but the market did not decline is marked with a red box. In that case, market consolidation was resolved with a correction. 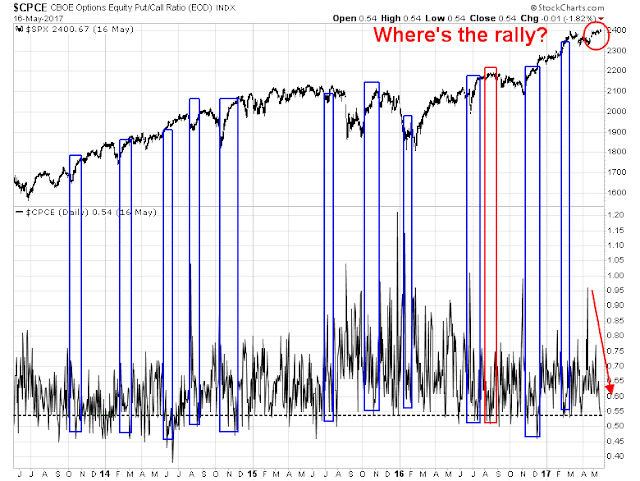 Further to my recent post about the low level of the VIX Index (see How I learned to stop worrying and love the low VIX), Tracy Alloway at Bloomberg pointed out that dealer hedging is suppressing market volatility. However, dealer positioning could also serve to exacerbate the market downside should volatility spike:

While the hedging needs of big banks have helped keep a lid on volatility by providing a backstop to moves in U.S. equities, the analysts note, the rebalancing requirements of the plethora of exchange-traded products now tied to the VIX could pose a risk to that stability. Such ETPs typically buy VIX futures as the underlying index rises, and sell futures as it declines, creating a so-called ‘short gamma’ position.”

Read more here about how products tied to the VIX could be distorting it.

If the VIX were to spike, then Deutsche Bank calculates those ETPs would have to buy a record amount of “vega” — meaning they’d have to put on trades to bet that volatility will increase. “Vega to hedge on a spike has continued its steady rise since the vol increase around U.S. elections, and sits close to $90 million,” a record, they said.

While the market for VIX futures might be able to absorb some of that buying need in the event that the VIX did make a sudden jump, there’s a risk that the proliferation of ETPs, which have yet to experience a significant increase in volatility, could roil the market. It’s not unlike concerns about credit default swaps in the early days, when analysts were unsure what would happen in case of actual defaults — given the volume of CDS outstanding compared with the bonds they were based on.

I have often preached that investors shouldn’t pay attention to politics, other than what happens in national capitals affect trade, fiscal, and monetary policy. However, analysis by Ned Davis Research showed that stock prices have historically struggled when the Gallup presidential approval rating falls to 35%. 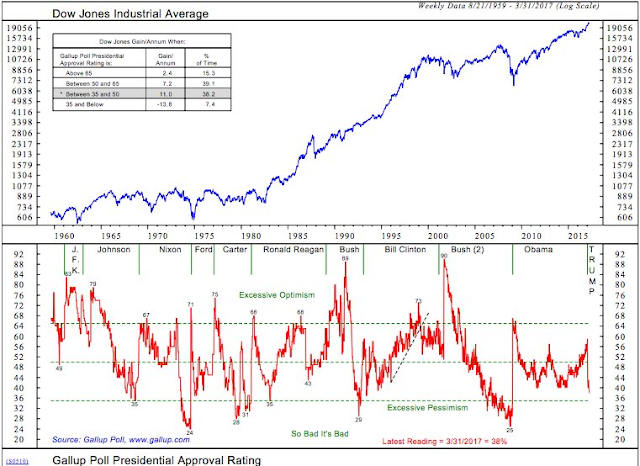 As the NDR study was done using Gallup data, the latest Gallup polls show that Trump’s approval at 38% and falling. 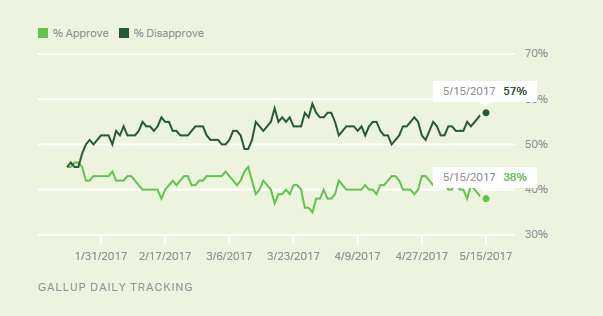 To be sure, Gallup’s polls have understated Trump’s approval ratings when compared to other national polls. The latest polling averages shown by Real Clear Politics and Huffington Post show presidential approval at slightly above 40%.

As political turmoil rises in Washington, presidential approval is something to keep an eye on. Should they fall to 35% or less, it would indicate a loss of confidence by the Republican base, which would jeopardize the prospects of the Trump tax cut proposals.

Despite the near term risks to the stock market, the fundamentals remain upbeat, which should make any correction relatively shallow. The perennially bullish Scott Grannis recently outline several reasons for optimism:

Bottom line: The market may experience some near term turbulence should it break key support level at the 50 dma, but any correction is expected to be shallow. My inner investor would regard market weakness as a buying opportunity.

My inner trader, on the other hand, is still short and enjoying the ride.