Over the years, I have seen numerous analysts using Rydex data to support their investment conclusions. Most of it has been wrong. The latest came from Dana Lyons, whose conclusion I support, but it was based on the wrong methodology. 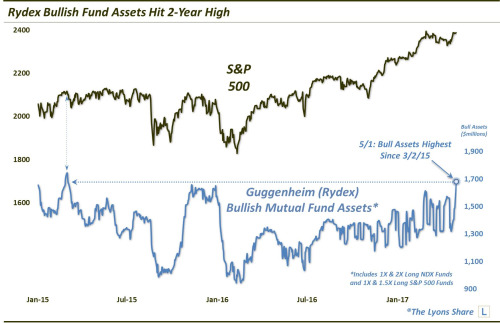 Many analysts use Rydex asset levels as gauges of sentiment. That approach is problematical for a couple of reasons. As the stock market rises, bull asset levels rise and bear asset levels fall. Using asset levels to measure Rydex investor sentiment does not correct for this effect. I have made a number of studies that adjust Rydex funds assets for the rise and fall of market prices, but their results have been less than satisfying.

What matters more is cash flow. What matters the most in sentiment studies is not how much you hold, but what you are buying and selling. Stockcharts used have a have series showing cash flows into Rydex bull, bear, and money market funds, whose bull/bear ratio is shown in the bottom panel of the chart below. As the chart shows, this measure has been very good at flashing buy signals at bearish sentiment extremes (vertical blue lines). By contrast, sell signals using the same metric has been less effective. 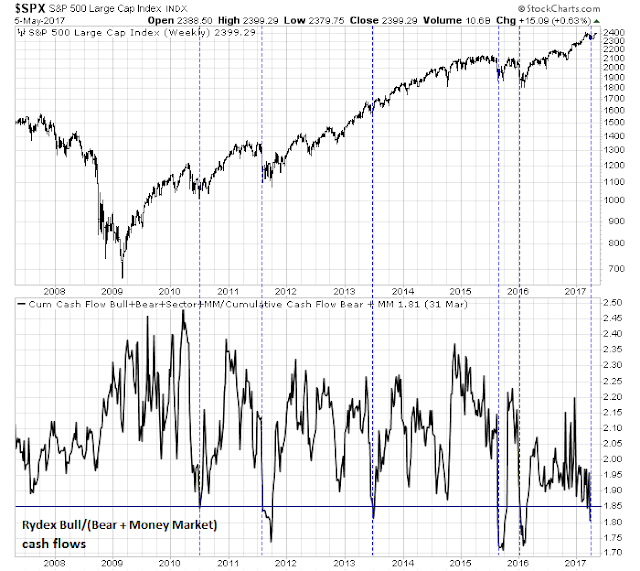 Despite the minor market pullback, it was these off-the-charts model readings that contributed to my tactical buy signal on April 9, 2017 (see Buy the dip!).

Unfortunately, Stockcharts discontinued the Rydex cash flow data series as of March 31, 2017. However, they continue to report Rydex asset levels. I was able to reconstruct a Rydex sentiment model using asset level data. The trick is to watch for large spikes and drops in the bull/bear asset ratio data, which are reflective of either euphoria or panic, as a contrarian signal. The chart below shows the buy (in blue) and sell (in red) signals when the bull/bear asset ratio has either risen or fallen dramatically. 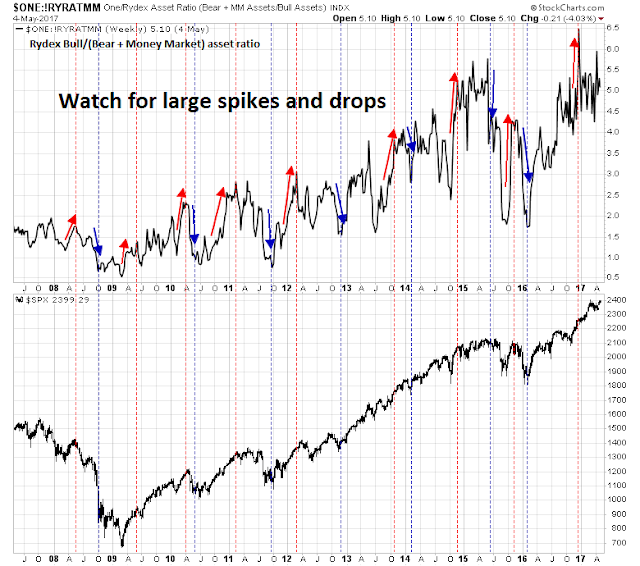 I conducted a study of the bull and bear asset data. Buy or sell signals were triggered if there was a two standard deviation move in the bull/bear asset ratio within a month. As the table below shows, returns were good, though the sample sizes were not that high for such a long backtest period (N=26 for buy signals, N=25 for sell signals). I would further observe that the signal peaks out after about 2-4 weeks. 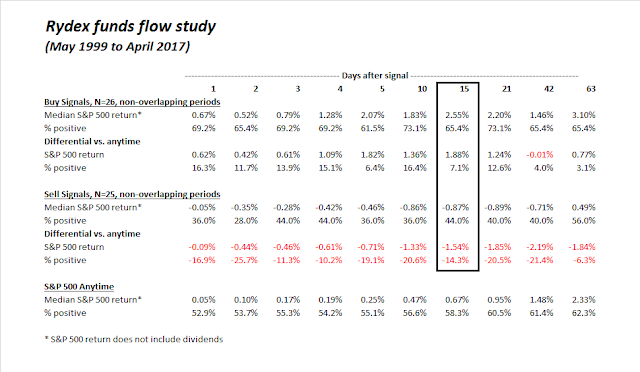 I was also pleasantly surprised to see that this model worked well both on contrarian buy and sell signals. As the above Stockcharts chart based on Rydex cash flow measure showed, sell signals did not work well.

What does the model say now?

The chart below shows the record of this Rydex sentiment model in the past year. This model flashed a buy signal on March 29, which has worked out well. This was followed by a sell signal on May 1, 2017. 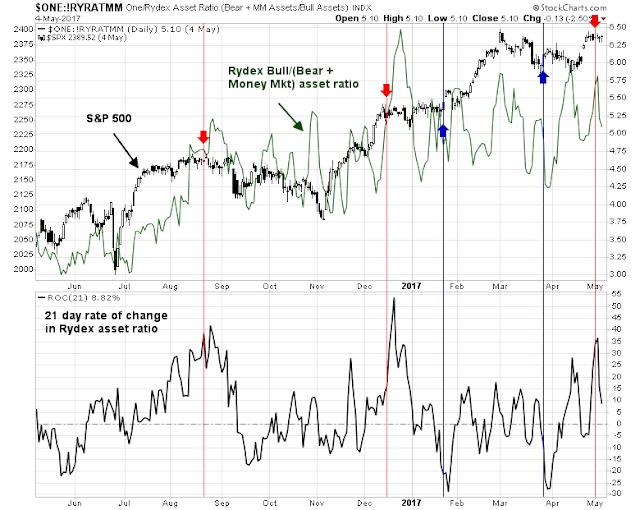 On the weekend, I had called for a period of market consolidation, or shallow pullback as the major stock indices are likely to encounter a bout of round number-itis, where their advance stalls out at round numbers (see Are the Fed and PBoC taking away the punch bowl?). These latest readings from the Rydex sentiment model are supportive of that view.