How a China crash might unfold – Humble Student of the Markets

As Donald Trump prepares to meet Xi Jingping this week, I am reminded of the long-term challenges that face China, namely its growing debt. There have been many analysts warning of the credit buildup, here is this chart from BCA Research is one of many examples. 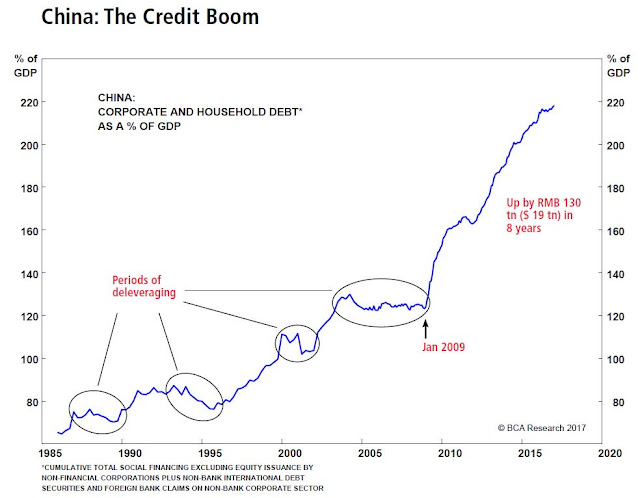 While I am not calling for an imminent crash in China, here is a template of how a collapse might occur.

The case of Huishan Dairy

Investors may be familiar with the story of Huishan Dairy (6863.HK), a vertically integrated dairy company listed in Hong Kong. The shares cratered 85% on March 24 and USD 4 billion in market value evaporated in a single day.

Here is the Bloomberg account of the sorry saga:

A muddled tale of corporate woe has since emerged involving a missing company treasurer, a leverage-happy chairman and serious doubts about the company’s future.

Who went missing?
The executive director who managed Huishan’s treasury and cash operations. The company said on March 28 that its last contact with the director, Ge Kun, was a March 21 letter to Chairman Yang Kai explaining that work stress — heightened by Block’s critical report — had taken a toll on her health and that she didn’t want to be contacted.

So not a good day for the chairman?
It got worse, according to Huishan’s account. That same day, Yang realized Huishan had been late on some bank payments. By March 23, Huishan had arranged an emergency meeting with creditors and government officials in Liaoning province, where the company is based. Huishan said its major lenders, including Bank of China Ltd., expressed confidence at the meeting. But that was before the stock collapsed.

Since the publication of that article, Bloomberg further reported that the company’s four non-executive directors have resigned, and it still can’t locate its head of treasury. Ouch!

To summarize, the company got over-levered, and there was leverage piled on top of leverage. The company missed a payment, confidence collapsed, and the rest is history.

We’ve seen this movie before

My initial reaction was, “So what?” This is how capitalism and free markets work. Leverage is a double edged sword, and Chinese tycoons  have been known to over-extend themselves and crash. The Huishang saga is nothing unusual.

There is more to that story.

Go back a little over a year to early 2016, and let me tell you the story about another Hong Kong listed company named Hang Fat Ginseng (now renamed Qinghai Health). Here is the story from the South China Morning Post entitled Hang Fat – A tale of greed in Hong Kong’s stock market:

This is a classic tale of what has and would happen to the dozens of newly listed companies in the past two years. It is a tale of greed.

Yeung is no stranger to the game.

The so-called “King of American Ginseng” loved to talk about his clever bets on apartments, currencies as well as derivatives…

As Hang Fat’s price shot up, so has the borrowing of Yeung and his family, as suggested by records with the Central Clearing System(CCASS)…

In the meantime, Yeung and his brother like many of the bosses of newly listed companies have made bets with all sorts of investment schemes proposed by their private bankers with money from margin finance. It was jolly good.

By summer, it was all over. The A share market crashed; the yuan depreciated; and Hang Fat’s price dropped 30 per cent.

The brothers pledged more shares to pay up the margin call and to support Hang Fat’s price.

They spent at least HK$220 million buying up Hang Fat between August and December, according to company announcements. They had no choice because the lower the price, the worse the margin calls.

It was futile. The market headed south with the renminbi…

They were forced to sell 6.17 per cent at a 50 per cent discount for a meagre HK$23 million. To who? Surprisingly, it’s the clients of CIS. Yeah it is bloody.

So what? Another story of Chinese tycoons who over-levered themselves and crashed.

Here is the clincher to the story, Bloomberg reported that one of the possible rescuers of Hang Fat was none other than the chairman of Huishan Dairy:

On Feb. 4, following a failed attempt to sell control of the company to another Hong Kong company, the Yeungs announced they were selling 1.23 billion of their own shares to a company run by China Huishan Dairy Holdings Co. Chairman Yang Kai in an off-market deal for HK$23.4 million. Yang sold almost all the shares a day later for HK$77.1 million, exchange filings show. A Huishan Dairy spokesman declined to comment on the transaction.

The stories of Hang Fat and Huishan Dairy illustrates how Chinese corporations are all playing the same game of leverage on top of leverage, and taking the cash to speculate into other “hot” markets, such as real estate and equities. I have no idea when the entire house of cards comes crashing down, but the buildup of debt at the corporate and individual level on top of Chinese local government debt is worrisome.

If and when this collapses, it will likely occur suddenly and without warning. Another concern is the systemic effects of inter-connected firms, and the cascading effects on a single financial accident that could trigger the loss of market confidence. An event like this would probably be accompanied by mass capital flight, a falling exchange rate, and the imposition of currency controls.

Despite this dire scenario of how China might crash, there are few signs of an imminent crisis. In all likelihood, the authorities will do everything in their power to keep the economy growing until the Party Congress this fall. As an example, CNBC reported that China is creating a new economic zone in Hubei province, using the template of Shenzhen and Pudong district in Shanghai. Hubei  Hubei is an area that had been hit by large layoffs, and this initiative is an effort to boost economic growth.

Indeed, the latest update from Callum Thomas of Topdown Charts shows that China’s Manufacturing PMI is pointed up. Moreover, the % of PMI subindices above 50, which indicate growth, are surging. Also see my post from two weeks ago, China’s revival and what it means. 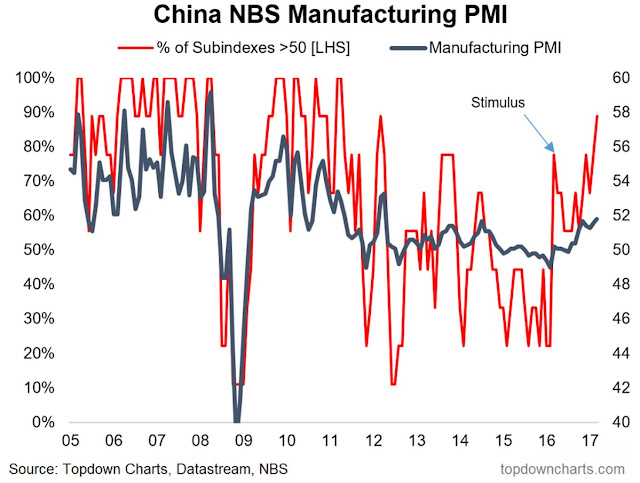 On the other hand, Bloomberg pointed out that default rates have risen, and credit spreads are widening. 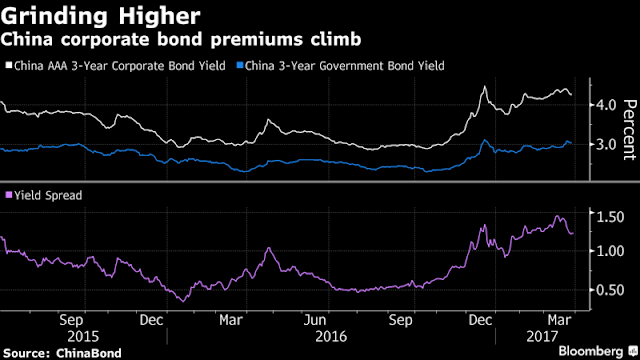 Apocalypse Not Yet, but be aware of the growing risks.