I had been meaning to write about the December Jobs Report, which was released last Friday, but I hadn’t gotten around to it. The report had elements of both good news and bad news.

The good news is the December report showed a solid market. True, the headline Non-Farm Payroll figure missed market expectations, but November was revised upwards, and the positive revision in November was bigger than the December miss. 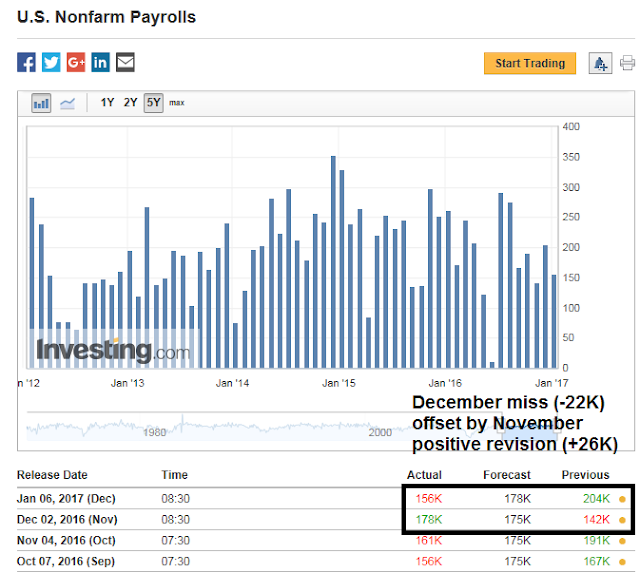 In conjunction with the December Jobs Report, the Council of Economic Advisers released a report indicating that the American economy had added more jobs than other advanced economies in the last eight years (via Business Insider). 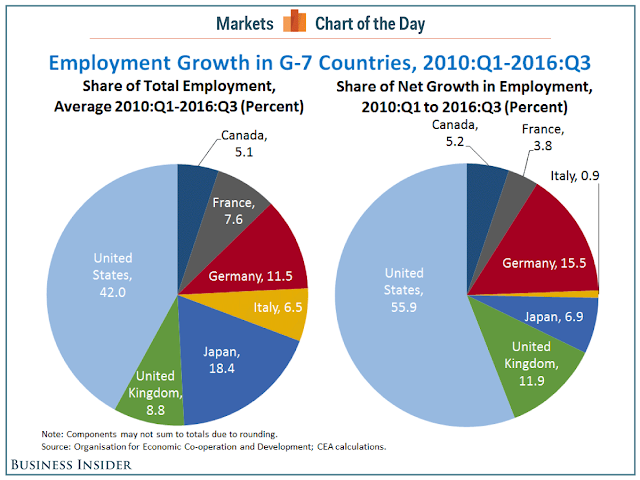 Notwithstanding the political victory lap nature of the CEA`s report, the December Jobs Report should keep the Fed on track with its expectations of three rate hikes in 2017.

Here is the bad news. There are worrisome signs that the economy is starting to overheat. The combination of Fed actions on interest rates and wage pressures on operating margins are likely to be unfriendly to the stock market. Unless the Trump administration comes through on their promised tax cuts in the near future, upside for equity prices will be limited in 2017.

The return of inflation

It was a solid jobs report. One of the more concerning features of the report was the return of wage pressures. YoY growth in average hourly earnings (AHE) rose to a new high for this economic cycle at 2.9%, which is well above the Fed’s 2% inflation target. 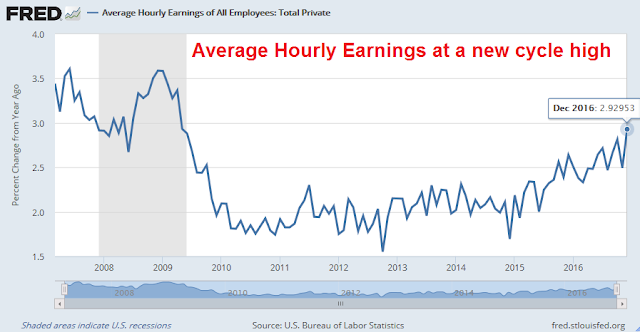 The surge in wage pressures is no surprise to the markets. The bond market’s inflationary expectations have been steadily rising for the last couple of months. 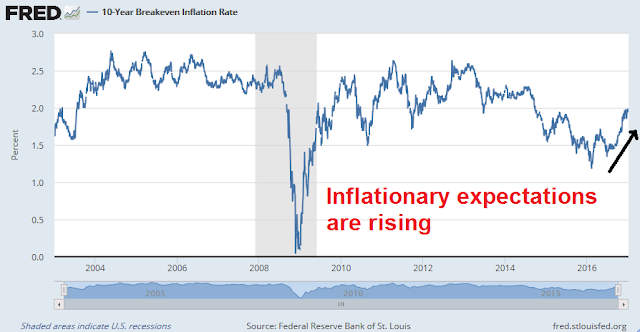 The reflationary trend has not just been isolated to American shores. Frederik Ducrozet constructed a global PMI price pressure index – and it has been surging. 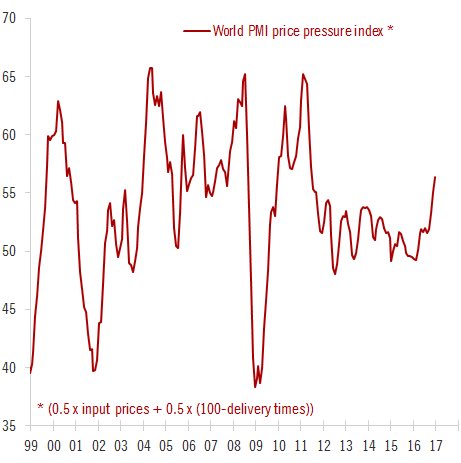 These conditions give the Fed cover to stay on their path of interest rate normalization. Fed watcher Tim Duy analyzed the report and he believes that the risks to the growth outlook are weighted to the upside:

A solid report largely consistent with expectations among monetary policymakers. Hence it should have little impact on interest rate forecasts for the coming year. But watch out for upside risks to the outlook; the economy gained some traction in the final months of 2016. It is reasonable to believe that traction will hold in 2017.

It’s not just the Fed that equity investors have to worry about. As the economy moves towards full employment, the upward pressure on wages from the labor shortage is likely to start to compress corporate operating margins. Variant Perception observed that rising real unit labor costs (note inverted right scale) tend to lead corporate profits by about two quarters. 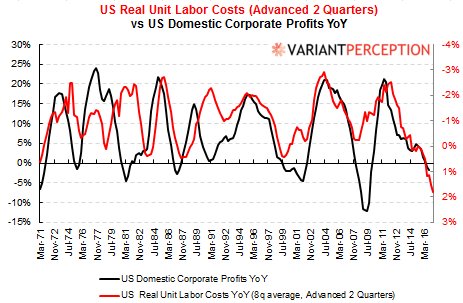 In the absence of other factors, such as the Trump tax cuts, earnings growth is likely to come under pressure. For now, Factset reports that the Street has jumped on the global reflation theme and forward EPS is rising. In fact, the pace of downward earnings guidance has been lower than usual. 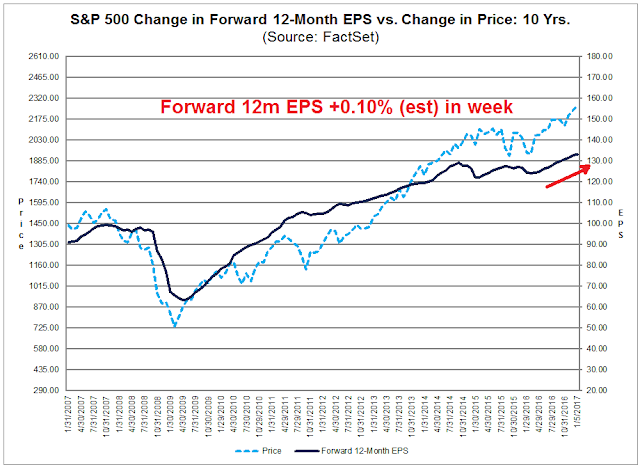 The risk of a negative surprise from falling operating margins should rise should labor market conditions stay tight.

Even as the Fed prepares to raise rates, there is a risk that the Fed may mis-read the economy over-tighten a maturing expansion into recession. An area of concern is the loss of momentum in NFP growth. In the past, the deceleration of YoY NFP growth to 1.5% has been an ominous sign for both the economy and the stock market. 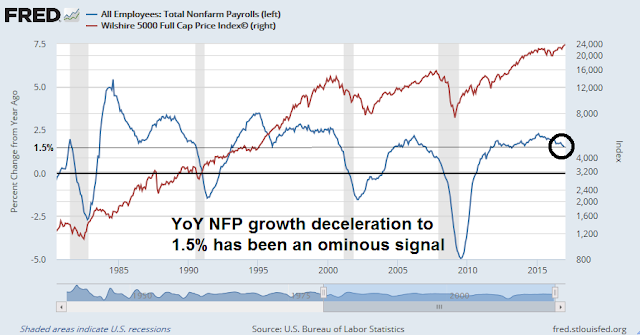 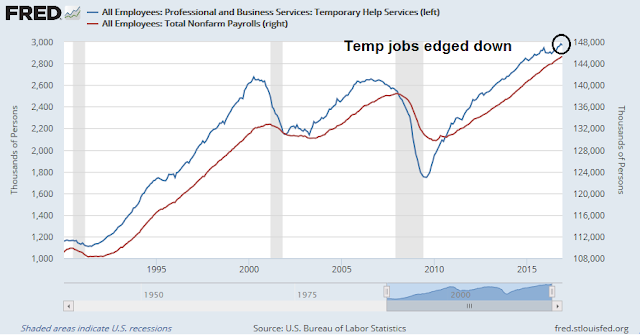 The interest rate components of the long leading indicators improved enough in the last two weeks to score neutral. The yield curve and money supply as well as real estate loans remain positive. The big news, however, is that both purchase and refinance mortgage applications have now turned negative.

The coincident indicators remain mixed. Steel, consumer spending, and tax withholding are positive, and rail mildly so. The BDI is neutral. The Harpex shipping index, the TED spread and LIBOR remain negative.

Seasonality will continue for one more week to be a huge factor in the volatility of the data. This week I am particularly discounting the strong staffing number. That being said, the shorter term 6 month forecast remains strongly positive (barring a trade war). The 12+ forecast is murkier now with mortgage applications finally turning negative. How long the post-Brexit strength in the monthly housing numbers continues will be important to watch.

If the Fed were to raise rates three, or maybe even four times, this year, it risks committing a policy error by looking in the rear view mirror of inflationary pressures and tightening just as the economy rolls over.

All eyes on the Trump administration

In short, market expectations for the Trump administration’s policies are high, even though Trump hasn’t even taken office. The bull case for equities rests on a combination of global reflation, Trump tax cuts, and deregulation. The bear case is based on the risks of a trade war (see How Trump/Navarro could spark a market crash), a hawkish Federal Reserve, and wage pressures on corporate margins.

David Kostin of Goldman Sachs (via Josh Brown) quantified the effects of these factors on earnings in the chart below, though he did not take into account the effects of high wage rates. As well, rising interest rates have a relatively minimal effect on earnings, but affect stock prices through changes in the P/E ratio. As the chart shows, the effects of tax policy is significantly higher than most of the other factors (annotations in red are mine). 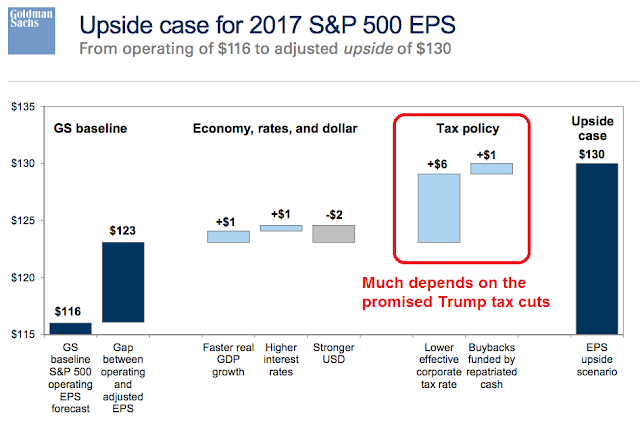 In other words, Trump better come through on those tax cuts, or the stock market will see a very rough 2017.