Trend vs. counter-trend: Who wins? – Humble Student of the Markets

Mid-week market update: Traders who rely on technical signals use two main kinds of trading systems. They either rely on trends or counter-trend signals. Trending systems capitalizes on spotting a bandwagon and jumping on it before the crowd to ride it to profit. By contrast, counter-trends systems depend on finding market extremes and positioning for the pending reversal.

The market is currently strongly trending and staged important breakout to new highs. However, it is also stretched on a number of measures and this condition is occurring in a number of asset classes. An inter-market analysis suggests that the markets are poised to either pause or correct their strong moves.

Let me show you a couple of examples.

Bonds: Would you lend money to Donald Trump?

Consider the sell-off in the bond market. The chart below shows the spread between the 10-year Treasury yield and the 10-yield Bund. This spread has rocketed to new highs despite a tanking EURUSD exchange rate (bottom panel), which is somewhat paradoxical as a rising USD “should” bring down UST yields. 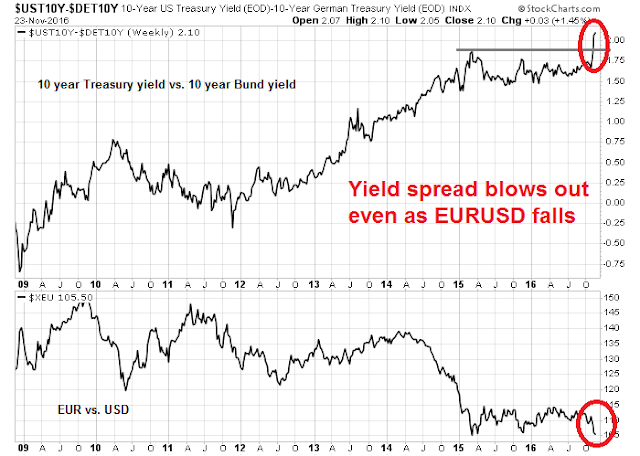 While the spread has been widening before the election, one explanation of the blowout in UST-Bund spread can be answered by the question, “Would you lend money to Donald Trump? If not, then at what price?”

The technical breakout is this spread is an example of a strong market trend. The secular bull bond bull is dead. Inflation is returning.

On the other hand, the chart below shows 20+ year Treasury ETF (TLT). We can see that TLT is exhibiting bullish divergences on RSI-5 and RSI-14 even as price weakens. Long Treasury bonds are hated and unloved. 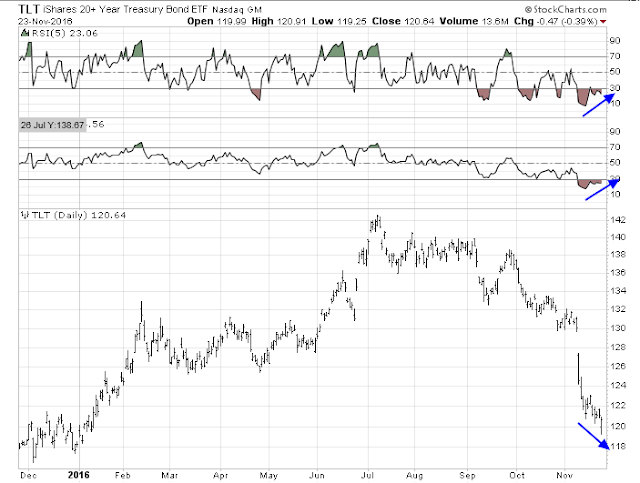 Stocks: Behavior at record highs (and round numbers)

The stock market responded to the election with a powerful surge as investors and traders jumped on the reflationary growth theme. In the wake of the rally, Brett Steenbarger made an astute observation when he analyzed the number of ETF units outstanding in SPY and sector ETFs:

As you might expect, net share creation has exploded in the financials ETF (XLF) and industrials ETF (XLI), rising over 30% since the beginning of November. Over that same period, we’ve seen net share destruction in the utilities ETF (XLU), reflecting the move out of higher yielding stocks in the face of the bond market decline and higher rates. (All numbers from the State Street site). What I find interesting is that the share creation in SPY–the market overall–more closely resembles the pattern of the strongest sectors, not the weakest ones. That suggests that it’s not just sector rotation impacting the market, but actual net dollars being put to work in stocks.

In other words, the share creation pattern suggests that there isn’t just sector rotation going on, but there are strong fund flows going into the stock market. That’s an indirect signal of an intermediate bull trend.

On Monday, the Dow, SP 500, NASDAQ Composite, and Russell 2000 all made fresh record highs together – and that feat was repeated on Tuesday. As Michael Batnick pointed out, all-time highs are generally bullish (it`s just that you have to watch out for that last ATH). 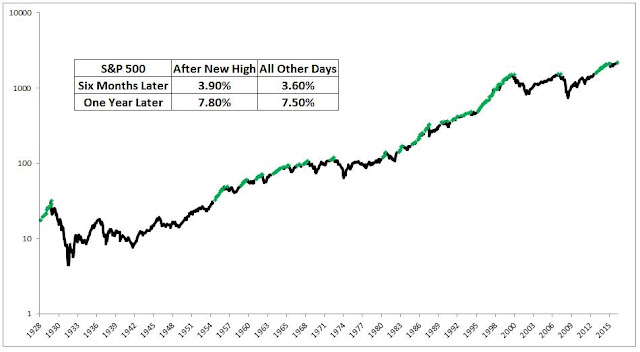 I was surprised to see analysis from Sentiment Trader showing that the market tends not to behave well when “the big four” indices simultaneous make all-time highs (annotations are mine). If history is any guide, the market is likely to pause and pull back for 1-2 weeks before rallying further. 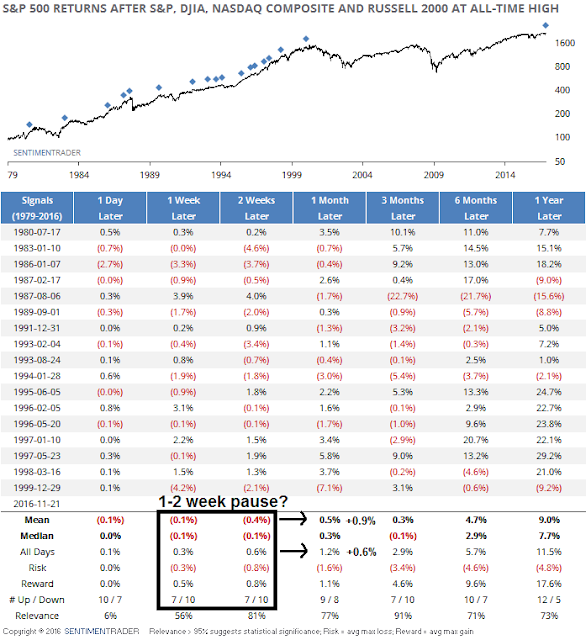 As well, Schaeffer’s Research observed that stock indices tend to have trouble when they rally through round numbers, such as DJIA 19000 and SPX 2200. Their historical study going back to 1999 also indicates that the Dow underperform for between 1 week and 1 month before resuming its uptrend. 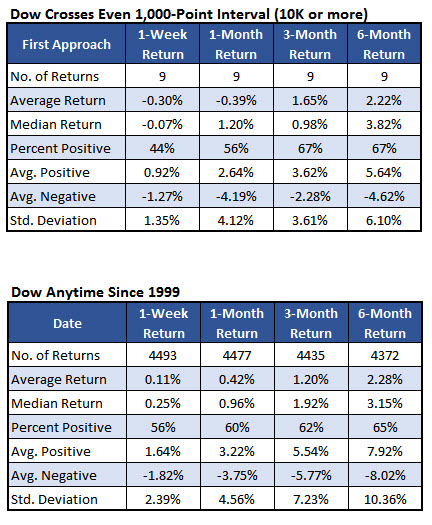 Indeed, breadth analysis from IndexIndicators shows that net 20-day highs-lows, which is an intermediate term trading indicator with a 1-2 week time horizon, is overbought. 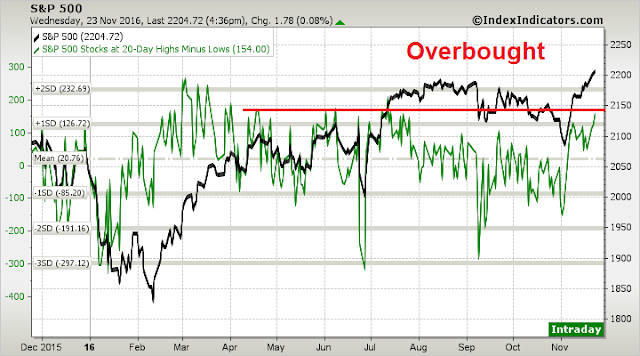 Time for a breather

To conclude, the inter-market ducks are all lining up in a row. Simon Maierhofer, writing at Marketwatch, made the case that three markets are ripe for a short-term reversal, namely the US Dollar, gold, and bond prices. When I put it all together, these are signals that the powerful macro trends that we have seen in the last couple of weeks are due to pause and correct. Expect a 1-2 week consolidation or pullback before the trend can resume itself.

My inner investor remains bullish on equities. He regards these short-term moves as blips that can be ignored. My inner trader took profits in his long positions last week and remains in cash.

2 thoughts on “Trend vs. counter-trend: Who wins?”