The Italian referendum = Next populist domino? – Humble Student of the Markets

Ian Bremmer of the Eurasia Group recently tweeted the following political calendar in Europe. After the surprising Trump win, the market is closely watching for electoral surprises. Next up is the Italian referendum on December 4, 2016, in which PM Matteo Renzi has asked for revisions to the constitution in order to break the endless cycle of deadlocked and changing governments. Italy has seen over 60 governments since the Second World War. Austria will also hold its presidential election on December 4, in which far-right candidate Norbert Hofer is leading in the polls. The results are mitigated by the largely ceremonial nature of the presidential post.

The Italian referendum and Austrian vote will be followed by an election in the Netherlands, in which anti-EU Freedom Party led by Geert Wilders is leading in the polls. The French presidential election will be held in the summer, where the anti-establishment candidate Marine Le Pen is expected to poll second heading into the run-off race. Finally, Germany will hold its election in late 2017. 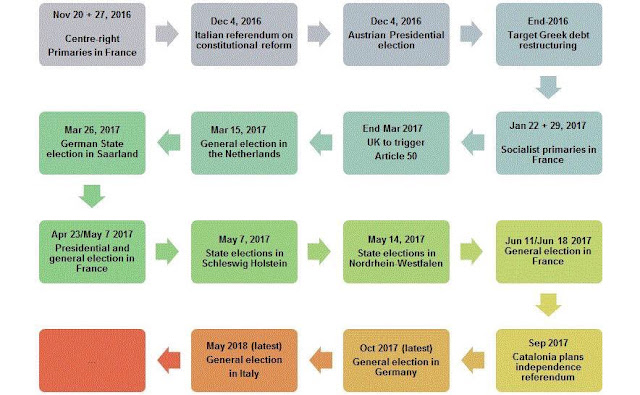 Will Italy be the next domino to fall?

Bloomberg reported that the latest polls show the “no” side to hold a consistent lead in the Italian referendum. That’s bad news for PM Renzi, who has hinted that he will resign should the “no” side win, which would lead to further political disarray in a major EU member state. 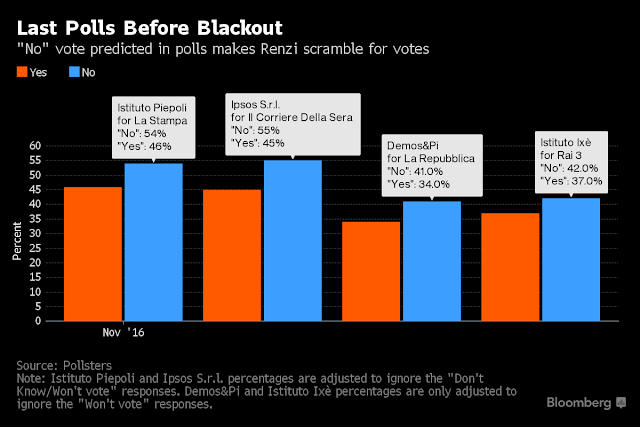 The situation is not as dire as it sounds. Currency strategist Marc Chandler pointed out that there are a couple of mitigating factors in Renzi’s favor:

First, there is more than four million expats eligible to vote. They are thought likely to support the referendum. However, only around a third are expected to vote. This could make a difference in a close contest, but the recent polls show a 5-7 point lead by those wanting to reject the referendum.

Second, the wording of the referendum has been subject to much dispute and legal challenges. It is worded in a way that focuses on the favorable element. Some think this could be worth a few percentage points in Renzi’s favor depending on the number of undecideds there are at that late date who decide to vote. Note that most recently the undecided have been breaking to the “No” camp.

What if Renzi were to lose? The market’s nightmare scenario would see political paralysis in Italy, followed by elections in which the anti-EU Five Star Movement take control.

Investors should relax (and have a glass of Chianti). As I pointed out before (see Silver linings in Europe’s dark political clouds), the Five Star Movement has shown a mixed record in local government, which detracts them from their chances to form the next government. Even if it were to win the next election, the Italian parliament is likely to be gripped by the same political paralysis that plagued the last 60+ post-war governments.

Moreover, an August poll showed that only 28% of Italians supported leaving the EU. While a referendum defeat for Matteo Renzi cannot be characterized as a market friendly event, the alternative is not a disaster either. Similarly, a victory by Geert Wilders in the Netherlands may give a a plurality in parliament, but he will likely have great difficulty in finding a governing partner because of his extremist leanings.

As the charts below shows, Italian stocks are testing key relative support levels against Eurozone equities after rallying through a relative downtrend. 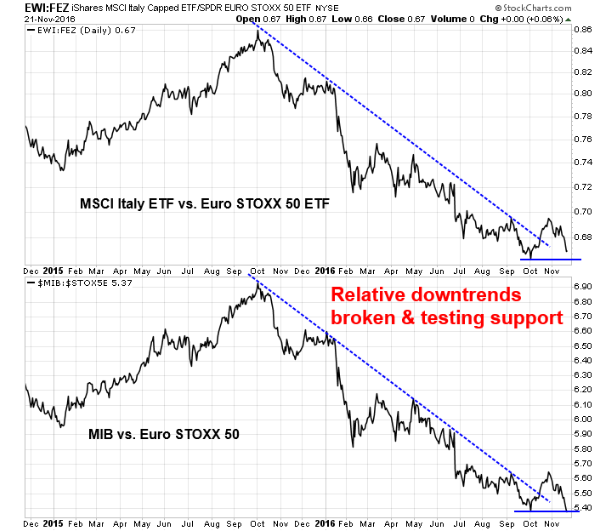 With the markets hyper-sensitive to electoral results, I would argue that any negative reaction to a “no” vote in the Italian referendum should be considered a buying opportunity. The return spread between Italian equities and the rest of the eurozone may widen because of some positive political news on the weekend. First, Angela Merkel announced that she will seek re-election as chancellor, and she has been viewed as a source of political stability. In addition, former French President Nicolas Sarkozy failed in his nomination bid for another term after moving to the right to try and attract the anti-immigration vote. Sarkozy had polled as a weak candidate in a head-to-head contest against Marine Le Pen.

When investors analyze European macro and political developments, they need to be aware that European theatre is always melodramatic. A crisis erupts. There is much sound and fury. In the end, the elites always manage to fudge a solution.

Just keep in mind that Europeans are great at mitigating tail-risk. The flip side of that coin is the structure of the European Union is not set up to address the deeper growth malaise that afflict the region.