Trump vs. the Fed: War or détente? – Humble Student of the Markets

In many ways, Donald Trump is an economic enigma. Candidate Trump has in the past advocated wildly contradictory positions on the campaign trail. Sometime the market is left not knowing what to think.

One little discussed topic but important topic is Trump’s relationship with the Federal Reserve. What kind of Fed would he like to see?

Candidate Trump assailed the Fed in September 2016 for keep rates too low (via Reuters):

Republican presidential nominee Donald Trump, who has previously accused the Federal Reserve of keeping interest rates low to help President Barack Obama, said on Monday that the U.S. central bank has created a “false economy” and that interest rates should change.

“They’re keeping the rates down so that everything else doesn’t go down,” Trump said in response to a reporter’s request to address a potential rate hike by the Federal Reserve in September. “We have a very false economy,” he said.

“At some point the rates are going to have to change,” Trump, who was campaigning in Ohio on Monday, added. “The only thing that is strong is the artificial stock market,” he said.

An easy monetary policy helped the incumbent party by stimulating growth. When he becomes President Trump in January, does he still want the Fed to take a more hawkish approach to monetary policy? 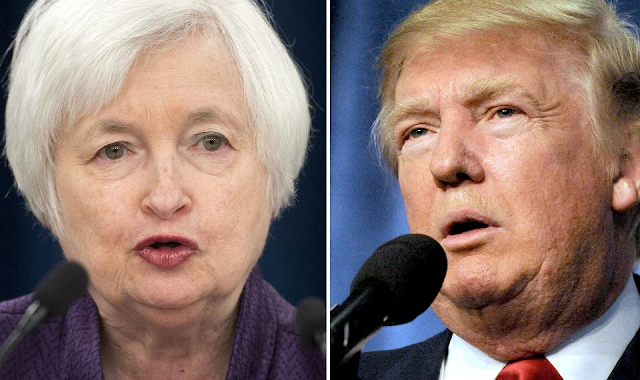 I wrote in my last post that Donald Trump appears to have embraced classic Keynesian stimulus (see The Trump presidency: A glass half-full). Since the election, the markets have adopted a risk-on tone as as inflationary expectations have surged in anticipation of tax cuts, infrastructure spending, and higher deficits. That’s the classic formula for Keynesian stimulus. 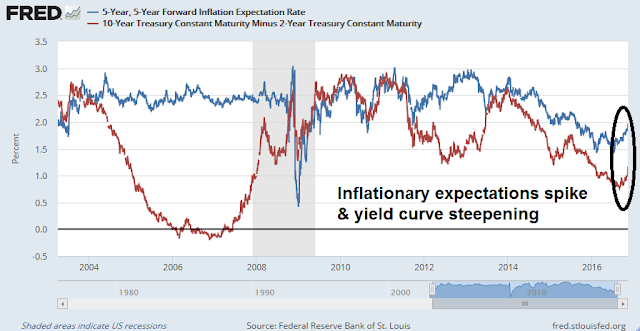 Wait a minute! Trump’s economic advisers coming from the Austrian school of economics. Their sound money beliefs have led them to the conclusion that Fed’s easy money policies are unduly distorting the economy. Vice President Mike Pence has been an advocate of a return to the gold standard. Bloomberg also reported on Pence`s anti-inflation views:

Before becoming governor of Indiana and now presidential candidate Donald Trump’s newly picked running mate, Pence was a key lawmaker among House Republicans whose criticism of the Fed built to a crescendo in 2010 as the central bank began a $600 billion second round of bond purchases to avert deflation and boost employment. Pence said at the time that the quantitative easing would monetize the U.S. government’s debt and ignite inflation.

Pence — along with Senator Bob Corker, who was also considered by Trump for the vice presidential nomination — introduced legislation in 2010 to remove the Fed’s full-employment mandate and have the central bank focus on inflation alone.

In addition, here is the summary at Real Clear Politics of the views of David Malpass, a Trump adviser who is rumored to be a candidate for Treasury Secretary. The article titles gives us a pretty good idea of his views, which also puts him in with the Austrian school and the “audit the Fed” crowd. 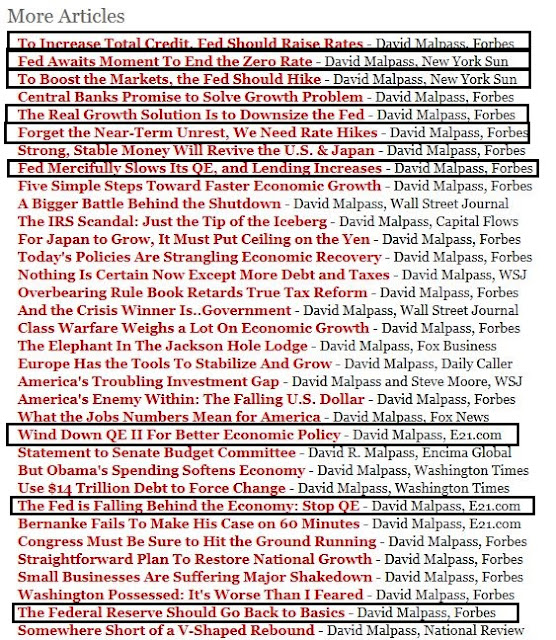 On the other hand, candidate Trump told Fortune back in April that he prefers low interest rates. Donald Trump the property developer has never shied away from debt and therefore low rates are a welcome relief to anyone with a highly leveraged balance sheet,

“The best thing we have going for us is that interest rates are so low,” says Trump, comparing the U.S. to a homeowner refinancing their mortgage. “There are lots of good things that could be done that aren’t being done, amazingly.”

Which road will Trump take?

Here is where the rubber meets the road. Already, unemployment is at 4.9%, which is at or below the natural rate when inflationary pressure appear. Vice-chair Stanley Fischer stated in a speech last week that the Fed is ready to start a rate normalization cycle:

In my view, the Fed appears reasonably close to achieving both the inflation and employment components of its mandate. Accordingly, the case for removing accommodation gradually is quite strong, keeping in mind that the future is uncertain and that monetary policy is not on a preset course.

Does President Trump really want what candidate Trump wanted, namely higher interest rates to choke off growth even as his fiscal stimulus program goes into effect? Barron’s reported that Jeff Gundlach expects 10-year yields to rise to 6% within 4-5 years:

Now that the New York businessman has shocked much of the world by vanquishing rival Hillary Clinton, Gundlach sees something else unstoppable: a rise in bond yields that could lift the yield on the 10-year Treasury note to 6% in the next four or five years.

Trump’s pro-business agenda is inherently “unfriendly” to bonds, Gundlach says, as it could to lead to stronger economic growth and renewed inflation. Gundlach expects President-elect Trump to “amp up the deficit” to pay for infrastructure projects and other programs. That could produce an inflation rate of 3% and nominal growth of 4% to 6% in gross domestic product. “If nominal GDP pushes toward 4%, 5%, or even 6%, there is no way you are going to get bond yields to stay below 2%,” he says.

The yield on the benchmark 10-year Treasury bond rose 0.27 percentage point in the two trading days following the election, to end the week at 2.15%.

A 6% yield would tank the stock market, and Trump’s 4% real growth target. Instead, would he prefer an Arthur Burns Fed, which largely acquiesced to Nixon’s fiscal policies and started a round of rising inflationary expectations? Or is he likely to stay with his advisers’ Austrian roots and want a Paul Volcker Fed, which was willing to raise rates so hard and cause a recession in order to beat inflationary expectations into submission?

President Trump will have enormous power to shape Federal Reserve policy, starting in 2017. There are two vacancies on the Fed’s board of governors. Janet Yellen’s term will be up in February, 2018. The two key things to watch are:

The Austrian crowd would prefer a Fed that is run on a preset anti-inflation course. Forget about its full employment mandate. Jettison its regulatory duties. If Trump were to lean that way, John Taylor would be an ideal candidate to be named as governor, with the expectation that he replaces Yellen as Fed chair.

On the other hand, a more pragmatic Trump might prefer a more dovish Fed. In that case, Yellen might be invited to stay, Both Bernanke and Yellen have been the most dovish Fed chairs in recent memory. Ben Bernanke started the trend of dovish Fed chairs. Bernanke’s doctoral thesis focused on the monetary policy errors during the Great Depression. He used those lessons during the Great Financial Crisis to unleash a series of quantitative easing programs hated by Austrian economists. Janet Yellen is a labor economist by training. During her tenure, she has focused on the slack in the labor market as justification for maintaining an easier than expected monetary policy. In fact, she has been fighting a rearguard action against the regional Fed presidents, who have largely come out in favor of hiking rates.

If Trump is seeking someone even more dovish, he might consider current Fed governor Lael Brainard, who has resisted the call of rate normalization because she considers the global financial system is too fragile to withstand significant rate increases. He might also consider Richard Koo, the Taiwanese-American who is the chief economist at Nomura. Koo’s policy prescription of “get the government to spend until it hurts, and then spend some more, while the central bank supports fiscal expansion” might be exact what Trump is looking for.

Donald Trump will have an important choice on his hand. He can take the Austrian road, which will risks the growth upside of his signature fiscal policy of Making America Great Again. In the alternative, he can take the easier path of shaping a more dovish Fed. The risk is an inflationary blow-off in the 2019 or 2020, and the Fed is forced to respond with a series of staccato rate hikes that plunges the economy into recession and imperils his chances for a second term.

How he chooses will have enormous implications for the path of equity prices. Do we get a market blow-off in 2017, followed by a cyclical bear in 2018, or a melt-up into 2019 or 2020, followed by a market crash? In other words, does he want to Make America Great Again immediately, followed by a flame-out, or does he want a second term in office?

Janet Yellen will be testifying on Thursday before the Joint Economic Committee of Congress. Watch for hints of policy direction from Trump proxies. Otherwise, watch the new appointments to the Federal Reserve board.

3 thoughts on “Trump vs. the Fed: War or détente?”