How to trade the US election – Humble Student of the Markets

Mid-week market update: There isn’t much to say about the short-term stock market outlook, other than to acknowledge that a strong reflex rally is underway. As the markets are reacting in a highly emotional way, I have little to add other than to say that the market will be volatile. If you did jump on the buy signal issued on Monday night (see Hitting the Brexit trifecta), you might consider scaling out of your long positions as prices rise, especially as SPX rallies to test the underside of its 50 day moving average. 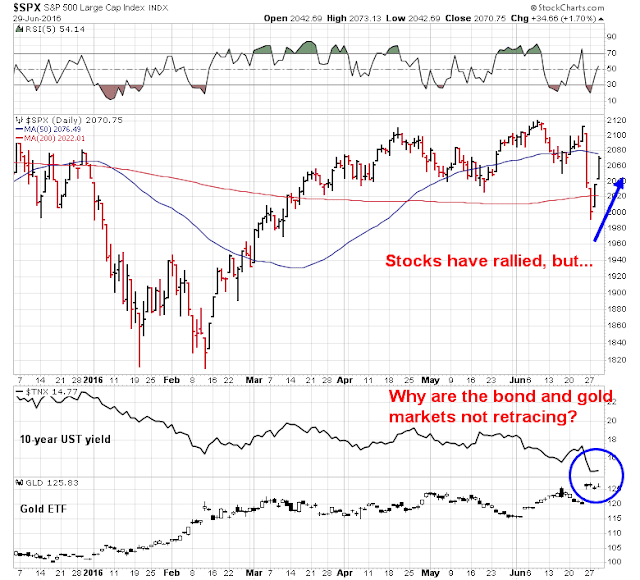 Brian Gilmartin pointed out that both the bond market and gold are not retracing the Brexit panic move the way stock prices are, which is a worrisome sign. I interpret these conditions as a bottoming process, where the market will bounce around in a range and re-test the lows before it can mount a sustainable rally.

Trading the US election

Now that the Brexit has been “fixed”, I turn to ways of trading the US presidential election this year. The last polls show that Hillary Clinton well ahead of Donald Trump and the Iowa Electronic Markets indicates that HRC has about a 70% chance of winning. 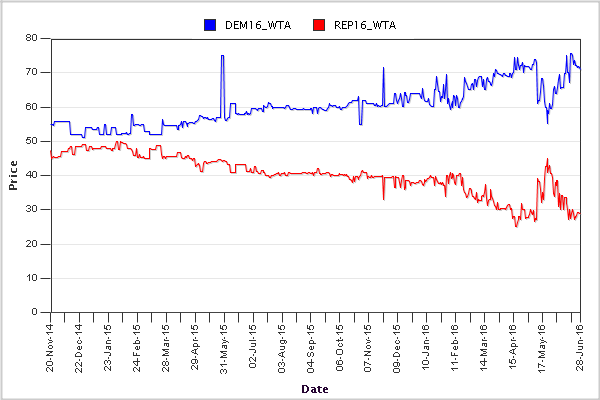 The analysis from FiveThirtyEight show similar levels of probability: 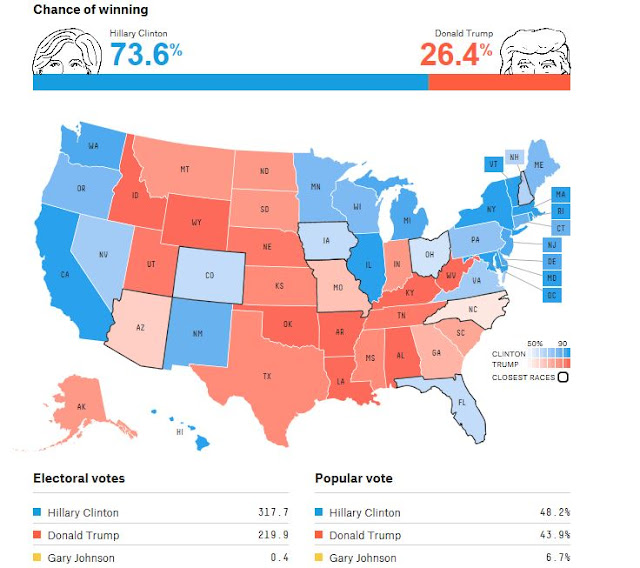 I have a couple of suggested trades to take advantage of either Clinton or Trump winning. As Clinton is currently in the lead, I will frame these trades as a “long” Clinton trade, but if you want to be “long” Trump, then all you have to do is put on the reverse trade by shorting instead of buying.

Hillary Clinton has had a record as Secretary of State and she has shown a tendency to favor a far more assertive foreign policy than either Obama or her husband Bill. Here is The New York Times profile outlining the guide to her underlying foreign policy beliefs:

As Hillary Clinton makes another run for president, it can be tempting to view her hard-edged rhetoric about the world less as deeply felt core principle than as calculated political maneuver. But Clinton’s foreign-policy instincts are bred in the bone — grounded in cold realism about human nature and what one aide calls “a textbook view of American exceptionalism.” It set her apart from her rival-turned-boss, Barack Obama, who avoided military entanglements and tried to reconcile Americans to a world in which the United States was no longer the undisputed hegemon. And it will likely set her apart from the Republican candidate she meets in the general election. For all their bluster about bombing the Islamic State into oblivion, neither Donald J. Trump nor Senator Ted Cruz of Texas has demonstrated anywhere near the appetite for military engagement abroad that Clinton has.

In short, expect Clinton to be far more hawkish, with echoes to past administrations under Reagan, Nixon and Kennedy:

In showing her stripes as a prospective commander in chief, Clinton will no doubt draw heavily upon her State Department experience — filtering the lessons she learned in Libya, Syria and Iraq into the sinewy worldview she has held since childhood. Last fall, in a series of policy speeches, Clinton began limning distinctions with the president on national security. She said the United States should consider sending more special-operations troops to Iraq than Obama had committed, to help the Iraqis and Kurds fight the Islamic State. She came out in favor of a partial no-fly zone over Syria. And she described the threat posed by ISIS to Americans in starker terms than he did. As is often the case with Clinton and Obama, the differences were less about direction than degree. She wasn’t calling for ground troops in the Middle East, any more than he was. Clinton insisted her plan was not a break with his, merely an “intensification and acceleration” of it.

In a speech she made as Secretary of State in 2010, Clinton used the “freedom of navigation” term in reference to the competing claims in the South China Sea, which is code that China is likely to see a far more muscular response from the United States as Beijing uses the artificial island strategy to stake and solidify its claims in the region:

The United States, like every nation, has a national interest in freedom of navigation, open access to Asia’s maritime commons, and respect for international law in the South China Sea. We share these interests not only with ASEAN members or ASEAN Regional Forum participants, but with other maritime nations and the broader international community.

The United States supports a collaborative diplomatic process by all claimants for resolving the various territorial disputes without coercion. We oppose the use or threat of force by any claimant. While the United States does not take sides on the competing territorial disputes over land features in the South China Sea, we believe claimants should pursue their territorial claims and accompanying rights to maritime space in accordance with the UN convention on the law of the sea. Consistent with customary international law, legitimate claims to maritime space in the South China Sea should be derived solely from legitimate claims to land features.

By contrast, Donald Trump shown himself to be far more isolationist as he has called for allies to foot a greater share of the budget for regional defense pacts. In other words, expect a friendly reception towards Pentagon spending from Clinton and don`t expect defense spending to rise very much under Trump.

In light of recent market volatility, using a risk-controlled way of betting on a Clinton win of buying defense stocks while shorting the market might be more advisable. There are two aerospace and defense ETFs, ITA and PPA, each with slightly different weightings, but their relative return patterns are fairly similar. As the charts below show, PPA is testing a relative resistance level while ITA has been a slight laggard and broken down through relative support. 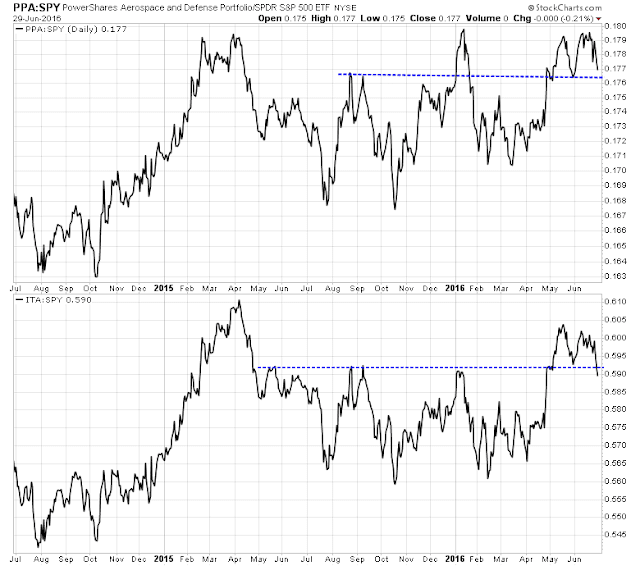 Buy Mexico as the anti-Trump trade

Given Donald Trump’s rhetoric on trade, one way of playing a Trump win would be to short the Mexican Peso, or the Mexican stock market. If you believe that Clinton is more likely to win, do the opposite and buy Mexico instead.

The chart below shows the Mexican peso (MXN), which has been steadily falling against the USD. Unfortunately for investors who don’t have futures trading accounts, there is no MXN ETF as a direct play.

Another way of buying a Clinton win would be to either buy Mexican stocks, or to buy Mexican stocks (MXF) against a short position in the US (SPY). As the chart below shows, MXF has been weak on an absolute basis (top panel) and it has violated a double bottom on a relative basis (bottom panel). 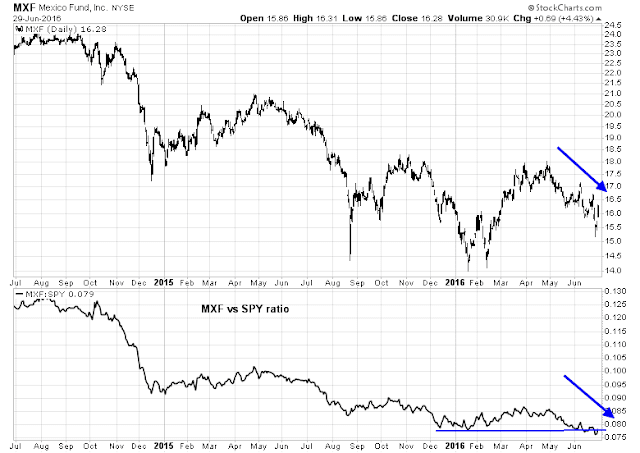 Needless to say, you can also either directly short MXF or short MXF against buying SPY if you want to bet on a Trump win.

6 thoughts on “How to trade the US election”