A shallow pullback? – Humble Student of the Markets

Mid-week technical update: I wrote on the weekend that I expect that the stock market would continue to rise on an intermediate term basis, but some short-term weakness was likely (see A repeat of the failed Oct/Nov rally of 2015?). What I did not expect was to see a short-term buy signal after the brief weakness that we saw today (Wednesday).

In retrospect, it was easy to see that a pullback was coming. This hourly chart of the SPX shows negative divergences on RSI-5 and RSI-14, which set up the conditions for the fall in prices. 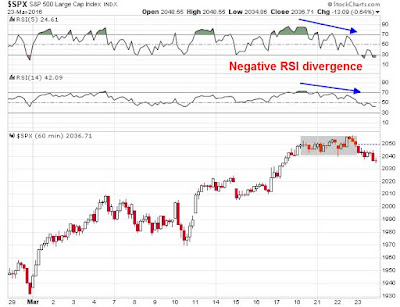 On the other hand, the longer term outlook remained bullish as sentiment indicators were supportive of a move higher. Chris Prybal of Schaeffer`s Research highlighted analysis by his colleague Rocky White that short interest, which is reported monthly, continues to rise. This is a contrarian bullish reading on an intermediate term basis. 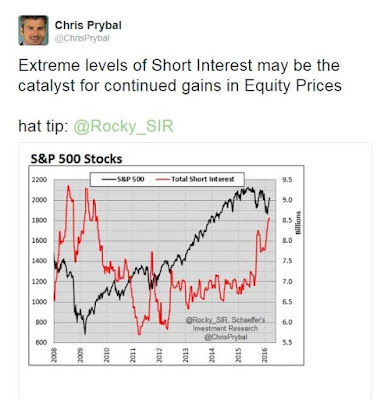 In addition, Brett Steenbarger made a couple of bullish observations. First, he believes that the current rally is not a “bounce in a bear market”:

My cycle measure continues in elevated territory, again unlike much of what we saw in 2015, where strength led to weakness. That continued elevation on a shorter-term cycle measure suggests that a longer-term cycle is at play and that this has been more than a bounce in a bear market.

In addition, he noted that shares outstanding for SPY was falling even as the market rose, which indicates that the traders are skeptical of the rally and therefore the market is climbing a wall of worry:

I also notice that shares outstanding for the SPY ETF have once again dipped, now dropping below their levels from 5, 10, and 20 days ago. Very interestingly, the number of shares outstanding for SPY has dropped over the course of the rally from mid-February. Share redemption has generally been associated with superior returns over a multi-week horizon.

As the market sold off today, what alerted me to a possible bullish signal was the continued negative sentiment prevalent in the market. First of all, TRIN spiked over 2, which can be an indication of panicked selling, which is unusual given the shallowness of the pullback.

Elevated levels of TRIN can be an imperfect buy indicator. The chart below shows past instances when TRIN was above 2. 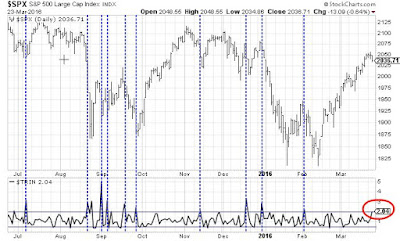 In addition, the ISE equity-only call/put ratio, which measures customer-only opening option transactions, stayed low all day near the 100% level, which is contrarian bullish for a day when prices are weak. 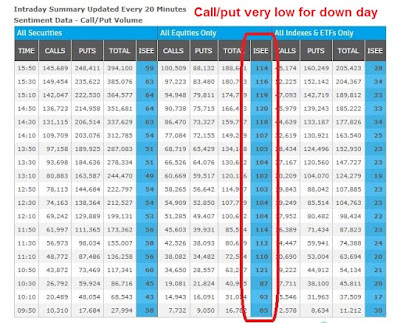 My inner trader isn’t totally convinced that this represents THE BOTTOM on a short-term basis, but he stepped off the sidelines at the market close to buy a small initial long SPX position.

5 thoughts on “A shallow pullback?”