Big Trouble with 5-year China? – Humble Student of the Markets

China’s latest five-year plan seems to be a big hit. What’s more, the most recent growth slowdown is abating, the stock market is recovering, but my indicators are suggesting that, despite all of the glowing rhetoric, the economy is taking a step back in its path towards re-balancing growth towards the household sector.

There was no shortage of accolades for the latest five-year plan. China Daily’s headlines trumpeted Global CEOs reiterate their faith in Chinese economy:

Global CEOs attending the China Development Forum currently underway in Beijing said they have a better sense of policy direction, and are upbeat about the country’s outlook.

“I’m a big fan of what’s going on in China. If you had faith in China’s potential 12 months ago, then that it has hit some bumps on the road, which I believe are all short-term, should not impact your view on the long-term potential of the economy,” said Dennis Nally, chairman of professional services group PricewaterhouseCoopers (PwC) on the sideline of the forum.

The 13th Five-year Plan shows China’s commitment to opening-up, reform and focus on creating comparative advantages. “It’s one that will continue to provide clarity,” he said.

Notwithstanding the propaganda from state controlled media, Gavyn Davies also had cautious praise for the latest five-year plan. First, he laid out the benchmarks by which he measured Beijing`s latest macro strategic initiative:

Macro policy faces a very difficult challenge. It needs to accelerate the rebalancing of the economy without proceeding so rapidly that a hard landing becomes likely. Ideally, such a strategy would have the following ingredients:

He concluded that the latest five-year plan warranted a passing grade:

The good news is that the collection of policy announcements made at the NPC contains many of the elements of this package. For several months, the Premier has emphasised that a key priority for 2016 would be the closure of excess capacity in “zombie” state owned enterprises (SOEs), mainly in basic manufacturing.

In the past, the government has not been willing to bite this bullet. The declines in the output of basic industrial sectors in recent months suggest that they are more serious this time but the speed of this adjustment is limited by two factors.

The first is the over-riding need to protect the level of employment in the economy, which is already proving very difficult in some regions. The second is the need to recapitalise the banking sector as bad loans to the SOEs are increasingly recognised.

Growth seems to be slowing at a highly controlled pace. Davies observed that the Fulcrum nowcast models of Chinese GDP growth show a pattern of decelerating growth, but with a series of mini-cycles of stimulus-slowdown around the growth path. Such readings suggests that the authorities are well in control of the Chinese economy. 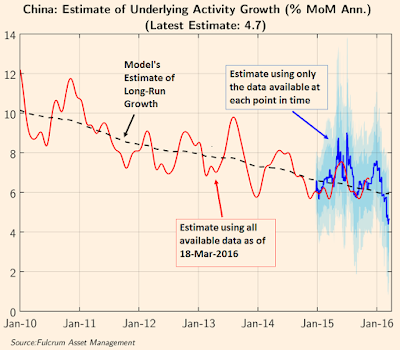 Callum Thomas confirmed that his latest readings show that another round of stimulus is underway to stabilize growth, which makes the prospect of a hard landing unlikely in the immediate future. 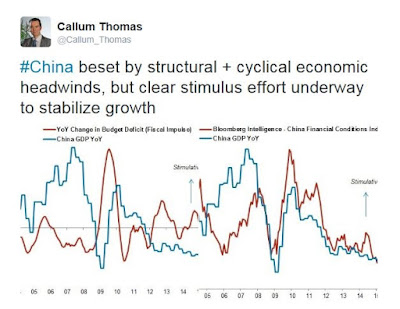 Thomas also pointed that the real estate market, which is a key barometer of the short-term stresses in the economy, is recovering nicely, led by Tier 1 cities. 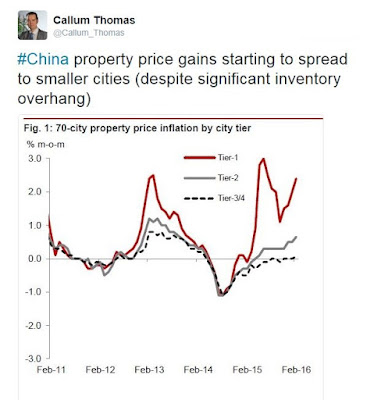 The equity markets have responded accordingly to the good news. Not only has the Shanghai market rallied above its 50 day moving average (dma), the indices of the major Asian trading partners have also regained their 50 dma, with the South Korean and Taiwanese markets above their 200 dma (not shown in chart). 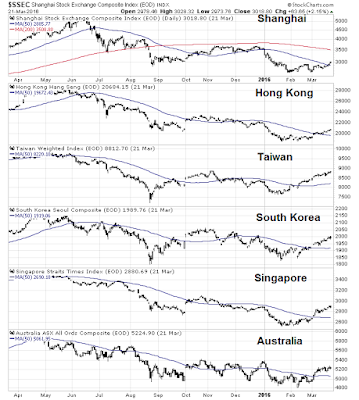 So far, so good. What could possibly go wrong?

Mr. Market begs to differ. The message from the market is one of concern about an unbalanced recovery. Though the results are preliminary, my pair trades of long (consumer) China and short (financial) China are rolling over, indicating that Mr. Market thinks that the outlook for financial China is better than consumer China.

If the Chinese economy were truly rebalancing its source of growth from financial leverage driven spending to household spending, then the “New China” stocks should be beating the finance stocks. The latest “Old China” revival is a cause for concern and something to keep an eye on.

This will not end well

If this was Zero Hedge, I would be warning of a pending disaster. More realistically, what we have is a “this will not end well” story, with no immediate trigger for a downturn. Nevertheless, the last thing China needs is more financial leverage driven unbalanced growth.

Recently, Nobel laureate Robert Engle expressed concerns about the degree of financial leverage in China. Engle had developed a measure call SRISK as a way of measuring systemic financial risk, which he believed to be superior to VaR, which is a metric with a very short time horizon:

Where SRISK has been steadily increasing since the global financial crisis turns out to be in China and Japan. “China had no SRISK in 2008 and it’s increased pretty much linearly since then,” Engle said. “The country with the largest SRISK in the world right now is China and Japan is the second. So these two giant Asian economies both have banking sectors that look like they are undercapitalized by our measures.”

The first question one faces when studying SRISK in China is whether this type of model works there. Engle thinks it does. In the Western economies, banks that are deemed too big to fail have to be bailed out by the government in a crisis since they would be unable to raise capital in the stock market. “China is very much like the Western countries [in this regard] as there is no possibility that a Chinese state-owned bank is going to fail,” Engle said.

When Engle started tracking SRISK a few years ago, China ranked fifth on the list. It moved up into the first spot two or three years ago. The stock market euphoria since then brought temporary relief, but SRISK has again increased since the market’s collapse. “Right now, it’s just about back on the trend line for what it was before the stock market took off,” Engle said.

So why is SRISK so high in China? Engle pointed to the banks’ lending to state-owned enterprises and municipal governments. As many of these loans are in fact non-performing, they drag down bank stocks’ valuation.

Asked about the future, Engle remained cautious. “I don’t see smooth sailing for the Chinese economy. I don’t think there is so much risk in the banking system, although that’s not necessarily true of the shadow banking system. There is a chance [some wealth management products offering much higher returns] will fail over the not-too-distant future. We are [also] going to see some corporate defaults.” His advice for investors? “Treat credit risk as an important part of your investment [decision-making process].”

Even with unbalanced growth, there is no immediate threat to global financial stability. However, it does suggest that piling on financial leverage will only exacerbate the downside volatility in the next global downturn.

Stay tuned and keep your flak jacket nearby.