A post-FOMC market blastoff, but in which direction? – Humble Student of the Markets

Mid-week update: I thought that I would write my mid-week update a day early, because of the binary outcome of the FOMC meeting. This meeting could turn out to be a critical turning point for the short and medium term tone of the markets.

It`s becoming fairly clear that the Fed is unlikely to raise rates at its March meeting. Marketwatch highlighted analysis from BoAML indicating that the Yellen Fed has not historically surprised the market with rate hikes.

On Friday, a team of currency and interest-rate strategists at Bank of America Merill Lynch suggested that it might be time for a new approach.

After studying Fed-funds futures data, the strategists discerned that the Fed has typically provided investors with plenty of warning before raising rates.

As the following chart shows, the Fed hasn’t raised interest rates unless the market assigned it at least a 60% probability of doing so. This seems to contradict the Fed’s desire that every meeting be viewed by investors as potentially “live,” meaning the central bank could make a rate move at any one of its confabs. 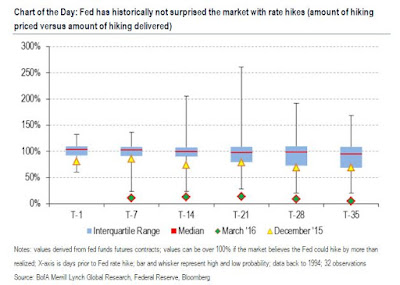 If the Fed were to raise rates either at its April or June meeting, now is the time to start telegraphing that move. Here is what`s at stake as we await the FOMC announcement.

The stock market has been rallying for the last few weeks, leaving it with extended, overbought and vulnerable to a negative surprise. Trade Followers observed on the weekend that Twitter strength for every sector was positive – and such conditions are usually followed by pullbacks. 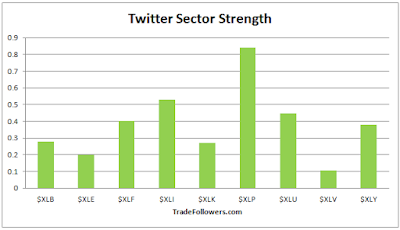 This chart from Bespoke shows how extended the market internals are: 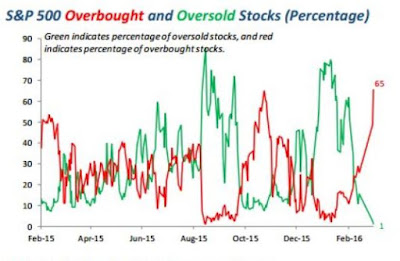 This chart from IndexIndicators presents a two-sided technical view. Either the market is nearing breadth support, where it has bottomed in the recent past, or it is just about to break support and start a more significant pullback. 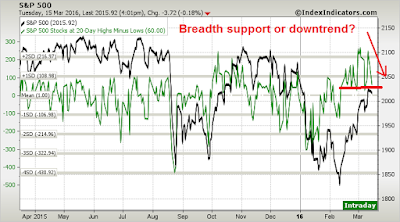 A hawkish statement from the FOMC would have the effect of raising bond yields and causing the greenback to rally. Marketwatch reports that David Kostin of Goldman Sachs estimates that a 10% move in the Trade Weighted Dollar would amount to roughly $3 of SPX EPS growth. Thus, the tone of the FOMC statement could either boost or depress stock prices. The greatest sensitivity would be in Technology, Materials, Energy and Industrial stocks, which are the late-cycle sectors that are emerging as the market leaders today (see All aboard the reflation train, but beware of derailments). 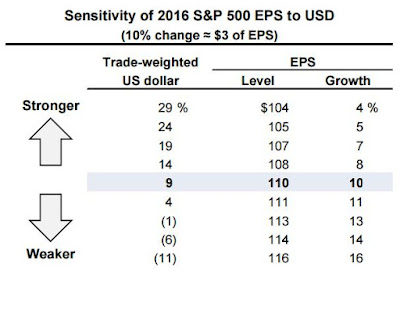 As the USD is negatively correlated with commodity prices, a strengthening dollar is likely to stop the commodity rally in its tracks. The chart of gold stocks below shows how vulnerable the commodity complex is to a hawkish Fed. The % bullish indicator (bottom panel) is already very extended and overbought. Moreover, the silver/gold ratio is exhibiting a worrisome negative divergence, as the higher precious metal (poor man’s gold) silver is underperforming gold even as gold stocks rally. 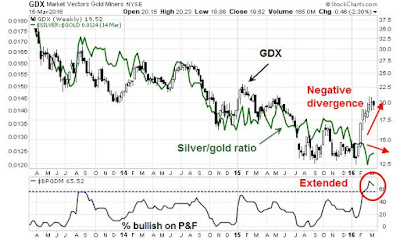 I could go on about how overbought and vulnerable the stock market is, but you get the idea.

On the other hand, there is no law that says overbought market have to fall. Overbought markets can get more overbought as the kind of breadth thrusts that we have experienced can lead to a series of “good” overbought conditions. Todd Salamone of Schaeffer’s Research indicated that he is seeing some parallels with the SPY advance seen last October. The market rallied, consolidated sideways, and then strengthened further. 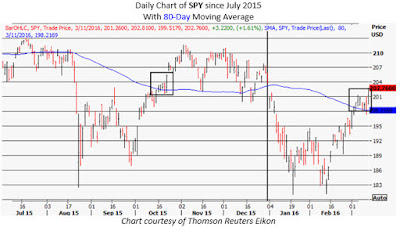 Moreover, Salamone observed that the current rally has been accompanied but skepticism, which is bullish:

As we discussed above, and despite the SPY and SPX rallying by slightly more than 10% in only a one-month time frame, we think the rally from the February lows still has strong potential to continue in the weeks ahead. Remarkably, per an observation I made on Twitter last week, short interest on SPX components actually increased in the mid-February to early March reporting period, even as the index advanced 6% in that time frame. A sharp advance like this would normally suggest short covering, leaving the market vulnerable to downside after the shorts have covered and technical resistance comes into play.

The skepticism can also be found in the latest Ticker Sense blogger sentiment poll, which shows an equal number of bulls and bears. 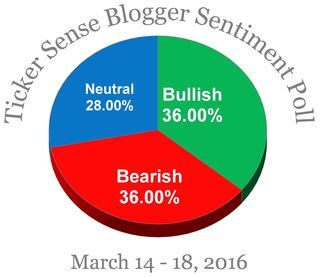 For what it’s worth, Jeff Hirsch at Trader’s Alamanac pointed out options expire this week (OpEx). March OpEx weeks have shown a bullish bias in the past. 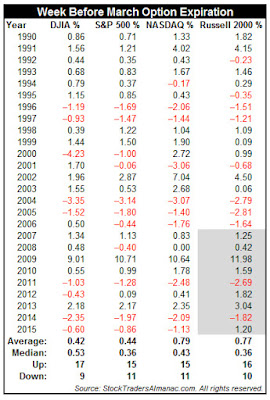 The stakes are high

In conclusion, the stakes are high as we await the FOMC decision and statement. I have no idea of how the tone of the statement might sound like. A dovish statement has the potential to push the SPX to test its former highs, while a hawkish statement would cause an extended market to pull back.

4 thoughts on “A post-FOMC market blastoff, but in which direction?”