A “good” overbought market? – Humble Student of the Markets

Mid-week trading update: Last weekend, I pointed to the analysis by Simon Maierhofer, writing in Marketwatch, who highlighted a bullish “kickoff” signal in which the SPX rose for 1.5% or more for three consecutive days (see The market 2-step: 1 forward, 1 back). Such “kickoff” signals have seen higher stock prices 12 months later. So far, the market is roughly acting according to that script. 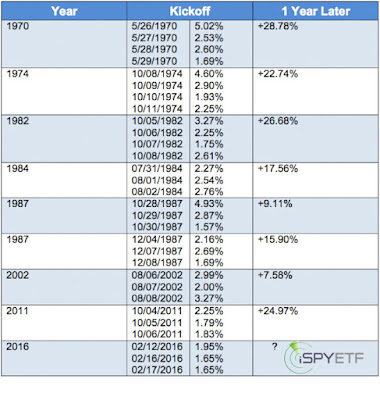 Two weeks after that “kickoff” signal, the market is overbought, which should be a cautionary sign for traders. However, such overbought conditions may be the start of a series of “good” overbought signals that accompany bullish thrusts. As the SPX approaches key resistance at about the 2000 level, the key test for the bulls is how stocks behave at these levels.

As the chart below of the SPX indicates, the market is overbought on the 5-day RSI. Moreover, TRIN closed at 0.41, which is another sign of an overbought reading. The vertical lines indicate instances in the past year when TRIN has fallen below 0.5. History shows that stock prices have either pulled back or moved sideways for 2-3 days. 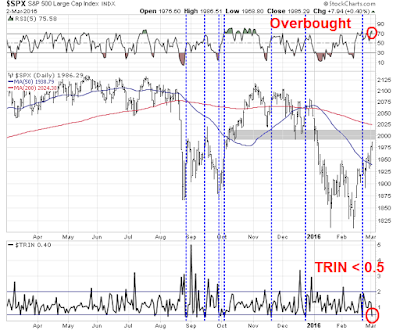 This chart from IndexIndicators also shows that short-term breadth appears to be extended: 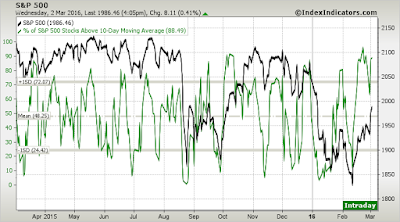 Further, Urban Carmel wrote about the overbought condition shown by the NYSE McClellan Oscillator, which closed above 90 yesterday. 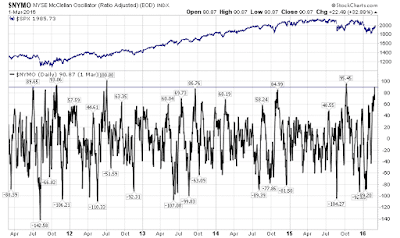 His conclusion was similar to mine. Momentum is positive, but prepare for short-term weakness:

SPY should be weak the next day or longer. If it instead rises further, it will likely give those gains back in the next week or so. It would be normal for SPY to trade at least 1% below today’s close in the days ahead. A loss of 3% or more would not be unusual.

The upward momentum – both price and breadth – in SPY implies a “higher high” within the current rebound is likely still ahead.

Stocks are likely to either pull back or consolidate their gains in the next couple of days. My inner trader covered his small SPX short position today. He is in cash and waiting for a suitable pullback in order to get long.

14 thoughts on “A “good” overbought market?”