Bottomed, but wait for a re-test of the lows – Humble Student of the Markets 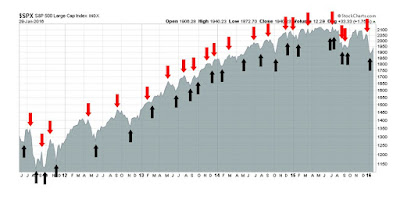 Update schedule: I generally update model readings on my blog on weekends and tweet any changes during the week at @humblestudent.

Whew! Q4 GDP came in at 0.7%, which was below expectations of 0.8%, but growth was still positive and well above some of the Apocalyptic calls for a negative print. This week, we saw further confirmation that macro tail-risk is limited. The US economy is not headed for a recession and the downside risk from China has also been contained.

Nevertheless, the stock market remains jittery and will likely remain so for a little longer. The main source of anxiety is coming from the earnings outlook. The interim report for Q4 Earning Season is out and it got a bare passing grade. With 40% of the SPX having reported, the latest update from John Butters of Factset shows that the EPS beat rate coming in at above average, but sales beat rate below average and, most importantly, forward 12-month EPS continuing to slide (annotations in chart below are mine). 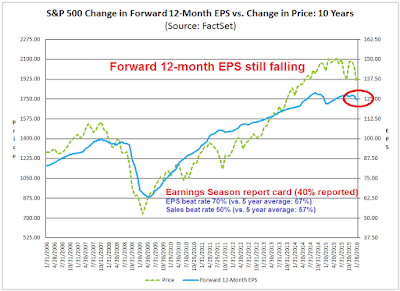 No recession on the horizon

Until forward EPS starts to turn up, stock prices are likely to remain range-bound and trade in a sloppy fashion. From a macro perspective, the greatest anxiety comes from the weakness in industrial production and ISM Manufacturing, as exemplified by the disappointing capital goods order release last week.

However, I would point out that the share of the industrial sector of the economy has been in secular decline, so the importance of its weakness is diminished. 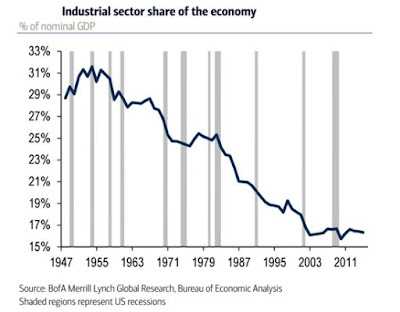 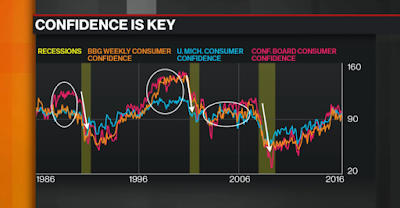 Tim Duy noted that even within the so-called “weak” industrial sector, the weakness isn’t very broad based. He pointed to work by Josh Lehner indicating that the decline in industrial activity is not well dispersed across the sector: 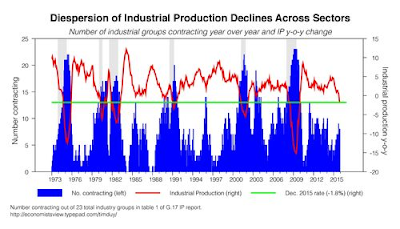 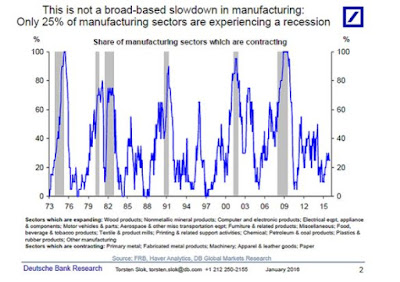 Most of the weakness observed in industrial production, as well as forward EPS, has been related to the resource sectors. Analysis from Citi showed that EBIT margins on remains healthy on an ex-energy basis. In short, operating margins are not turning down despite the headwinds posed by a rising USD. 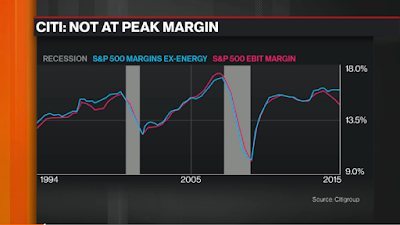 So relax. The US economy is highly unlikely to roll over into recession. The SPX earnings outlook is healthy, especially if you exclude the troubled energy sector.

China: Is this as bad as it gets?

What about the concerns over a China slowdown? Could that drag the US into a recession?

The transmission mechanism of apparent economic weakness in China has been through lower commodity prices, which has also tanked the emerging market (EM) economies.

Ed Yardeni recently explained it this way: EMs borrowed too much USD because of an easy post-GFC Fed and the recent rally in the trade weighted dollar is largely attributable to a short-covering rally by EM borrowers:

The Fed’s easy monetary policies at the beginning of the previous decade certainly contributed to the subprime mortgage mess. This time, the Fed’s easy money in recent years encouraged borrowers in emerging markets (EMs) to borrow lots of money from banks and in the bond markets to expand commodity production. A significant amount of that debt was in dollars. The prospect of the tightening of US monetary policy after so many years of near-zero interest rates caused EM borrowers to scramble to sell their own local currencies to buy dollars to pay off their dollar-denominated debts…

From this perspective, the 23% increase in the trade-weighted dollar since July 1, 2014 is to a large extent a massive short-covering rally by EMs. The soaring dollar increased the local currency prices of commodities priced globally in dollars. It’s likely that the plunge in commodity prices might have been triggered by the short-covering dollar rally combined with the tightening of credit for EMs. Of course, the supply-led glut of commodities only made things worse.

He concluded that contagion risks are limited because of the low level of leverage in the financial system related to EM and commodity-linked debt . In this case, there is no financial contagion.

My relatively optimistic spin has been that the dollar borrowing by EMs has been largely financed in the capital markets, which are better able to absorb shocks and losses than banking systems. Loans to EMs haven’t been sliced and diced into different tranches of credit derivatives as were subprime mortgages.

Of course, there are many high-yield bonds that were priced too cheaply and have seen their yields soar since mid-2014. However, they were never rated as anything other than junk. EMs and junk bonds have been great shorts recently, but I doubt there will be a sequel to “The Big Short” based on them.

In other words, this is as bad as the fallout from China gets. Weak commodity prices and weak EM economies may shake up risk appetite a little, but they’re not bringing down the global economy.

In fact, there are signs that the commodity price downturn is starting to stabilize. The chart below shows industrial commodities (top panel) and oil prices (bottom panel). Notwithstanding the headline grabbing decline in energy prices, industrial commodity prices seem to be putting in a bottom. They have flattened out in the last few months and actually rallied through a downtrend line last week. Equally constructive has been the action in oil, which has strengthened to test a downtrend. 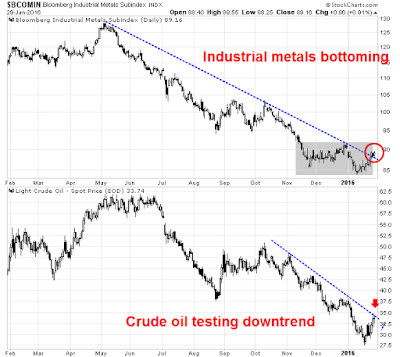 Is the worst over? I don’t know. I will be monitoring these charts carefully. At a minimum, the situation in Commodity-Land is getting less worse. Should we start to see commodity prices bottom and strengthen, then pressures would start to come off the junk bond market. Such a development has the potential spark a surprise rebound in risk appetite.

Waiting for the re-test

With downside risk from a US recession and contagion risk from China contained, my inner investor concludes that the market has bottomed and Mr. Market has in effect running a post-Christmas sale tag on equities. He believes that this represents an excellent time to be accumulating positions in stocks that he likes.

My inner trader, however, isn’t convinced that the market is ready to take off just yet. He is waiting for a re-test of the lows. The technical damage done by the decline is too great and the general level of anxiety is still too high to support a V-shaped market recovery.

From a longer term perspective, the market appears to be undergoing a bottoming process. This chart of Rydex sentiment, which measures what people are doing with their money rather that just expressing their opinions in a poll, is flashing a crowded short reading. If the historical pattern holds, the market should undergo a multi-week sideways and choppy consolidation. This isn’t 2008, where the general public bought the market weakness as stock prices weakened. Downside risk is limited. 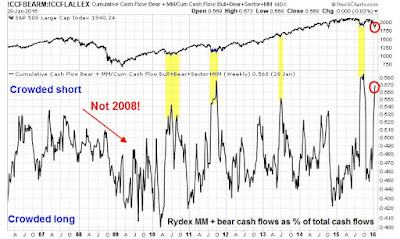 In addition, Barron’s reports that insiders have displayed a continuing pattern of buying. Prolonged bear markets simply do not begin with sentiment readings at these levels. At a minimum, I would be extremely cautious about being short for any period of time except for a quick trade.

On the other hand, this chart from Trade Followers shows significant technical damage from deteriorating Twitter breadth and a crossover of bullish and bearish stock counts. Such damage typically cannot be repaired with a V-shaped bottom. Such conditions tend to resolve themselves with a basing period of sideways consolidation (annotations are mine). 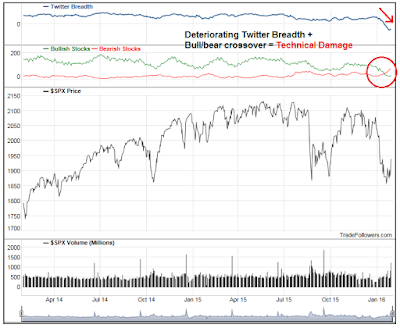 These breadth charts from IndexIndicators show that the market is overbought and vulnerable to a pullback (annotations in red are mine). 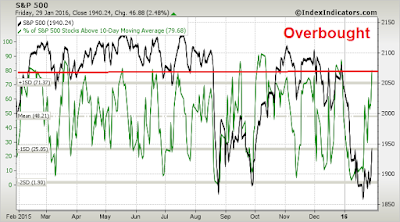 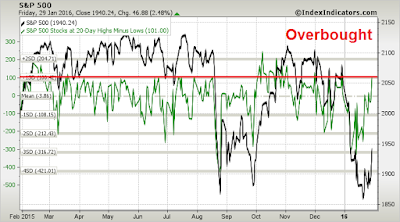 To be sure, there is still a remote possibility that the market is about to experience a Zweig Breadth Thrust (for a full explanation of the ZBT see Bingo! We have a buy signal!). While I am watching this carefully and we have another four days for the signal to be triggered, I’m not holding my breadth for that outcome. (For readers who want to follow along at home, use this stockcharts link for a real-time update). 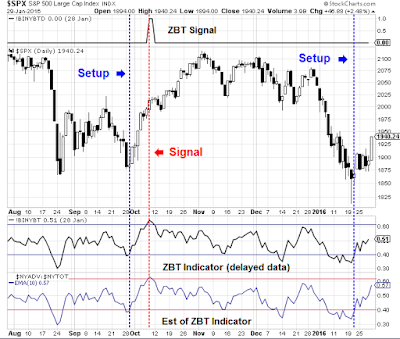 I wrote last week that I had been expecting a short-term market rally and that I would be carefully watching the quality of the rebound. The jury is out as to whether this is a V or W shaped rally, but the weight of the evidence calls for a basing period after such a sharp drop. My inner trader began to scale out of his long positions on Friday. He remains open to the possibility that a V-shaped bottom has occurred, but he is maintaining tight stops on the remainder of his long positions. His preferred scenario calls for a re-test of the recent lows, with a possible violation of those lows as a way of flushing out any remaining bulls to form a capitulation bottom.

My inner investor, by contrast, is convinced that a bottoming process is occurring based on the constructive macro backdrop. He is long equities in anticipation for higher prices later this year, with an overweight position in the resource sector.

12 thoughts on “Bottomed, but wait for a re-test of the lows”