Is Warren Buffett losing his touch? – Humble Student of the Markets

How would you evaluate a manager with this kind of 10-year investment performance? Terrific? Or Meh!

It depends on when you got in. Sure, the 10 year numbers look terrific, but he is roughly flat with the benchmark over five years and he had a difficult 2015.

What if I told you this track record was none other than the legendary Warren Buffett? The chart represents the relative performance of Berkshire Hathaway B (BRKb) against the market. It’s how ordinary mortals like you and me participate with Buffett in his management of BRK.

The Buffett track record in context

The five year track record looks positively ordinary. What happened to Buffett the investment giant? The Oracle of Omaha?

This longer term chart puts the relative performance of BRKb into context. BRKb has had an excellent long term track record, though the shorter term five-year record can best be described as so-so (top panel). As Buffett is well known to be a value investor, his struggles reflect the difficulties that value investing has experienced (bottom panel). In fact, BRKb has actually performed quite well against other value managers, as measured by the Russell 1000 Value Index, over the last five years (middle panel). 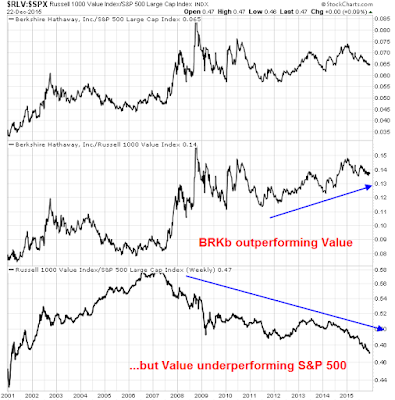 How patient are you?

The struggles of Buffett and others bet the question of whether the value style is dead. No, you just have to be patient and recognize that the market goes through value and growth or momentum cycles where each style dominates returns. Consider this Cliff Asness discussion about his experience with value investing. At first, value factors backtested very well (via Alpha Architect). 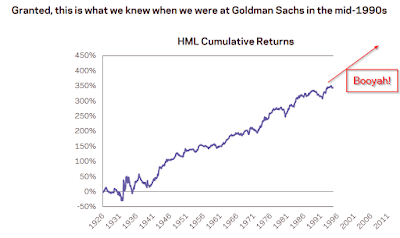 Asness was unfortunate enough to implement the strategy just as the Tech Bubble was getting started: 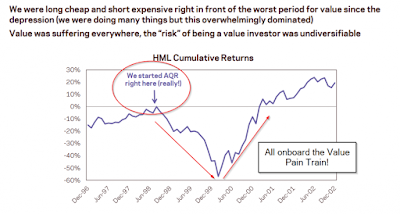 The truth of the matter is, the value style has been facing severe headwinds for over five years, which is beyond the time horizon of many investors and fiduciaries. This chart from Morgan Stanley tells the story. The underperformance of global value stocks is as severe as it was at the height of the NASDAQ Bubble in 2000. 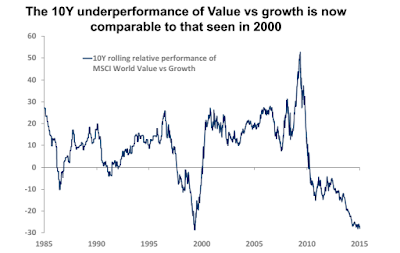 With the style so out of favor, value appears to be poised for a rebound. Indeed, The Telegraph reported that a UK based fund using Buffett like principles returned 25% this year.

The moral of this story is, there is a big difference between the kind of time horizon favored by traders and investors. Traders would not tolerate the kind of relative drawdowns experienced by Buffett in the last year. Even a legend like the Oracle of Omaha is not perfect. Jeff Matthews recently criticized Berkshire for two bad acquisitions, namely the purchase of Precision Castparts for 20 times what may (or may not) be peak earnings and Hudson City Bancorp.

Not everyone is good at everything. For the last word, consider Mark Hulbert’s tribute to the late Richard Russell. Hulbert detailed how Russell had been correctly bearish in the early 1970’s and then called the turn at the bottom of the bear market in 1974. Russell went on to presciently turn bearish in August 1987, two months before the Crash. Admittedly, he wasn’t the best at trading calls:

In contrast to catching these and other momentous changes of major trends, Russell’s timing advice for the market’s shorter-term trends was less impressive. This was especially the case over the past decade, when his daily blog sometimes descended into what struck some subscribers as a stream of consciousness and, on occasion, contradicted itself from day to day.

But advisers who are good at catching changes in the market’s major trend rarely excel at short-term market timing, and vice versa. And though neither pursuit is easy, the former — Russell’s specialty — is far rarer. According to the Hulbert Financial Digest, Russell’s market-timing advice in the 1980s and 1990s was at or tied for the best performer among all monitored market timers.

Russell’s enduring legacy may therefore be that catching even some of the market’s major trend changes can make up for many missteps involving the shorter-term trend. And to catch those major trend changes, you must be willing to go against strongly and widely held opinions.

The secret of investment success is to know your own core competencies, sticking to your guns and learning to be patient.

5 thoughts on “Is Warren Buffett losing his touch?”