There appears to be some glitch with the formatting of the previous post. Here it is again:

In a recent post, I was relatively upbeat about the near term market outlook but warned that the next recession could be very ugly (see A major bear market in 2016?). To explain, I have found three possible time bombs that are set to go off at the next recession:

Let me preface my comments by saying that I am not predicting an imminent disaster. Each of the risks that I outline are just that – risks. None of them are necessarily destined to blow up in our faces, but if any of them do, they will exacerbate the magnitude of the next downturn.

With those caveats in mind, let me go through each of the risks.

The first source of financial vulnerability was identified by David Merkel, an actuary turned professional investor. He pointed out that the Fed has a mismatched balance sheet:

The pristine balance sheet of 2008 was very short in its interest rate sensitivity for its assets – maybe 3 years average at most. Now maybe the average maturity is 12? I think it is longer…

Does anybody remember when I wrote a series of very unpopular pieces back in 2008 defending mark-to-market accounting? Those made me very unpopular inside Finacorp, the now-defunct firm I worked for back then.

I see three hands raised. My, how time flies. For the three of you, do you remember what the toxic balance sheet combination is? The one lady is raising her hand. The lady has it right – illiquid assets and liquid liabilities!

In a minor way, that is the Fed now. Their liabilities will reprice little as they raise rates, while the market value of their assets will fall harder if the yield curve moves in a parallel shift. No guarantee of a parallel shift, though – and I think the long end may not budge, as in 2004-7. Either way, though, the income of the Fed will decline rapidly, and any adjustment to their balance sheet will prove difficult to achieve.

The Federal Reserve is not just any bank, it’s a central bank. Therefore a mismatched balance sheet, e.g. borrowing short and lending long, won’t hurt the Fed in the same way as it does other financial institutions because central banks cannot go bankrupt. Nevertheless, Merkel pointed that any fallout doesn’t just magically go away:

As a result of the no-mark-to-market accounting, the Fed won’t show deterioration of its balance sheet in any conventional way. But you could see seigniorage – the excess interest paid to the US Treasury – go negative, and the dividend to its owner banks suspended/delayed for a time if rates rose enough. Asking the banks to buy more stock in the Federal Reserve would also be a possibility if things get bad enough – i.e., where the future cash flows from the assets could never pay all of the liabilities. (Yes, they could print money together with the Treasury, but that has issues of its own. Everything the Fed has done with credit so far has been sterile. No helicopter drop of money yet.)

Of course, if interest rates rose that much, the US Treasury’s future deficits would balloon, and there would be a lot of political pressure to keep interest rates low if possible. Remember, central banks are political creatures, much as their independence is advertised.

Merkel concluded that there is a clear and present danger, especially now that the Fed has begun to normalize rates:

Ugh. The conclusions of my last two pieces were nuanced. This one is not. My main point is this: Even with the great powers that a central bank has, the next tightening cycle has ample reason for large negative surprises, leading to a premature end of the tightening cycle, and more muddling thereafter, or possibly, some scenario that the Treasury and Fed can’t control. 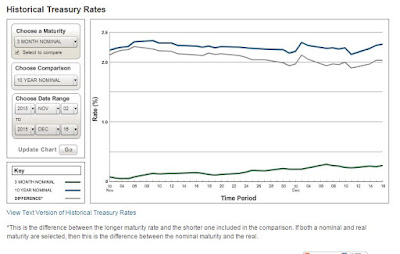 I am indebted to Michael Pettis for pointing out this second source of global systemic vulnerability. Here is what we know about China:

I have written before about ways to monitor the progress of the economic rebalancing theme in real-time by watching a couple of pairs trades (see Two better ways to play Chinese growth). So far, the New China consumer sensitive ETFs are handily beating the Old China finance heavy ETFs.

The question that Pettis tried to answer is, “Is China rebalancing fast enough?”Even under relatively optimistic assumptions, China does not have sufficient time to rebalance its economy before running into serious trouble on its debt:

In order to answer the question of how much time China has I thought it would be useful to work out a simple model for the growth in debt to see how plausible it is to assume that China has another 10-15 years in which to manage the adjustment without implementing far more dramatic transfers of resources, either to pay down debt or to raise household wealth. The model shows pretty clearly that China does not have that much time unless we make extremely implausible assumptions about the country’s debt capacity and, just as importantly, about market perceptions about this debt capacity.

The model shows that even making fairly optimistic assumptions and accepting the lower end of debt estimates, debt cannot stabilize unless growth slows very sharply. If growth does slow sharply enough—to an average of 3% over the next five years – and if at the same time the financial sector is reformed so rapidly that within five years China’s economy is able to grow with no increase in debt (so that China actually begins to deleverage), debt can remain within a 200-220% of GDP range.

Most Chinese debt is RMB denominated debt, so as long as the PBoC can print more RMB, a China slowdown is unlikely to trigger a global financial crisis. However, someone still has to pay for any debt writedown. In the past, the government has socialized the losses. So that means that it is ultimately the household sector would pay the price. In that case, you can kiss the idea of further rebalancing goodbye.

I would emphasize the point that this dire scenario is unlikely to happen today as Chinese and global growth remain robust (see A major bear market in 2016?). But when the next recession arrives, watch out!

The story behind the third source of vulnerability is a little complicated. It begins with a mystery and ends with some possibly chilling implications for the global financial system:

Izabella Kamanska at FT Alphaville outlined the mystery this way. The assets and liabilities in the global financial system aren’t adding up:

You can read the article for yourself, but I won`t bore you with all the twists and turns of the mystery. One explanation is much of the missing $6.1 trillion in extra liabilities is attributable to the value added by the global financial system in the form of “financial rent”:

As noted earlier, financial rent began to be featured as a value-add component in GDP in the 1960s, according to Mazzucato. Even so, the methodology behind this inclusion — which focuses on the net interest margin — has always been strongly challenged. Some have argued, for example, that because the interest margin includes a risk premium, a large amount of what’s being counted as value add might very well be being over-estimated. The counter argument, of course, is that the core value-add service banks provide is screening for investor risk and hunting out information advantages.

This brings up the point that there are all these offsetting assets and liabilities floating around the global financial system in the form of “financial rent”. No doubt, a substantial portion are offshore assets. So what happens when the global economy turns sour and someone has to take losses?

Once everything is squared up, after all, that’s tantamount to a significant number of non-asset-backed liabilities in the system, funded as it were by yet-to-be created future value rather than existing capital — a factor exaggerated by rising interest rates and the capacity of offshore centres to obscure unfunded liability creation.

So what happens when “yet-to-be created future value rather than existing capital” evaporates in a downturn? Now you know what I mean when this is an accident waiting to happen.

Don’t run for the hills (yet)

Despite the dire nature of the scenarios that I have outlined, I would to underline the point that this post is most emphatically not a bearish call to run for the hills. Warren Buffett famously said that when the tide goes out, you can see who is swimming naked. The vulnerabilities that I outlined just identifies who could be swimming naked, but silent on the timing of the tide table.

However, when the tide does go out (and it will eventually), those naked swimmers are going to scare a lot people.