I received a couple of comments to my last weekend post that it was somewhat lacking in a short-term trading outlook (see 2016: Time to get bearish and go “Zero Hedge”?). As my previous view that the US equity market would grind up until year-end hasn’t worked out, it would be appropriate to update the short-term stock market conditions.

Still bullish for December
I remain constructive on stock prices for the remainder of the year based on the following analytical framework. Firstly, the latest update from John Butters of Factset shows that forward EPS estimate revisions were flat on the week, which is constructive in the context of the positive seasonality described below. 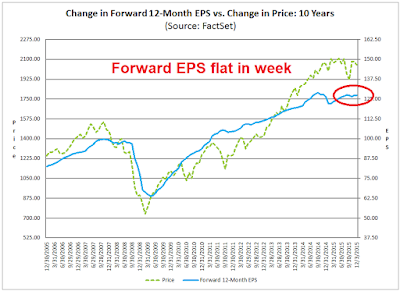 From a seasonal viewpoint, Ryan Detrick showed that December returns tend to have an upward bias and not to get overly worried about mid-month drawdowns: 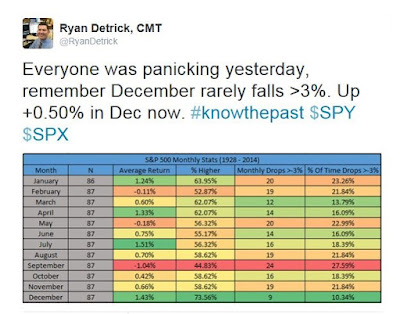 As well, Detrick also showed that the typical December pattern shows a mid-month dip with a bottom around the 15th, so there is no need to freak out about a minor pullback. 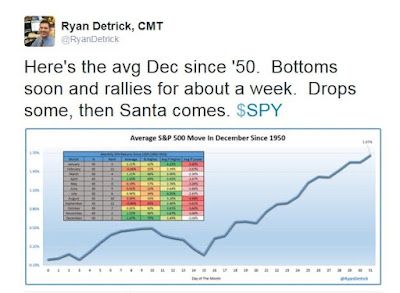 Given the likely big news coming out of the FOMC meeting next week, I would not be overly surprised if stock prices remained choppy for the next few days. Extreme market weakness should therefore be viewed as a gift from the market gods.

Not oversold enough
Tactically, however, the current bout of weakness may not have fully run its course as the market hasn’t reached the kinds of oversold conditions typically seen at short-term bottoms. The SPX chart below shows that RSI5 hasn’t yet flashed oversold readings (top panel); nor has the VIX Index reached the top of its Bollinger Band (bottom panel). In addition, the SPX remains right in the middle of its own Bollinger Band, indicating a short-term neutral condition with negative price momentum. 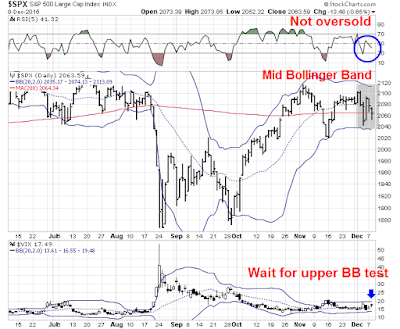 Other indicators, such as the Fear and Greed Index, are showing similar signals of weak price momentum, but not extreme oversold readings. 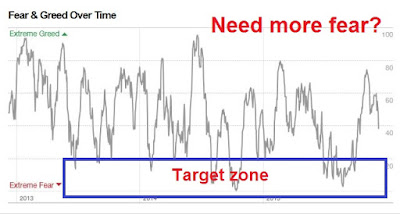 My brief survey of breadth indicators from IndexIndicators is also telling the same story. This chart of the % of stocks in the SPX above its 10 dma is weak, but not oversold (red dot indicates my estimate at the end of day Tuesday). 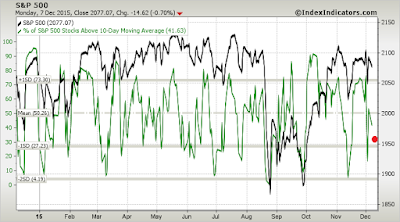 The % of stocks with RSI5 less than 30 has spiked but could go a little higher before reaching an extreme reading. Should this indicator move higher, I would interpret that as a short-term buy signal. 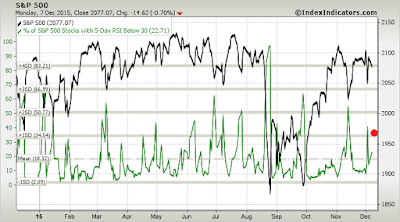 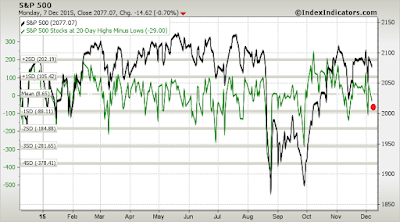 I could go on, but you get the idea. The stock market is weakening, but it is not at an oversold extreme yet.

Positioning for a seasonal rally
Based on the Ryan Detrick`s analysis and supporting evidence from Factset about the EPS outlook, I am still anticipating a decent year-end rally to test or possibly exceed the all-time SPX highs before year-end. I have pointed out before that small cap stocks tend to outperform in December (see Waiting for Santa Claus) and this year is unlikely to be an exception. The chart below of the small to large cap ratio shows that small caps are testing a relative support zone and oversold, which represents a decent entry point once the stock market flashes oversold readings. 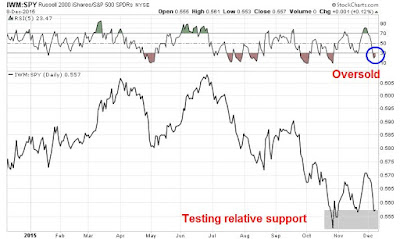 As the markets are likely to get buffeted by anticipation of Federal Reserve action next week, stock prices will probably be sloppy and range-bound for the next few days. My inner investor remains long stocks in anticipation of a year-end rally. My inner trader got stopped out of his energy long positions on Monday and nibbled at some gold equities on Tuesday. He is very lightly committed but he won`t be buying stocks until he sees the whites of their (oversold) eyes.

7 thoughts on “Waiting for the whites of their (oversold) eyes”