What’s wrong with South Africa? – Humble Student of the Markets

The study of emerging markets is a useful exercise in examining our assumptions about economies and markets because they sometimes operate by different rules than developed economies. As an example, Bloomberg reported today that the markets are freaking out over the firing of the finance minister:

South African markets were thrown into turmoil after President Jacob Zuma fired the finance minister, strengthening his grip on power amid differences over government spending.

The rand weakened for a sixth day in the longest streak of losses since November 2013 and bond prices dropped the most on record, pushing yields to their highest levels since July 2008. The country’s bank stocks tumbled the most in more than 14 years following the dismissal late on Wednesday of Finance Minister Nhlanhla Nene. The cost of insuring South African debt against default rose to the highest in more than 6 1/2 years. 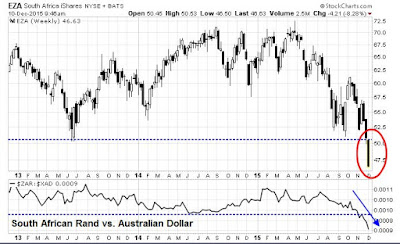 Dani Rodrik wrote a paper in 2008 that is still relevant today. He attributed South Africa’s economic woes of high unemployment and low growth to a neglect of non-resource tradables. Here is the abstract:

South Africa has undergone a remarkable transformation since its democratic transition in 1994, but economic growth and employment generation have been disappointing. Most worryingly, unemployment is currently among the highest in the world. While the proximate cause of high unemployment is that prevailing wages levels are too high, the deeper cause lies elsewhere, and is intimately connected to the inability of the South African to generate much growth momentum in the past decade. High unemployment and low growth are both ultimately the result of the shrinkage of the non-mineral tradable sector since the early-1990s. The weakness in particular of export-oriented manufacturing has deprived South Africa of growth opportunities as well as of job creation at the relatively low end of the skill distribution. Econometric analysis identifies the decline in the relative profitability of manufacturing in the 1990s as the most important contributor to the lack of vitality in that sector.

While Rodrik’s by-the-numbers economic viewpoint does offer a useful framework for analysis, the bigger question is why these policies and orientation evolved. I was a portfolio manager covering South Africa in the mid-1990’s and I can offer my insights this way.

A shortage of human capital
Two important policies during the Apartheid Era shaped the face of modern South Africa and contributed to its malaise. First was the imposition of foreign exchange controls, where capital couldn’t leave, except in relatively small scale and after paying a heavy black market price. The second was the policy of racially segregated schooling. According to The Economist, the government spending ratio on white vs. black education was 16 to 1 (though I had heard figures of 8 to 1 in the 1990s). It was therefore no surprise that modern South Africa experienced a shortage of educated blacks to take up technocratic positions that is sorely needed in both business and government.

The reaction of the whites during the Apartheid Era was different. Foreign exchange controls meant that financial capital couldn’t leave, but human capital could leave – and they did. Many went to English speaking countries like the UK, Australia and Canada. Even in Vancouver, I am not surprised to hear someone speaking with a South African accent.

The result was a country that was sadly lacking in human capital. My general impression of numerous company and government visits in the 1990`s was a management structure composed of a very small group of talented individuals at the top (CEO and possibly the CFO), but with middle management talent that was uncompetitive with developed world standards. In other words, while the generals might have good plans, the troops couldn’t execute them.

Financial engineering over operational excellence
The reaction of the 1% under a regime of exchange controls was to construct vast conglomerates in order to maintain control of their empire in an oligopolistic or monopolistic way. In the post-Apartheid Era, black enterprises unfortunately adopted the same conglomerate structures and engaged in financial engineering with a much lessor focus on proper corporate strategy in operational excellence.

At the same time, the asset management industry was dominated by a few players with very large pools of capital. They couldn’t diversify internationally because of exchange controls. As these were very large institutions, they couldn’t beat the market because they were the market. One approach to add value would have been to become activist investors to prod company managements to add value. A combination of a lack of talent and a culture of cozy and incestuous relationships prevented that course of action.

Despite its problems, today`s South Africa presents opportunities. As an investor, those conditions led me to look beyond the standard financial metrics of ROE, margins, etc. to invest in human capital – companies with management teams with a record of excellence.

For individuals, it also presents opportunity that recalls an anecdote from my days at Batterymarch. On occasion, Batterymarch founder Dean LeBaron would be asked by fresh graduates of what career advice he would have for them for entering a career in finance. Instead of giving them the usual expected spiel about getting a job at a large firm like Goldman Sachs or Morgan Stanley and working their way up, Dean would advise them to move to an emerging market country like Russia, China or Brazil because that`s where the opportunity was. That`s when you could see their faces fall.

I would repeat the same advice about South Africa. If you are talented, then go where there is a lack of human capital.