FOMC preview: 75 or 100 is the wrong question – Humble Student of the Markets

Anticipation is building over the FOMC decision, which is scheduled for this coming Wednesday. Leading up to the meeting, there had been growing speculation over whether the Fed would hike by 75 or 100 bps. Market expectations had been oscillating wildly, but it has now settled into a consensus of 75 bps, followed by a pause in late 2022 and rate cuts that begin in mid-2023. 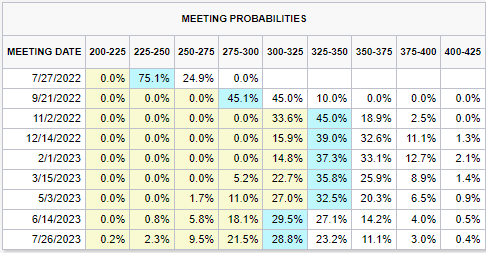 The better questions for investors are:
As inflation indicators have been coming hot, or ahead of expectations, the Fed will undoubtedly employ tough hawkish language in its FOMC statement and subsequent press conference. A recent speech by Fed governor Christopher Waller summarizes the Fed’s tough stance:

Congress did not say “Your goal is price stability unless inflation is caused by supply shocks, in which case you are off the hook.” We want to reduce excessive inflation, whatever the source, in part because whether it comes from supply or demand, high inflation can push up longer-run inflation expectations and thus affect spending and pricing decisions in the near term.

There are signs that inflation may be peaking. Both core CPI and core PCE, which is the Fed’s preferred policy metric, are rolling over. Investors will be scrutinizing the PCE announcement Friday. Market expectations call for stabilization in core PCE at 4.7%.

As well, inflation expectations are also under control.

Supply chain bottlenecks are beginning to ease, as evidenced by falling industrial prices in the G4. 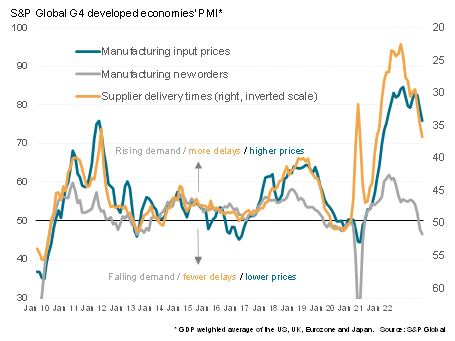 Mentions of “shortage” in the Fed’s Beige Book have been trending down, indicating lower supply chain inflationary pressures. 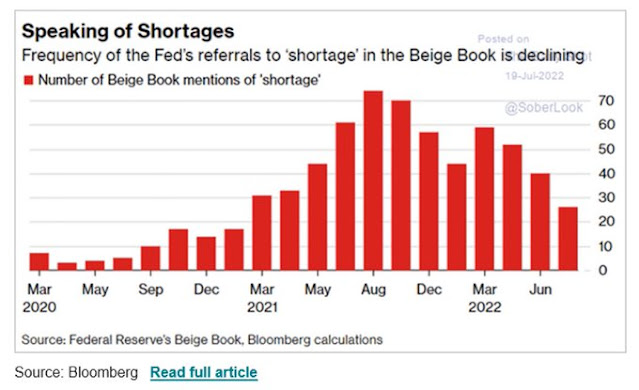 While all of these signs are constructive, the WSJ recently asked, “There Are Signs Inflation May Have Peaked, but Can It Come Down Fast Enough?” It’s a valid question. Ethan Harris at BoA pointed out that the market expects inflation to fall considerably over the next 12 to 24 months, but that isn’t how inflation (which is inertial) has historically behaved. What if inflation doesn’t tank? Are rate cut expectations all that realistic?

A recent speech by Hyun Song Shin, Economic Adviser and Head of Research of the BIS, argued for front-loaded rate hikes because they were historically more likely to result in soft landings. 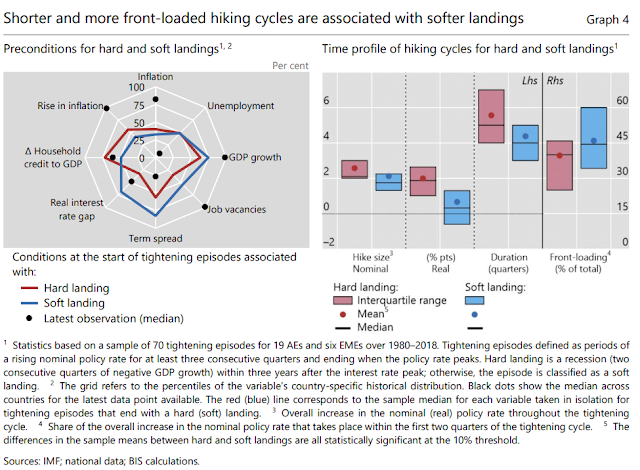 There are many ways of poking holes in the BIS study, mostly because the study period was concentrated in the inflationary 1970’s. A separate paper by Luca Fornaro and Federica Romei argues that current policy has undesired recessionary effects from a global perspective.

During periods of global stagflation, central banks may tighten too much. The reason is that interest rate increases trigger exchange rate appreciations and trade deficits. While these two factors contain domestic inflation, they have the side effect of exporting inflation abroad. So when a central bank hikes, other central banks hike back to sustain their exchange rate and reduce imported inflation. As a result of this “competitive appreciations game”, interest rates end up being too high, and economic activity too low, compared to what would be optimal from a global perspective. There are thus gains from international monetary cooperation in times of high inflation.

In other words, while front-loading rate hikes may raise the odds of a soft landing, globally synchronized rate hikes have undesired recessionary effects. In all cases, it sounds like market expectations of rate cuts by mid-2023 are overly optimistic. Even if the economy were to plunge into recession, inflationary pressures may still be evident and not under control.

When does the Fed blink?

There is one exception to the anti-inflation fighting rule. The event that forces central bankers to spring into action and ease monetary policy is a financial crisis. It is said that the Fed will raise rates until something breaks. US corporate and household balance sheets are in strong positions this cycle and it’s unlikely anything will break, which argues for a continued hawkish Fed.

On the other hand, emerging market defaults have spiked to fresh highs, according to ASR Ltd., EM countries have been the canaries in the global financial coal mine in past cycles. However, ASR observed that contagion risk has been limited so far, “Default risk is mostly limited to smaller, less well-connected countries, limiting the spillover to the global economy. Turkey is the major exception.” 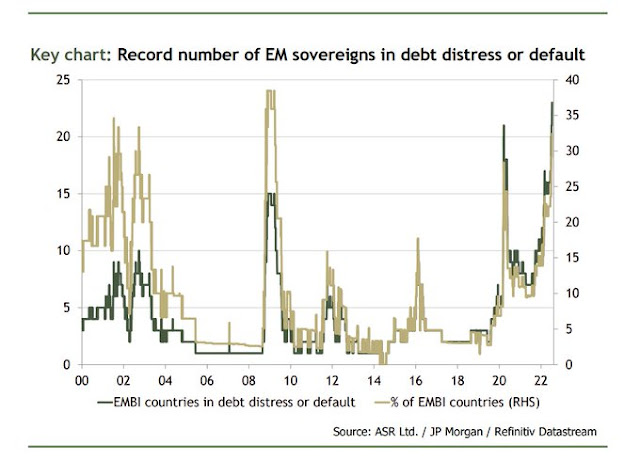 Nevertheless, hard currency EM debt issuance has now turned negative, which is a sign of a global credit crunch. 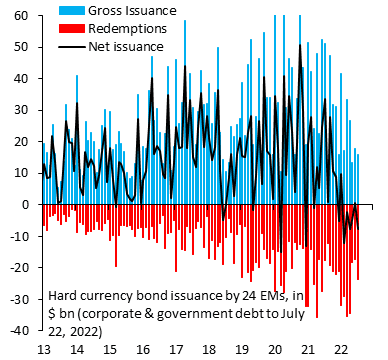 As the US PMI plunges into recession territory and the fragility of EMs becoming evident. While financial crises are by their nature discontinuous events and difficult to predict with any certainty, the markets are expecting a disorderly event by mid-2023. Will the Fed blink then? 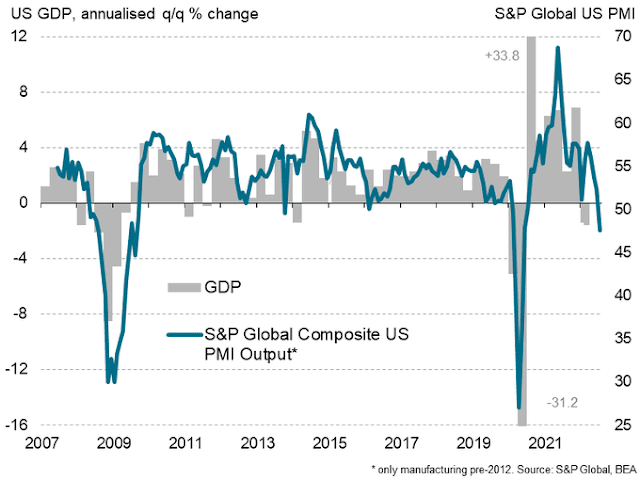 Putting it all together, here is what this all means for investors. Economic data like Philly Fed, ISM, and PMI are all likely to be weak for the next few months. If there is even any hint of disinflationary tendencies, bond prices will rip, and yields tank. 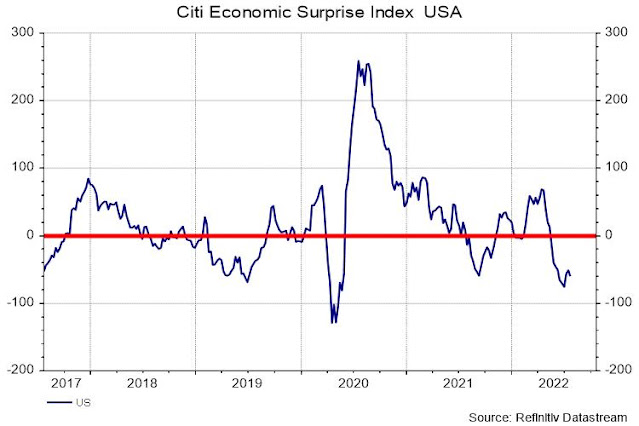 In the past, peaks in long Treasury yields have preceded pauses in Fed Funds rate hikes by a few months. At a minimum, the market expectations of a pause by late 2022 should be correct. Keep an eye on the PCE report Friday.