Don’t fight the (hawkish) Fed – Humble Student of the Markets

Skip to content
As the S&P 500 rises to fresh all-time highs, an important risk is lurking in the form of a more hawkish Fed. Inflation is running hot. When the Fed was officially in the transitory camp earlier this year, inflation pressures were concentrated in only a few components such as used cars. Today, price increases are broadening and even core sticky price CPI (red line) is rising strongly. As a consequence, the Fed made its hawkish pivot and signaled that it is on pace to end its QE program by March 2022, even though inflation expectations (black line) remain well-anchored.

The market is now discounting three rate hikes in 2022, with lift-off to begin in March. Here is how the Fed turned hawkish. 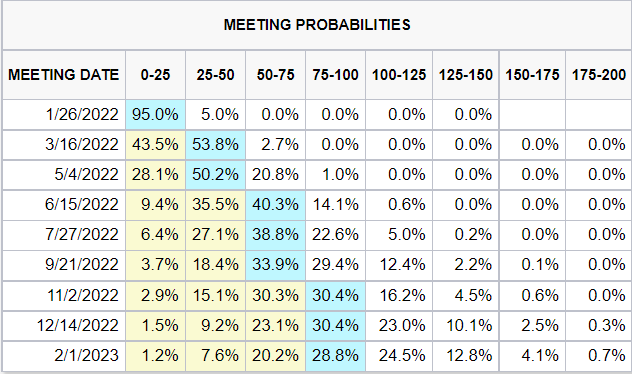 Former Fed economist Claudia Sahm wrote that the Fed doesn’t like to surprise markets. She outlined the steps it takes to prepare the markets for policy shifts [edited for brevity].

Ok, so what does “laying the groundwork” mean? Top Fed officials start ‘dropping hints’ into their speeches, emphasizing the change in economic conditions that warrant the shift. It can be confusing with five Board members and twelve Reserve Bank Presidents who are constantly talking publicly. Here’s my cheat sheet.
Order of importance:
A unique feature of the Powell Fed is there’s another key official to watch:
Board member, Lael Brainard.
Jay elevated Lael to “Troika,” which traditionally includes the Chair and the three roles above. So currently, it’s more of a “Quad” setting the agenda. I would put Brainard’s importance in messaging between Clarida and Williams (2.5).

As inflation pressures rise, the only thing that holds the Fed back from raising rates is its full employment mandate. Powell stated at the December post-FOMC press conference that “the economy has been making rapid progress toward maximum employment”. In short, the labor market is healing on many dimensions.

Amid improving labor market conditions and very strong demand for workers, the economy has been making rapid progress toward maximum employment. Job gains have been solid in recent months, averaging 378,000 per month over the last three months. The unemployment rate has declined substantially, falling six tenths of a percentage point since our last meeting and reaching 4.2 percent in November. The recent improvements in labor market conditions have narrowed the differences in employment across groups, especially for workers at the lower end of the wage distribution, as well as for African Americans and Hispanics. Labor force participation showed a welcome rise in November but remains subdued, in part reflecting the aging of the population and retirements. In addition, some who otherwise would be seeking work report that they are out of the labor force because of factors related to the pandemic, including caregiving needs and ongoing concerns about the virus. At the same time, employers are having difficulties filling job openings, and wages are rising at their fastest pace in many years. How long the labor shortages will persist is unclear, particularly if additional waves of the virus occur. Looking ahead, FOMC participants project the labor market to continue to improve,

Here is why the full employment mandate matters. The December SEP projects the 2021 unemployment rate at 4.3%, falling to 3.5% in 2022 and remaining there for two years. The November unemployment rate is already 4.2%. Already, initial jobless claims normalized to population are at an all-time low.

Powell couldn’t quite bring himself to say the economy is at full employment during the press conference. Instead, he pivoted to that the jobs market is “not going back to the same economy” new era as a way of justifying the hawkish turn in policy.

You know, the thing is, we’re not going back to the same economy we had in February of 2020. And I think early on, that was the sense was that that’s where we were headed. The post-pandemic labor market and the economy, in general, will be different. And the maximum level of employment that’s consistent with price stability evolves over time within a business cycle and over a longer period, in part reflecting evolution of the factors that affect labor supply, including those related to the pandemic. So I would say, look, we’re at 4.2 percent now and it’s been — the unemployment rate has been dropping very quickly. So we’re already in the vicinity of 4 percent. The way in which the — The important metric that has been disappointing really has been labor force participation, of course, where we had widely thought, I had certainly thought that last fall as unemployment insurance ran off as vaccinations increased, that schools reopened, that we would see a significant surge, if you will, or at least a surge in labor force participation. So we’ve begun to see some improvement. We certainly welcome the 2/10 improvement that we got in the November report. But, I do think that it’s — it feels likely now that the return to higher participation is going to take longer. And, in fact, that’s been the pattern in past cycles that labor force participation is — tend to recover in the wake of a strong recovery in unemployment, which is what we’re getting right now. So, you — It could well have been if this cycle was different because of the short nature of it and a very strong — the number of job openings, for example, you would have thought that that would have pulled people back in. But, really, it’s the pandemic, it’s a range of factors. But the reality is, we don’t have a strong labor force participation recovery yet and we may not have it for some time. At the same time, we have to make policy now. And inflation is well above target. So this is something we need to take into account.

The economy is set to continue growing very strongly through at least the first half of next year, and I expect employment to keep growing. With the unemployment rate at 4.2 percent in November, I believe we are very close to meeting the FOMC’s maximum-employment goal. For inflation, as I said earlier, the next few months will be crucial in determining whether price increases will begin to moderate, as I still expect in my baseline outlook. However, I will be closely watching indicators of inflation expectations for signs that consumers and investors have come to expect high inflation well into the future, a development that could signal that the moderation in inflation I expect will not be coming soon.

Waller went further and called for rate hikes to begin in March, shortly followed by a reduction in the Fed’s balance sheet, or quantitative tightening.

In addition, San Francisco Fed President Mary Daly, who is widely considered to be a dove, stated in a NY Times interview that she supports the increased pace of QE taper and could be open to a March rates liftoff.

Ms. Daly said she supported ending bond buying quickly so that officials were in a position to begin raising interest rates. A higher Fed policy rate would percolate through the economy, lifting the costs of mortgages, car loans and even credit cards and cooling off consumer and business demand. That would eventually tamp down inflation, while also likely slowing job growth.

Ms. Daly said it was too early to know when the first rate increase would be warranted, but suggested she could be open to having the Fed begin raising rates as soon as March.

If the Fed were to continue on this signaling path, watch for more important Fed speakers to turn hawkish in the coming weeks.

Despite the hawkish path, the Fed remains data dependent. Policy makers will be closely watching the December Jobs Report due out Friday and the JOLTS report the following week.

The key metrics to watch are the prime-age labor force participation rate (LFPR) and employment to population rate (EPOP). Both haven’t recovered to pre-pandemic levels, but Powell “feels likely now that the return to higher participation is going to take longer”.

As well, temporary jobs and the quits/layoffs ratio have historically led Non-Farm Payroll and both indicators are flattening out.

The quits rate will also be closely watched in the JOLTS report. While the historically high quits rate has been dubbed the Great Resignation, the surge has been concentrated in lowly paid leisure and hospitality, and retail industries. In a tight jobs market, participants are quitting and upgrading to better paying positions. 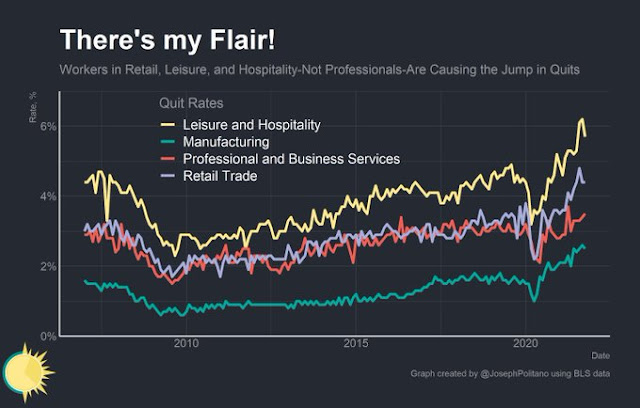 Even though the Fed is set on a hawkish path, here are some developments that could shift policy in a more dovish direction. The rapid transmission of the Omicron variant could cause a sudden collapse in global economic activity, as demonstrated by the recent widespread flight cancellations due to the infections of flight crews. The announcement from Centers for Disease Control and Prevention to reduce the recommended isolation and quarantine times should alleviate some of the pressure, but the economic effects of these measures remain to be seen. 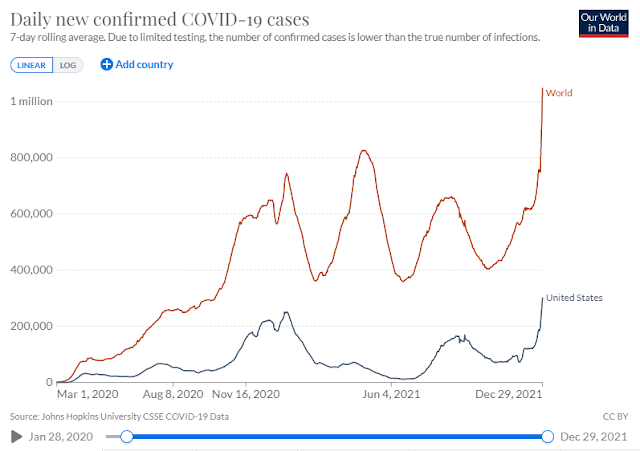 In the meantime, the WSJ reported that economists are reducing their GDP growth forecasts because of the effects of the Omicron variant. 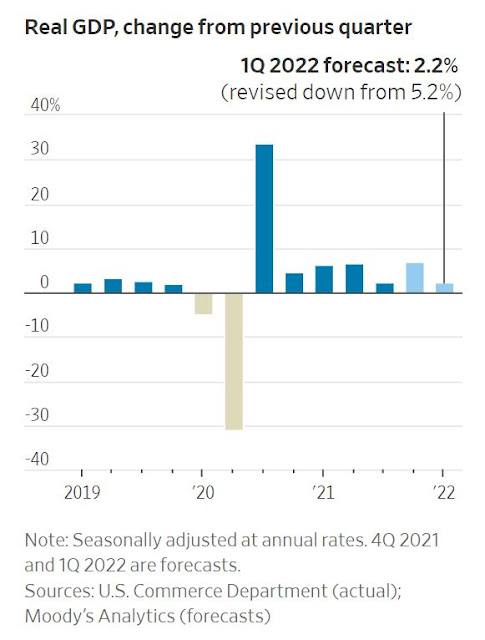 Improvements in the Citigroup Economic Surprise Index, which measures whether economic data is beating or missing expectations, have also begun to stall. 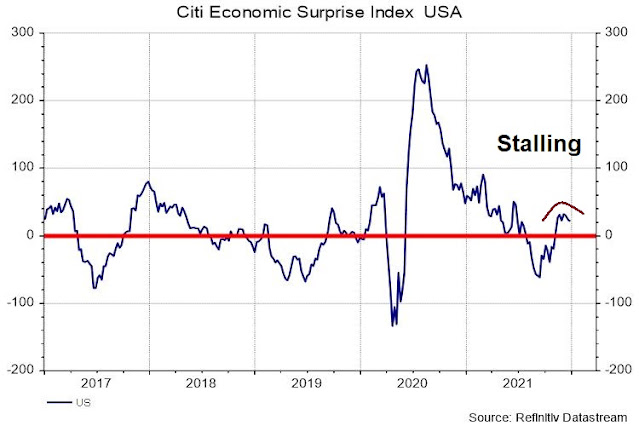 Similarly, the growth rate of ECRI’s Weekly Leading Index is rolling over. 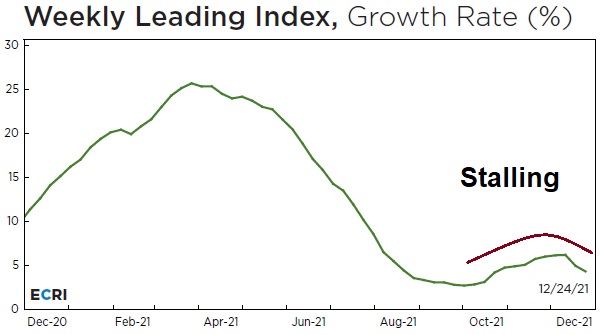 As well, a sudden deceleration in fiscal impulse could also dent the growth outlook. In the wake of Senator Joe Manchin’s withdrawal of support of Biden’s Build Back Better fiscal stimulus plan, expected fiscal spending is will be weaker in 2022. Barron’s reported that Goldman cut projected GDP growth. Other strategists won’t be far behind. While Fed officials are mainly focused on their dual mandate of price stability and full employment, they are not completely blind to the effects of fiscal policy.

“We had already expected a negative fiscal impulse in 2022 as a result of the fading support from Covid-relief legislation enacted in 2020 and 2021, and without Build Back Better enactment, this fiscal impulse will become somewhat more negative than expected,” a team led by chief economist Jan Hatzius said in a note Sunday.

Be cautious (for now)

In conclusion, the Fed doesn’t like to surprise markets and is poised to reinforce its hawkishness in its communication strategy in the coming weeks. The yield curve is already flattening, which is the bond market’s signal that it expects slower economic growth ahead. A flattening yield curve also reflects fears of a policy error. The Fed may be over-tightening and will have to reverse course later. 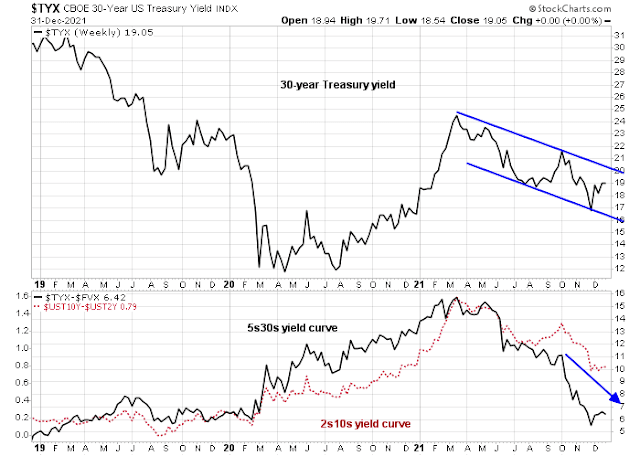 FANG+ stocks are the new defensive positioning under such a scenario. In a growth starved world, investors will bid up the prices of cash generative growth companies. The relative performance of the NASDAQ 100 has exhibited a rough inverse correlation with the 10-year Treasury yield.

However, the expected large-cap growth leadership should begin to fade when inflation pressures begin to abate. Keep an eye on the evolution core PCE as 2022 progresses. The Fed has penciled in a 2022 core PCE inflation rate of 2.6% in its Summary of Economic Projections. If inflation pressures begin to fade and monthly changes in core PCE fall to 0.2% for several months, the Fed would interpret this as a signal that inflation is under control and shift to a more dovish stance. Under such a scenario, the yield curve would begin to steepen again, indicating a better growth outlook, and equity leadership should rotate from large-cap growth into value and cyclical stocks.