The inflation challenge – Humble Student of the Markets

Inflation fears have been rising in the wake of the hot October CPI report. Barry Ritholz, the CEO of Ritholz Wealth Management, recently issued an open challenge to the inflationistas.

Which side of that bet would you take?

Inflation concerns are becoming widespread. FactSet reported the highest number of companies citing “inflation” on their earnings calls in 10 years. 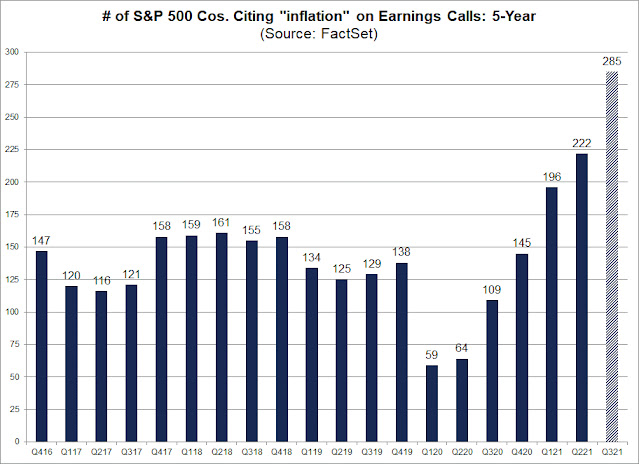 While virtually all sectors saw rising “inflation” citations in their earnings calls, the one silver lining for the consumer is inflation pressures were tame in consumer staples and utilities. 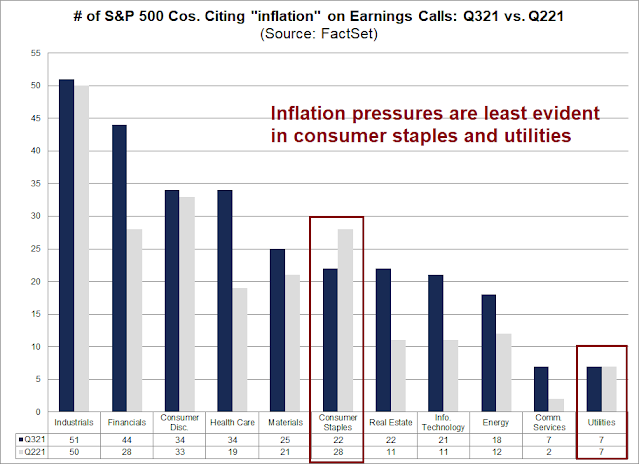 A glass half full, or half-empty?

There has been a growing cacophony of voices calling for tighter monetary as fears that the Fed is behind the inflation-fighting curve grows. The accompanying chart depicts the heart of Ritholz’s inflation challenge. The blue line shows the 2-year Treasury yield less core CPI, which has been plunging owing to the surge in reported inflation. Readings have fallen to levels not seen since 1980 when Paul Volcker really applied the monetary brakes to wring inflationary expectations out of the system. The red line shows 2-year Treasury yields less the 5×5 inflation expectations, which is negative but turning up. One uses a backward-looking inflation metric and the other uses a forward-looking indicator. Which should Fed policy makers pay the most attention to?

If the inflationistas are right, how much should the Fed tighten? Former New York Fed President Bill Dudley penned a Bloomberg Op-Ed highlighting the risks. The later the Fed waits to tighten policy, the higher the risk that such a policy path could lead to recession. The potential peak policy rate in this cycle may be as high as 3-4%, which would well ahead of market expectations. Even a 3% Fed Funds rate would mean an inverted yield curve, which usually foreshadows a recession.
For what it’s worth, the Taylor Rule under different assumptions calls for a Fed Funds target of between 5.0% and 5.8%, which is substantially higher. 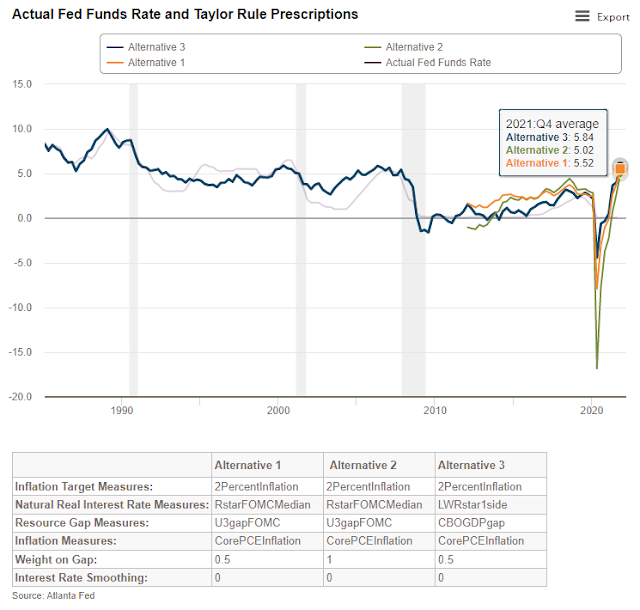 What’s the answer on the inflation bet? The Bank of International Settlements recently published a research note which concluded that supply chain bottlenecks accounted for 2.8% of the recent inflationary spike in the US and 1.3% in the euro area [emphasis added]:

The mechanical effect on CPI inflation from the price increases for bottleneck-affected items has been notable in recent months. If energy and motor vehicle prices in the United States and the euro area had grown since March 2021 at their average rate between 2010 and 2019, year-on-year inflation would have been 2.8 and 1.3 percentage points lower, respectively…That said, once relative prices have adjusted sufficiently to align supply and demand, these effects should ease. Some price trends could even go into reverse as bottlenecks and precautionary hoarding behaviour wane. The mechanical effect on CPI could well turn disinflationary during this second phase.

The pandemic caused both a supply and demand shock to goods and services. Goods demand shot up while services demand cratered. Over time, increased investment in the goods sector should alleviate most of the bottlenecks and the inflation shock is forecasted to dissipate after three or four quarters. 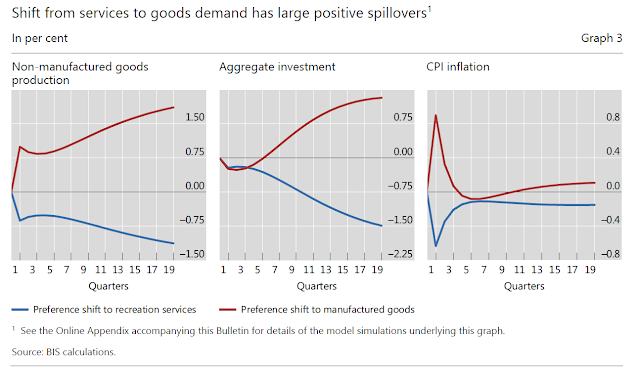 The BIS expects inflation to fade in the coming months. Moreover, a Bloomberg article highlighted the degree of fiscal drag on the horizon, which will also have a deflationary impact. 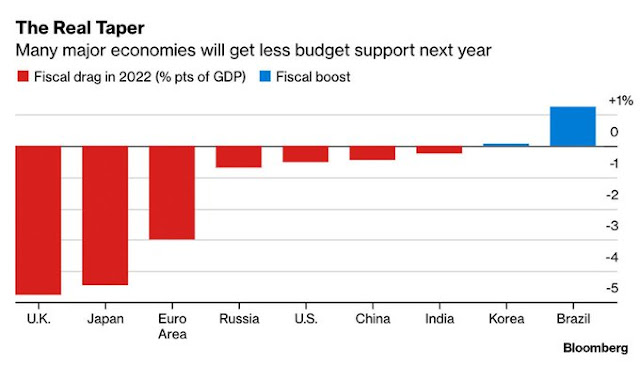 What does this mean for investors? For equity investors, the inflation spike has been good for profits, according to the WSJ.

Companies are paying higher wages, spending more for materials and absorbing record freight costs, pushing up economic inflation gauges. They are also reporting some of their best profitability in years.
Executives are seizing a once in a generation opportunity to raise prices to match and in some cases outpace their own higher expenses, after decades of grinding down costs and prices…
Nearly two out of three of the biggest U.S. publicly traded companies have reported fatter profit margins so far this year than they did over the same stretch of 2019, before the Covid-19 outbreak, data from FactSet show. Nearly 100 of these giants have booked 2021 profit margins—the share of each dollar of sales a company can pocket—that are at least 50% above 2019 levels.

As long as inflation expectations are rising, that should be bullish for equities. The key is timing the inflection point. I am monitoring gold and the price of TIPs. Any weakness will be a signal to de-risk portfolios. 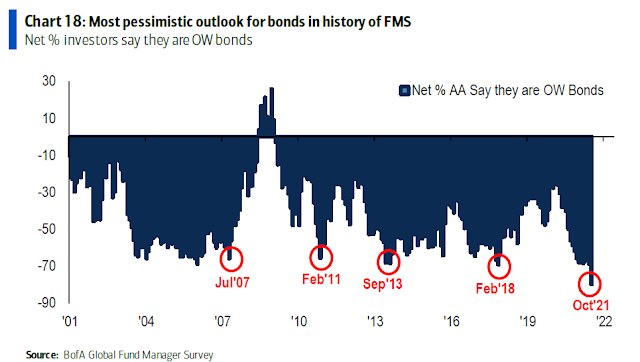 In conclusion, the recent inflation surge is temporary. It’s difficult to time the exact top in inflationary expectations, but any loss of momentum in gold and TIPs prices should be regarded as a signal for investors to reposition portfolios away from equities into bonds.

21 thoughts on “The inflation challenge”