Unsettling news from Crypto-Land – Humble Student of the Markets

Skip to content
The NY Times recently published a note with the headline, “Crypto regulation heats up”.

The wrangling over spending bills and debt-ceiling dramas may be generating the biggest headlines in Washington, but the race to regulate the fast-growing cryptocurrency industry is also ramping up. Here’s a tour of some of the key developments this week:
Activist groups target crypto’s environmental impact. Today, more than 70 nonprofit groups, including the Sierra Club, the Open Markets Institute and the Action Center on Race and the Economy, urged Congress to consider crypto’s energy use when writing new rules for the sector. “As you explore legislative and regulatory responses to ensure investor protection in the industry, it is critical that you also consider the financial stability risks that climate change presents,” they wrote in a letter shared exclusively with DealBook that took particular issue with many cryptocurrencies’ energy-intensive “mining” process.
Industry players make the case for balance. The venture capital firm Andreessen Horowitz submitted a proposal to the Senate Banking Committee outlining its view on the future of digital assets and decentralized technology. The firm, which runs a big crypto fund, urged lawmakers to “ensure that the private sector can experiment and build” as it protects against “the real downside risks that might otherwise harm individuals.”
They also complain about burnout. Brian Armstrong, the C.E.O. of Coinbase, a large crypto exchange, tweeted yesterday that company chiefs in the U.S. were under too much pressure from officials, the news media and the public. He likened this to the crackdown on companies in China, “putting something that gets too successful in its place.”
Crypto notches a win. The S.E.C. approved Volt Equity’s exchange-traded fund that tracks companies whose values swing with Bitcoin prices, with an emphasis on firms that hold Bitcoin on their balance sheets. It’s not quite a pure Bitcoin E.T.F., but it brings the industry closer to that long-sought goal. Investors want “exposure to Bitcoin price movement,” Volt Equity’s Tad Park told DealBook, without necessarily buying crypto directly.

There is a more serious problem that they didn’t cover. I recently published a post raising questions about Tether (see The brewing crisis in Crypto-Land). A Tether is a stablecoin used regularly in the offshore market to trade cryptocurrencies. They are supposed to be backed 1-for-1 to the USD. There are now $69 billion Tether in circulation. This would make Tether one of the biggest banks in the US, except that it’s not a bank and not subject to regulation.
A recent Bloomberg article traced down Tether’s billions and found some disconcerting results. 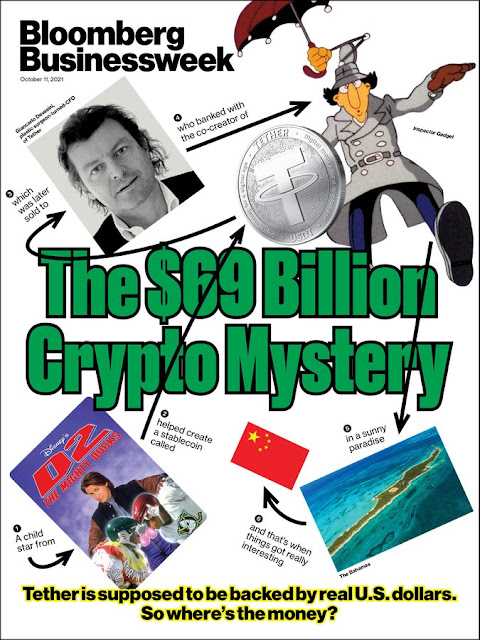 For some background on the use of Tether, Bloomberg reporter Zeke Faux went to one of the biggest crypto conferences in Miami in June:

The place was full of people who held Tether. Sam Bankman-Fried, a 29-year-old billionaire who was in town to rename Miami’s basketball arena after his cryptocurrency exchange, FTX, told me he’d bought billions of Tethers, using them to facilitate trading other coins. “If you’re a crypto company, banks are nervous to work with you,” he said.
His explanation doesn’t make much sense if you still think of Bitcoin as a peer-to-peer currency, an ingenious way to transfer value without an intermediary. But most people aren’t using cryptocurrencies to buy stuff. They’re trading them on exchanges and betting on their value, hoping to make a real money score by picking the next Dogecoin, which spiked 4,191% this year after Elon Musk started tweeting about it, or Solana, up 9,801% in 2021 for seemingly no reason at all.
Think of crypto exchanges as giant casinos. Many of them, especially outside the U.S., can’t handle dollars because banks won’t open accounts for them, wary of inadvertently facilitating money laundering. So instead, when customers want to place a bet, they need to buy some Tethers first. It’s as if all the poker rooms in Monte Carlo and the mahjong parlors in Macau sent gamblers to one central cashier to buy chips.
The biggest traders on these exchanges told me they routinely bought and sold hundreds of millions of Tethers and viewed it as an industry standard. Even so, many had their own conspiracy theories about the currency. It’s controlled by the Chinese mafia; the CIA uses it to move money; the government has allowed it to get huge so it can track the criminals who use it. It wasn’t that they trusted Tether, I realized. It was that they needed Tether to trade and were making too much money using it to dig too deeply. “It could be way shakier, and I wouldn’t care,” said Dan Matuszewski, co-founder of CMS Holdings LLC, a cryptocurrency investment firm.

If someone gave Tether USD 100 and received 100 Tethers in return, what happens to that $100? After some pressure, Tether published its asset holdings and disclosed, “Every Tether is always 100% backed by our reserves, which include traditional currency and cash equivalents and, from time to time, may include other assets and receivables from loans made by Tether to third parties, which may include affiliated entities.”

If half of its assets is in commercial paper (CP), which is short-term paper issued by (usually) top-rated borrowers, that would make the company one of the biggest CP players in the world. But no CP dealer has heard of them. So where are Tether’s billions?
Here is the key quote from Faux [emphasis added].

I obtained a document showing a detailed account of Tether Holdings’ reserves. It said they include billions of dollars of short-term loans to large Chinese companies—something money-market funds avoid. And that was before one of the country’s largest property developers, China Evergrande Group, started to collapse. I also learned that Tether had made loans worth billions of dollars to other crypto companies, with Bitcoin as collateral. One of them is Celsius Network Ltd., a giant quasi-bank for cryptocurrency investors, its founder Alex Mashinsky told me. He said he pays an interest rate of 5% to 6% on loans of about 1 billion Tethers. Tether has denied holding any Evergrande debt, but Hoegner, Tether’s lawyer, declined to say whether Tether had other Chinese commercial paper. He said the vast majority of its commercial paper has high grades from credit ratings firms, and that its secured loans are low-risk, because borrowers have to put up Bitcoin that’s worth more than what they borrow. “All Tether tokens are fully backed, as we have consistently demonstrated,” the company said in a statement posted on its website after the story was published.
Tether’s Chinese investments and crypto-backed loans are potentially significant. If [Tether CFO] Devasini is taking enough risk to earn even a 1% return on Tether’s entire reserves, that would give him and his partners a $690 million annual profit. But if those loans fail, even a small percentage of them, one Tether would become worth less than $1. Any investors holding Tethers would then have an incentive to redeem them; if others did it first, the money could dry up. The bank run would be on.

I supposed the good news is they didn’t lend to China Evergrande, but Chinese USD paper seems awfully dodgy in the current environment. The sympathetic view is Tether’s CFO Giancarlo Devasini has transformed Tether into a Berkshire Hathaway, where he uses the float to earn money for himself and his partners. The less charitable view is the company is now a giant and leveraged hedge fund in which Devasini enjoys the gains and the depositors get stuck with the losses.

When will the bank run begin? Your guess is as good as mine.

3 thoughts on “Unsettling news from Crypto-Land”