Not your father’s stagflation threat – Humble Student of the Markets

Stagflation worries are rising. A recent analysis of search activity shows that searches for stagflation have spiked compared to other inflation search terms. 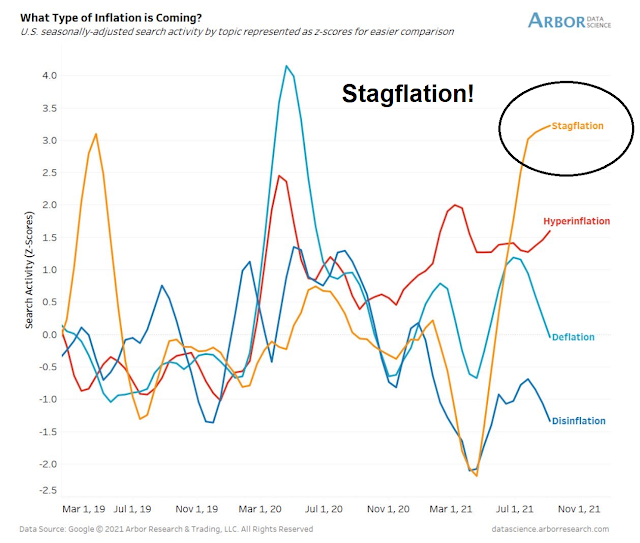 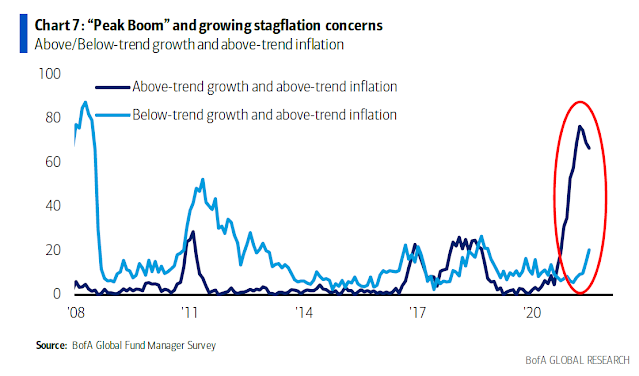 These fears are misplaced. The conventional mechanisms for stagflation are not present. Instead, investors should be prepared for a different sort of stagflation threat.

When investors think about stagflation, they think back to the 1970s, which was a period of high inflation and anemic economic growth. Arguably, the roots of inflation began with Lyndon Johnson’s “guns and butter” policy in his conduct of the Vietnam War and his Great Society programs. The combination of overly expansive fiscal and monetary policies led to rising inflationary pressures, which eventually manifested themselves in the runaway inflation of the 1970s.

Fast forward to 2021. Top-down data shows the combination of strong positive inflation surprise and falling economic surprise. The combination of these factors is giving rise to stagflation fears. 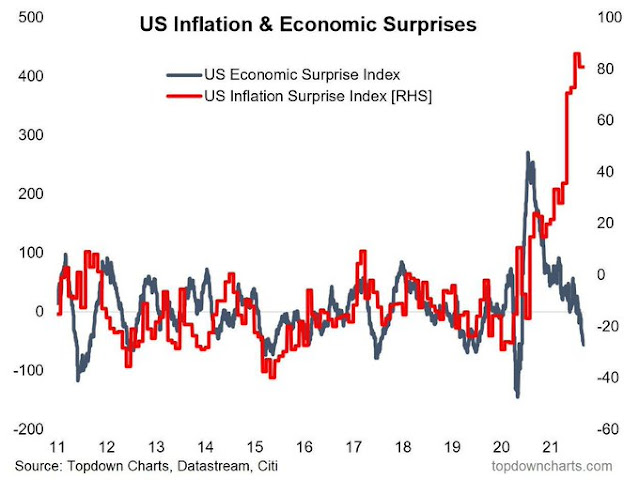 The culprit is some mix of disrupted supply chains, high transportation costs, container scarcity and congested ports…
Fewer chief executives have confidence that such disruptions are temporary and quickly reversible. This will restrain growth plans despite robust demand, and increase pressure to raise prices to offset higher costs…Such reversible factors are accompanied by supply side troubles that could last for one to two years, if not more
Added to inflation already in the pipeline, all this translates into stagflationary winds for the global economy that are unfamiliar to those that did not live through the 1970s.

These fears are misplaced. I have argued in the past (see How to engineer inflation), that the conventional models for explaining inflation have been unsatisfactory.

It is said that deficit spending would lead to currency devaluation and inflation in the manner of the Weimar Republic. Nothing could be further from the truth. The blue line represents federal government deficits as a percentage of GDP. Deficits began to balloon in the early 1980`s with the Reagan Revolution and continued during the Bush I era. Did inflation (purple line) explode upward?
Monetary policy had its own failure. Monetarist Theory, as popularized by Milton Friedman, was another model that backtested well but failed out of the box. Friedman postulated that the PQ=MV, where the Price X Quantity of goods and services (or GDP) = Money Supply X (Monetary) Velocity. Friedman theorized that, over the long run, monetary velocity is stable, and therefore money supply growth determines inflation. All central banks had to do was to control money growth in order to control inflation.
It worked until about 1980. Monetary velocity had been stable until about then. Money growth didn’t generate inflation because monetary velocity fluctuated wildly. Growth in money supply, as measured by M1, was often matched by declines in velocity. The Fed could engineer money growth and inject liquidity into the financial system without creating inflation.

Instead, investors should focus on the evolution of wage gains as the key factor to inflation pressures. The Fed has stated that it is focused on wage inequality as an additional metric of labor market tightness and it will conduct monetary policy accordingly.
The following factors do not indicate a return to a stagflation environment over the next few years.

Here is why Fed policymakers believe that inflation pressures are largely transitory. Most of the inflation has been concentrated in durable goods, which are subject to supply chain bottlenecks. The August CPI print came in below expectations, which was positive for the doves in the FOMC. Even Owners’ Equivalent Rent, which has a significant weight in CPI and has been a subject of concern for many economists, was tame.

In addition, IMF Chief Economist Gita Gopinath pointed out that high inflation is correlated with “the speed of recovery and bounce back in demand”. This is indicative of a cyclical effect that is undoubtedly affected by short-term shortages. 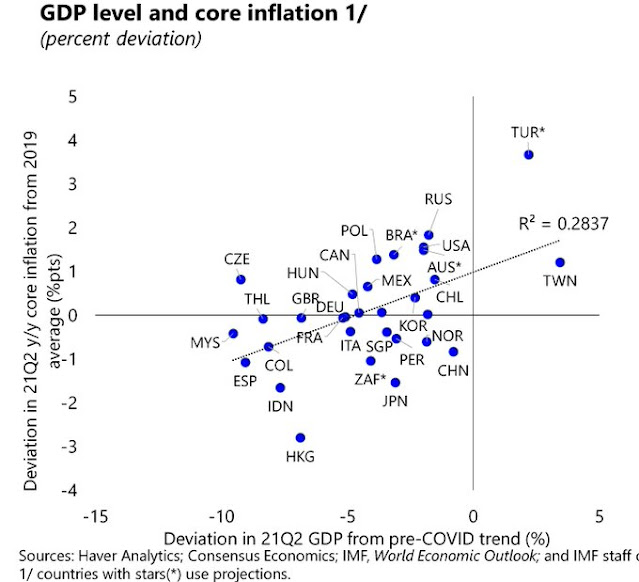 There are signs that the supply chain disruptions are beginning to ease. Bloomberg reported that “Shipping Lines Think Spot Rates Have Peaked”.

One of the world’s biggest shipping lines has decided to stop increasing spot freight rates on routes out of Asia to Europe and the U.S. as it sees an end to the rally that has seen prices hit records.
Hapag-LLoyd AG thinks spot rates have peaked and further increases are “not necessary,” according to Nils Haupt, the Hamburg-based company’s head of corporate communications. The move comes after French rival CMA CGM SA last week froze rates, saying it was prioritizing long-term relationships following a rally that has seen some spot rates jump more than sixfold in the past year.

Rising capital expenditures is another factor that should put conventional stagflation fears to rest.
The monthly NFIB report is useful because small businesses are sensitive barometers of the economy because of their lack of bargaining power. The latest report shows that small business plans for raising prices are skyrocketing, indicating short-term inflation pressures. However, capex plans are rising as well, which should increase productivity, raise the growth outlook and act to restrain inflation pressures. 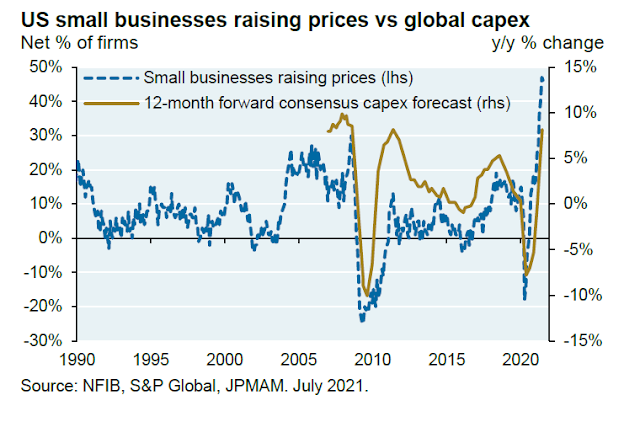 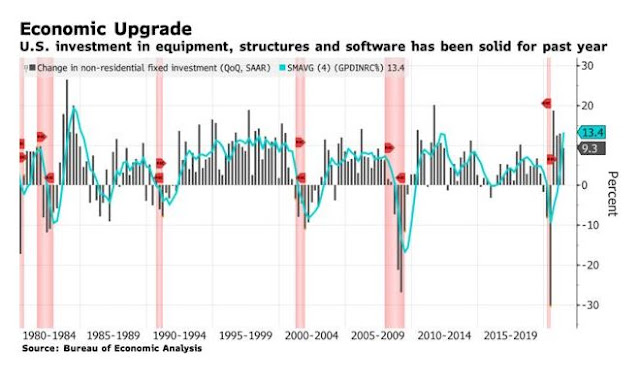 During the 1970s, economists created the Misery Index by adding the inflation rate to the unemployment rate as a way of measuring the stagflation stresses on the economy. Today, the Misery Index has spiked but started to roll over. 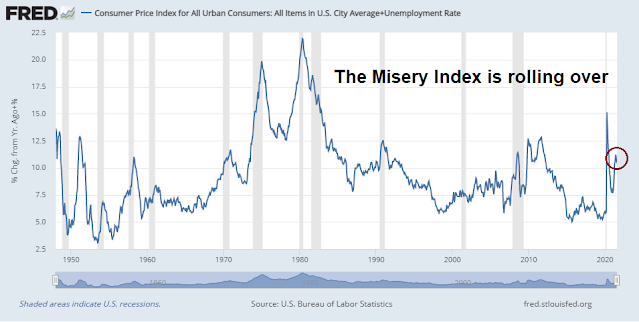 If the market narrative of transitory inflation is correct and the recovery continues, the Misery Index should continue to fall. Is this what stagflation looks like?

A different source of stagflation risk

It’s also important to keep a historical perspective. Supply chain disruptions are not new, though today’s is more widespread than in the recent past. For example, the earthquake and tsunami that hit Japan in March 2011 disrupted supply chains and risked upward pressures on inflation, as noted by Mohamed A. El-Erian:

Third, the Japanese disasters are not happening in isolation. They add to the supply shock that the global economy already faces due to the uprisings in the Middle East and the related increase in oil prices. As such, the risk of a global macro tipping point cannot, and should not, be ignored.

Hawks gonna squawk, people. As with now, the Federal Reserve viewed the supply chain disruption in Japan as a temporary risk to inflation and economic activity in the United States. Accordingly the Fed did not view a change in monetary policy as an appropriate response. The following is from a special section in the staff forecast for the FOMC (now public) on “Economic  Effects of the Earthquake  in Japan”.

Dislocations in Japan resulting from the earthquake are likely to affect foreign economies through three main channels:  Diminished Japanese demand for other countries’ exports, lower foreign direct investment and portfolio flows from Japan, and disruptions to cross‐country supply chains.  We expect the first two channels to be fairly minor, given that Japan accounts for a relatively small share of trade and investment inflows for most countries, especially outside of Asia.  Disruptions to supply chains represent the main concern at present.  Some Asian producers, particularly in the high‐tech sector, are highly dependent on intermediate inputs imported from Japan.  However, although production in certain firms and sectors is being disrupted, the aggregate results will likely be limited.  Many of the Japanese plants that shut down in the aftermath of the earthquake are already back on line, though not yet at full capacity, and there is scope for resourcing to alternative suppliers.  All told, we expect the earthquake to shave about ½ percentage point from GDP growth in emerging Asia in the second quarter, with this negative effect unwinding in the second half of 2011 as normalization in activity and Japanese reconstruction increase demand for industrial supplies and capital goods.  The effect on GDP growth in the advanced economies is likely to be even smaller, with modest disruptions reported to production of motor vehicles in the United States, Europe, and Canada because of shortages of auto parts from Japan.

We should take today’s disruption as a warning. I heard early in the pandemic someone refer to Covid as our dress rehearsal for climate change. It ain’t looking good. Covid is a global crisis and its toll on human life is crushing. That said, we have a vaccine that works, and we will eventually contain the pandemic enough that we will work around the current economic log jams.
Climate change is a whole different ballgame. No company is going to engineer a cure over the weekend. Complain about the FDA now? Get ready for lots more complaining. Supply chain disruptions will not be the biggest problem we have during climate disasters, but Covid underscores some of the economic costs on the horizon. We are interconnected globally and as result, we are in this together. The answer now is to get vaccines to the world community as fast as possible. The United States should be leading with more great urgency. We are not. Climate change? Good luck with that.

Climate change is a controversial subject in many circles and the pros and cons of the topic are beyond the scope of this publication. Nevertheless, the world has seen an unusual series of heatwaves and floods in 2021 which has been attributed to climate change. Should they continue, these disasters raise the risk of further supply chain disruptions in the years ahead. While conventional triggers of stagflation are under control, a rolling series of inflationary spikes could trigger a period of inflationary volatility and slowing growth. Investors need to be prepared for this risk of stagflation for an unusual source.

Global ESG assets are on track to exceed $53 trillion by 2025, representing more than a third of the $140.5 trillion in projected total assets under management. A perfect storm created by the pandemic and the green recovery in the U.S., EU and China will likely reveal how ESG can help assess a new set of financial risks and harness capital markets. 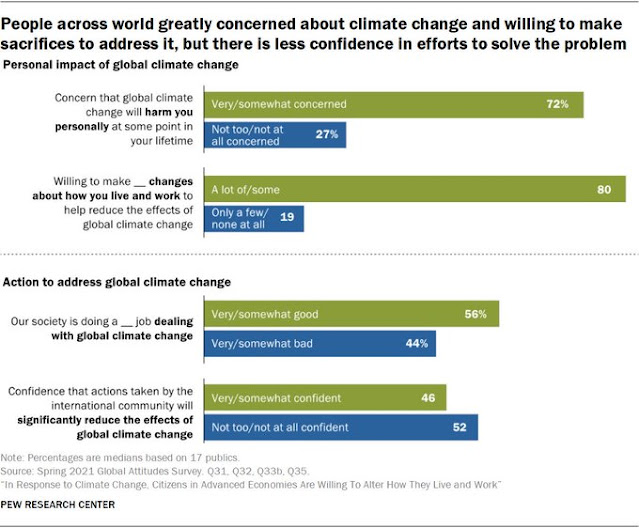 However, ESG investing comes with an important caveat. ESG funds tend to have a technology and growth tilt. That’s because it’s far easier for a company like Microsoft to qualify under an ESG screen than Exxon Mobil. The “E” in ESG investing has caused a close correlation of ESG to growth investing. 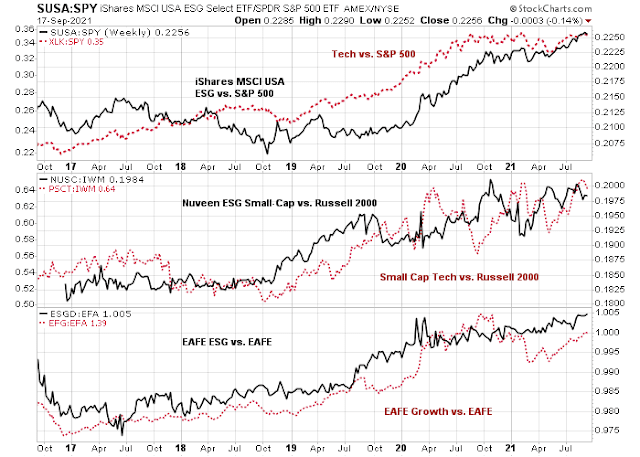 There are also short-term risks. The top two categories in the latest BoA Global Fund Manager Survey are long technology and long ESG, which amount to almost the same factor exposure. 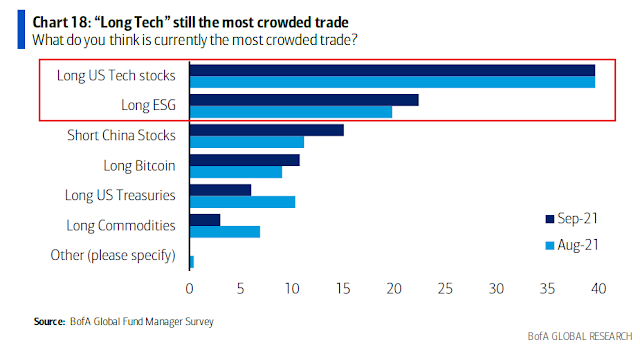 In summary, ESG diversification could be an important source of long-term portfolio stability should climate change spark a rolling series of supply chain disruptions. However, investors who adopt this strategy may face the near-term risks of underperformance.

10 thoughts on “Not your father’s stagflation threat”