The bears take control – Humble Student of the Markets

Mid-week market update: I have been saying for several weeks that the stock market is vulnerable to a setback but it is a bifurcated market. Value stocks have held up well, but growth stocks were getting smoked. The bears finally broke through this week and they are showing signs that they are seizing control of the tape. Defensive sectors are exhibiting signs of relative breakouts against the S&P 500. 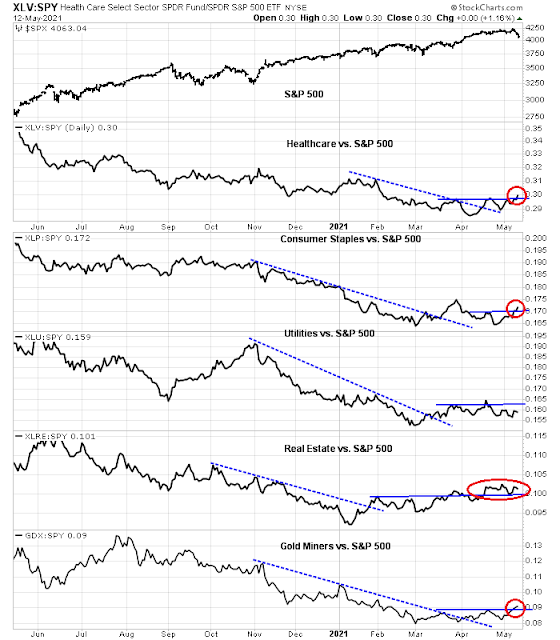 Time for a pause

Several factors have combined to spark this setback in stock prices. First, retail investors are losing interest in stocks. 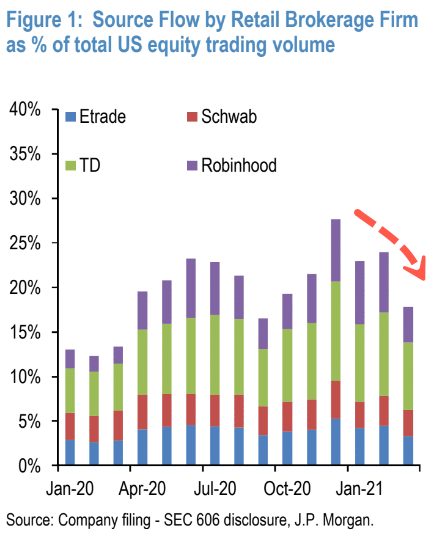 Remember the retail frenzy as the Reddit crowd whipped up enthusiasm for meme stocks last year? Remember how flash mobs drove up selected issues with call option buying which forced market makers to hedge by buying the underlying stocks? That’s mostly gone. In the short run, there was a lot of hand-wringing about the call buying as a sign of excessive speculation. My longer-term view is a rising equity call/put ratio is a sign of bullish momentum and rising call/put ratios were coincidental with equity bull phases. In the past, a decline of the 50-day moving average (dma) of the call/put ratio below the 200 dma has signaled pauses in bullish advances in the past (top panel). 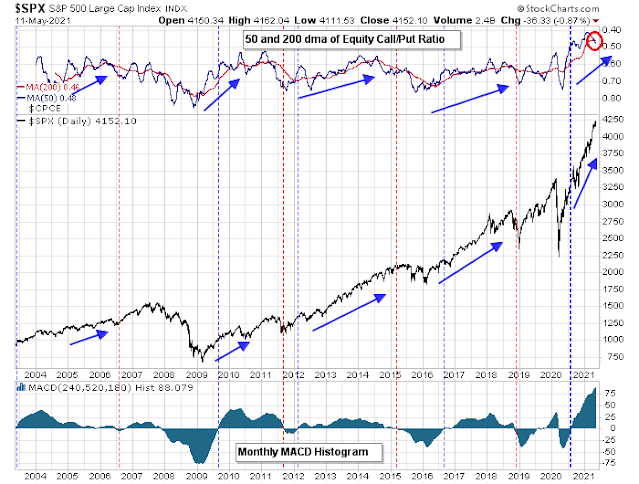 Bad news from overseas on the pandemic front may have also contributed to the risk-off tone. Bloomberg reported that “a wave of new restrictions is spreading across Asian countries trying to stamp out small Covid-19 outbreaks”.

Taiwan announced limits on crowds, following Singapore’s move to restrict foreign workers, in a wave of new restrictions in Asian countries trying to stamp out small outbreaks after months of keeping Covid-19 contained.
The new curbs prompted fears that economic growth could stall out, leading to stock sell-offs in both countries this week. Low vaccination rates in both countries are contributing to concerns that their populations could be vulnerable if faster-spreading variants take hold.
Singapore — the city-state that is ranked the best place to be in the coronavirus era by Bloomberg’s Covid Resilience Ranking — has also been tightening up restrictions amid a sudden recurrence of local infections, limiting social gatherings and upping border curbs. The co-chair of Singapore’s virus task force, Lawrence Wong, said Tuesday that companies looking to bring in foreign workers from higher-risk nations could face delays of more than six months because of the greater vigilance. The country has also begun mass testing all hospital staff in an attempt to fence off infections, after a cluster of cases emerged at a medical center.
Elsewhere in Asia, cases are also coming back, with India now the epicenter of the global crisis, recording more than 329,000 new cases Tuesday. Malaysia is tightening curbs on people’s movements across the country after daily cases exceeded 3,000 this month for the first time since February.
The detection of the one case with Indian Covid-19 variant has added to the risk, and Malaysia is struggling with the pace of vaccinations. Less than 3% of the population had completed their vaccination series as of May 9, data compiled by Bloomberg show. That tally trails Indonesia and Singapore, and puts Malaysia at risk of falling short of its vaccination target for the year.

One reader alerted me that Jason Goepfert at SentimenTrader had highlighted an unusual number of buying climaxes on Monday, which is a bearish signal.

The burst of gains and push to new highs early on Monday was reversed during the session, causing a spike in the number of stocks suffering a buying climax. This is triggered when a stock hits a 52-week high then reverses to close below the prior day’s close, potentially a sign of exhaustion among buyers.
Our Backtest Engine shows that this is the 6th-largest number of climaxes in a single day since the inception of SPY.
Every time more than 95 stocks suffered a buying climax, the S&P 500 showed a loss over the next 1-2 months. There were few losses over the next 6-12 months, and they were relatively small. 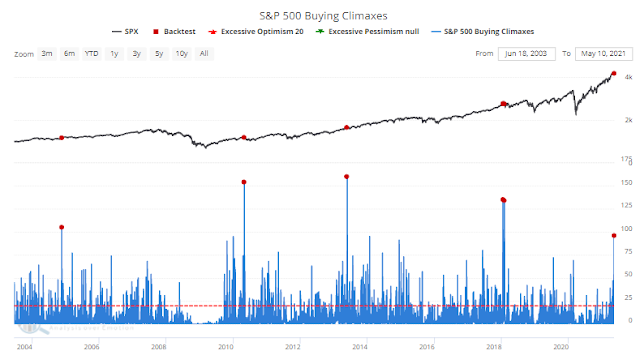 Equally disturbing is the performance of the bellwether growth-cyclical Semiconductor Index (SOX). SOX violated both absolute and relative rising trend lines that stretched back a year. 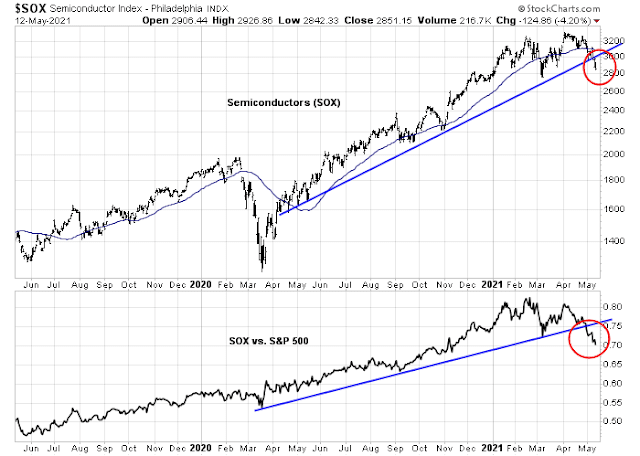 Putting it all together, these are all signs that the bears are taking control of the tape.

The S&P 500 pullback is unlikely to be very deep. If I had to guess, a logical support level is the 50 dma at about 4050, which represents a peak-to-trough downside risk of only -4.4% and only -1% from current levels. Some of my bottoming indicators are already starting to come into place. 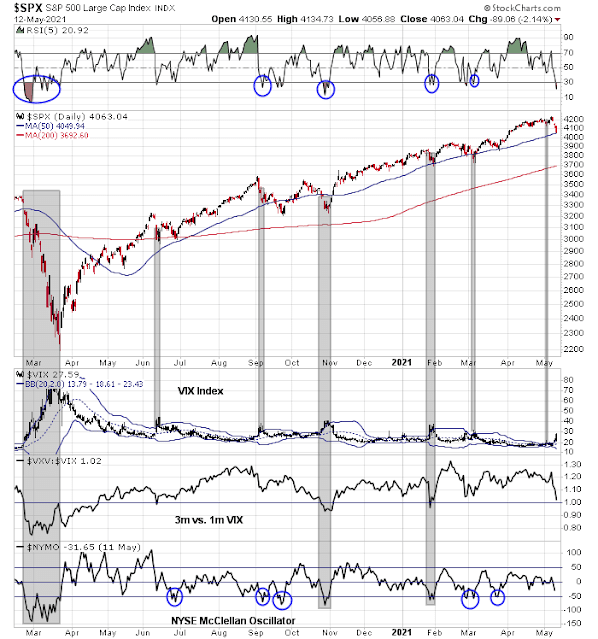 However, the term structure of the VIX is not inverted, indicating fear. We need panic to set in for a durable bottom. As well, the NYSE McClellan Oscillator (NYMO) has not flashed an oversold condition yet.
While the S&P 500 is holding up relatively well and being supported by the relative strength of value stocks, growth stocks show considerably more downside risk. Despite violating its 50 dma and violating an important relative support zone, the NASDAQ 100 (NDX) is not showing any signs of a durable bottom ahead. The % of NDX stocks above their 50 dma is not oversold, and neither is the NASDAQ McClellan Oscillator (NAMO). The most logical support level for NDX is the 200 dma at about 12,500. 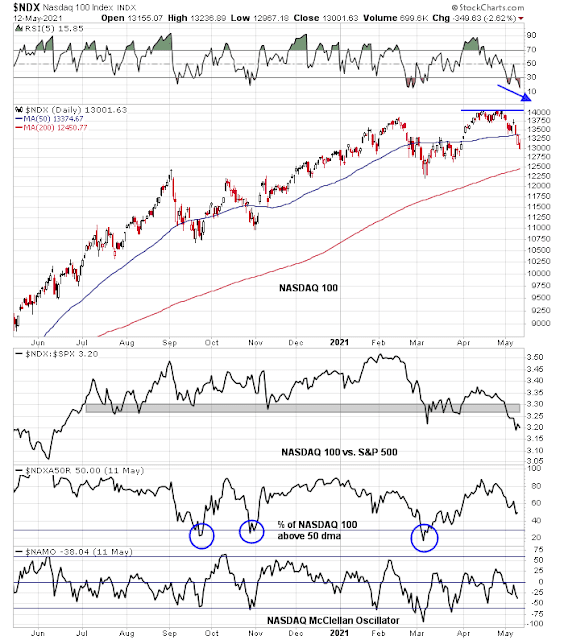 The market was already oversold as of yesterday’s (Tuesday’s) close. Today’s skid will undoubtedly stretch short-term readings further. In all likelihood, the market will bounce tomorrow (Thursday), but how it holds the strength will be a test for both bulls and bears in the coming days. 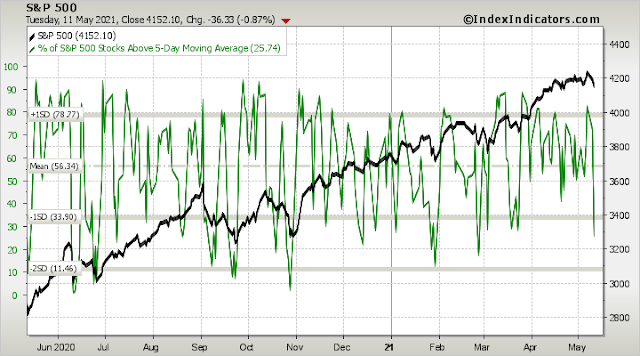 My inner investor remains bullishly positioned. He is not overly concerned about minor pullbacks such as the peak-to-trough downside potential of -4.4% on the S&P 500. However, he has sold covered call options on selected positions. My inner trader is stepping aside. The primary trend is still up, and the risk/reward of trying to profit from a counter-trend correction in a bull market is unfavorable.

21 thoughts on “The bears take control”