Mid-week market update: Normally, this is the time I write a mid-week market update. I arrived back home last night from my vacation after celebrating two New Year’s Eves. We celebrated NYE when we connected through Taipei just as we boarded our flight home, and we arrived on the night of December 31 after crossing the International Date Line to celebrate a second. While I was keeping half an eye on the markets while I was gone, I do not have a full trading analysis just yet.

I do know that there is a growing consensus among traders that the market is melting up. Sentiment is wildly bullish, and the market is poised to fall off a cliff as soon as everyone returns to their desks on Thursday. I would highlight an observation from Ryan Detrick to cast some skepticism on the meltdown scenario. 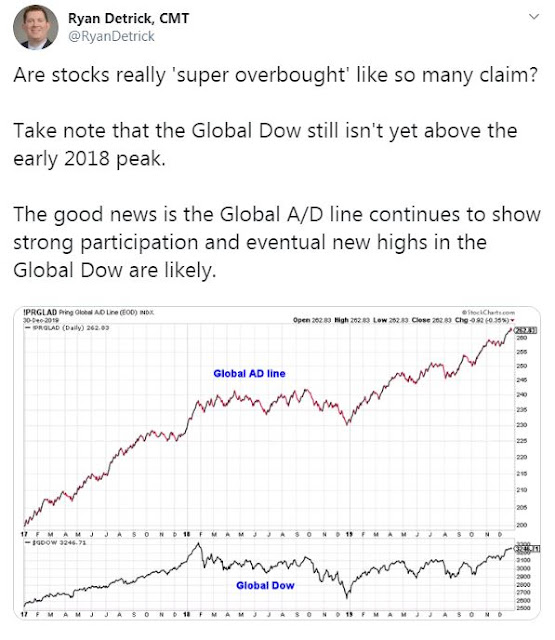 I will have a full analysis to address the issues this weekend. Please be patient.

In the meantime, it is time to assess the Humble Student of the Markets track record for 2019.

Regular readers know that I have two personas, my inner investor, and my inner trader. Here is the track record of my investment calls in 2019. 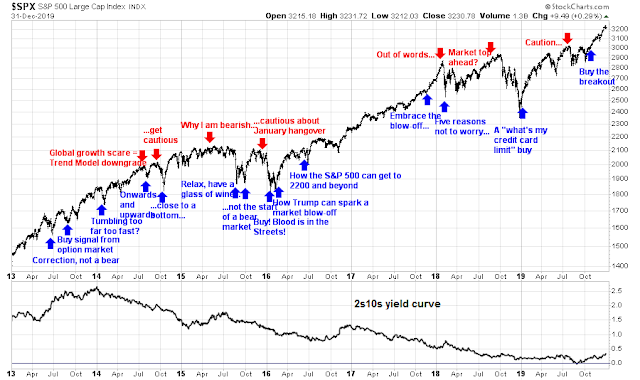 Overall, the general direction of the calls were correct. Soon after the December 24 bottom of 2018, I turned bullish in January as a Zweig Breadth Thrust manifested itself. I turned more cautious during the summer as the yield curve flattened and inverted, though I was not forecasting a recession. At the time, I was anticipating a deeper valuation reset that never arrived. I later turned bullish when the index broke out to new all-time highs.

The excess caution during the summer exacted a cost for my inner investor. As shown on the chart below, the relative return line (blue, bottom) was flat during the year. The Trend Asset Allocation Model returned 22.3% during 2019, which was slightly behind a passive 60/40 benchmark return of 22.6%. 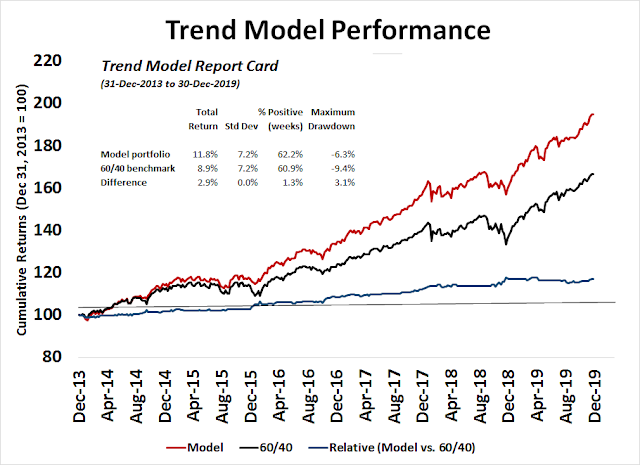 The good news is, even when the Trend Model fails, the results were not bad, and the long-term record is still very strong.

Here is the chart of the trading signals, otherwise known as my inner trader. Even though the trading system caught most of the major moves, it tried to short the market as it moved up in Q1, which did not help returns. It did make some profits as the market bounced around in a trading range during the summer, it did not recognize the upside breakout until it was too late.

My inner trader did made some solid returns in 2019. The hypothetical trading account was up 16.2% for the year, but it lagged the buy-and-hold benchmark, which returned 28.9%. In a market that rises strongly, any attempt at market timing will detract from returns. 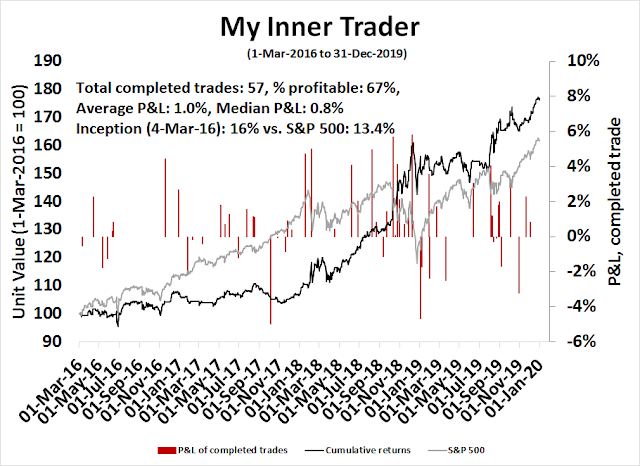 I expect that 2020 should be a more friendly environment for my analytical approach, both for my inner investor and inner trader. The markets are melting up, and they will eventually pull back. In addition, this is an election year, which should also produce some fireworks and volatility. While I believe that US equity market returns should be in the mid to high single digits, the road ahead will be more bumpy.