Assessing the technical damage – Humble Student of the Markets

Mid-week market update: The stock market weakened on Monday when Trump’s early morning tweet indicated that he was slapping on steel and aluminum tariffs on Argentina and Brazil. The sell-off continued into Tuesday when Trump said in a news conference that he was in no hurry to do a trade deal with China, and he was willing to wait until after the 2020 election.

The market was already vulnerable to a tumble two weeks ago when it violated a rising trend line. This was followed by a rally to kiss the daily upper Bollinger Band, but it could not rally above the breached trend line.

The SPX gapped down on Tuesday, but formed what appeared to be a reversal candle, which was accompanied by a mild oversold reading on the 5-day RSI. The reversal was confirmed when this morning when equity future began to bounce back in sympathy with European stocks. The rally was further boosted by a Bloomberg report that “the U.S. and China are moving closer to agreeing on the amount of tariffs that would be rolled back in a phase-one trade deal despite tensions over Hong Kong and Xinjiang”.

How serious was the sell-off? What’s the technical damage?

Let’s begin with the relative performance of the top five sectors of the market. These sectors comprise just under 70% of index weight, and the market cannot move meaningfully without major participation from a majority of these sectors. As the chart shows, the high flying technology sector’s leadership has stalled; consumer discretionary stocks have flattened after a period of underperformance; and two of the five sectors, healthcare and financial stocks, are in relative uptrends. That makes the bull trend a little wobbly, but it does not appear to be the sign of a major bear move. 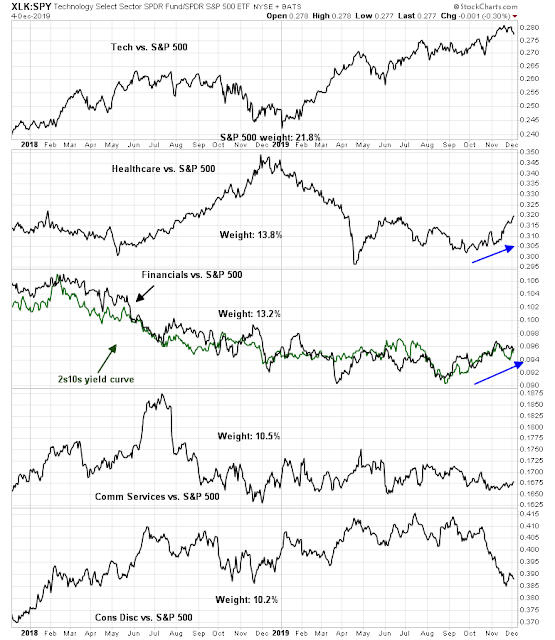 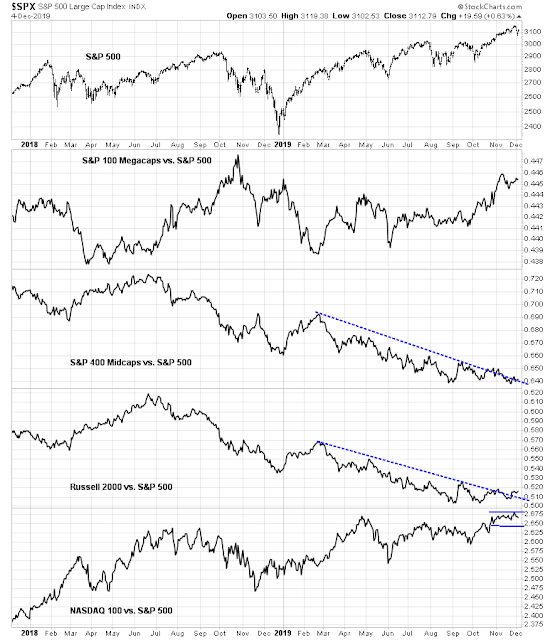 The credit markets are telling a story of stabilization. The relative performance of high yield (junk) bonds to duration-equivalent Treasuries had exhibited a mild bearish divergence, but that gap had largely been filled with the sell-off.

Short-term momentum indicators had reached sufficiently oversold conditions for the market to bounce today. This chart depicts the % above their 5-day moving averages as of last night’s close. 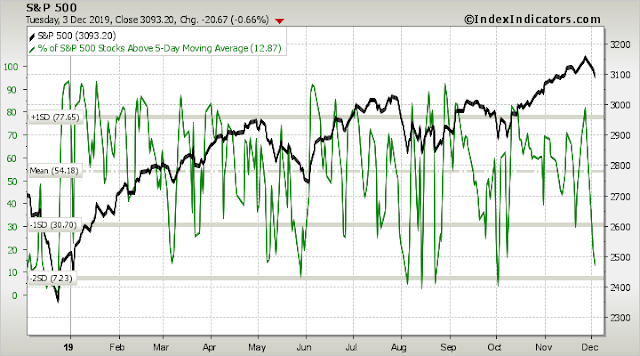 The VIX Index spiked above its upper Bollinger Band on Monday, indicating a market oversold condition, and the signal was further confirmed with the market weakness on Tuesday. If history is any guide, expect a short-term bounce lasting 3-5 days, followed by a pullback to test the old lows, which is not always successful. 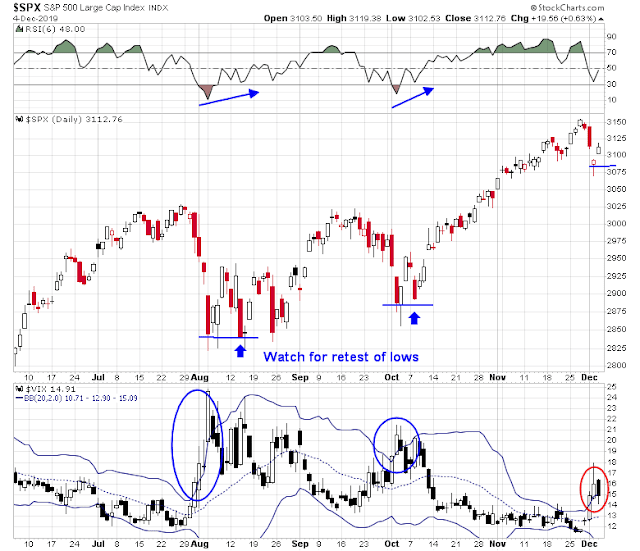 In other words, choppiness ahead. However, seasonality analysis still favors a Santa Claus rally later in the month. Jeff Hirsch at Almanac Trader found that the odds still favor a gain for the rest of December despite a rough start.

My inner investor remains bullishly positioned. Subscribers received an email alert on Monday that my inner trader had initiated a long position in the market. The trading model is now bullish.

1 thought on “Assessing the technical damage”