Is a trade deal imminent? – Humble Student of the Markets

On Friday, Trump said that a trade deal with China was “potentially very close” (via CNBC):

President Donald Trump on Friday said that a long-negotiated trade deal with China is “potentially very close” following reports that an agreement might not be reached until next year.

Trump was speaking on one of his favorite television programs, “Fox and Friends,” the morning after House Democrats wrapped up a second week of public impeachment hearings.

“The bottom line is, we have a very good chance to make a deal,” Trump said.

Over the weekend, CNBC further reported “China plans stronger protections for intellectual property rights”. In addition, Chinese official media said that both sides are “very close to a phase one deal”. Are these signs that the logjam is broken? Are we on the verge of a “Phase One” deal?

Why haven’t the odds of a Trump-Xi meeting moved on PredictIt? This contract is a good, albeit illiquid, proxy for the odds of a “Phase One” deal. Let us dissect the rhetoric from both sides. We have heard the “we are close to a deal” statements from Trump and Trump administration officials before. But here we are, we still have no deal. Is it any wonder the market hasn’t reacted?

The announcement form China is more interesting. However, I am equally skeptical because of the Chinese attitude about the concept of the rule of law. Consider these tweets from Global Times editor Hu Xijin in reaction to the Hong Kong High Court’s ruling on the the mask ban. 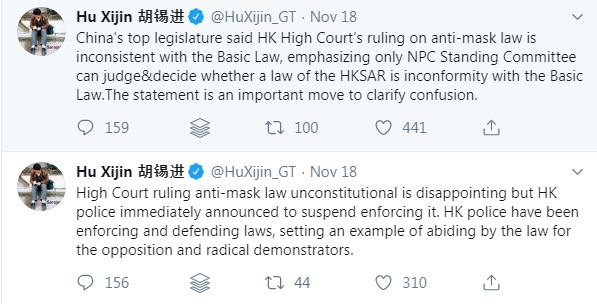 Here is what the principle of rule of law means for the Chinese. They expect the people to obey the law. The government is not bound by its own laws, because it is the government, and the sovereign.

So what happens when intellectual property laws are applied to State Owned Enterprises, which are arms of the government? (Asking for a friend).

Now do you understand why the market isn’t reacting to these announcements?

2 thoughts on “Is a trade deal imminent?”