For years, I have been publishing the readings of my Trend Model on a weekly basis. As a reminder, the Trend Model is a composite model of trend following models as applied to global stock prices around the world, as well as commodity prices.

The model has three signals:

The first derivative of the Trend Model, i.e. whether the signal is getting stronger or weaker, and combined with some overbought/oversold indicators, has performed admirably as a high turnover trading model (see My Inner Trader and this ungated version for non-subscribers). However, I have never produced a full report card for the Trend Model. While the actual signal dates were always available on the website, I never got around to compiling the performance record because I was always tied up on other projects, and the task never got to the top of the pile.

After several repeated requests from readers, here is the report card of the Trend Model. I want to make clear that this study represents the real-time track record of actual out-of-sample signals. These are not backtested. The results were solid, and the analysis was also revealing about what an investor should expect when using this model for asset allocation.

The chart below maps the history of the signals. Buy signals are marked by vertical green lines, neutral signals by black lines, and sell signals by red lines.

The high turnover experienced in the first couple of years was disconcerting, and it was mainly attributable to the relatively flat and trendless market of those years. But that is a feature, not a bug, of trend following models. They have a tendency to get whipsawed and do not perform well in a flat trendless market. In response, I made some minor tweaks to reduce the turnover, and to add overbought/oversold filters so that it doesn’t chase markets when they are at emotional extremes. The model has largely unchanged since mid-2015.

As the model signals were published weekly, here are some simplifying assumptions I made to measure performance.

How not to use the model

With those assumptions in mind, here are some ways to use and not to use the model. First, I would encourage readers not to use it as a trading model. We already have a high frequency trading model that has worked well (see My Inner Trader and this ungated version for non-subscribers).

That said, here is how the Trend Model has performed as a trading model, based on these assumptions:

How would that have performed against a simple 60/40 passive portfolio of 60% SPY and 40% IEF, which was rebalanced weekly? The chart below tells the story. While the long/short portfolio did beat the 60/40 benchmark, it exhibited a higher level of risk, as measured by standard deviation and maximum drawdown. As well, relative performance (light blue line) was highly volatile. 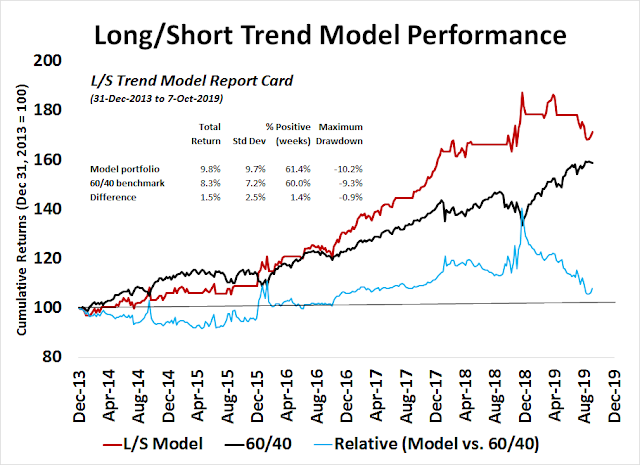 First lesson. This is not a trading model. This is an asset allocation model.

As the Trend Model is an asset allocation model, I used these assumptions to measure its performance: 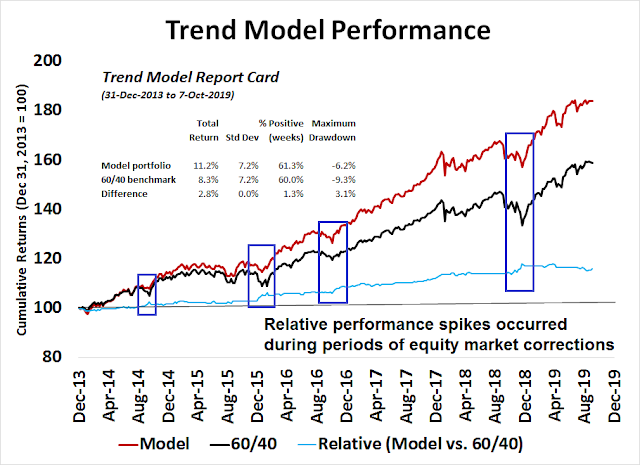 Further analysis of the relative performance line (light blue) reveals the difference. While the trend of outperformance was relatively steady and upward sloping over the test period of over five years, there were several spikes in relative returns. These spikes tended to occur during periods of equity market corrections. Simply put, the Trend Model was able to offer better downside protection during bear phases, and maintain relative performance during bull and neutral phases of the equity market.

This test of the Trend Model was based on a set of reasonable assumptions. In particular, the allocation was based on a +/- 20% band around a classic 60/40 balanced portfolio. that can be easily implemented by investors, and by portfolio managers while adhering to the typical risk tolerance monitoring regimes of their firm’s Compliance Department.

This study was a proof of concept that the Trend Model can form an invaluable way of enhancing returns to a portfolio while reducing realized downside risk. As each investor will have different choices of investment vehicles, and differing benchmarks, your mileage will obviously vary.

I will be updating the track record of this model on a monthly basis at Trend Model report card.