Our trade war factor has been heating up, though readings remain in neutral. A secondary index (red line) measures Sheldon Adelson’s Macau casinos operator LVS against other gaming stocks (inverted). As Adelson is a major Republican donor, and the casino licenses expire in 2022, the licenses represent another form of backdoor pressure that Beijing can apply to trade relations. 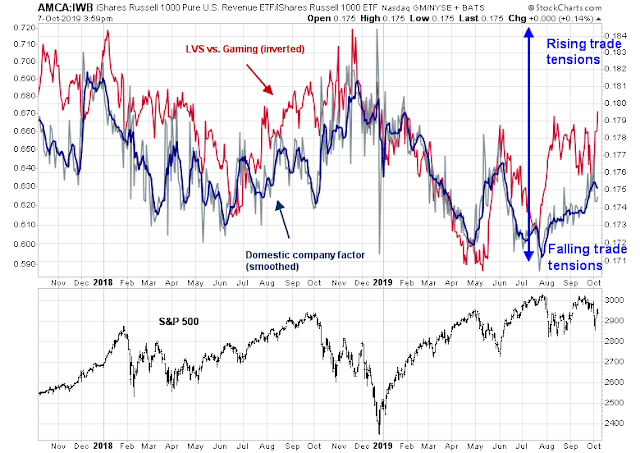 Chinese and American negotiators are scheduled to meet again on Thursday, October 10 for another round of trade negotiations. There have been conciliatory gestures on both sides, but what are the chances of a deal?

What does Trump really want?

It is difficult to see how a comprehensive deal could be agreed on, as it is highly unclear what Trump really wants. On one hand, the transactional Trump is focused on narrowing or eliminating the trade deficit by bring back manufacturing back to American shores. On the other hand, Navarro has long complained about China’s business practices and industrial strategy of favoring domestic and state owned companies, intellectual property theft, and the ability of foreign companies to operate in China.

Imagine if we were to wave a magic wand and Navarro got all of his wish list. China’s economic access restrictions disappears, and the economy becomes fully westernized. It would encourage an offshoring stampede in light of their cheap labor costs. The trade deficit would rise, not fall.

What does Donald Trump really want?

A technological iron curtain?
In addition, Hal Brands wrote a Bloomberg opinion piece that US trade practices are affecting western leading countries in Asia. He cited Singapore as an example. Singapore is officially neutral, but it is “a partner that acts like an ally”:

Singapore has pulled off a shrewd balancing act in a contentious neighborhood. Singapore’s dynamic economy has been buoyed by Chinese trade and investment, and its population is mostly ethnic Chinese. Yet getting too close to a powerful China can be dangerous, so Singapore’s government has long viewed Washington as a critical counterweight to Beijing’s power. As that power has increased in recent decades, so has Singapore’s security cooperation with the U.S.

Singapore’s armed forces regularly train with (and in) the U.S., and Singapore hosts the U.S. Navy’s Logistics Group Western Pacific as well as deployments of littoral combat ships and P-8 maritime surveillance planes. U.S. aircraft carriers conduct port visits in Singapore, a visible reminder that Washington takes an interest in the country’s security. Singapore remains officially neutral; unlike the Philippines, it does not have a treaty relationship with the U.S. Yet if the Philippines is an ally that acts like a partner, as a senior U.S. official once put it, Singapore is a partner that acts like an ally.

If Trump were to continue on the current course of action that decouples China’s economy from the rest of the world, America’s partners and allies will have to choose sides.

The trend toward seeing the U.S.-China competition as “a conflict between two systems, almost two civilizations” is “very worrying,” he said. The U.S. should not delude itself into thinking that pressure can bring about the collapse of the Chinese Communist Party; it should bear in mind that an economic and technological divorce between the world’s leading powers would create an impossible situation for America’s friends “so deeply enmeshed with the Chinese.” If the U.S. insists that these countries choose sides, it might not like the results: “Where is your part of the world, and who will be in your system?”

At the same time, Lee acknowledged that China’s behavior has become more truculent, due to rising geopolitical ambitions and growing internal difficulties. He also argued that China can no longer act like a developing country, but must bear its “share of responsibility upholding and supporting the global system” that has made it so rich and powerful. If a disastrous geopolitical showdown is to be averted, “statesmanship, consistency, perseverance and wisdom” will be required from both sides.

The prospect of a “technological iron curtain” coming down in the Pacific will have devastating effects on growth, not just in the US, but for the Asia-Pacific region.

A larger confrontation with China will be economically painful for U.S. — but it could be economically devastating for America’s key allies and partners in the Asia-Pacific, all of which are deeply interdependent with Beijing in commercial, financial and technological terms. The prospect of a technological or economic Iron Curtain coming down is alarming for countries whose economic interests pull one way while their security interests pull another. To be sure, the U.S. can’t compete successfully with China unless its friends become less dependent on Beijing: Some selective de-coupling from the Chinese economy is important, even if wholesale de-coupling remains implausible. Yet the only way to get countries such as Singapore to reduce their dependence on Beijing is to vastly deepen the possibilities for economic, financial and technological integration within the U.S.-led coalition. Here, America presently seems like an uncertain partner, at best.

Here is one example of just one incident of how tensions have hurt American businesses. Houston Rockets GM Daryl Morey recently tweeted support for the protesters in Hong Kong. 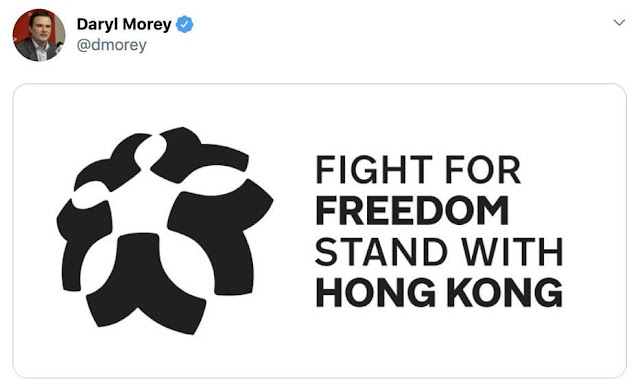 In response, China cut off all cooperation with the Rockets. This was an enormous blow to the team, as the Rockets was the second most popular team in China behind the Warriors. Hall of Famer Yao Ming played for the Rockets and popularized basketball in China. Tencent, the NBA digital rights holder in China, blacked out the broadcast of all Houston Rocket games. As a measure of the importance of China to the league, an NBA press release in July had announced a five-year expansion of the Tencent-NBA partnership that is worth $1.5 billion, and reported that 490 million Chinese fans, which is more than the size of the US population, watches NBA games on the Tencent platform.

The NBA issued the following statement as a way of trying to repair the situation. Regardless of whether you support or oppose the NBA’s position, remember the league’s business is making money, and not politics, so it is understandable that it took the steps it did to mitigate the damage.

“We recognize that the views expressed by Houston Rockets General Manager Daryl Morey have deeply offended many of our friends and fans in China, which is regrettable. While Daryl has made it clear that his tweet does not represent the Rockets or the NBA, the values of the league support individuals’ educating themselves and sharing their views on matters important to them. We have great respect for the history and culture of China and hope that sports and the NBA can be used as a unifying force to bridge cultural divides and bring people together.”

As another example of forcing allies and partners to choose sides, Bloomberg reported that Chinese students are increasingly avoiding American schools, and they are looking elsewhere. At at minimum, expect America’s current account with China, which measures services as well as goods, to fall.

“There is a shift,” says Jerry He, executive vice chairman of Bright Scholar Education Holdings Ltd., based in the southern Chinese city of Foshan. Bright Scholar in the past year has purchased more than a dozen boarding and language schools, with U.K. campuses in Cambridge, Canterbury, and London. “With the tensions between the two countries, things that have happened in the news made some Chinese parents hesitant, and they have had second thoughts about where they will send their kids.”

Much is at stake for U.S. institutions, many of which have welcomed the influx of Chinese students, who typically pay full tuition. Chinese students in the U.S. generated $22 billion in total economic impact last year, according to Rahul Choudaha, executive vice president of global engagement and research at Studyportals, a consulting firm headquartered in the Netherlands.The realignment will undoubtedly crash Asian growth rates and cause a regional recession. Without knowing the actual timing, and effects, it is impossible to forecast whether it could also cause a US recession as well.

Is this what Donald Trump wants?

The Chinese have very likely to interpret recent events as weakening Trump’s political position, which will harden their negotiating position and makes it unlikely for them to give much in the way of concessions. They will see the combination of the House’s impeachment investigation, and Trump’s recent public call for China to investigate the Bidens of his deteriorating clout.

In addition, October 10, the date of the negotiation, holds a special meaning in Chinese history. It was the date of the Sun Yet-sen’s uprising that ultimately toppled China from imperial rule. While the anniversary is more observed in Taiwan than Mainland China, it nevertheless.represents a key date in Chinese history, and negotiators are unlikely to concede much on a historic date like that.

Bloomberg reported that Chinese negotiators are preparing to come to the table with a mini-deal:

Chinese officials are signaling they’re increasingly reluctant to agree to a broad trade deal pursued by President Donald Trump, ahead of negotiations this week that have raised hopes of a potential truce.

In meetings with U.S. visitors to Beijing in recent weeks, senior Chinese officials have indicated the range of topics they’re willing to discuss has narrowed considerably, according to people familiar with the discussions.

Vice Premier Liu He, who will lead the Chinese contingent in high-level talks that begin Thursday, told visiting dignitaries he would bring an offer to Washington that won’t include commitments on reforming Chinese industrial policy or the government subsidies that have been the target of longstanding U.S. complaints, one of the people said.

That offer would take one of the Trump administration’s core demands off the table. It’s emblematic of what analysts see as China’s strengthening hand as the Trump administration faces an impeachment crisis — which has recently drawn in China — and a slowing economy blamed by businesses on the disruption caused by the president’s trade wars.

Will Trump accept a mini-deal? He is on record as only entertaining an all encompassing deal, but he has been known to change his mind in the past.

However, consider the following political calculation. Trump’s attacks have weakened Joe Biden, who has been the front runner for the Democrat’s nomination for president. As well, Bernie Sanders’ medical difficulties have also lessened his chances for securing the nomination. This leaves Elizabeth Warren a clear shot at becoming Trump’s opponent in 2020. Warren has outlined her own brand of economic nationalism (see What would an Elizabeth Warren Presidency look like?), and she would shred Trump with his supporters if he were to conclude any weak mini-deal with Beijing. 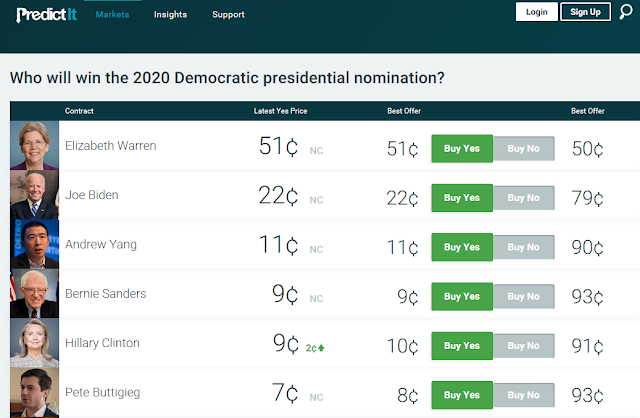 In conclusion, expect platitudes, and some possible signals of progress. At best, the scheduled increases in US tariffs will be delayed. Don’t expect any breakthroughs. Trump is too boxed in to make a deal with Xi.

3 thoughts on “The Art of the Deal (with Chinese characteristics)”