USDCNY at 7? It’s not you, it’s me – Humble Student of the Markets

The market has adopted a risk-off tone today because the Chinese yuan rose above the rate of 7 to 1 to the USD. The move was positioned as retaliation for Trump`s new tariffs. In addition, China has halted all purchase of American agricultural goods. 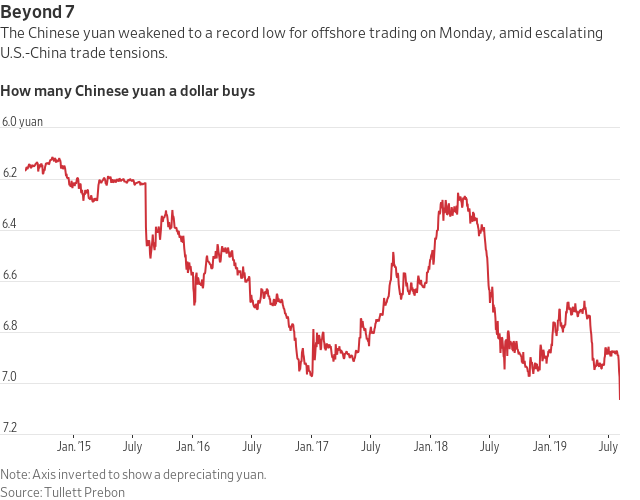 What did you expect? The controlled depreciation of CNY is not unexpected. The chart below of the Chinese yuan ETF shows that it had been unusually strong compared to the trade weighted dollar. Viewed in this context, the PBOC devaluation in 2015 was fully justified. Today’s fall is reflective a decision by the PBOC to stop leaning against the market winds. 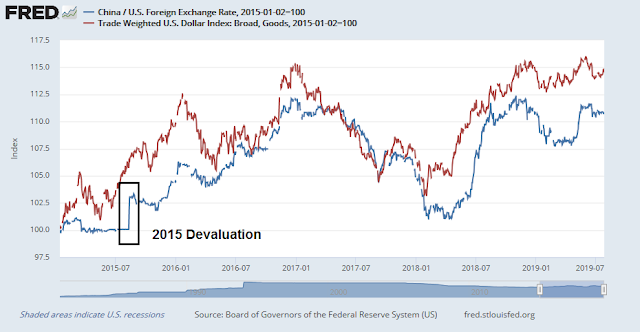 To put it differently, the broader problem isn’t CNY weakness, but USD strength.

To be sure, there is some validity to the trade retaliation thesis for CNY weakness. John Authers at Bloomberg published this analysis on May 20, 2019 from Deutsch Bank. The latest tariff regime argues for an offsetting USDCNY rate of 7.41. 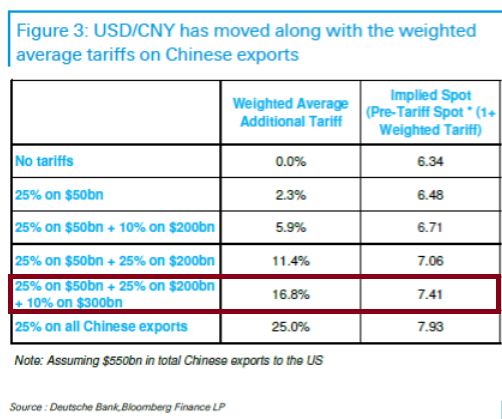 Seeing USDCNY blow through 7, however, is attributable mainly to USD strength, not trade tensions.

As I pointed out recently (see Is this how currency wars begin?), the USD Index has staged an upside breakout out of an inverse head and shoulders formation. Since I penned those words, the USD has rallied further and it is nearing its short-term upside target, and EURUSD is nearing its downside target. 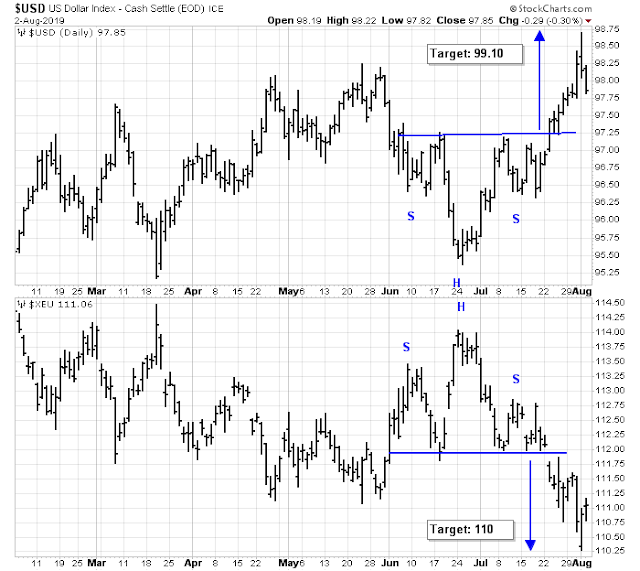 In addition, the weekly chart of the USD shows an upside breakout out of a longer term cup and handle pattern, with considerable upside potential.

The weekly point and figure price chart is projecting a measured move to 112.86. 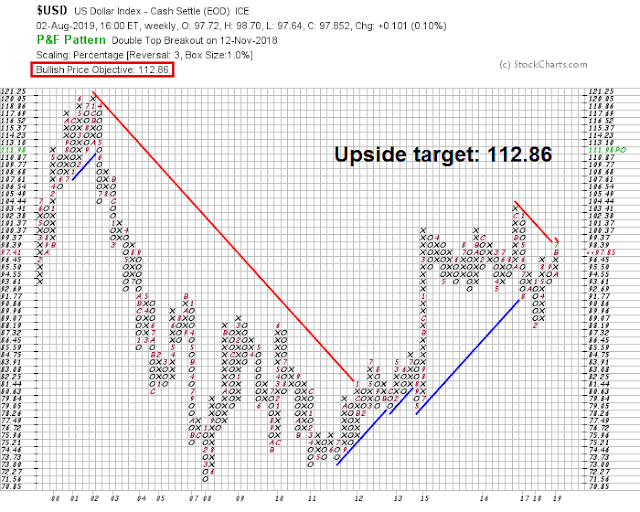 This development, along with the Fed’s failure to cut rates by a half-point instead of a quarter-point, is undoubtedly a source of consternation for President Trump. It is well-known that Trump would like to see a weak greenback, which makes US exports more competitive. But what is the price of a weak dollar, and what would it cost him to achieve such an outcome?

The strength of the USD is creating stress in the global financial markets. EM currencies have been falling, and that will put pressure on weak EM currencies with large current account deficits and foreign currency funding, such as Turkey and South Africa.

Bloomberg reported that a dollar funding squeeze is spreading around global markets. 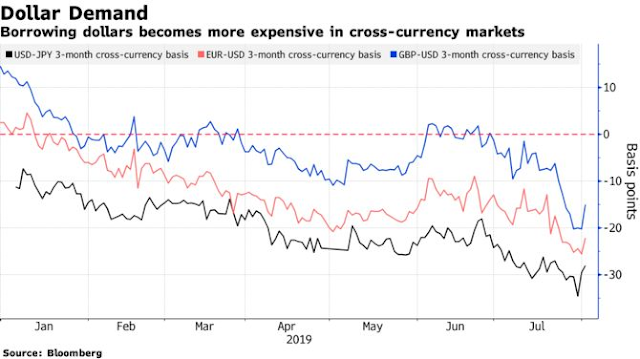 Why I fully understand why Trump wants a weaker USD, his options to force the dollar down are limited.

The most direct method is foreign exchange intervention, but in the absence of agreement from major foreign central bankers, the US Treasury’s firepower is highly limited, and any attempt at intervention will not be seen as credible by the FX markets.

Trump could lean on Jerome Powell and the Federal Reserve to ease further, and in a more forceful manner. Falling rates would narrow the interest rate differential between dollar assets against the EUR and other currencies. Everything else being equal, it would put downward pressure on the USD.

That course of action is limited by his direct ability to control FOMC decisions. Boston Fed president Eric Rosengren was one of the two dissenting votes on the decision to ease by a quarter-point. Rosengren took the unusual step of publishing a series of charts to justify his decision.

In other words, there are plenty of reasons to oppose a rate cut, and the two dissenting votes were signs that Powell was having difficulty on achieving a consensus to lower rates. In that case, it will be even more difficult for Trump to manhandle the Fed.

While Trump’s reasoning for a weaker currency are purely tactical, Bloomberg pointed out that there has been no discussion of the strategic issues of the reversal of the US Treasury’s long-standing strong dollar policy.

The strong-dollar dogma was introduced by then-Treasury Secretary Robert Rubin in 1995 as a way to bolster foreign demand for U.S. Treasuries, and it helped cement the dollar’s long-standing status as the world’s reserve currency of choice. The pledge to not devalue the greenback encourages international investors and U.S. trading partners to park their cash in U.S. assets.

A weaker dollar would offer some benefits. U.S. manufacturers would get a leg up in selling their products abroad—their wares would become cheaper for foreign customers. At the same time, American companies and people buying imports would see prices rise. Abandoning the policy would also have implications for global markets and, in the long run, for U.S. government finances. Foreigners’ faith in the dollar makes them more willing to hold U.S. debt, bringing down the interest rates the Treasury Department must pay.

Should Trump decide to abandon the strong dollar policy, he will undoubtedly reap some short-term benefits as the currency weakens, but the US Treasury will soon be running trillion dollar deficits in the near future. Who will fund all that debt? How much will bond yields have to rise to compensate for the weaker USD?

Trump’s nuclear option for weakening the USD would be to try to either sideline or fire Jerome Powell. The USD would crater, but so would stock prices.

There is a price to be paid for everything.